Pic d'Asti 3219 m is a pointed yellowish pyramid belonging to the Cozie Alps and located at the end of the Val Varaita near Colle dell'Agnello, an high road pass between French and Italy. The exact location is between the Colle della Rocca Rossa and the Col d'Asti along the main alpine watershed. The mountain, very close to Monte Viso, is shared between the Valle Varaita (Italy) and the Vallée du Guil (France). Together with the Pan di Zucchero and the Rocca Rossa, the Pic d'Asti forms a triptych of peaks that dominate the last stretch of the road rising from Chianale in Valle Varaita to Colle dell'Agnello. The Pic d'Asti is the highest of these three peaks and is a very well identified mountain, with steep slopes and without weak sides allowing an easy access.

Because of its height and also its position, it allows an excellent panoramic view of the alpine chain, with a particularly spectacular view of the nearby Monte Viso. From a geological point of view, it consists of crystalline limestone. The toponym "Asti" derives from the Provencal "asta" (or "Lasta"), with the meaning of smooth stone.  The standard route to reach the summit follows the South East ridge starting from the Col d'Asti. This route is not a difficult climb (maximum III + UIAA) but in any case a fairly aerial itinerary that requires the progression on the rope and the knowledge of mountaineering techniques as well as the use of equipment for insurance and rappelling.

The Normal route to summit Pic d'Asti starts from Col d'Asti 3123 m, located at the base of the peak on the border crest between Italy and France. On the Italian side the path to approach the Col d'Asti starts along the road that from the village of Chianale in Valle Varaita rises towards the Colle dell'Agnello, a high border road pass.

Road access From the A6 Torino-Savona motorway exit Bra-Marene and take the road to Savigliano, Saluzzo and Valle Varaita (road n. 8). Once you enter the Valle Varaita, drive to Sampeyre and Casteldelfino, overcoming different villages. At the junction in Casteldelfino ignore the left toad to S. Anna di Bellino and take the road on the right to Pontechianale and Chianale, getting to Chianale, the last inhabited village in the valley. From Chianale we proceed driving along the road rising with many hairpin bends in the direction of Colle dell'Agnello. In a straight line you can find a dirt parking on the right of the road at an altitude of 2560 m, right near the small Lago del Pic d'Asti.

From the pond take a path on the right rising up a grassy hill crossing the undulating grazing slopes. Skirting a rocky ridge, the path enters the Vallone del Giarus, entirely occupied by a vast extension of stones and blocks and dominated by the beautiful pyramid of the Pic d'Asti. Following some small cairns you can climb directly to the stony ground with less tiring than it may see or alternatively cross it slanting to the right, always following some cairns. In both cases, however, you climb to intercept on the right edge of the wide scree a well-traced path rising with several serpentine the upper part of the valley up to exit to the magnificent panoramic Col d'Asti at 3123 m on the border crest between Italy and France (pole and cairn).

Here it opens a spectacular panorama: towards Italy on Roc della Niera, Rocca Bianca and Mongioie, Rocca La Marchisa and on the highest peaks of the Maritime Alps, while on the north side to  the nearby Crete de la Taillante and far more distant the alpine groups of Mont Blanc, Monte Rosa, the Matterhorn and Gran Paradiso. Just in front of the spectacular Monte Viso.

At the comfortable saddle it is useful to prepare yourself with harness and rope for the ascent marked by faded green signs. From the Col d'Asti we head to the left following a track that bypasses on the right (French side) along a short debris gully the spire called Torrione Gina.

Once you reach the base of the gully, climb it on the left, keeping close to the wall of the Torre Gina, cross briefly to the right and climb a short wall (II degree) exiting to the stance above the gully (stop with cable). With other short climbing moves (II+) you reach the small saddle between the Torrione Gina on the left and the Pic d'Asti on the right, where there is a comfortable belay. We surround a large boulder and continue to the right climbing up some rocky steps to reach the base of the South-East ridge of the Pic d'Asti. At the base of the ridge there are two possibilities:

A)  Climb directly up the ridge above, steeper but equipped with pegs. Advisable solution: fun climb (III grade) with good holds and good rock

At the base of the summit wall head to right and climb up directly (steps of II/II+, pegs in the most exposed point) to take the SE ridge reaching a terrace on the ridge with a steel cable. From this belay traverse to the right for a few meters up to a small terrace. From here climb up directly the steep wall above but with excellent holds until you reach the edge again to the left. Continue along the ridge now more easily until a new belay with a steel cable. Continue along the ridgeon large blocks, with airy but easier climb, and after a last big block reach the big summit cross with the summit book on the superb summit of Pic d'Asti.

At the base of the summit wall follow a ledge on the left side reaching the base of a small gully with some loose rock. Climb up the gully leading to a small notch.  From here climb a slab on the right and then always to the right along a diagonal ledge leading on the SE ridge line. Climb a dihedral to exit on the terrace with a steel cable. From here same description as in the previous point

Descent: downclimb for about 20 meters on the ridge to get the belay on a steel cable, then with a 35 meters rappel on the Italian side (on the right facing out) reach the easy ledge at the base of the summit wall. From here you return on the same route downclimbing to return to the Col d'Asti.

No particulary restrictions in hiking and climbing.

Other kinds of accomodation in upper Valle Varaita: bed and breakfast and agriturismo 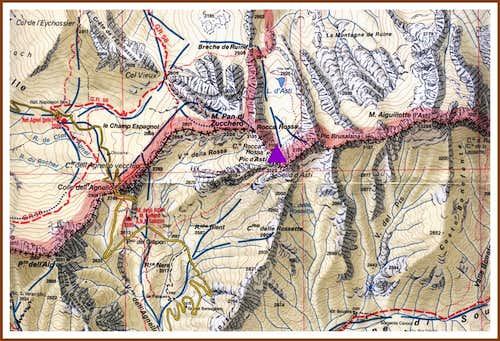