It's a very wide area with some independent massifs very differents. The valley of Alto Aragón (around the river Aragon) or valley of Canfranc is very humanized with ski-resorts, villages, forest tracks... generally the access to trailheads of mountains is very good but the nature is less "wild" with some degradations of the terrain.
The main city is Jaca but the historic village is Canfranc, very near of the line of mountain chain. 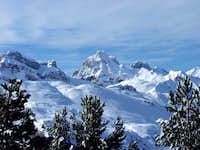 The first massif from the west of valley of Canfranc is the little range of Bernera joins with the massif of Aspe with a lot of important mountains around it. The impressive Aspe has a spectacullar north face in winter over the ski resort of Candanchu.
-The most important mountains: Llana del Bozo (2570m), Llana de la garganta (2580m), Aspe (2645m), Borau (2561m), Lecherín (2567m), Peña Blanca (2180m).
Full list of all the peaks over 2000 meters of the massif: 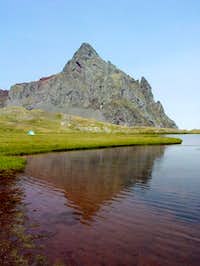 In the french side of the valley we have the peaks Hourquette (2384m) and Pic des Moines (2352m). The Pic des Moines is in the same massif of this mountains and it has almost full route in the valley of Canfranc (spanish side) but the summit is a few of meters in the french side and for this reason it doesn't appear in the list of peaks of the valley.
Full list of all the peaks over 2000 meters of the massif: 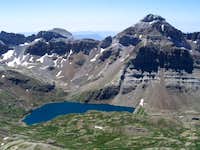 Collarada is the highest and most important mountain of valley of Canfranc surrounded but the special cirque of Ip. 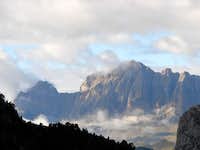 The range of Partacua is a long and individualizated line of summits at south of the valley in the border with valley of Tena with the great presence of Peña Telera. It's possible the adscription to both valleys (Tena or Canfranc).