The estructure of the range: Los Pirineos \Les Pyrénées (Range)>Area or valley>Massif or Group (if it exists)>Peak Note to the people that want to write a new peak, a new hut or a new canyon in the range of Pyrenees: you must attach the peak / hut / canyon in the area and as well in the massif or group if it exists but not to this page. If the area doesn't exists you can send me a message to make it in the future or create yourself. As well you can attach the peaks or huts without area in this page and I'll know the area to create in the future but it's not logical to attach all the objects to this page. It's only to a little time. Only the areas must be attached to this page (it's easiest to find the peaks in the same trip or holidays in a zone). The routes must be attach only to its peaks or areas except the stages of GR-11 or GR-10, the long traverse of full Pyrenees. The trip reports are welcome if you visit several peaks in different areas. If you have visited only one area it's better to attach the trip only to the area. The articles about the range are welcome as well in this page. Images: An image of a new peak, lake, hut, range... is welcome, but please don't add more images of the same peaks or lakes because it's impossible to search a picture among more than 200. I lose a lot of time desattaching duplicate images. The gallery of the areas and peaks is the better place to add a new image (if all the people attach the 10,000 images about Pyrenees to this page the gallery will be impossible to see). Examples: The peak Marboré is attached to Ordesa-Gavarnie and also in the group (subrange) Cirque de Gavarnie. The peak Aneto is attached to Benasque and also to Maladeta Massif. Maladeta Massif and Cirque de Gavarnie are groups or massifs and they're attached to Benasque and Ordesa-Gavarnie, not to this page. The peak Perdiguero is attached to Benasque but it doesn't appear a group or massif, it's only attached to the area. In many occasions the peak is frontier between France and Spain and it have routes in both areas, as Perdiguero, La Munia or Robiñera, and they're attached to both areas (the peak always appears in an area in that the route is possible). Areas of range (the areas without link doesn't exist for the moment in SP). The list is according generally with the editions of the maps most populars in scale 1:50.000: Spanish side (with name "Pirineos: area"): -Bidasoa-Baztan -Roncesvalles-Irati -Belagua-Hecho -Canfranc -Tena -Ordesa-Gavarnie ---Cirque de Gavarnie -Bielsa -Benasque ---Maladeta Massif -Aran-Aiguestortes -Pallars-Pica d'Estats in construction -Cerdanya / Cerdagne --Serra del Cadí -Núria-Puigmal -Tec-L'Albera -Cap de Creus Andorra (it's an independent country with only one area). -Andorra -on adoption- French side (with name "Pyrénées: area"): -Pays Basque West (Labourd-Basse Navarre) -Pays Basque East (Barétous-Soule-Basse Navarre) -Béarn ---Vignemale Massif (attached to Ordesa-Gavarnie and Tena as well) -Bigorre -Luchon -Couserans -Haute Ariége -Cerdanya / Cerdagne -Canigó -new- -Roussillon-Côte Vermeille This map is under construction.... (thanks to visentin for the map) View Pyrenees in a larger map Pre-pyrenees (South) -Prepirineo navarro -Prepirineos aragoneses. -Catalan Prepirineu Afficher Jacetina sur une carte plus grande

Urkulu
The name and the legend: The name of this mountain chain comes from the nymph Pirene. According to the legend she died of a sorrow on having seen to go away to Hercules, the Greek semigod of the mythology. When Hercules returned he shouted of anger calling his ear one: Pireneeee! (origin of the name Pirineos or Pyrenees). Some of them say that the mausoleum that he constructed is in the summit of mount Urkulu in Navarra (though more it look like the ruins of a roman tower).

The Pyrenees constitute the mountainous chain of 440 km that separates France and Spain. The approach of each massif is in the page of the mountains. Provinces (from west) of the three countrys: -Spain: Pais Vasco (Guipuzcoa), Navarra, Aragón (Huesca), Cataluña / Catalunya (Lleida, Barcelona, Girona). -France: Pyrenèes Atlantiques, Hautes Pyrenèes, Haute Garonne, Ariège, Pyrenèes Orientales. -Andorra: small country without provinces. The chosen name of the geographical titles to group the massifs in the list is a reference since there is not an "official" classification for group the mountains, but it's the one that follow many books on the mountainous chain. Placing a mountain that is limit between 2 zones in an or another is arbitrary, really it's in both areas even some mountains are difficult assigning to a group. The election of the representative mountains of each zone is personnel, and I have carried out it for importance and beauty. 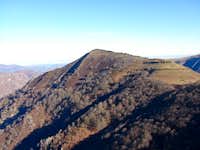 Irubelakaskoa
-Bidasoa: the first valley from the west is the valley of river Bidasoa with a lot of green hills (except the granitic Peñas de Aia).

Larrun
-Mountains: Jaizkibel (547m), Peñas de Aia (837m), Larrun (900m). -Baztan-Roncesvalles / Errobi: the most extensed valley of the Pyrenees of Navarra. The river Baztán it's named Bidasoa in the neighbor valley. Generally the little valleys of Aldudes and Baigorri are included with this valley in books and maps. Roncesvalles has the historic pass across the Pyrenees on Ibañeta (the trail of Santiago, the battle of Roland,...) 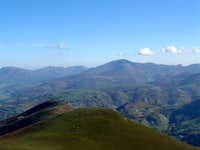 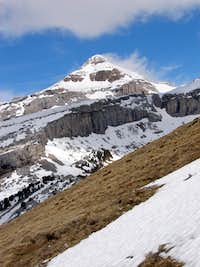 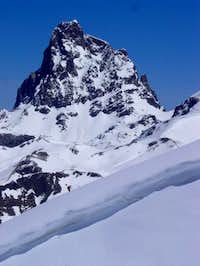 Note: for this page I've divided easily in this way, but generally many people say that Eastern Pyrenees are more in the east (after Andorra) and the highest point is Carlit. 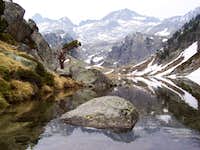 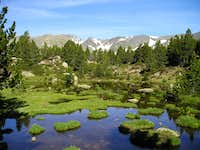 GR="Gran Recorrido" (Great Itinerary or Great Trail). The great path of red-white painting across all the Pyrenees from west to east (or east to west) in approach 35-45 stages (days) with two options, the GR-10 in France (north) and the GR-11 in Spain (south). Generally the stages in Spanish territory go on the mountain refuges (reservation obligated) and in French territory go across villages. The option of the full great itinerary is difficult but many people make some stages in different week-ends or years for enjoy of the landscapes. Generally the path doesn't traverse the main peaks, it follow the easier itinerary to connect the stages. The GR-11 Trail project: other of the reason to make this page is the posibility to write some information about this important route. My friend "eza" and me we'll write the stages in 5 or 6 parts. Our intention is make the full trail with the next index: -GR11-Trail (I): Cabo Higuer-Zuriza-"The green Mountains". -GR11-Trail (II): Zuriza-Panticosa-"The Limestone Ranges". -GR11-Trail (III): Panticosa-Espitau de Vielha-"The Kingdom of Three-thousands". -GR11-Trail (IV): Vielha-Ref.Baiau-"The Last Giants". -GR11-Trail (V): Ref. Baiau-cap de Creus-"The Mediterranean Mountains". I think that we will complete the project someday and probably not in the correct order...be patient with us!

Summer time is the best epoch (june to september) in the majority of summits.

Does summitpost have any information on the Pyrenean Haute Route?

not for the moment. I will try to finish some day GR-10 and GR-11, but I don't know when I will do. The HRP is not in my plans, I'm sorry Wiktoria. I think this link is very interesting but the text is in French (only you can choose English for the titles and menus): http://a-pyrenean-story.pagesperso-orange.fr/hrp-eng.htm you can try to traslate with google maybe... because the information is very very good (I know the places and the information is correct). good luck

Thanks for the info, the French shouldn't be too bad I've taken 6 years :)! Maybe I will make a page is I complete it....