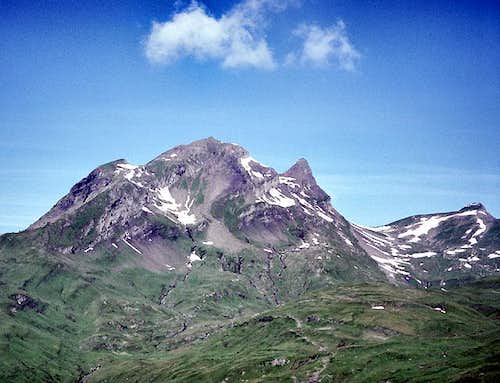 Reeti / Rötihorn (L) and Simelihorn (the small rocky horn) from the west. The small pak to the right is Faulhorn. 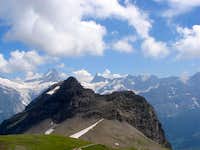 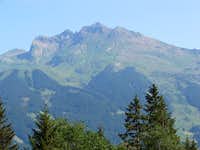 Reeti (2757 m) , which appears in some references and on some maps as the Rötihorn, is a high peak in the Berner Voralpen (Bernese Forealps) located nearly directly above Grindelwald to the south. The Simelihorn (2751 m) is a rocky horn located immediately south of Reeti. It is connected by a low saddle and is arguably part of Reeti rather than a truly independent summit. It is, however, a named peak on most maps, a much more difficult point to reach than Reeti, and a worthwhile objective. The summit of Reeti is reached with little difficulty via a unmaintained trail up its southeast ridge. Other aspects of the peak are guarded by very steep talus, snow, and broken cliff bands. There is no hiking route to the summit of Simelihorn. A traverse of both peaks from west to east is an excellent day trip.

The easiest and most logical approach to Reeti & Simelihorn is by easy trail from the top of the First Gondola which has its base in Grindelwald. From the top First, one follows the trail toward Bachalpsee and the famous Berghotel Faulhorn (Most info in German - limited info in English and French) Another link (Dutch) Faulhorn If climbing the trail up the southeast ridge of Reeti, one takes the high trail from Bachsee back south toward Hireleni. If climbing the West Ridge of Simelihorn, one proceeds toward the Faulhorn. TOPO MAP 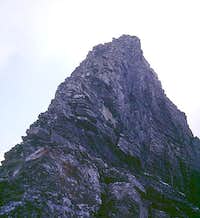 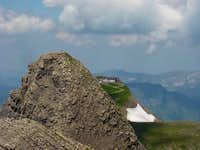 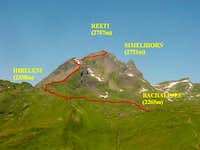 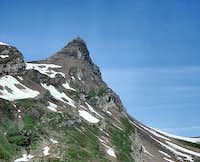 South Side Simelihorn on left

Southeast Ridge EB (erfahrener Bergwanderer; (experienced mountain hiker) - demanding hiking trails which require good balance.) 1 to 2 hours from the saddle with Hireleni. There is a trail that is easily followed in most places. Northwest Ridge L, UIAA I or II, 1/2 to 1 hour from the saddle with Simelihorn. From the saddle between Reeti and Simelihorn, climb the steep talus rock steps of the ridge. Major difficulties are passed on the north (climber's left). There may be moderately steep snow below the rocks above the saddle. 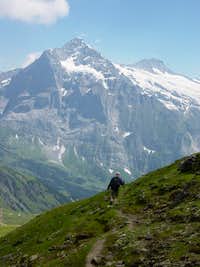 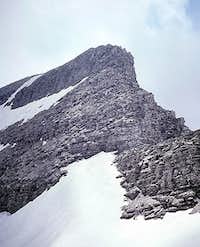 TRAVERSE West to East Climb the West Ridge of Simelihorn, descend the South Side to the saddle between the peaks. Climb the Northwest Ridge of Reeti and descend via the Southeast Ridge. 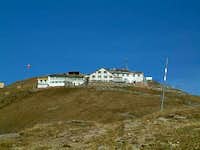 These peaks are easily climbed in one day using the First Lift. Accomodations in Grindelwald