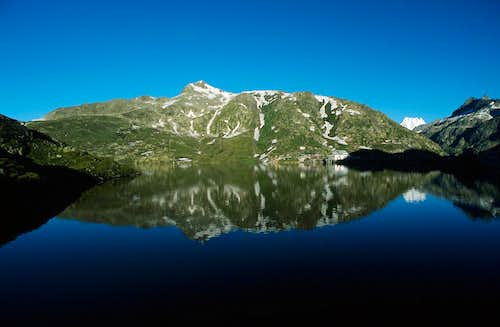 om - Sidelhorn from the north

Some mountains have luck, standing close to high alpine passes which are crossed by frequented roads. That is also the case of Sidelhorn (sometimes also written as Siedelhorn). It is really nothing special by itself - just an elevation in a long ridge, coming on it from the west, from the highest summits of Bern Alps. It is not standing just above the pass, but below, there is really no other distinct elevation, offering that great panorama. And the pass? Yes, east-northeast of Sidelhorn there is Grimselpass, 2164 m, connecting the valley of Rhone river (the land is called Goms) on the southwest, with the valley of Aare river, flowing towards the north-northwest. From the pass Sidelhorn has some of its form, it looks like a pyramid, but still not so much attractive that one would immedially get a strong wish to ascend it. But you must know what is behind! When you get on its top, you can really enjoy one of the finest views in the area. A short, less than two hours long ascent, and great panorama. What else is needed for a summit to become very popular? So, Sidelhorn is only a goal for hikers. On this altitude Bern Alps are still too low for climbing. And in winter the ski tour on Sidelhorn must also be a nice one.

The form of the mountain is simple. A long ridge, coming up from Grimselpass, then on the other side a short ridge, descending on Triebtenseelicke, 2639 m. The slopes on both sides of the ridge are not very steep, close to the summit there are a few rock formations. West of the summit there is on a nice terrace the Tribtenseewli, a small lake on the altitude of 2356 m. The northern and northwestern slopes of the mountain are falling down to Grimselsee, a big lake, filling-in the whole valley on the altitude of 1909 m. The southern and southeastern slopes are falling in many terraces down into the Rhone valley, where a small village of Oberwald is situated. The higher brother of Sidelhorn - Grosses Sidelhorn, 2879 m, is much less known, so let's leave it to someone who has a first hand experience with it.

Even if a separate chapter is fully justified, I will try not to spend too much words on the summit panorama.

Our first attention goes to the high summits on the east of Bern Alps group. Most beautiful is the view on Finsteraarhorn, on Lauteraarhorn and on Schreckhorn, which we all see from the eastern side.

Across Grimselpass the whole Dammastock range is stretching. Especially nice is the view on Galenstock.

Finally the whole southern horizon is packed with the summits of Lepontine Alps and Wallis Alps and in a nice day in the distance the white dome of Mont Blanc is shining.

There are several quite simple routes to the summit of Sidelhorn. If we have some half an hour more, it is most recommendable to combine them in a round tour.

This is the most recommended and frequented route. The ascent is easy most of the time, only on the summit section some steeper scrambling over rock blocks is needed. Difficulty by the Swiss Hiking Scale is T3. Gear: Only good shoes and poles. Time: Good 1 h 30 min.

Description: You start the hike on Grimselpass, 2164 m, but you first take the Oberaarstrasse, a mountain road which goes around our ridge on the slopes above Grimselsee. But after the first curve you already leave the road, deterring to the left. You follow the signs up the steep slope. In turns you quickly gain some altitude and wiews around get more and more nice. After less than one hour we reach Husegghuette, 2441 m, which is closed. Above it the most beautiful part of ascent starts. You walk by a mostly flat ridge which is very panoramic. The views on Bern Alps will be most beautiful in a morning, yes, may be you are lucky to find yourself there at dawn. The last part of ascent goes by the ridge, covered with big stone blocks. This part is again more steep, but not much demanding.

If a bit unpatient, you can also go on top from Grimselpass directly. From the saddle you pass Totesee and then follow a weak trail directly towards the pyramid of Sidelhorn. The slope is not steep and almost everywhere passable. Again, only the last part of the ascent is more steep. Even in summer you may find snow rests there, which is especially fine for descent. The summit point is reached right of the highest point. Again some good 1 h 30 min, difficulty T3.

om - Across the northern slopes

You can also get closer to the summit by the already mentioned Oberaarstraße. From Grimselpass you follow that mountain road all the time above Grimselsee, until you reach the altitude of 2300 m, directly north of Sidelhorn. There you leave the road and turn left up, towads Triebtensewli, the small lake on 2365 m. Above the eastern shore of the lake the path goes up, then soon crosses the slopes towards the south and then in several turns ascends Triebtenseelicke. That is a saddle in the main ridge, southwest of Sidelhorn. On the saddle you turn left and continue by the main ridge on top. You will go by snow fields and rocky terrain. Good 2 hours, difficulty T3.

The route #3 can be best used for return. So we go up by the route #1 and return by #3. In that case we also have the option not to go from Triebtenseelicke entirely down to the lake, but only to the crossroads on 2441 m. If there we deter right, the path brings us around the northern slopes of Sidelhorn in a slight up and down again to Husegghuette, from where we return to Grimselpass.

We can ascend Sidelhorn almost in any season. With proper equipment (if hard snow or icy, we need ice pick and crampons) we can go up also in winter. In good conditions its slopes offer also nice ski tours. The ascent on the northeast ridge (to Husegghuette) is some 30 degrees steep, the summit ridge similarly (rocks). The descent towards the southwest is quite exposed. In normal conditions skiing is possible till June. Much higher and also nice for skiing are the southern slopes.

Photos from a hike

This is a photo-gallery from a hike to the Sidelhorn. (click the photo):