Sinjajevina - Babji Zub (2277 m)
On the Tara - Piva (rivers) vast plateau Durmitor (2523 m) is placed on the northwest, while it's closest neighbour is placed on the southeast. That's the beautiful Sinjajevina mountain, one of most specific mountains of Montenegro. The older name for this mountain is also Sinjavina.

Geographically, this mountain belongs to the High Mountains & Plateaus Region of Montenegro. Some geographers classify Mt Sinjajevina a mountain plateau, but it also holds the largest pasture range in Montenegro. The direction of Sinjajevina follows the rest of the Dinaric ranges, from east to west. Stolovi group
Mt Sinjajevina's relief is rolling due to glacial activity. The complexity of this mountain is due to it's bordering rivers of Tara, Moraca, Tusinja & Bukovica. It stretches from SE to NW, from the towns of Kolasin to Njegovudje (near the Durmitor National Park). The Sinjajevina massif is 40 km long & 15 km wide, and is specific about it's carstic fields and beautiful grassy slopes. The soil composition is arid terrain due to the lack of forest covering and exposure, which has caused it's rather unique foliage.

The highest peaks of Mt Sinjajevina are: These lakes are in the process of natural extinction. Mt Sinjajevina has also numerous ponds nourishing it's existing livestock and wildlife.

The terrain is ideal for mountainbiking, and in the winter months for lengthy skiing. Mt Sinjajevina is easily accessible also from Durmitor National Park, what offer many possibilities for climbing and biking routes in Sinjajevina region. Babji Zub (2277 m)
ACCESS: Gornje Lipovo and the settlement of Klisura (1189 m) is where the trails begins. The marked path goes above the locales of Katunina, steeply ascends through the forest, to 1600 m. It then goes above the forest and beside the rock through called Popov Do, then breaks through the Djedov Do valley Pass (1943 m). From this pass the view opens to Mt Maganik (2139 m). From there turn east, and then a slight descent northward along shortcuts through the rocky slopes of Torna and the former katun of Djedov Do. Continue to the end of this amphitheatre to Dzavrlje, a classic glacial trough. From this point there is a marked path leading west to the upper ridge Mt Torna. The ascent crosses steep grassy steppes, made up of loose stones that easily slide and represent a potential danger. On the highest peak of Torna - Babji Zub (2277 m), there is an official register book. The view from the summit includes the Plasnica Valley, the hamlet of Lipovo and towards the south, the Moracke Planine (Moraca Mountains, 2226 m).

As an alternative, the return from Babji Zub can be made by steep descent on a former livestock trail through the village of Redice, then to the settlement of Polje Dragovica (T3, 4h). Farther on, there is an asphalt road 14 km long to the settlement of Mioska on the Kolasin-Podgorica road.

ACCESS: By car from Kolasin, through the village of Gornje Lipovo, to the village of Kaljica Selo, on a narrow asphalt road (13 km), following the Plasnica River ravine is where this route begins. From the settlement of Klisura, take the often winding gravel road to the Vratlo Pass, which is the entrance to the Sinjajevina plateau. The Jecmen Do katun (shepherd's cottage) is westward, but go eastward passing by the Pilac katun, a few shepherd's cottages. Continue east-northeasterly towards the steep and grassy slopes of Jablanov Vrh. This part of the ascent is strenuous and demanding but it is well worth the effort for it's splendid views of the Moracke Planine (Moraca Mountains) mountain range, with it's highest peak being Kapa Moracka (Lastva, 2226 m). There is a partial fence on the summit, once intended for a grave. From the summit southeastward, descent can be made to the Savina Voda (1782 m) spring, with a small reservoir of and artificial lake, offering nice refreshment and bathing during the summer months (1h-T2). From the Savina Voda spring descend through Savino Zdrijelo (1880 m), along a shepherd's trail to the Puletic katun and on the village of Gornje Lipovo (Knez Do)(2h-T2). Beauty of SINJAJEVINA
By plane:
The closest airport is the one in Podgorica (70km away).
If you are planning to come via Serbia, you can use the Belgrade (Beograd) Airport in Beograd (Belgrade) city, capital of Serbia and Montenegro.
Information about flights and tickets on JAT Airways web page.

By train:
Beograd - Bar (Bar - Beograd) railway passes through Mojkovac and Kolasin. In winter, there is a special ski-train for Kolasin from Bar and Podgorica. When you get off it, a ski bus will take you straight to the ski resort. 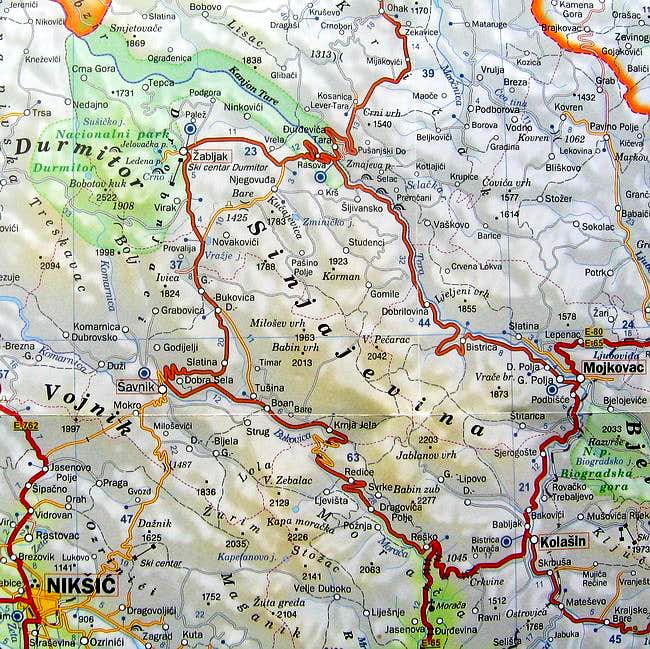 The map of Sinjajevina and it's surroundings

From Podgorica you can also take the village road for Kolasin. It goes across Lijeva Rijeka, Verusa and Matesevo. One part of it goes along the Tara River, which in this area is like a small, gentle and playful spring. The road is narrow, but in good condition. From the north, you will reach Kolašin if you take the highway that passes through Mojkovac. If you are coming from the east you should go across Andrijevica through Matesevo to arrive to Kolasin. You will be surprised by the difference in the landscape of the northern and the southern access to Kolasin. Unlike the south, the vegetation in the north is more lush, green and soft.

Sinjajevina (2277 m) offer nice hiking and climbing adventures. The Sinjajevina peaks you can climb whole year. If the snow is hard and frozen, bring with you the crampons and ice axe.

The best period for the Sinjajevina peaks climbing is mid June - mid October.

In the Mt Sinjajevina (2277 m) area don't exist mountain huts, so you can freely use your private bivouacs and sleeping bags and put them belowe the peaks of the Sinjajevina. Also, you can use empty shepherd's lodges for stay inside.

No fees or extra fees for entering the Mt Sinjajevina.
No permits needed either.
Usual rules of behaviour for NP's do apply.