Panorama of KOMOVI ~ Click to enlarge ~
Together with DURMITOR range and PROKLETIJE range, KOMOVI range belong to the group of the three most impressive and most magnificent mountain ranges of Montenegro and also of DINARIC ALPS. Komovi range is situated in the eastern part of Montenegro (Serbia&Montenegro) and it stretches between the farthest upstream parts of the Lim river to the east and the Tara river on the west, to Drcka river to the north and Prokletije with mount Planica to the south.
From the south and east it is encircled with a complex of Montenegrin - Albanian mountain range known as Prokletije (the highest peaks at altitude of 2534 m - Kolac/Maja Kolata, 2694 m - Jezerski Vrh/Maja Jezerce), and on the north by Bjelasica mountain (the highest peak at altitude of 2139 m - Crna Glava/Black Head). 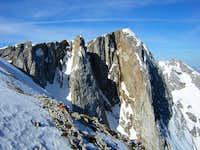 Vasojevicki Kom
This mountain massif of Komovi, 40 km long and 30 km wide, is encrusted from all sides by spatial plateaus at average altitude of 1900 m (Stavna and Ljuban to the north, Rogam to the west, Crne to the south and Varda to the east).

A tame village Konjuhe is located on the east side in the vicinity on the foot of Komovi mount, in the valley of the Peruchica river. Mountain massif Komovi sharply rises from that place at the altitude of 850 m as a gigantic mountain pyramid.

From the highway in the vicinity the mountain passage at Tresnjevik a magnificent and unforgettable panorama of northern side opens up with northern side of three rocky peaks of mountain Komovi with its abundant forest cover at the foot of it. 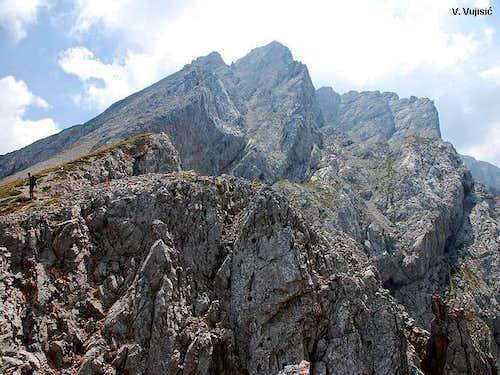 In the Kingdom of KOMOVI 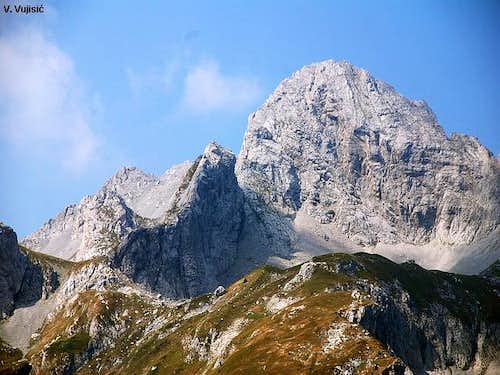 Eastern and southeastern side of this mountain belongs to Polimlje and to municipality Andrijevica. It is the eastern side of Vasojevicki Kom which, from its top (2460 m), slopes down to Stavna and Varda (1900 m) and to the Lim river at 700 m. Confluent valleys along the Lim and Tara rivers are sharply cutting lower parts of Komovi mountain in radial manner and make this area accessible from all sides. This area is known for its direct openness and vicinity of the shortest tourist-frequented route between southeast Montenegro and its coastal region and a favourable continuity and exposition of its slopes.

The length of potential slopes at Stavna and Carine is 3762 m and average sloping angle of topographic area ranges from 11 degrees (at Shtavna) to 19 degrees (at Carine). These mountains represent shaped plateaus and slopes which lie at altitudes ranging from 1500 to 2000 m. Stavna and Carine stand out with their big potential for developing tourism.

Komovi mountain fascinates everyone with its diversity of natural attractions. One can see all the potency of nature through endless geological periods. Komovi peaks are encircled with cuttings formed around springs in pre-glacial water sources. Basic morphological charachteristics of cuttings are their vertical and conical shape, always being bare, with open asymmetric sides, rugged edges, and they are situated below the blocks etc. 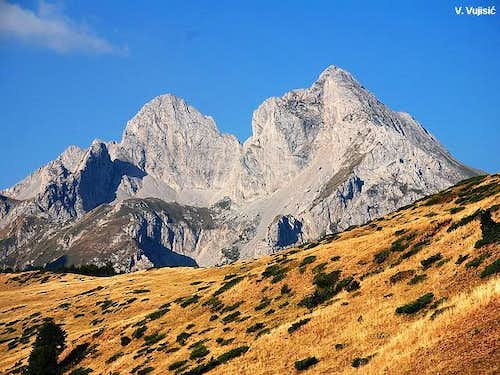 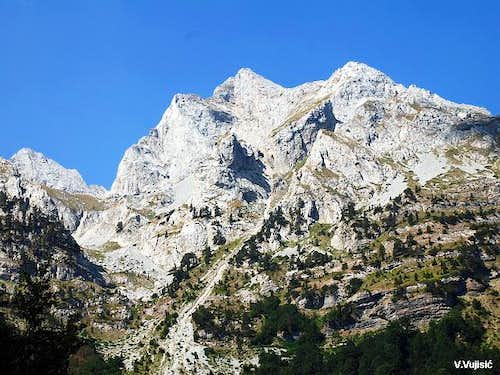 Impressive massif of Kom Ljevorijecki (2469 m)
To the west, below the cliffs of Kucki Kom, there are Rogam cutting and Pricelje cutting with little lakes and ponds. In the south side below the very top of Kucki Kom there is a cutting called the Popovich's Cabin. Out of all cuttings in Komovi mountains the most conspicuous is Medjukomlje in most authentic in the northern side of Komovi.

In the eastern slopes of Vasojevic's Kom, pre-glacial relief did not caused formation of cuttings. Traces of double glaciation can be seen in glacial depressions and morenic alluvions at Stavni and Vardi. There, at the shepherd settlement at Varda, rice big morenic walls (very bog rocky material that glacial rivers and snow avalanches had torn from the ground and sides of tidal water-channel and, at the end of kinetic power, heaped there without any order).

Almost everywhere around Komovi ridges from their very tops there are big heaps of sandy and rocky materials "tochila" and "sipari" that were made out of the processes of erosion ("tochila" are shallow and narrow unformed oval troughs, while "sipari" are heaped sand and stone materials that fell off and heaped at the foot of tochilo and they fill out the bottom of cuttings). They look like rivers of rock as they go down to the cuttings and river valleys of Perucica and Kucka rivers. The biggest "sipari" is located on north-eastern side of Vasojevicki Kom and it si almost 3 km long. These unusual valleys and "rocky chaos" complete an outstanding composition on this space. 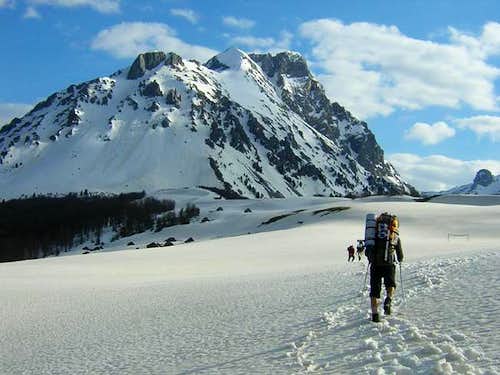 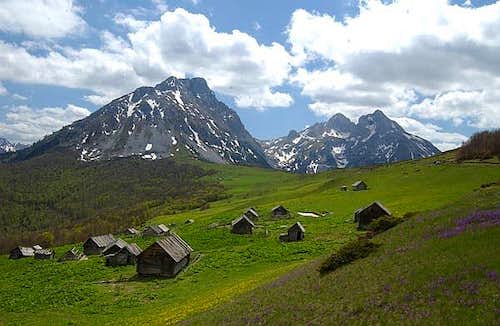 -To airport in Belgrade (Serbia),...than from Belgrade you can use flight to Podgorica airport or go from Belgrad to Komovi by bus, train or car. 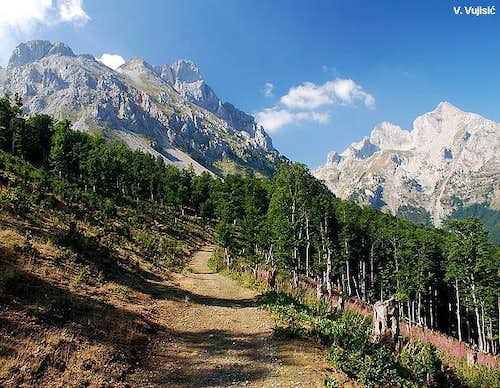 Entrance to Paradise of KOMOVI 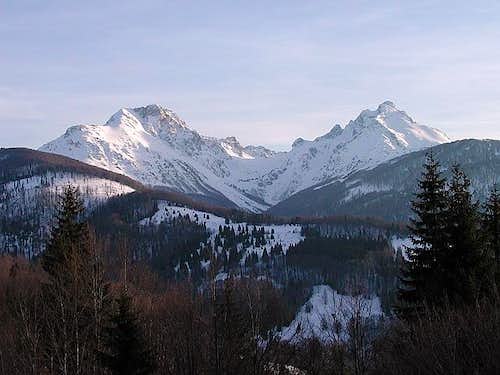 In Komovi area you don't need to pay a special fee. Area is peaceful and safe. 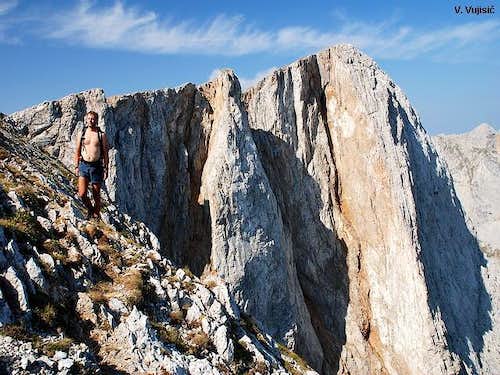 Descending from the summit of Vasojevicki Kom (2461 m) 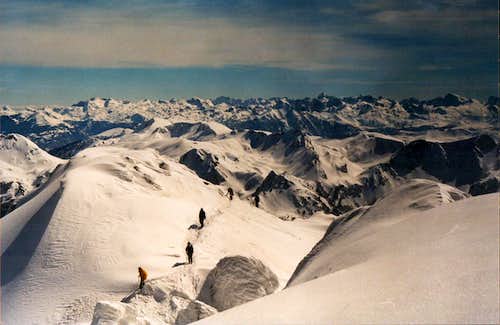 Magnificent Komovi
Like on every mountain, you can climb during whole year, in all year seasons...The optimal period is mid June - mid September. July and August - the best. 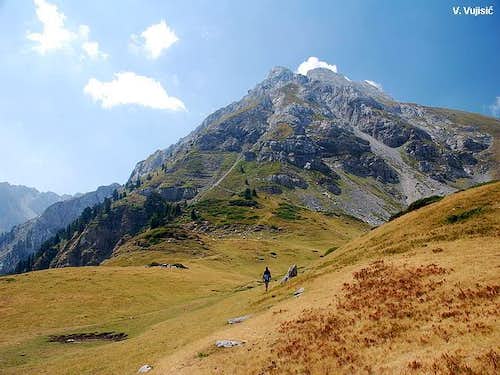 On the Ljuban vasty plateau 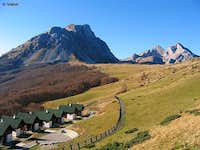 Eko Katun on Stavna
Belowe the peaks of KOMOVI massif, on Stavna vasty plateau, you can find "Eko katun Štavna" (Ecological complex of houses for renting). There you have 10 houses for renting. Daily price for renting of one house is 40 Euro/8 Euro per person (each house has 5 beds, livingroom, bathroom and shower with warm water). Also, inside of Eko katun you can use the services of restaurant.

Around the massif of Komovi you can find many beautifully places for private camping in your tent.

Best time for visiting Komovi is mid June - mid September. But, as on many mountains, you can climb also during whole year.

Warning for those who plan to approach Trešnjevik pass by car: one section of the asphalt road after Mateševo village is closed (probably due to being completely washed away by the parallel river). Here you have to ascend a rough rocky serpentine (to the right) and descend on a steep ramp on the other side to get back on the asphalt road. It is not mission impossible, but be careful with low cars!

The road to the Tresnjevik pass from Kolasin is in poor condition but nowhere impassable. From the east the road from Andrijevica is in much better condition. The road from the pass to Eko katun Štavna is now tarmac. The Bjelasica Komovi 1:60,000 map is available from Stanfords in London. Dave