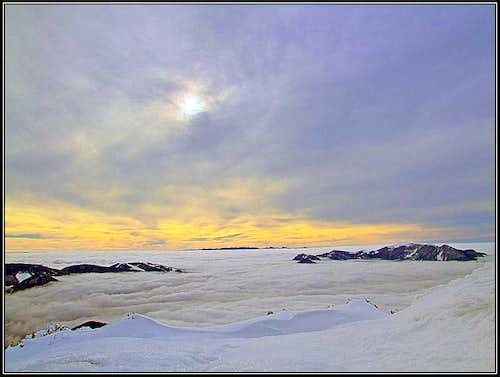 A late autumn view from Ratitovec

Ratitovec is considered to be the south-easternmost summit of Julian Alps. As it has also a similar character as the neighbouring Julian Alps fore-hills, it is also considered to be a part of the hills of Škofja Loka and Polhov Gradec. But due to the fact that it is the highest elevation of Jelovica plateau, which is a part of core Julian Alps and that its massif is a direct continuation of the South Bohinj mountain chain, putting Ratitovec in core Julian Alps is justified. Even if the massif is rounded, it shows also several steep rock faces and already an overall high alpine character, as it is manifested in Julian Alps.

Ratitovec is a broad massif, finishing on the southern side the Jelovica plateau. While the plateau lies on altitudes from 1000 m to 1300 m, all four main summits of Ratitovec exceed the altitude of 1600 m. The main ridge of the massif is running in the W-E direction, on the highest point it starts turning towards the NE. The four summits, starting from the west, are: Kremant, 1658 m, Altemaver, 1678 m, Gladki vrh, 1667 m and Kosmati vrh, 1643 m.

The area is very popular in all times of season. Due to broad panoramas on all sides and abundant flora, these are perfect hiking goals. The net of marked paths is dense and people are coming from various directions. Just below the top there is a mountain hut, which is usually opened also in winter (for weekends). In winter, Ratitovec is also a perfect ski tour, appropriate for a quick half day ski trip. Especially, as the villages on the SE, where ski tours usually start, are reachable by roads, so you gain some altitude.

The Character of the Area 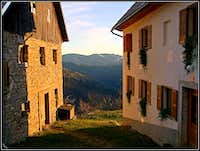 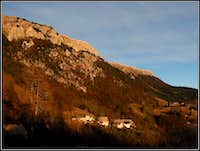 The area is very nice for a visit. The main objective of Ratitovec hikes is of course the panorama. Especially the view on Triglav massif is exceptional. But during the hikes, you can enjoy also several nice scenes - the southern rocks, views from top down on cute villages, the greenery all around and in winter all kinds of winter scenes.

The broader area is also interesting in a cultural sense. The valley of Selška Sora, south of Ratitovec, was in the year 973 granted to the bischofs of Bavarian Freising. They started to populate at that time mostly empty parts first above the valley of Bača and a few decades later also the terraces below Ratitovec with German people from Tirol (from the neighbourhood of Innichen). Even today many toponimes still remind on the German origin. The highest summit of Ratitovec, is for example Altemaver, which probably originally meant in German "the old wall". Still today some remains of the old dialect could be traced in the high villages, but even old people are kind of hiding it.

The high villages below Ratitovec are really like pearls, they are among the highest ones in Slovenia. One more picturesque than the other, lying on a sunny terrace. Sorica, Zgornje (Upper) and Spodnje (Lower) Danje, Zabrdo, Torka and Prtovč can be a goal of a hike themselves. They are all connected with a road, which is intermitted only in the part between Torka and Prtovč. But upwards that part can be done by a bike (pushing it up), and the rest can all be a beautiful mountain bike tour. In the past the area was also known for their blacksmith and ironery. With the industrialisation the craft in Železniki ceased at the end of 19th century.

The highlight is certainly the view on Triglav massif. Perhaps this view is the most beautiful from Kosmati vrh, on the very NE part of the massif. Otherwise you have a free view also on the Karawanks and the Kamnik & Savinja Alps. On the other side the whole hilly Slovenia is in front of you and in the direction of Dinaric Alps, in a clear day also very distant summits in Croatia can be seen.

A self-made map of Ratitovec massif

Most likely you will reach the massif from the southern side. From Škofja Loka you drive by a good road into Selška dolina (valley). In Železniki town you can deter on a mountain road which brings you in Prtovč village (or in a lower lying village of Podlonk). There is the most popular trailhead. Other southern trailheads are in the villages west of Prtovč (Zgornje Danje and Torka). You can reach them from the valley or by the road from Sorica - see the map on the right.

The second possible hike goes from the east, from Dražgoše village. But that is quite a long one.

Coming from Bohinj valley, you can start a hike on Soriška planina - the mountain pass and alpine meadow - where you can start the hike along the west ridge.

Other trailheads can be on several mountain roads of Jelovica plateau, so from the northern side. This requires a good map, because you can easilly get lost on many roads there. These are the roads, which go south from Rastoka saddle, 1122 m, or from Rovtarica hut, cca 1050 m or from Bitenjska planina. Perhaps not so popular in summer, these can be in good conditions nice starting points of a cross country ski tour. The northern slopes are not rising as steep as the southern ones.

South of Rastoka saddle, there's the trail head near the interesting Ledina peat bog. From the crossroads where the road is closed by a ramp, we have only some 1 h 30 min to the summit of Kosmati vrh. Otherwise, Ledina is a protected natural area, part of the paneuropean Natura 2000 project. 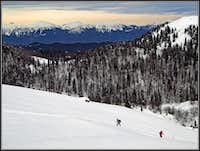 1. From Prtovč, 1011 m, east approach. In the village you continue northwards. A good path brings you in the valley of Razor, through which you ascend in the NW direction. In the upper part you turn left and over the last steep section ascend to the hut and further on Gladki vrh or Altemaver. Easy, a bit steeper in the last section, also the most recommended ski tour. The ski tour is even more beautiful from Podlonk village, 780 m, because you make advantage of some nice grassy slopes above the village. In summer the tour from Prtovč will take you some 2 hours.

2. From Prtovč, 1011 m, south approach. In the village you go left, by the marked path, which crosses the slopes towards the west. In the last part, below a distinct saddle between point 1348 m and Ratitovec (called Poden, 1264 m), the path does a few turns. On the saddle the path turns right and goes directly on top. In the section where it overcomes the rocky part, the path is picturesque, but also steep and a bit exposed. If icy and if having with you small kids, the path requires some care. Otherwise it is very recommendable, together with the route #1 you can do a nice half-day round tour. 1 h 45 min for ascent. Skiing by exactly this route is not recommended. But you can use a very steep slope below the material cable way to get down (also to Torka - see the route #3!).

3. From Ravne or Torka, 1175 m. By a narrow mountain road you continue towards the east on Poden saddle below Grebel vrh, 1348 m. A bit before the saddle (till there possible by car) you can already deter left (inscriptions), hit the route #2 and ascend on top as described. 1 h 45 min.

4. From Zali log, 526 m. This village is deeply down in the valley of Selška Sora. A marked path brings you up on the saddle of Poden, from there you continue as described in #2 and #3. Some 15 min west of this trail is the ex shale quarry, called Strojevčev skrilolom.

5. From Zgornje Danje, 1100 m. The marked path goes up in the NE direction (because of many cart roads you must carefully follow the marked path). First through the woods, then it reaches nice alpine meadows (first Spodnji Jirn, then the meadows below the main ridge). In the E and NE direction you slowly gain altitude. The path mainly keeps right of the main ridge, later it brings you on the ridge, just before the steeper and rocky summit of Altemaver. On a broad saddle between Altemaver and Kremant you hit the marked path, coming from Soriška planina. By it you go right, ascend Altemaver and perhaps continue towards the mountain hut. You can descend by the route #2 and make again a nice round tour. 2 h 30 min for ascent. Remark: It looks that over the rocky southern walls no convenient trail goes from the inhabited terrace on the main ridge! 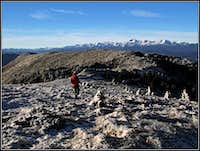 6. From Soriška planina, 1200m. The saddle between Selška dolina (south) and Bohinj valley (north) is called Bohinjsko sedlo. Two marked paths start from there, they join on the saddle (1266 m) after the first elevation. Then we continue in the E direction, first through the woods, then over nice grassy slopes. Due to many paths, take care to stay on the marked path all the time. The part over the summit of Kremant is very panoramic. Altogether the whole hike is easy, taking some 3 hours to bring you on top.

7. Over Pečana meadow. From Bohinj side, we drive by forrest roads on Bitenjska planina and there deter further up on Ribčeva planina, 1140 m. There we park and continue hiking in the SE direction. In half an hour we reach the Pečana meadow, 1467 m, continue a bit more towards the SE, but soon the path branches. We go right on the saddle between Altemaver and Gladki vrh and from there on top. 1 h 30 min from the road.

8. Kosmati vrh. As described in #1, we go from Prtovč, 1011 m, into Razor valley, but there we continue upwards and over a steep and even a bit exposed slope (take care in winter!) towards the N and then easilly towards the NE on the panoramic summit. We can also continue by the Razor valley till its end, where on Vratca (saddle), 1511 m, many paths come together. For Kosmati vrh we go right, for Gladki vrh and the hut the marked path goes left. Vratca can also be reached from Pečana meadow (see the description in #6). Kosmati vrh can also be reached by a marked path from the N. It starts on Rastoka saddle, 1122 m, but we can use also some mountain roads towards the south from there.

9. From Dražgoše, 793 m. This marked path is only the ascent path to Prtovč, even if you could also go on top also over Kosmati vrh.

Krekova koča, 1642 m. Unless you come from far away, you will probably not sleep there. But the hut just below the highest summits of Ratitovec is a pleasant stop, especially in winter times. 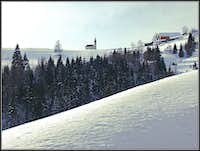 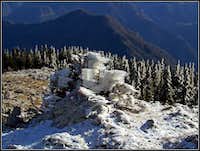 Any time of a season. In a hard winter a few parts of paths can become dangerous, as it was warned in route descriptions. Ratitovec is also a beautiful ski tour destination.

Golden autumn on the southern terrace