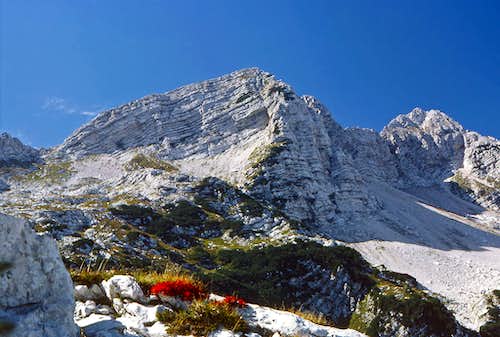 From wherever you are looking at the long South Bohinj Range, one mountain will certainly catch your eyes. That is Podrta gora (Collapsed Mountain), standing in the middle of the highest area of the range. Its sharp shape makes you think it is the highest one. But it's not. The neighbouring Tolminski Kuk, 2085 m, is higher. But Podrta gora is the hardest to ascend. Nothing so special, of course. But without some easy climbing and scrambling it doesn't go. That is why it is very rarely visited (people are comfortable).

The rocks of South Bohinj Range mountains are on many places crumbly. So, also Podrta gora is not posing any challenge to serious climbers. The walls are not high and the rock is poor. Besides experienced hikers in times of tour skiing very rare skiers also climb on top. Towards the north, on Komna plateau, two hard ski descents go. Not from the very top, but some of those who dare there, may also leave skis on the ridge and go those additional 50 meters on top.

The highest rock of Podrta gora, 2061 m, has ridge guards on the west and east. The western fore-summit is called Mali vrh, 2015 m, and the eastern ridge summit is called Vrh Konte, 2014 m. On the west the narrow area of the mountain ends on the saddle below Zeleni vrh, on the east, border is on the important Škrbina (Notch), 1910 m.

The name has an obscure story behind it. People were telling that once Podrta gora was higher than Triglav, the king of Julian Alps. (According to dimensions of those mountains that's not possible.) But then a strong earthquake happened and the mountain collapsed to its today size. You can still see a lot of debris around...

You can reach the mountain from many directions. See also the page of South Bohinj Range! 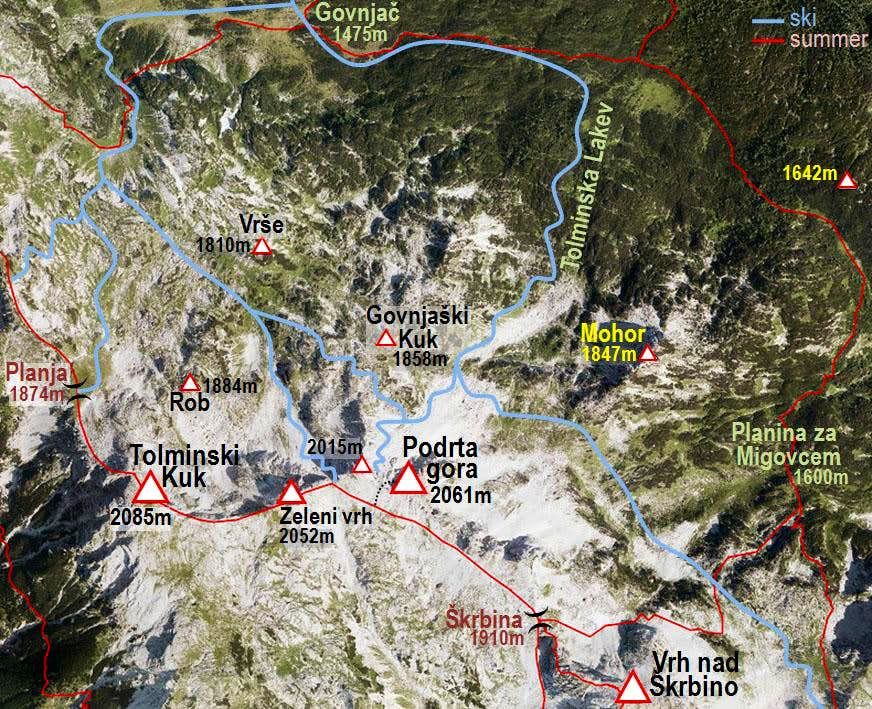 As you see from the list of trailheads, the ascents from all sides are quite long. I will not repeat descriptions of lower parts of ascents. They can be found on other pages of the nearby mountains, such as:

As described on other pages, the marked path is crossing the southern upper slopes of Podrta gora from Škrbina pass, 1910 m, to the notch between Zeleni vrh and Mali vrh. Škrbina notch can be reached by good, marked paths either from the northern side (Bohinj) or southern side (Tolmin).

So, from Škrbina we follow the marked path towards the W-NW. It is slightly ascending over the scree slopes. In some 15 minutes we are already below the southern rocks of Podrta gora. The easieast ascent on top goes by the southern face. We soon start to scramble, higher the rocks are getting steeper and passages require also some easy climbing, which should not exceed UIAA degree I. Just below the summit there are also some exposed sections, but the difficulty of climb remains the same till the top.

Also Mali vrh can be ascended in a similar scramble. The ascent is also going by its southern slopes and is even shorter. The connection ridge from Mali vrh to Podrta gora is a bit harder. If strictly sticking to the ridge, you will encounter a few details of climbing UIAA II, but if you detour those sections on the southern side, difficulties should remain around upper UIAA I. 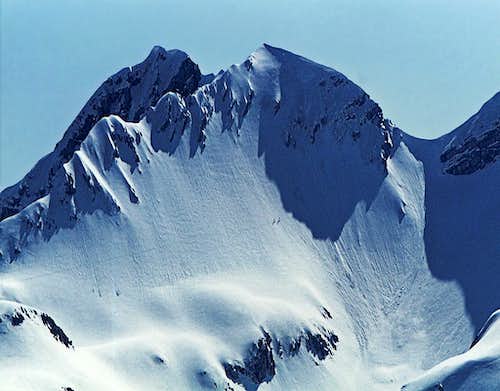 Both ski tour goals are usually reached from Dom na Komni. See the page of Komna for more details how to reach the hut (2 h 30 min from Savica parking place)! From Dom na Komni you can reach Govnjač basin in some 30 minutes (route marked by big poles), skiing towards the south-west.

The summit ridge of Podrta gora (between the main summit and Mali vrh) can be in good conditions reached from the north. We reach that slope from Govnjač by two variants:

1. Western approach. From Govnjač basin you go towards the west and only then turn left, towards the south. Through a steep passage (ravine) you reach the plateau east of Kser, 1900 m, and north of Vrh Planje, 1971 m. There deter from the route on Planja saddle - go left, in the south-eastern direction. Ascend over the plateau and between the hills of Vrše on the left and Rob on the right. On the other side continue in the E-SE direction on the saddle between Govnjaški Kuk on the left and Mali vrh on the right. After crossing the saddle, you are below the northern slope of Podrta gora.

2. Eastern approach. From Govnjač continue by the route on Konjsko sedlo - following the tour ski poles. You first ascend in the eastern direction, then turn right towards the south and ascend through the valley, called Tolminska Lakev. In the upper part the ascent goes towards the SW and brings you below the northern slopes of Podrta gora.

Finally, you ascend steeply by the northern slopes of Podrta gora - on the notch between the main summit on the left and Mali vrh on the right. There leave skis and eventually ascend the main summit. For that you need a complete winter equipment (ice axe, crampons, may be rope).

Skiing is done by any of the two ascent routes, described before.

The goal of the second ski tour is the saddle between Mali vrh and Zeleni vrh. The final ascent also starts on Govnjač. The western route is recommended. So, you go up to below Planja saddle, cross the ridge between Vrše and Rob, and find yourself in the valley, which ends above on the notch we aim. Continue in the SE direction, the upper part of ascent is very steep! Leave skis there. From this notch the summit of Podrta gora is a bit more remote, so consider if you really wish to ascend there (complete winter equipment needed!). You ski down by the ascent route.

You can best ascend Podrta gora in dry seasons. In these mountains that is between June and November. The two ski tours are hard and require good and avalanche-safe conditions. Komna is popular for tour skiing, but from April on, you will rarely find snow to ski down till the parking place in Bohinj. If coming earlier, you should take care that on the northern slopes of those notches there is no danger of avalanches and the snow is not icy. Usually February and March would be good times for harder ski tours in this area.

On Komna, there are two huts supporting ascent on Podrta gora:

The third mountain hut is on the southern side: