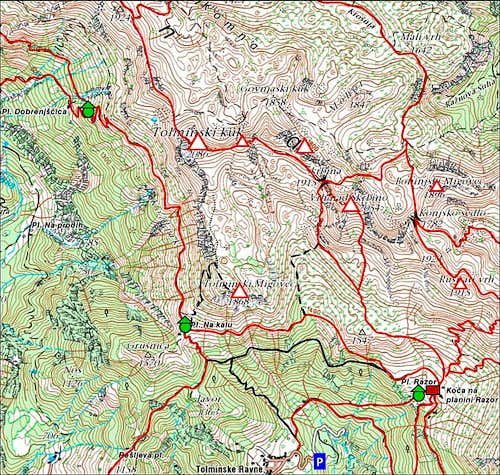 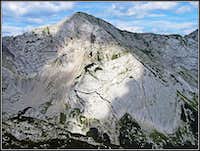 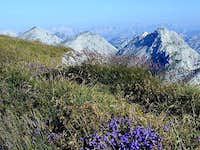 The summit
Mountains of South Bohinj Range make impression as a whole, as a long range in which altitudes of summits and ridges vary only a little. In the middle part of the range the summits are also rocky which adds some more to the general impression. While many of the highest summits are still gentle enough to be suitable also for skiing, Vrh nad Škrbino is mostly a summer goal. Its south slope can be ascended by a steep hike/scramble, all other sides are even a bit harder to be climbed. But the W-NW ridge is tamed by a short ferrata, I guess the only one on the South Bohinj Range, so the summit is still quite often visited. The narrow area of Vrh nad škrbino starts on the E-SE on the Globoko saddle, 1828 m. This is a traditional pass across the range which is also today crossed by marked paths. From there the ridge towards the W-NW is pathless and rarely crossed. The summits are the following: Vrh Planje, 1863 m, Rušnati vrh, 1915 m, the distinct Meja, 1996 m, and finally Vrh nad Škrbino, 2054 m. After the highest point, the ridge sharply lowers down on Škrbina notch, 1910 m, which is again being crossed by a marked path in the south-north direction. One interesting feature of Vrh nad škrbino is its SW face. A huge limestone slab structure rises steeply there, offering also enjoyable climbs. This feature is being seen from far away, by it the summit of Vrh nad škrbino is clearly recognized among its neighbours. 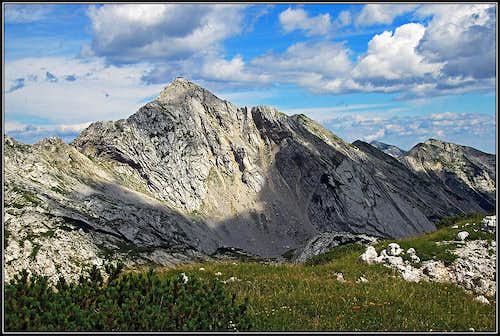 Vrh nad Škrbino from the west On Tolminske Ravne
To ascend Vrh nad škrbino from the south, hikers almost exclusively use Tolminske Ravne, 940 m, as a starting pont. One hour higher, on the altitude of 1315 m, there is the well known mountain hut, called Koča na Razor planini. Northern ascends start in Bohinj valley. One can start the tour in Ukanc, 560 m, or use the Vogel cable car system which takes you below the main ridge, but then you have some distance to overcome. Also Dom na Komni (hotel), 1520 m, which can be reached in 2h 30 min from Bohinj valley, can be a good starting point of a tour. The third option is a long-distance trek, crossing the whole South Bohinj Range, which would mean starting the tour much further on the east or west, but on a two-day trek one would again probably sleep in Koča na Razor planini. See the parent pages of South Bohinj Range and Bohinj Group to see how to reach trailheads!

No limitations. The area is within Triglav National Parc. See the page of Julian Alps to learn more about it. 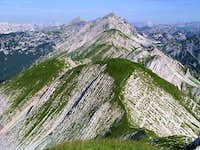 The saddle can be from the south reached from Koča na Razor planini, 1315 m, in 1 h 15 min (2 h 30 min from Tolminske Ravne). How to get to the hut, see here. From the north, the saddle can be reached through Žagarjev graben (3 h 30 min) or from Vogel cable car upper station (2 h 30 min). Once on Globoko saddle, you mainly follow the main ridge. But it is not easy. The summit of Vrh Planje is best detoured by the southern side, so we avoid the sharp western descent from this summit. The continuation to Meja is then panoramic and easy (the saddle before Meja can also be reached from the north). The last part of the ridge is again more sharp and requires quite some care and even some very easy climbing. Altogether this is a very nice, panoramic ascent! 2 hours from Globoko saddle. 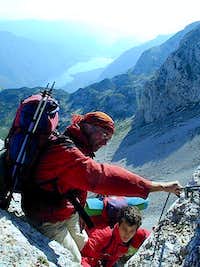 The W-NW ridge
Also this saddle/notch can be reached from the south or north. From Koča na Razor planini the ascent takes you 1 h 45 min (see the description here!). The ascent on Škrbina from the north is longer. From Komna the path is all the time marked. You go first on Planina Govnjač, then on Planina za Migovcem and finally on Škrbina - 2 h 30 min till here. The second option is an unmarked path from Ukanc through Ražnova Suha. It is much abandoned and requires very good orientation skills - 4 h. From Škrbina notch the ascent on top is straightforward. The marked path enters the ridge, but soon avoids the steep pillar going left of it. The ferrata ascends through a very steep, slab-like ravine (cables) until it gains the ridge again. Protection devices help us further up, soon the ridge gets less sharp and we reach the highest point. 30 minutes from the notch.

Coming from Koča na Razor planini, we can shorten the ascent if we go over the southern slope directly on top. On a small plateau, called Rupe (good 30 min from the hut) we reach the branching of marked paths. The direct ascent goes right, reaches the southern face and starts ascending directly over it. The path is not easy. The terrain is steep, a safe step is required, a part could be called also an easy scramble. But the route is well marked and you will find best passages. Above, the path goes over left on a grassy side ridge, which represents the edge of the famous slab wall. By the ridge steeply on top. 2 hours from Razor planina. 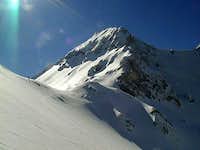 Meja in winter
Vrh nad Škrbino can best be reached in summer and autumn (June to October). I once did the ascent in spring and the tour from Globoko was in snow quite demanding. For skiing the summit is not the most appropriate, but in really good conditions the south slope are negotiable.