North of the ice covered giants of the Zillertal Alps, between the Zillertal Valley itself and the broad Inntal Valley you find a small mountain range, the Tux Alps. Named for the villages, valleys and glaciers of Tux and Hintertux, this range is often overlooked. Though it is located in the heart of the Alps, almost at its geographical centre, the range is sometimes even called Tux Pre-Alps. Indeed the range does not look overly impressive with its smooth slopes and pastures, but nevertheless it reaches heights of almost 2900m.

Compared with its neighbours to the north, the Northern Limestone Alps ranges of Karwendel and Wetterstein the summits are tame, compared to its southern and western neighbours the Zillertal and Stubai Alps it is low and still it deserves to be visited. In summer the inner regions of the range are very solitary, thanks to their remoteness while the areas around the ski- and chairlifts of Innsbruck, Tux or Mayrhofen can be very crowded, especially on weekends.

The same lifts serve the ski runs of the area in winter and it is then that most visitors come to the region. They probably won’t remember the Tux Alps as such but rather the sloped they skidded down, but that’s a fate most heavily developed ski resorts share. In the northern centre of the group the Austrian military operates a training area which is closed down for the public whenever there is a manoeuvre. In consequence this area can be very lonesome when open, even though it has been developed with several high reaching mountain roads.

The highest mountain of the Tux Alps is Lizumer Reckner at 2886m, which can be found in the centre of the range (but still within the military training area). It is a rocky summit which can be reached by the only Klettersteig (Ferrata) of the Tux Alps, a short but steep route, rated UIAA I without the cabling.

The above panorama gives a good impression what the Tux Alps look like and why sometimes they are called Tux Pre-Alps. Most of the range consists of smooth slopes, covered by meadows and pastures with only the highest summits being comparatively rocky. Among its neighbours the Tux Alps often vanish and you need a good vantage point like Allerleigrubenspitze in the eastern Stubai Alps to catch the skyline of the range at all.

I didn’t find any official grouping structure for the Tux Alps so I “invented” my own. For most of the subgroups the grouping is quite obvious, since the Tux Alps are divided in several north-to-south running ridges, separated by profound valleys. Only in the south and east the structure of the ridges is more complicated so that I introduced an additional southern subgroup while dividing the easternmost ridge into two parts. I’m open for discussion for that structure.

Right now on SP the Tux Alps are divided into six subgroups, five of which run north to south while the southernmost one runs east to west. The subgroups have been named by their highest or most profound summits.

The north-westernmost subgroup of the Tux Alps is located south-east of Innsbruck. With Patscherkofel and Glungezer it contains two popular ski summits which are connected by numerous hiking trails. The group is bounded by Inntal in the north, Wipptal in the west, Navistal in the south and Volderstal with the Navisjöchl Saddle in the east. Its highest summits are Kreuzspitze, Rosenjoch and Grünbergspitze, all located within a few hundred metres of each other and all reaching between 2700 and 2800m. The summits of this subgroup command great views over Innsbruck towards the Wetterstein and Karwendel Ranges.

Like most of the other subgroups of the Tux Alps the Reckner Group is a north to south running ridge, bounded by two profound valleys. To the east you find Voldertal Valley, while to the west the boundary is Wattental Valley. The southern boundary are the high passes of Griffjoch and Junsjoch to the east and west of Lizumer Reckner. The Reckner Group contains the highest mountains of the Tux Alps, all grouped around Reckner and reaching more than 2800m. This part of the group belongs to the military training ground Wattener Lizum and is prone to periodic closures (see red tape). Thanks to the military there are several high reaching roads, effectively connecting many of the summits of this main ridge.

The south-eastern ridge of the Tux Alps

The only ridges, which don’t run north to south can be found in the south of the Tux Alps. Bounded by the Schmirn and Tux Valleys in the south and the Navis Valley in the north two ridges run into the centre of the group from both east and west, culminating near Lizumer Reckner. Both ridges are excellent hiking grounds with a vast net of hiking trails. Most summits can be climbed easily, with the exception of the mountains in the very south, Öfner Hornspitze and Gamskarspitze. The former is a grassy pyramid with a very exposed south ridge, a very interesting destination from the Tuxer Joch Saddle in the south. In this saddle the Tux Alps meet the Tux Main Ridge, the eastern- and southernmost subgroup of the Zillertal Alps.

Hirzer or Hirzerspitze might not bet he highest mountain of this group but thanks to ist isolated location in the north it is more singular than the higher mountains in the south which group around Lizumer Reckner, the highest mountain of the Tux Alps. This subgroup consists of a single ridge, running from north to south with only small side ridges to all sides. The ridge is bounded by the Wattens Valley to the west and the Weer Valley to the east reaching up to Junsjoch Saddle and Geiseljoch Saddle respectively. To the north the group is bounded by the Inn Valley while in the south the Tux Valley is its limitation. 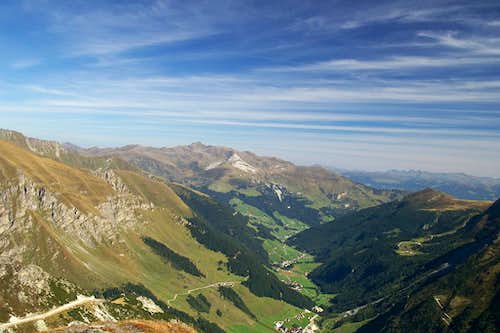 The Rastkogel Group above the Tux Valley

Like most of the other subgroups the Rastkogel / Gilfert Group runs through the whole Tux Alps from North to south. With 2762m Rastkogel, which is located in the south of the subgroup, is its highest summit. To the north, a little separated from Rastkogel and its satellites is second subgroup, grouped around Gilfert (also Gilfertberg). Rastkogel is best known for the ski runs on its south slopes above the villages of Mayrhofen and Finkenberg. The boundaries of the group are Zillertal in the south and east, Inntal in the north and the Weer Valley with Geiseljoch Saddle in the west.

This easternmost subgroup of the Tux Alps can be divided in two parts. In the north, above the villages of Schwaz and Straß there is a small group, consisting of a single mountain, Kellerjoch, and its satellites. To its south, across the Fügen / Hochfügen Valley there is a slightly larger group with Marchkopf as its highest summit. Like most of the mountains of the Tux Alps these summits are smooth and often covered with pastures. On the east side of this subgroup several roads lead high onto the pastures, mainly serving the ski runs and mountain farms.

The closest airport is Innsbruck Kranebitten, right to the north-west of the Tux Alps.

About 50 square kilometres of the Tux Alps have been set aside for a military training area, the “Truppenübungsplatz Wattener Lizum”. The northern parts of the Reckner and Hirzer Groups belong to that training area and the highest mountain of the whole group, Lizumer Reckner is also part of it. While in general the whole range is open for hiking and trekking, during military manoeuvres it gets closed.

Signs are posted along all trails which lead into the area, requesting you to make sure that the region is open. Unfortunately I have not been successful in obtaining phone numbers or addresses. Therefore I guess it is best to enquire in the villages before you set out for a hike.

In addition to the weather information on the sites you find under accommodation you can look up this general site:

There are no guidebooks dealing solely with the Tux Alps. Most books are ski tour books which reflects the importance, skiing has in the area.