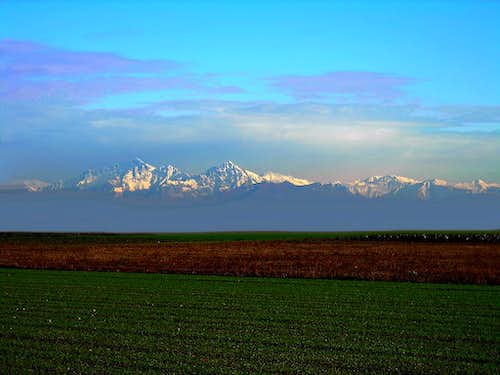 the goal of this page is to introduce some starting knowledge of this wide area, sometimes underrated and often stridden by big quantities of tourists along some popular routes.

Out of those ones this area hosts and offers some very fine environments where nature looks uncontaminated and wild ... despite their nearness to a densely populated country.

Here you will find only the main geographic and logistic info: the complete description of the main summits should belong only to summit pages

With the name of Prealpi Lombarde is normally intended the big area between the Lago Maggiore (Verbano lake) and the Lago di Garda (Benaco lake).
All these mountains, subgroups, groups are quite near to some important towns of Northern Italy, so someone can think of them as tame mountains : nothing wronger than it !
There are a lot of villages, joined by good and bad roads, and a lot of paths, easy and well marked, but, out of them you can often find absolute wilderness and some real danger, first of all the risk to loose bearings and to find yourself in strange situations : the most frequent is the track ending over a big rocky wall.
Differences in elevation are often not small, 1000-1500 m are normal here ...
So, the best way to amuse these environments is well studying maps and tracks before starting or, better, go there with someone who well knows the area.

As previously said with the name of Prealpi Lombarde is normally intended the big limestone area between the Lago Maggiore (Verbano lake) on the west side and the Lago di Garda (Benaco lake) on the east side.
The norther borders are much more difficult to find : geologically it should be the Dinaridi limit (the border of the ancient Tethys sea)

so we can define 3 different sections :

Western Lombardic Prealps
starting from Bellinzona the border arrives, along the Passo di San Iorio to Gravedona, on the western bank of Lario lake (Lago di Como)
north of this border the Lepontine Alps