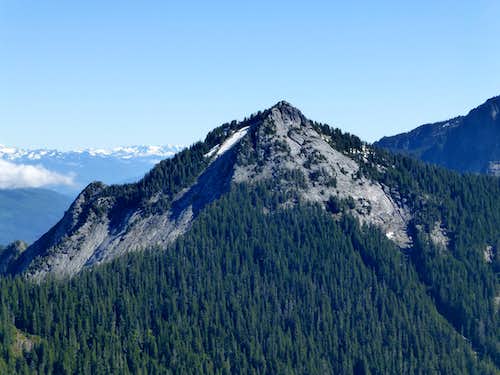 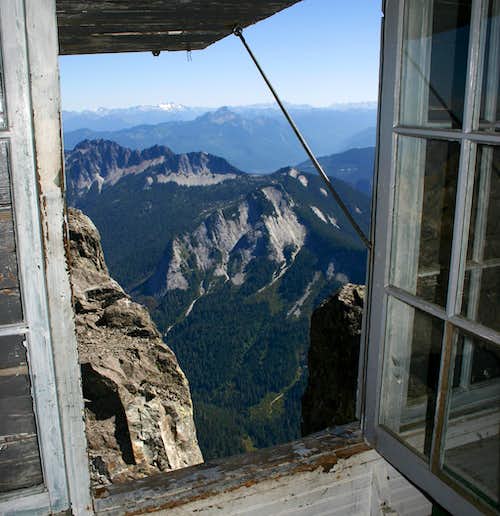 Ulalach Peak from Three Fingers lookout
Ulalach Peak is the unofficial designation given to a 5060' peak located five miles S/SW of Darrington, and one mile NE of Squire Creek Pass. While not particularly tall or prominent, this summit yields impressive 360 degree views, and is a relatively simple scramble from the Squire Creek Pass Trail. In a similar manner to Bornite Mountain (three miles south), standing on the summit of Ulalach Peak gives one the feeling of being 'walled-in' by the higher peaks that encircle it. For those who are interested, the word 'Ulalach' comes from the Chinook Jargon word for 'onion' - my guess is that this relates to the layers of exposed granite that can be seen in several locations on this peak. 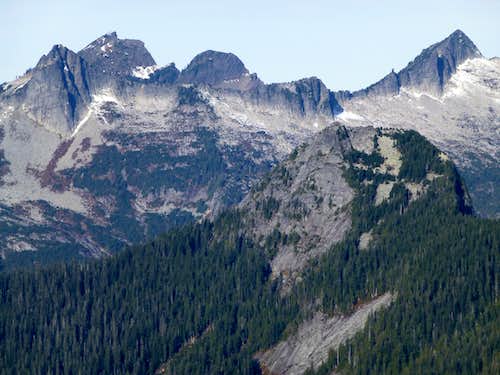 From Darrington, follow the Mountain Loop Highway south for approximately three miles, and make a right hand turn on to FR2060 (Clear Creek Campground will be on the left). Follow FR2060 approximately 5.3 miles to a fork. Take the right fork (straight ahead - FR2065) for 0.5 miles to the Eightmile Creek Trailhead.
Note: It is possible to access the Squire Creek Pass area from the Squire Creek Road, but this will add distance, elevation, and a poor-quality trail to your trip. 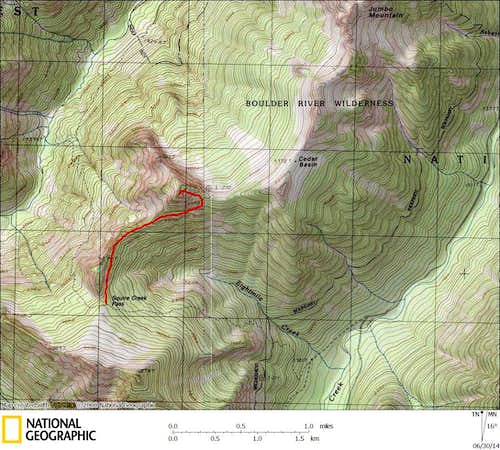 Ulalach Peak route map
Follow the Eightmile Creek Trail for approximately three miles to Squire Creek Pass. The quality of the trail is nothing to get excited about, but it is better than approaching from Squire Creek. From Squire Creek Pass, start a near level traverse on the east side of the ridge that trends north from the pass. After about one-third of a mile, after passing a small cliff band, you can easily ascend to the top of the ridge if you so desire. Follow the ridge crest, or slightly below the ridge crest, until at approximately 4300' just SW of Ulalach's summit. From this point, make a level traverse until intersecting the large granite slabs that make up the south face. 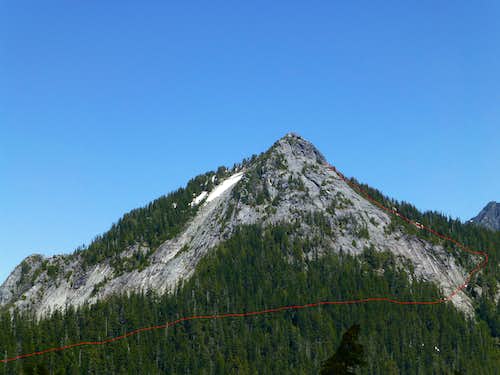 Ulalach Peak from Squire Creek Pass. Red line shows my approximate route.
There are a number of places where one could cross the granite slabs, but I think that I was fortunate to end up at the highest reasonable crossing point (not because of my superior navigation, just dumb luck). The following picture was taken at N48 10.391 W121 37.725 Elev. 4350'. 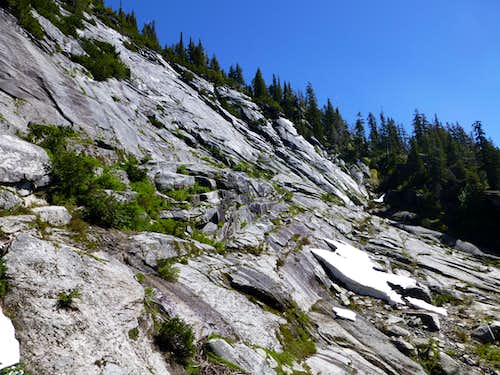 Ulalach Peak South Face from 4350'. From this point, I crossed to the gully on the right third of the photo to gain access to Ulalach's East Ridge.
After crossing the granite slabs, a convenient gully gave me access up to Ulalach's East Ridge. From here, I turned left, and started west towards the summit. The scrambling here was very pleasant, with a mixture of large granite boulders and snow. 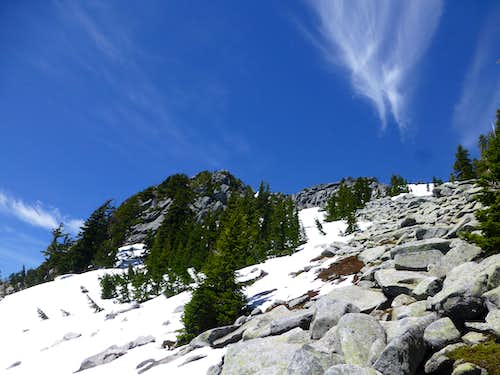 Final scramble on Ulalach Peak. Summit is on the left.
While it is probably possible to scramble up straight towards the summit, I found it easier to stay to the right, and top out on the summit ridge just to the north of the true summit. From this point, easy class 2 scrambling to the south will put you on top. 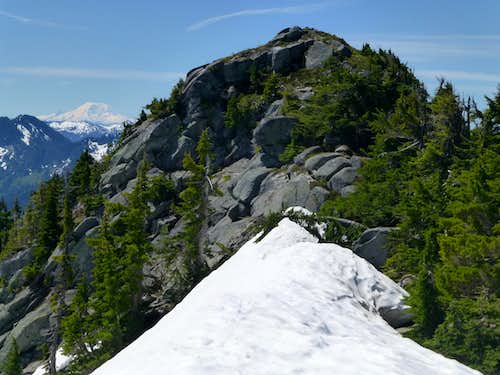 Ulalach Peak summit from north
Views from the top of Ulalach are superb, with the east face of Three Fingers being particularly impressive. 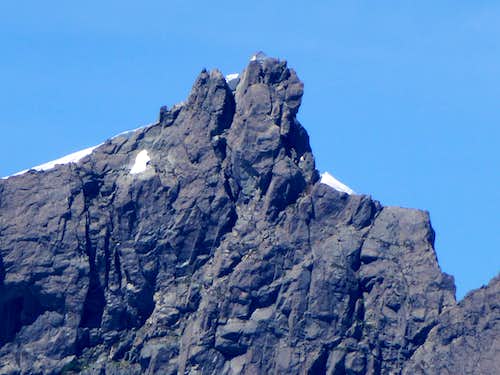 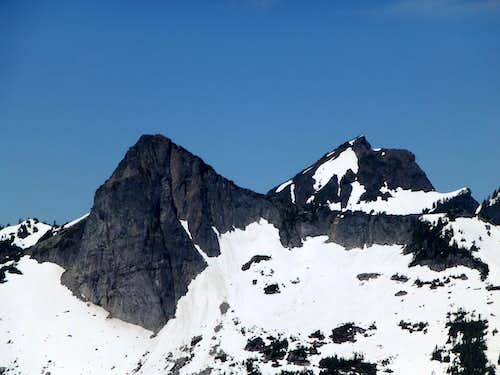 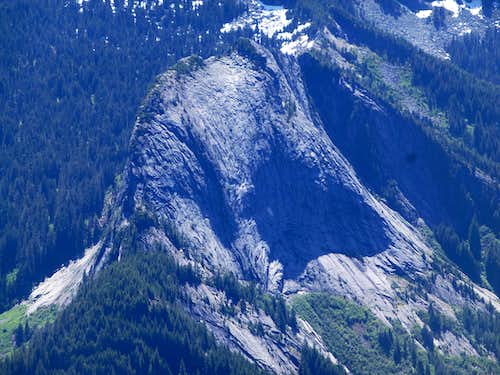 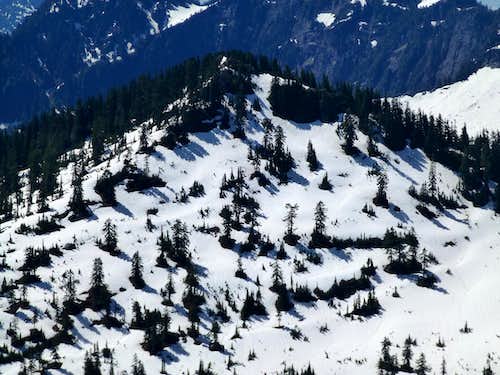 Parking at the Eightmile Creek Trailhead does not require a parking pass.

Any time of year, provided one can drive at least part way up FR2060, and avalanche conditions are not present (please note that there are several steep, bare slopes on this route that would be particularly dangerous during avalanche conditions). Late spring would probably provide optimum conditions, as much of the traverse from Squire Creek Pass would be snow-covered.

The most logical place to camp in this area would be Squire Creek Pass. This would also provide a great opportunity to combine this scramble with a trip up Higher Squire (or Squire Spire if you don't mind a little class 4).