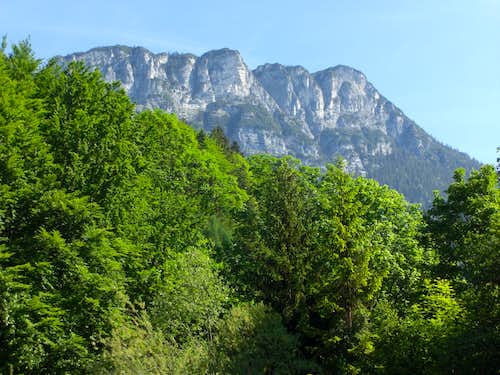 Köglhörndl as seen from Inntal valley

Brandenberger Alpen, Rofangebirge, Sonnwendgebirge are the synonyms for a range within the Northern Limestone Alps, which is in parts rather unknown - despite of its location north of frequented Inntal valley - in parts rather crowded - that is the Rofan subrange in stricter sense.

Brandenberger Alpen are named after the village of Brandenberg, located in the geographical centre of this range, in a sort of hanging valley north of Inntal valley. Rofan is derived from an old latin name, meaning “mountain with mudflow”.

The range is called Sonnwendgebirge (solstice mountains), too, because of the summit Vorderes Sonnwendjoch within the Rofan subrange, dominating the Inntal valley north of the towns of Rattenberg and Jenbach. I like this name for the range most, it sounds more poetic than Brandenberger Alpen and reminds of the huge solstice fires burning on top of the most prominent summits in june. But Brandenberger Alpen is the official geographical name so I will use it for this range.

Brandenberger Alpen are limited by the Achensee valley to the west, by Inntal valley between Jenbach and Kufstein to the south and by several remote mountain valleys to the north. The whole range thus forms a sort of an extended triangle. It is fully located in Austria in the Tirol province.

Brandenberger Alpen are situated between

The range displays a double face: higher and more exposed summits to the west, with steep rock faces and deep valleys (e.g. Achensee valley) and more gentle summits with moderate hights to the east. Nevertheless these eastern mountains are standing high above the deep Inntal valley.

The popularity of the summits and subranges shows the same double face: Rofan and maybe Guffert are often rather crowded, the eastern regions of the range is more unknown to the wider mountain community and you will mainly meet local people on those summits. 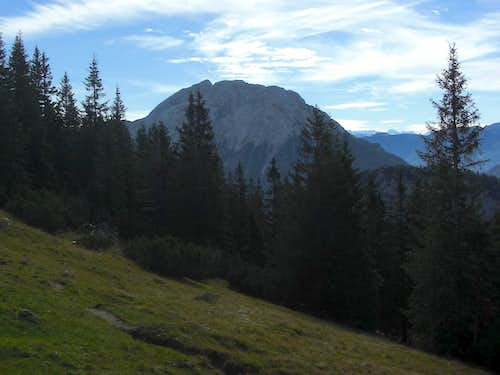 The whole south side is accessible via Inntal valley highway A 12 (toll road) and via regional Inntal valley roads to the different trailheads.

The west side can be reached via road number 181 between Jenbach and German / Austrian border.

The northern parts of the range are accessible via Steinberg am Rofan (road from Achenkirch to the village); via Brandenberg (road from Kramsach in Inntal valley) and via road number ST 2075, Bayrischzell - Landl - Kufstein.

Large parts of the northern Brandenberger Alpen are accessible only via forest roads, closed to public traffic but open to mountain bikers.

Railway services can be found in Inntal valley. The main railway stations for Brandenberger Alpen are:

At Jenbach starts Achensee Bahn, a historical rack and pinion railway with steam engines. Should be a sort of 19th century feeling to arrive with it at your trailhead.

From Bavaria there is a RVO bus service (line 9556) to Achensee.

Brandenberger Alpen can be divided into several subranges. 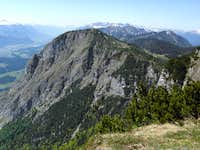 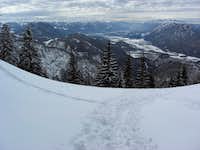 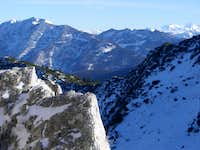 Veitsberg as seen from Blankenstein / Bavaria 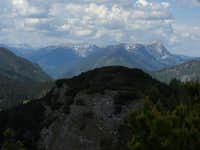 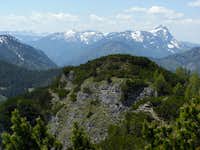 Panorama of Brandenberger Alps and Rofan subrange from Kotalmjoch 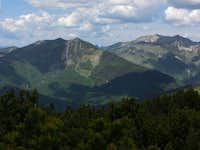 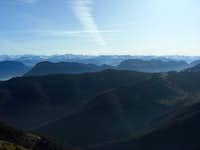 Pendling subrange summits in the middleground as seen from Brünnstein 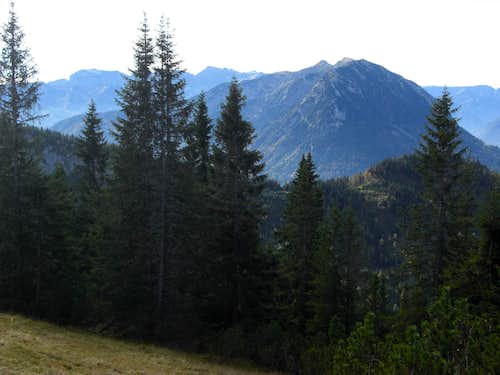 Köglhörndl within Pendling subrange is an outstanding habitat for the snow rose, Helleborus niger.

The Kienberg subrange main summits, Heuberg, Kienberg and Blessenberg, can easily be summited in one day, giving different views into the different corners of Brandenberger Alpen.

Kaiserklamm , a beautiful and impressive limestone canyon, is waiting between Kaiserhaus and Erzherzog Johann Klause for visitors. Don´t miss that !

Guffert is an all – season summit, sometimes accessible even in winter by foot or, if there is sufficient and good snow, as a steep ski - hike, which offers an immense and incomparable 360 degree view.

The Rofan summits are a world apart, due to the special geology, crowded, though, on sunny days. Use late autumn days to explore Rofan, when the cablecar in on maintenance and the skies are clear and endless. A must in summer is one of the most beautiful mountain lakes of Tirol, Ziereinsee, located east of Rofanspitze.

Achensee, deeply carved in the steep surrounding mountains, is like a Norwegian fjord and wellknown for its strong winds. A walk on a trail on its west shore from Achenkirch to Pertisau with a boat trip back to Achenkirch is a nice half days undertaking.

The geological structure of Brandenberger Alpen is dominated by two huge tectonical nappes: first the Lechtal nappe, building the main part of the lower summits of Brandenberger Alpen, as there are Pendling, Veitsberg, Kienberg, Guffert and Unnütz subranges, consisting mainly of Triassic limestones of Hauptdolomit, Plattenkalk and Wettersteinkalk. On those older limestones you might find locally much younger sediments, the so called Gosau of cretaceous age, marking a marine transgression on the older limestones.

The summits of Rofan range belong, second, to the higher tectonic unit of the Inntal nappe which was thrusted above Lechtal nappe during the orogenetic process. These limestones are intensively fold to synclines and anticlines, the main anticlines are “lying” horizontally.

Another interesting geological structure of Brandenberger Alpen can be found at the northern limitation of the range: a huge syncline, called “Thierseemulde”. This syncline within the Lechtal nappe is bearing young sediments of jurassic and cretaceous age and can be followed from Kufstein / Thiersee in the east to Achenkirch valley and the northern Karwendel ranges in the west. 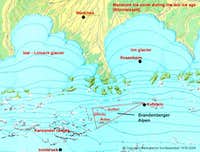 An interesting illustration is the map showing the ice expansion during the latest ice age (Würmeiszeit) within Brandenberger Alpen. The largest part of the range was covered under ice ! At Kufstein the ice surface level was at about 1700 m, around Rofan at about 2000 m. Thus only some Rofan summits, Unnütz and Guffert were surmounting the ice surface as nunataks. 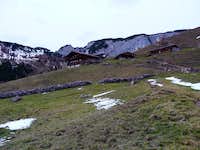 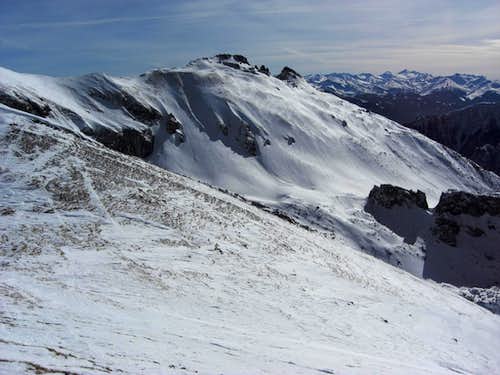 Brandenberger Alpen are an all – season range.

There are many hiking activities possible, from late spring to early winter, depending on the amount of snow.

Climbers will choose the Rofan rock faces or Guffert arêtes for their pleasure.

Ski hikers will have their fun throughout Rofan ranges, Unnütz and Guffert.

In the more remote northern part of Brandenberger Alpen mountain bikers will find many forest roads ready for some interesting loop trips, starting normally in Bavaria within the Bavarian Prealps.

Achensee and its cablecars is a centre for paragliders.

For the lazier ones among us there are two cablecars within the Rofan ranges: 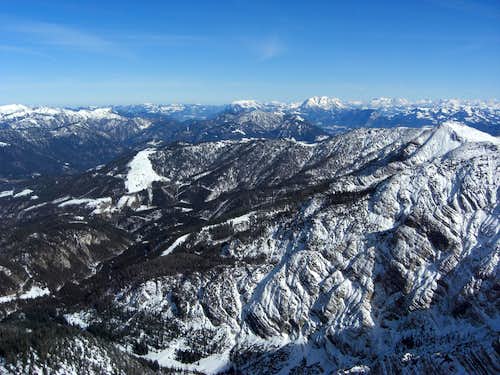 Brandenberger Alpen are mainly covered by the Austrian topographic maps, scale 1 : 50.000, which are fairly good; the 1 : 25.000 series is just a blown-up version of the 50.000 series. However, Rofan range itself is on an Alpenvereins map.

As far as I know there is no guidebook covering the whole of Brandenberger Alpen. There are, however, several guidebooks and those innumerable hiking books mentioning parts of the Brandenberger Alpen, especially Guffert and Rofan. Some suggestions are made below: