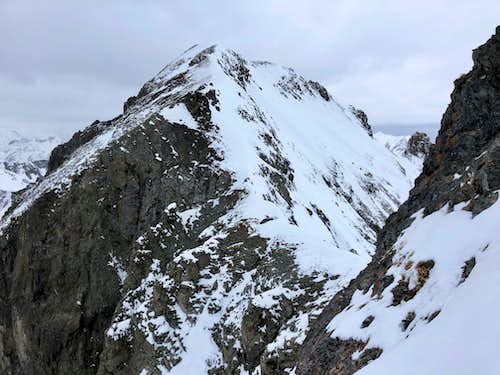 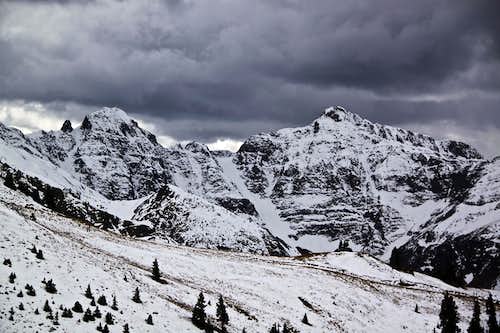 Storm and East Storm, Grand Couloir between them
"East Storm" is sort of a hidden peak close to the historic mountain town of Silverton. It is not seen from any major road and not commonly climbed. "East Storm" is not an official name on maps, it is just another unnamed peak, but it is ranked, and a goal for those who want to complete all 13ers in Colorado. There are 584 ranked peaks in Colorado > 13,000 feet and 764 if counting the unranked ones (less than 300 feet between the neighboring peak). I also have heard a name of Velocity Peak associated with "East Storm". There was a speed skiing championship held there in 1982.
The surrounding area is popular with extreme back country skiing and Silverton ski area is nearby.
"East Storm" could be combined with nearby 13ers: Storm Peak, Tower Mountain, Macomber Peak (unranked) and even Dome Mountain. I have done all those peaks before, and "East Storm" was my only objective. Colorado Rank: 373
Parent Lineage: Line Parent: Tower Mountain   Proximate Parent: Storm Peak
Class: 2Nearby Peaks:

Silverton is about 6 hrs drive from Denver. It is located along a beautiful Million Dollar Highway, US Highway 550. If approaching via Boulder Gulch, drive north from Silverton towards Eureka on County Road 110. The trailhead is not signed and it is just a little bit out of town.

I combining with other mountains, e.g. Tower - drive further up the road and park just before the bridge entering Howardville. 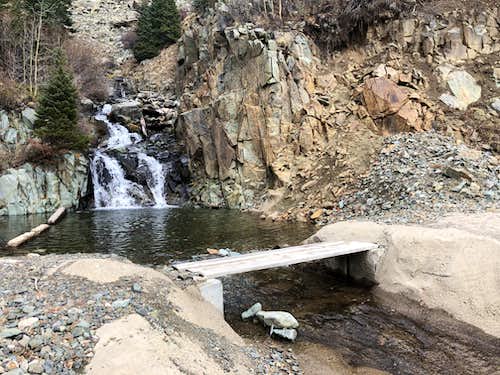 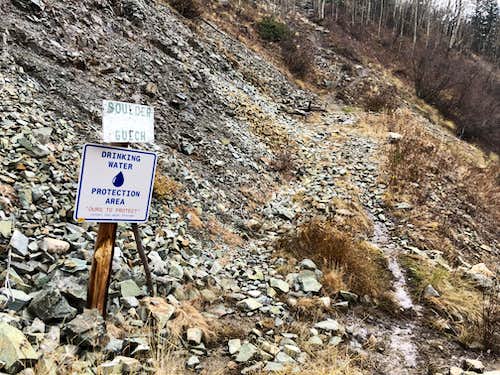 Boulder Gulch
As any mountain there are many ways to approach it and climb it.
I chose Boulder Gulch approach and the south ridge climb (mostly because there was fresh snow and I expected this route to be less deep with snow).
The start of the hike from the County Road 110 had everywhere signs DO NOT TRESPASS and it took me a while to figure out how to approach the start of the hike. Even the hiking project (link below) does not mention any private property issues and there is a road leading to the start of the trail on the map. Anyway, I bypassed the signs and started up the trail marked with 2 signs - area of drinking water and Boulder Gulch. The trail was easy to follow lower down, but higher up there was a lot of snow. The trail was in a great condition.
Initially, you see lower slopes of south sub peaks of Storm Peak and eventually south ridge of "East Storm". I lost a trail here due to snow, but I did notice a few cairns. Gained the south ridge, which is long and goes over a "few bumps". The last sub peak I bypassed on its north side, some exposure here and the final scramble to the summit was unventful.
I think there could be easier route via north - east ridge and towards Tower Mountain. I did not explore this route. There was a lot of snow.

There is no red tape. Driving the 4 WD road outside the Silverton is free and very popular in the summer. If using Bolder Gulch approach, you will be on paved road. Parking is easy and free as well.

Boulder Gulch approach had signs Do Not Trespass, but this an established trail. Follow the road lower done and by the sign of Boulder Gulch follow the trail - no more private property or trespassing signs there.

Cement Creek from the north is better for skiing Grande Couloir - the couloir between Storm Peak and "East Storm".

Summer is obviously the easiest time. Early fall too. I went in late October and there was already a lot of snow on the trail.
Always check northern San Juan Avalanche forecast if venturing out in the winter.