Father Dyer has at least four excellent routes, and none of them are as easy as the routes on the thirteeners around it. In fact, the easiest route to Dyer is from Crystal. Climbers will find all sorts of terrain around Father Dyer Peak. Routes offer scrambling, snow climbing, skiing, and enjoyable ridge runs. Father Dyer's summit block requires some easy scrambling, and leads you to a tiny summit. It's a great place to view the surrounding peaks of the mighty Tenmile.

This peak is definitely a hidden gem of the Tenmile Range. It sees few visitors, and your trip to the top of this mountain will almost surely guarantee you solitude. Father Dyer's Summit
John Lewis Dyer was a methodist minister from Minnesota. As a young man, he fought in the Black Hawk Wars and worked as a lead miner in Wisconsin. He was "called by God" in middle age to preach, and began his career in Minnesota. Originally coming to Colorado in 1861 to see Pikes Peak, he decided to stay and preach to the settlers and miners of the region.

Settling in the town of Buckskin Joe, Father Dyer established himself over the next 29 years and became a frontier legend. Carrying the word of God over the mountians, he crossed 13,000 foot Mosquito Pass several times per week in all weather conditions. He fashioned long ski-like foot covers for the long winters and called them "snowshoes." He preached against many of the favorite activities of miners - gambling, drinking, and prostitution. He married, attended the sick, and gained a reputation as a truly selfless individual. When he needed money, he carried mail to and from the mining camps on preaching trips. A rugged, sturdy man, he wasn't above giving a miner a good thrashing when he was heckled.

Father Dyer has become part of Colorado legend. He is immortalized in the Colorado State Capitol building in a stained-glass likeness along with 15 other founders of Colorado. There are two mountains in the Tenmile-Mosquito Range named for him - this one and Dyer Mountain. The Father Dyer United Methodist Church in Breckenridge was built by Father Dyer in 1880, mostly by hand.

"I started alone for Buckskin Joe, by the Weston Pass. At timber height I was met by a severe snowstorm. The prospect was frightful. I prayed and dedicated myself to God. I never saw death and eternity so near as then. I resolved to keep moving, and when I could go no more, would hang up my carpet-sack, and write on a smooth pine-tree my own epitaph - LOOK FOR ME IN HEAVEN" From Hoosier Pass, south of Breckenridge on Colorado 9, go 7.6 miles north to the well-marked Spruce Creek Road. Turn onto the Spruce Creek Road, and follow it for approximately 2 miles to an obvious parking area.

4 wheel drive vehicles with high clearance can proceed much further. Go past the obvious parking area, and come to a Y in the road. Take the right of the Y. Soon you will come to another Y, and again, you should veer right. When you make this right turn, you will be passing through an open forest service gate. Go past the turn for Francie's Cabin, one of the 10th Mountain Association Huts, and continue up the road past treeline. After 2.3 miles, you will arrive at the Lower Crystal Lake. This is as far as you can drive.

There are several pullouts along this 4x4 road if you decide to bail out and walk the rest of the way. The worst section is near the middle where a number of large rocks line the roadway. A standard 4x4 should be fine for the road, but I wouldn't try it without skid plates.

This is a great alternative to get a little closer without potentially damaging your vehicle on the 4x4 road described above.

At the first turn-off, veer right toward Mohawk Lakes instead of going left. Travel about one mile until the Wheeler Trail intersects the road. Turn right and drive 100 yards to a gated closure. Park off to the side of the gate - Never block it. It is a private access road for Aqueduct maintenance. This is accessible with 2WD.

The TOPO below shows the routes available. 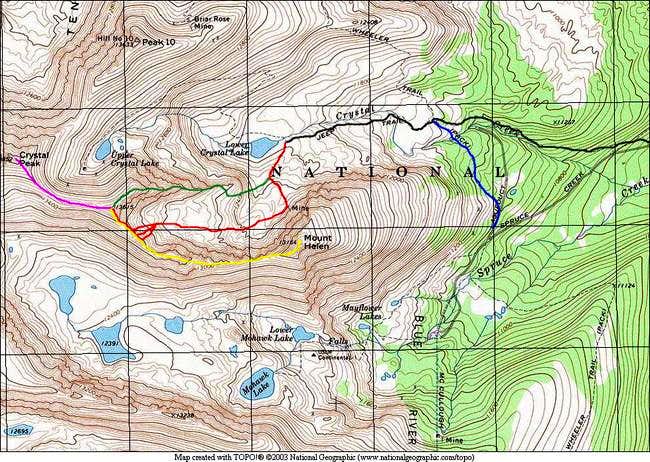 No red tape for this one.

Francie's Hut, a 10th Mountain Association Hut, is along the route.

There are no formal campsites in the area.

Click here for a high altitude NOAA forecast for this area.