North Star Mountain lies directly on the Continental Divide just west of Hoosier Pass. On the topo maps the name of the mountain appears near the center of the long summit ridge, but the western summit is the highest peak on the mountain. North Star is commonly over looked due to its location amongst some of the easiest and most popular 14ers in Colorado (Quandary to the north and the trio of Lincoln, Bross and Democrat to the south).

Most hikers who have driven over Hoosier Pass have undoubtedly looked at North Star and wondered what it might be like to hike its long summit ridge. Steep slopes abound on all sides except for the east ridge which starts on Hoosier Pass. On a map the 7.8 miles and 2650 ft round trip appear to account for no more than an easy afternoon stroll. It isn't until you get on the ridge proper that you realize that there are two very prominent false summits and 6 closed contour lines that stand between you and the true summit. All the ups and downs on this moderately rugged ridge make for more work than the topo suggest.

Due to the lack many guidebooks on North Star you can expect it to be less crowded than the 14ers. Other than passing below one possibly avalanche prone slope right at the beginning, the East Ridge route should provide for a fairly safe winter route.

North Star is affected by some private mining claims so access can change at any time. 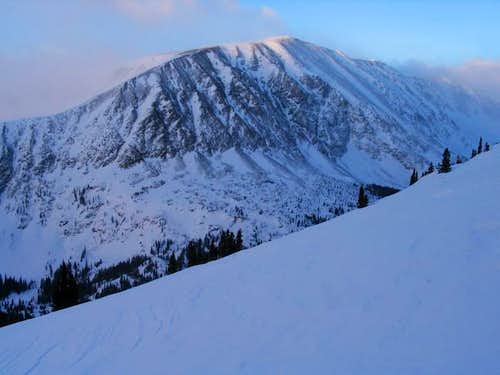 The north face of North Star Mountain as seen from the East Ridge of Quandary.

The trailhead is located in the large parking area west of CO Hwy 9 atop Hoosier Pass. The pass can be reached by traveling CO 9 south out of Breckenridge or north out of Fairplay. The trailhead is accessible year around. 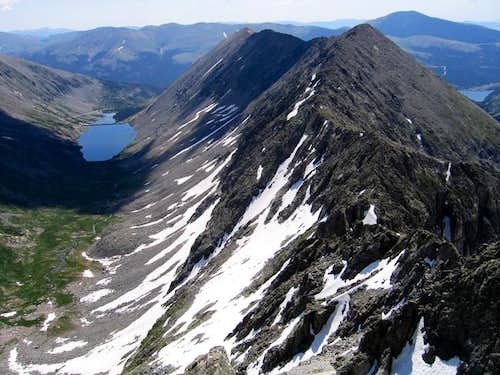 North Star Mountain and Blue Lakes from the summit of Wheeler Mountain.

The only route I am familiar with is the East Ridge, which is a fairly easy ascent year round. See below for how to avoid most of the avalanche danger in winter. The class 2+ east ridge route is 7.8 miles round trip with 2650 feet elevation gain. See the route page for more details.

The mountain appears to have some interesting couloir routes if private land is not an issue.

The North Star to Wheeler Mountain looks interesting and some have carried this challenging ridge all the way to Mounts Democrat and Lincoln making an entire circuit of the Wheeler Lakes/Platte Gulch Basin. If and when the access issues are resolved, this will make a fine climb when the weather is good. 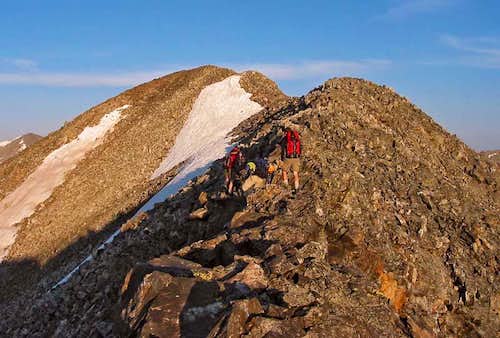 There is no red tape as it is located in National Forest, but there are some private land issues. There are also numerous old mine sites along the standard East Ridge route, but nearly all can be avoided. All should be avoided both for your safety and to respect the private properties of others. The only posted signs are those along the road leading to Magnolia Mine. This is avoided by continuing more directly uphill towards the East Ridge proper.

The mountain can be climbed year round. The ridge proves to be much more work when covered in snow.

The standard summer route crosses below a few avalanche prone slopes, but they can avoided by staying on the ridge proper rather than following the summer trail. There is a slope right at the beginning that could slide under the right conditions, but usually this will be a pretty safe winter climb.

In summer, be sure to get an early start to avoid thunderstorms as the route is very exposed and bailing out may land you in less than desirable terrain. 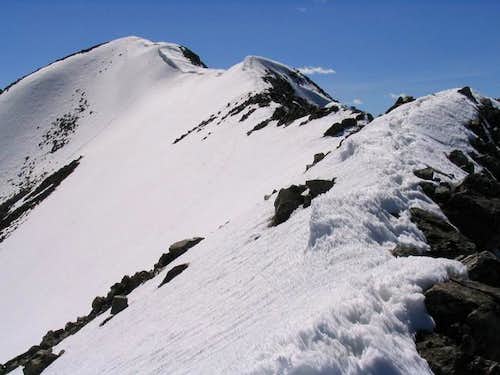 North Star Ridge in late May.

An area suitable for campsites can be found about 1/4 mile from the trailhead. There are no fees, facilities or designated campsites. The climb is short enough that making it into a backpacking trip would be pointless and there doesn’t seem to be any good campsites on the mountain itself anyway

Below is the climate summary for nearby Climax at 11,300 feet elevation, and about the same elevation as the trailhead. These are all averages, so expect more variation, but this will give you a good idea about the climate at higher elevations in the area. It should be about 10 degrees colder around the summit in the summer season. *National Weather Service Data 1949-2005.