Handwerk Peak is a twin summited mountain located in the heart of the Pioneer Mountains in central Idaho. 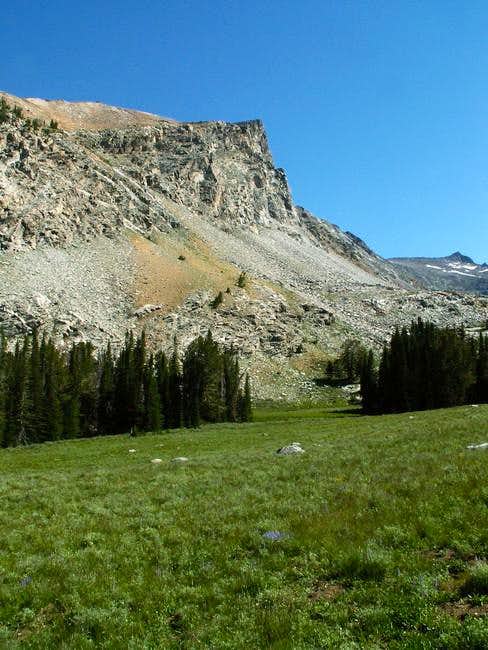 Handwerk Peak is geographically nothing more than a southern extension of the much larger and higher Goat Peak to the northeast. However, it has been called one of the most unique and inspiring peaks in the range with its twin fangs and beautiful rock.

With the exception of its southwest slopes, Handerk is a very rugged peak. It has two sheer, rock faces that plummet thousands of feet to the valleys below, as well as the two aforementioned summits that resemble fangs of a wolf. Its southwestern slopes are made up of a sandy type soil that appears as a light yellow when viewed from a far. The summit is made up of black granite that contrasts nicely with the sandy slopes below.

Neither of the summit's elevations have been clarified by the USGS, nor is anyone sure which one is higher. It seems the very exposed east summit may be a tad than the somewhat mellow west summit.

Because Handwerk Peak sits in the heart of the some of the highest Pioneers, yet is about 6-800' lower in elevation, a view from the summit offers the best views of anywhere of Goat Mountain, The Salzburger Spitzl, Florians Nudl, and Duncan Peak. But also because of its lower elevation and ragged appearence, Handwerk Peak is rarely climbed by anything but the mountain goats that call it home.

To access the Handwerk Peak trailhead from Hailey, Idaho, drive north on Highway 75 for 7 miles until reaching a stoplight marking East Fork Road.

To access from Ketchum, drive south on Highway 75 for 5 miles until reaching the stoplight that marks East Fork Road.

Drive up beautiful East Fork Canyon past the old mining town of Triumph until the road turns to dirt. Continue 1 mile until reaching a fork in the road. Turn left on the improved dirt road that follows Hyndman Creek 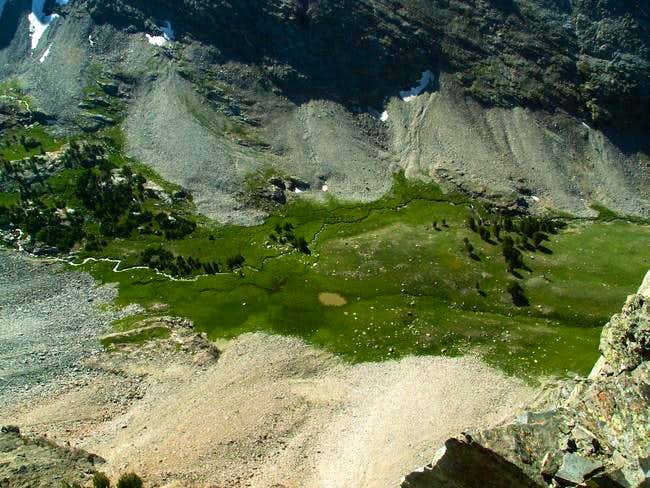 Drive to the end of the Hyndman Creek Road, or about 5 miles from the turnoff. All passenger cars are able to drive to the end. Continue past one trailhead and parking area to a faint road that leads a little ways up the North Fork Hyndman Creek. Park here in the next pullout once the road comes to an end.

From the trailhead at the end of Hyndman Creek Road, hike approximately 3 miles on relatively mellow terrain on the North Fork Hyndman Creek Trail.

Once you have reached the point where the trail suddenly switchbacks up the mountain to your west, search for a faint trail that continues further up the basin. Take this trail as far as you can and the bushwhack to the 8,800' countour line remaining west of the creek.

From this point, turn east and head for the southwest ridge of Handwerk Peak. Cross the many streams (difficult with highwater), cross through a small marsh, and climb up small limestone gullys to reach the sandy southwest slopes below the peak.

The southwest ridge begins on a broad slope that is made of a sandy mixture of soil, creating a very difficult climb to the actualy ridge above. Stay near tree clumps and rocky ridges for best the best footing. 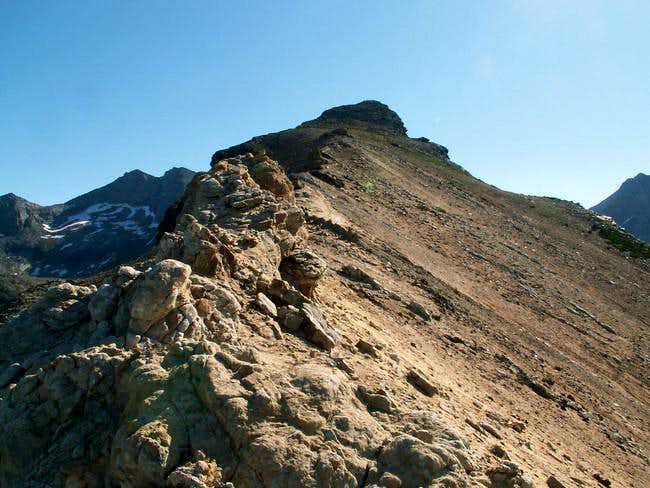 Once you have made the exhausting scramble to the ridgeline above, continue climbing northeastward on improving steadily improving rock. Once you come across some small cliffs, drop to the south side of the face and contour around them.

From here, the ridge line is obstacle free. The last few hundred feet is on steady, enjoyable granite.