Peak 10,805' lies deeply hidden in the Pioneer Mountains of central Idaho. It is not a well known peak but is certainly unqiue and rugged. 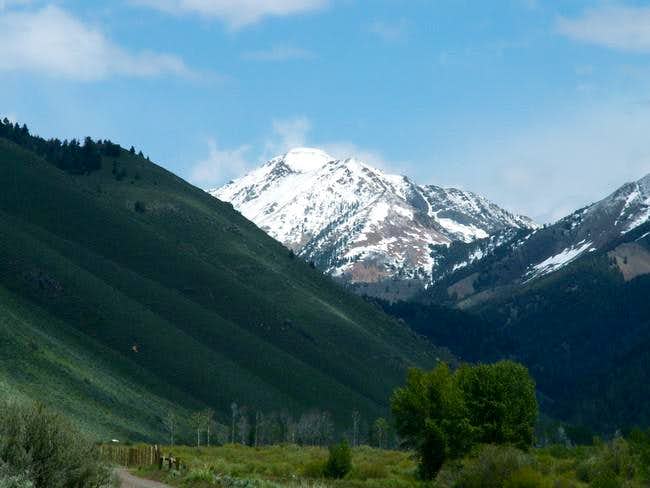 Although not as impressive as it's surrounding Pioneer neighbors, Peak 10,805 rises apruptly out of the valley floor creating one of the many rock walls that tower over the beautiful East Fork Valley. Five spiny ridges spiral outward from the thin, arcing summit ridge, which forms the look of a starfish on a TOPO map. But perhaps what gives this mountain the most distinction is the multi colored rock that forms layers of pink and gray.

Like most peaks in Idaho, this one is rarely climbed. The fact that Peak 10,805 is not named, not a high point, and stands near some of the few popular Pioneer Peaks leaves little to be desired for those with not much climbing time on their hands.

The easiest route up Peak 10,805 also contributes to the fact that few climb it. A sustained, and tiring, class 2 climb on boulder fields leads 1,300' up from a trail pass reached by a trail. For the most part the main route is confined to scree and boulders, a few class 3 moves are required to ascend this peak.

Peak 10,805 is located near the resort towns of Ketchum and Sun Valley, as well as near the Friedman Memorial Airport in Hailey.