The Devils Bedstead West is located in the high and rugged Pioneer Mountains of central Idaho. 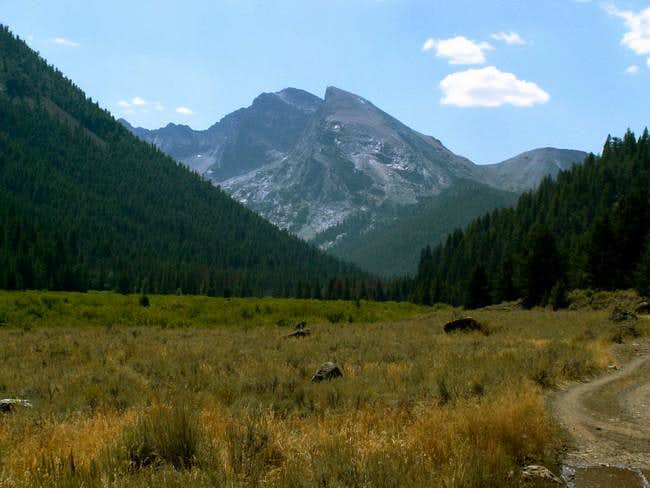 The Devils Bedstead West is double-summited, and complex mountain. Its appearence is quite different from every direction which it is viewed. The Devil Bedstead West's much more rugged north summit sits around 250' lower than the true summit and is an impressive steep-sided spire that has no official route to the top. The Devil's true south summit is a large dome shapped peak that dominates the Kane Creek Drainage. Its south face resembles a miniature version of Half Dome in California with large granite face that looks as though it has been chopped in half, while rugged cliffs and towers face the northern and eastern sections of the mountain. This mountain, with the exception of its west ridge, is almost impassable.

There is some confusion as to which mountain is the true Devils Bedstead. The Devils Bedstead East, which sits more than 800' higher and directly across the valley, is the more impressive of the two but was not officially given a name. Its striking presence from Trail Creek Road over the years lead people to believe that was the Devils Bedstead, as it is the only named mountain in the area. However, because of the Devil Bedstead West's prominence across the skyline of Kane Creek, the USGS tagged the name Devils Bedstead on the lower 11,051' peak across the valley. Today, the confusion is still there as the sign along Trail Creek Road still mis-identifies the peaks, though true mountaineers and locals of the are aware of the difference.

Despite its rugged appearence the easiest route up the mountain, albeit long, is a class III climb. The scramble portion of the climb is quite short, yet exposed, and will stop many unexperienced hikers.

The Devil Bedstead West's counterpart across the valley, is one of the most highly visited summits in the state of Idaho. Though very few people have ever even seen the top of the Devils Bedstead West as there is no rock cairn or sort of sign that some one beside the USGS crew have summited.

To access the Devil Bedstead West's West Ridge Via Kane Creek Route. drive from Ketchum, Idaho northeast on Trail Creek Road to Trail Creek Summit. Continue over the summit for about 6 miles until reaching the turnoff for Kane Lake Road on the east side of the road.

Set your speedometer here to be sure about your location and where the road infinetely ends. It is 4.7 miles exactly from the turnoff.

Kane Lake Road is very rugged and requires a four-wheel drive, high clearence, vehicle. The first few miles are slow going but not particularly rough. The road crosses Kane Creek on a good bridge around 1.5 miles. 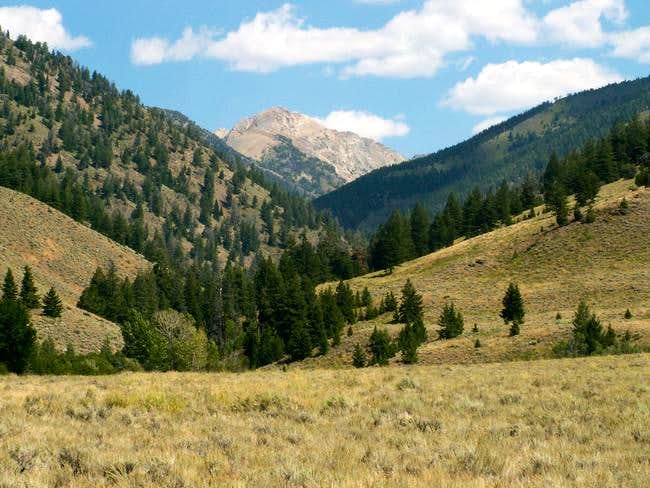 Near the 3.5 mile mark the road fords Kane Creek, which is impossible in spring or early summer and rough on vehicles any other time of year. If the stream crossing is not to your liking, park here and add an extra mile to the climb.

The last mile of Kane Lake Road is very slow and ends at another crossing at Kane Lake Trailhead.

No red tape or permits required for the Devils Bedstead West.

If approaching via Kane Creek, the road is usually not passable until August because of wet conditions.

Although winter ascents have been reported, they would be quite dangerous and difficult, mainy due to access concerns.

The Devils Bedstead West is usually snow-free by late-July and stays that way through September.

Many people opt to car camp either at Kane Lake, or Summit Creek Trailheads. There is also wonderful spots at the base of the south face of the Devils Bedstead or at the high meadow of Summit Creek to camp.

Otherwise, Phi Kappa and Park Creek campgrounds are located nearby.

The Devils Bedstead West is isolated and quite remote and is not located near any major reporting weather stations. Here are some links for a general idea of what local conditions may be like in the area.