The Box is located directly on the main crest of the Pioneer Mountains in central Idaho. 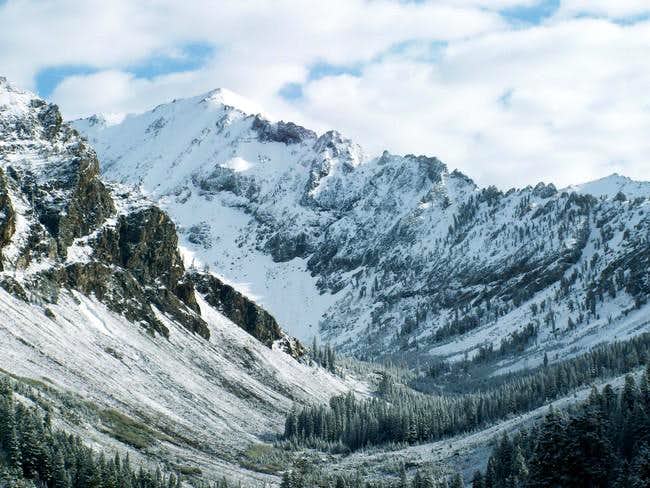 The Box is a beautiful peak that sits at the head of the Left Fork Wildhorse Creek, East Fork Big Wood River, and Box Creek. It is protected on all three faces by steep walls made up of loose and rotten rock.

The Box's unnclimbed north face is a sheer wall that drops 1,500' to an unnamed lake below. The southwest face is steep and made up of red and white rock shale that creates an unforgettable backdrop to the headwaters area of the East Fork Canyon. The southeast face that rises boldly above Upper Box Canyon Lake is primarily composed of bright white limestone reminiscent of a summit in the White Cloud Mountains further north.

The Box sees relatively little traffic most likely due to the fact of the very rough road to access the trailhead, peakbaggers and headed for nearby higher mountains, and its intimidating appearence from every direction. Most are suprised to learn that the easiest route to the summit, albeit quite strenuous, is an easy class 3 climb. The summit has some of the best views of the Pioneer Triumvite and Wildhorse Canyon to be found.

To access The Box, a high clearence and four-wheel drive vehicle is an absolute must.

The first few miles of this road is on good pavement through various subdivisons. After passing through the old mining town of Triumph, the road turns to dirt and forks. The left fork heads up Hyndman Creek toward Hyndman Peak and the right fork continues heading up East Fork.

Take the right fork and drive on a very nice dirt road to Sawmill Campground. After here, the road slowly begins to deteriorate and especially so after pass Federal Gulch Campground. From the second CG, allow on 45-60 minutes for the last 4.5 miles on the road.

Some sections are very rough but it is generally just slow going. At one point, the road breaks into a field with stream running down the road and some parking to the side. This is the trailhead for PK Pass. Some may want to park here and walk the last .3 miles to the trailhead for Johnstone Pass, or the end of East Fork Road.

This route requires the least amount of technical scrambling of any route other route that leads to the summit. The south ridge requires class 5 climbing and the east ridge is class 4.