Goat Mountain is located in the Pioneer Range of central Idaho. 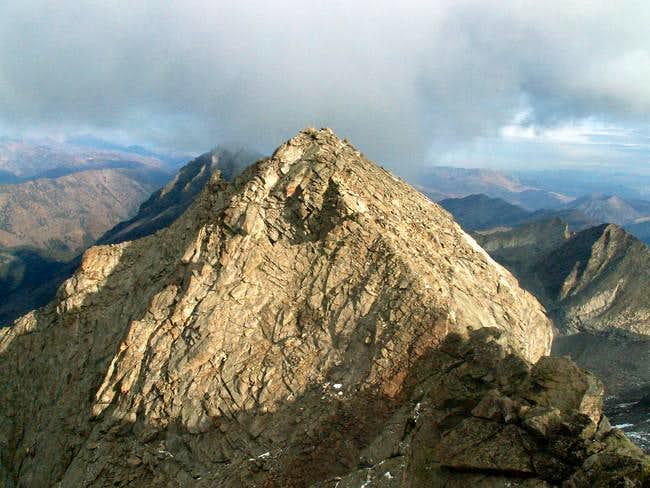 Goat Mountain is an outstanding peak that rests in the heart of the Pioneer Range on the main crest and at the headwaters of Kane Creek. It has two, twin summits that are within two-tenths of a mile of each other. The northern summit is the highest and referred to by locals as Kane Peak. Sitting at 11,913', it is the second highest mountain in the Pioneer Range and 16th highest in the state of Idaho. The southern summit, known to most just as "Goat", is lower in elevation by just a few dozen feet and is very rugged.

Goat's indistinguishable twin summits, enormity, and heighth put it among the most and easily recognized Pioneer Peaks along with the famed Trium-Vir-Ate and the ubiquitous DBE. Goat Mountain also has the honor of possessing some of the range's most stable, solid rock, allowing for many technical routes to lead to the summit. 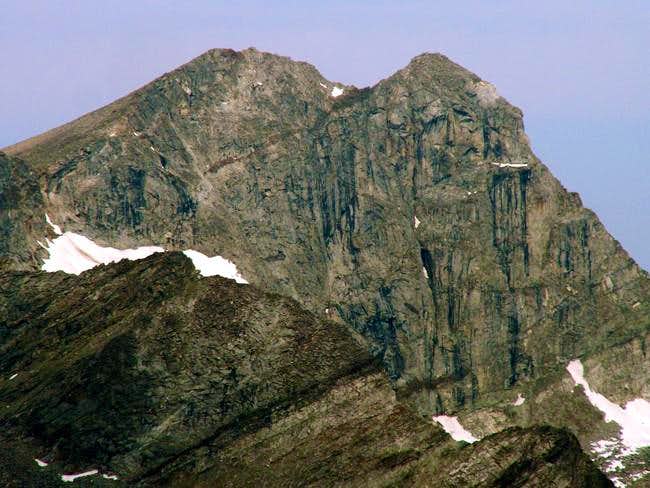 Goat's summit is one of the most difficult to reach and climb in the area for it is a rather rugged and remote mountain. Perhaps the most notable geologic feature on the peak is its vertical, 1,000' north and east faces, which are made of solid granite. Its west face, though not as impressive as the others, is ragged, unnclimbed and boldly faces hiking areas in around the nearest towns, Ketchum and Sun Valley. Its southern slopes, the standard route, are as different as day and night as wide open slopes and boulder fields nearly extend to the summit...Nearly.

A summit register was in left in 1971 by the Decker Flats Climbing Club in the form of a film canister. Since then, in 1999, a climber from Boise respectfully preserved the original register and placed it, along with new paper and writing utencils in a proper register canister. This little box is the only place with information on climbing some of Goat's impressive routes and walls including the northeast and western ridges. It is certainly worth an extra 10 minutes on the summit exploring the names of the experienced climbers who have summited. An average of 1-2 parties climb Goat Mountain yearly, making this a moderately traveled peak for Idaho. The easiest route involves a long day and exposed traverse between both summits. It is a rewarding accomplishment for all who reach this peak.

Sitting at 11,500' on the Goat Mountains east ridge is an amazingly steep rock feature named the Florians Nudl. This pure granite spire dominates the view on the Southern Slopes approach is quite enticing.

It is a popular destination for local rock climbers and after thorough examination, I determined the summit is only accessible by utilizing highly exposed class V routes. 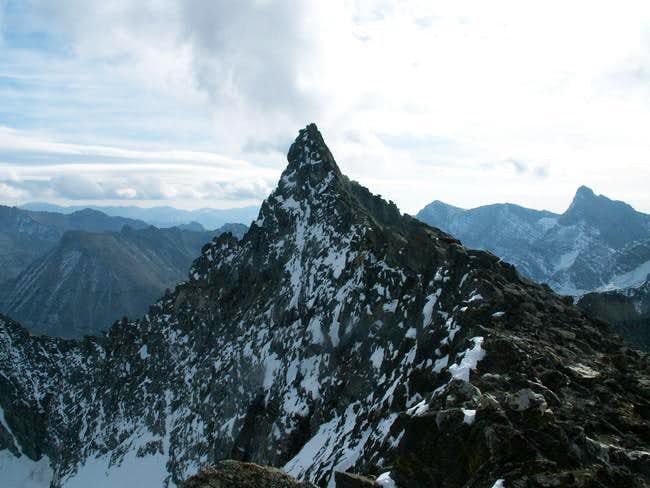 To access the Southern Slopes Route (standard) from Hailey Idaho, drive north on Highway 75 for 7 miles until reaching the East Fork Road leading east from the highway at a stoplight. If coming from Ketchum, travel south on Highway 75 for 75 miles and take the same road.

Take the East Fork Road about 10-15 minutes through several subdivisions until reaching the old mining town of Triumph. Shortly after reaching Triumph, the road turns to dirt and forks. Take the left fork.

Follow this grade-A dirt road a few more miles until reaching a sign that says "Road closed in 1 mile.". From here, the road narrows and traverses across a hillside but remains passable by all vehicles.

East Fork Road then comes to a large parking area for Hyndman Trailhead. Don't be confused but this is not your trailhead. At the far end of the lot, look for a faint jeep road that continues due north paralleling the North Fork Hyndman Creek. Take this less than one-tenth of a mile to reach a second small parking area. Park here.

Only red tape in this area is the impressive ranch one passes if heading up Hyndman Creek. The people who live in this ranch have the ability to shut the road but thankfully have opted to leave it open. Please respect the ranch and stay away from the tennis courts and swimming pools.

Goat Mountain is home to many Mountain Goats and while it may be impossible ,depending on which day you are climbing, to avoid coming within close contact with these creatures (there are really that many), please try.

The East Fork Road is closed within a few miles of the trailhead during winter. As is Kane Creek and Wildhorse Roads.

The standard route, just before the summit, requires a traverse along terrain that has a north and east exposure. At nearly 12,000' in Idaho, this means this is only a small window of opportunity for climbing this route dry. It is best to aim for late-August until the very first snow flies for climbing as any snow on the standard route would make things very difficult.

Since 1971, no one had ascended in winter, most likely due to the extreme nature of the terrain and accessibilty issues.

Camping is popular choice for climbing Goat Mountain. The stunning basin along the approach of the standard route below Handwerk Peak and Duncans Peak is ideal for camping. Kane Lake and the Wildhorse lakes also offer up a beautiful setting for those wishing to view the climb the night before the attempt.

There are also many nearby campgrounds with good facilities including, Phi Kappa, Park Creek, Wildhorse, Sawmill, and Federal Gulch.

It would also be a good idea to car camp at any of the marked trailheads in the area. This is the common choice.

Pioneer Cabin may also be a choice for camping the night before. This cabin, somewhat resembling high mountain cabins in Europe, is infested with rodents and not maintained. Bring plenty of bug spray if intending to spend the night here.