Rising from the vast Snake River Plain with an extensive set of foothills, the Pioneer Mountains are Idaho's second highest mountain range and in some ways it's most enticing. The highest point of the range is Idaho's 9th highest peak, Hyndman Peak at 12,009 ft. It also has at least 15 other peaks that rise above 11,500 ft. besides Hyndman.

Only the Lost River Range is higher than the Pioneers. Although the Lemhi Mountains even farther East contain 12,197 ft. Diamond Peak the rest of the range is significantly lower (although still high) than the Pioneers having only 2 other peaks besides Diamond that rise above 11,500 ft. 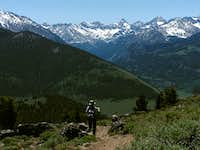 In addition to altitude the Pioneers also boast great rock for climbing and a vast amount of impressive faces and jagged peaks. The range has almost limitless opportunities for scrambling, hiking, and technical climbing. There is something here for everyone.

The Pioneers stretch nearly 50 miles in length between Ketchum and Arco, trending generally East-West and reaching nearly 25 miles in width. This is somewhat unusual as most Idaho mountain ranges (and Western U.S. ranges ) tend to go North-South. There are only a few other ranges I'm aware of with this directional tendency. The Uintas of Utah are the largest such range, but others include the Raft River Mountains, Traverse Range and Black Mountains also of Utah. Colorado has a number of East-West Ranges as well, including the Elkhead Mountains, Williams Fork Mountains, and Danford Hills. The San Juan Mountains can also be thought of as having this directional tendency but they are more of a large mass of mountains than a narrow ridge leading in one direction. (Info courtesy of SP user Scott.) 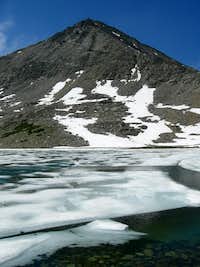 The Southern slopes of the Pioneers are hidden by a vast system of dry, mostly treeless foothills, while the Northern side is blurred into the beautiful Copper Basin, the Boulder Mountains, and the Lost River Valley.
On the West, the Wood River Valley forms it's boundary and seperates it from the Smoky Mountains. On the East the boundary is formed by the Lost River Valley and the White Knob Mountains.

Glaciers have left their mark on the Pioneer Mountains, as with most Idaho mountains, carving out many large U-shaped valleys including Wildhorse Canyon, Fall Creek, and Kane Creek to name a few. There are also abundant cirques and glacial lakes. Among the high lakes of the Pioneers is Idaho's highest lake, 10,438 ft. high Goat Lake. There are many other stunning lakes over 10,000 ft., all among Idaho's highest.

Because of the range's proximity to Sun Valley there are some areas of the range that see a lot of traffic year-round. Because Sun Valley is, of course, primarily a ski resort there is actually quite a lot of winter activity in the Pioneers, especially in the areas closest to the resort. Wildhorse Canyon is a popular destination in the summer as there is a nice campground located there and the scenery is astounding. The more remote sections of the range are near Copper Basin in the Eastern section of the Range, where there are many high, but seldom visited mountains. 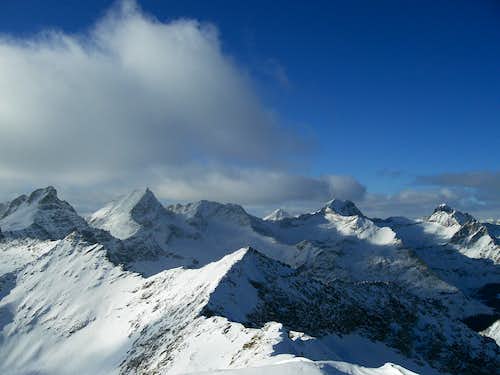 The Pioneers are a dry range, sitting in the rain shadow of the mountains to the East and North. The arid Snake River Plain forms its Southern boundary. What timber there is is found mostly on North facing slopes in the lower to mid-elevations. Another reason for the lack of substantial timber is that in addition to being dry, the terrain in the higher portions of the range is either too high or too rocky for trees to take hold. This does not stop extraordinary trees from growing in the range though. The oldest known living Limber Pine was discovered in the range in 1953 by dendrochronologist Edmund Schulman at 1,650 years old (Lopez, 244). Temperatures can range from extremely hot in the summer to extremely cold in the winter. The hottest portions of the range are the southern foothills near the desolate Crater of the Moon National Monument where temperatures can easily reach above 100 degrees. As can be expected, the higher you go the cooler you'll be. Temperatures can be very comfortable higher up in the mountains during the summer although the wind is nearly constant. 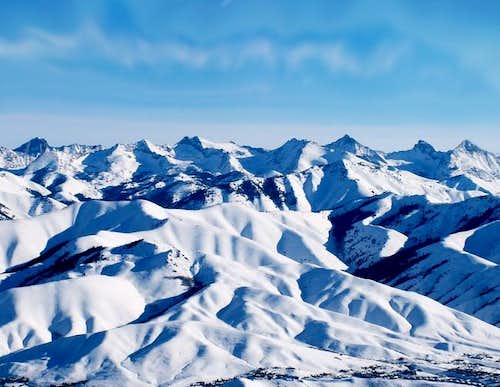 Winter in the Pioneers

The winter can be bitterly cold with temperatures dipping below zero. Even though Sun Valley sits at the foot of the Pioneers the range doesn't see as much snow each winter as do some of the other nearby ranges such as the Sawtooths to the Northwest. Because of elevation what snow the Pioneers do receive can linger on into August in the shadows of the higher peaks. Here is a link the the Forcast for Sun Valley at the Western edge of the range. For the Eastern part of the change check out this link to the forecast for Arco. This is a table of the average temperatures, and precipitation amounts for Sun Valley as well as records.

The range is managed by the Sawtooth National Forest on the South side of its crest and by the Challis National Forest on its North side. The county line of Blaine and Custer Counties also follows the Pioneer Crest. A portion of the Pioneers has been proposed for wilderness designation but no action has been taken as of yet. 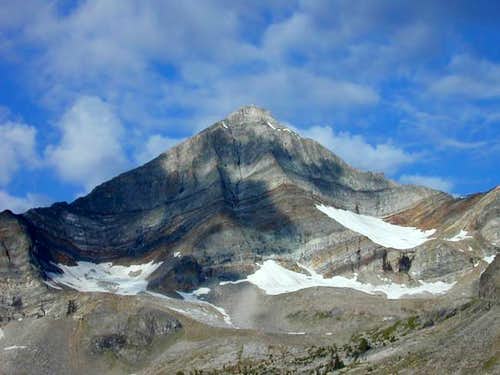 Hyndman from the northwest flank of Howard far up in the Wildhorse drainage. 7/31/05

Here is a list of some of the major peaks in the Pioneers. There are of course many more named and unnamed 10,000+ ft. peaks in this range but if I were to put every peak on this table it would turn into a gigantic project. Luckily there's already a book out there with EVERYTHING in it. If you want more information, I refer you to the link at the bottom of the page for Tom Lopez's book. 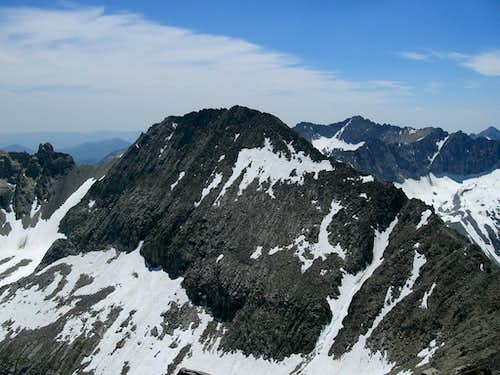 The summit of Standhope Peak gives an exceptional view of 11887 and its North ridge. Photo by Matt Durrant on July 4, 2008.
*The Class column refers to the easiest route. 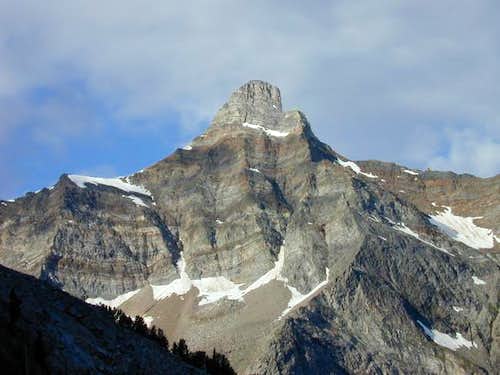 Old Hyndman from the northwest ridge of Howard. 7/31/05 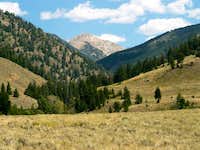 The Devil's Bedstead West from Trail Creek Road
This road runs from ID-75 in the town of Ketchum, over Trail Creek Summit where the Boulders and the Pioneers meet, and into the Lost River Valley near Chilly, Idaho (North of Mackay a few miles.) where it joins ID-93. The road is usually in good condition and is paved for a ways on both sides. The majority however it gravel. Trail Creek Road provides easy access to many climbs in the Western and Northern sections of the range. Wildhorse Canyon is accessed from this road as well as Copper Basin, making it the primary access route for the range. The Pioneer Cabin Trail is also accessed from Trail Creek Road. 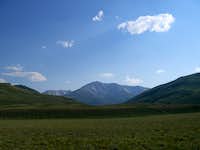 Big Black Dome from Copper Basin
Copper Basin is a large dry valley in the Eastern Pioneers. The Copper Basin Road splits off from Trail Creek Road about 22 miles East of Ketchum and heads South towards the very scenic Wildhorse Canyon. At the mouth of the canyon the road divides again with one part continuing South to the Wildhorse Campground. The other part heads East into Copper Basin and joins the Copper Basin Loop. The loop road is very narrow and dusty but it provides access to many of the highest peaks in the range, including 11,887 (The Fin), Standhope, and Altair. These peaks are accessed through Broad Canyon on the West side of Copper Basin. The loop road also provides acces to Bellas Canyon, Bear Canyon, Muldoon Canyon, The Starhope area, and many other peaks and Canyons. In addition to the three peaks mentioned above Pegasus Peak, Pyramid Peak, Big Black Dome, Glide Mountain, Copper Basin Knob, and many other peaks are accessed from Copper Basin. The different canyons are creeks are all signed and there are a few unimproved campgrounds as well as two better campgrounds at Starhope, and Muldoon Canyon. 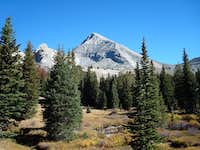 Hyndman Peak from Lower Hyndman Basin
This road provides the best access to the central Pioneers. Hyndman, Old Hyndman, Cobb, Goat, Handwerk, Salzburger Spitzl, Big Basin, and many other well known peaks are accessed this way.
Hyndman Creek is accessed by turning east onto the East Fork Wood River Road about 4 miles South of Ketchum. A few miles into the drive the road splits. Turn left onto FS-203 and head North til you arrive at a parking area where the trailhead is.

There are many wonderful places to camp in the Pioneers. The Sawtooth and Salmon-Challis National Forests both maintain excellent camping facilities in very scenic locations. Here is a list of those campgrounds. 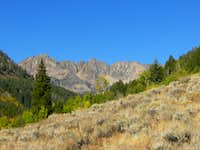 View near Iron Bog Campground.
This Campground offers great access to the Southern Pioneers, particularly the Smiley Lobe. Be aware that this Campground isn't too shady but has some great views.


This is a nice place next to a pond with a lot of trees and close to Kane Lake.


This is a forested campground near the Sun Valley Area.


If you like wide open spaces with great views this is the place for you. This campground is at 8,000 ft. in Copper Basin near some of the highest peaks in the Pioneers.


This Campground has got to be one of the most beautiful campgrounds in Idaho. It sits in a glacial valley with awesome views of the north faces of Old Hyndman and Hyndman Peaks. This is a "must see" destination. 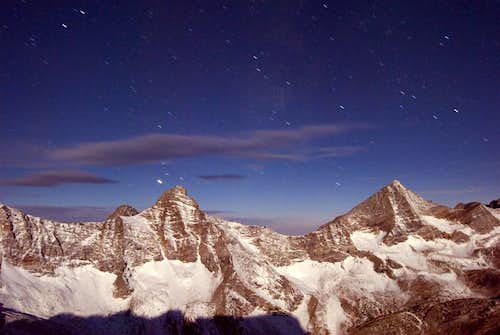 
I don't know much about this campground but the web page says it offers access to the Pioneer Cabin Trail.

Tom Lopez's Idaho: A Climbing Guide is the authority on climbing the peaks of the Pioneers. Don't go there without consulting this book first.
For multiple trip reports on Pioneer climbs and extra information go to Idahosummits.
For info on current conditions as well as trip and partner info go to the Idaho Outdoors Forum. 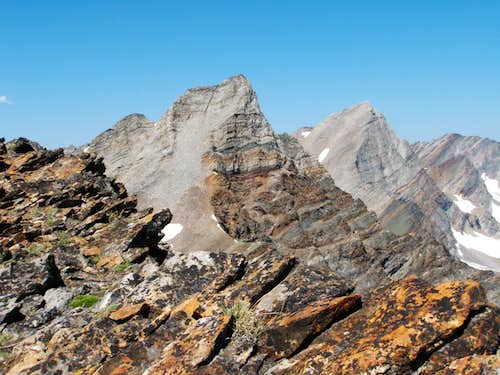