Big Basin Peak is located in the Pioneer Mountains of central Idaho. 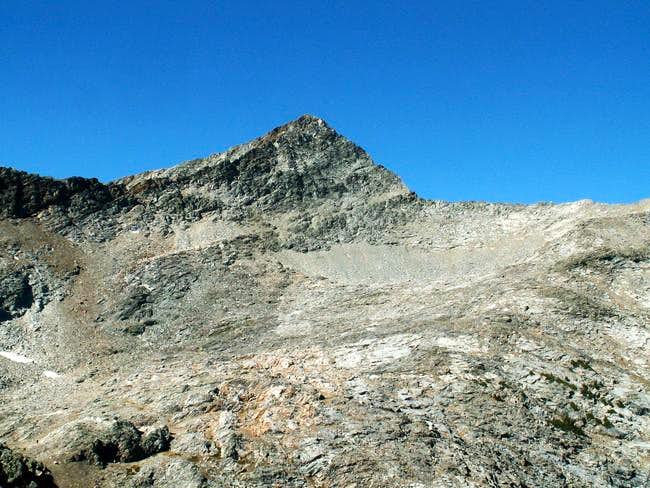 Big Basin Peak, although high an elevation, is an elusive mountain. It cannot be easily seen from any direction except from the remote and rugged Wildhorse Canyon. Although it sits directly along the main along with the most impressive and tallest Pioneer Mountain Peaks, The Box, McIntyre, and Cobb Peaks block all clear views from most popular hiking and climbing areas in the Ketchum and Sun Valley region.

Big Basin Peak sits at the head of three major drainages. Its sheer north face, which is unnclimbed and nearly vertical for 1,000', towers over the headwaters of Wildhorse Creek, an enormous glacially carved valley in the heart of the range. When viewed from the headwaters of the East Fork Big Wood River, its south and east ridges meet above the Big Basin's rugged southeast face to form a perfect pyramid. Big Basin Peak also stands high above the impressive Big Basin but only is the climber rewarded with its beauty if one explores the remote upper reaches of said basin.

As of late August 2005, a small register in a water bottle had been left at the summit with nothing in it but a pen and a business card. My climbing party left a topo map and signed the blank side. It has been left by two ambitious, local climbers and most likely had been the only other ascents that year. Based on the 25-30 rocks on the cairn on the summit, it seems that only 1-2 climbing parties reach this remote peak every year. The easiest route is a long class II route that takes most of a day.

Follow the road through the old mining town of Triumph until the road becomes dirt. Continue up the main East Fork of the Big Wood River as the road splits at Hyndman Creek. Follow the road past Sawmill and Federal Gulch Campgrounds. The road deteriorates in condtion after the campgrounds and a four-wheel drive, high clearence vehicle is needed. Drive 4 rough miles to the trailhead for Johnstone Pass.

East Fork Road is closed during winter and spring near the Sawmill Gulch Campground.

There are many mountain goats in this region, please pay respect and keep away.

The mountain is usually climbed during normal summer months. However, because a class II route leads to the summitm (which is rare in these parts), once the avalanche danger passes and roads open, Big Basin Peak may be climbed earlier than other Pioneer Peaks.

A winter ascent would be long and arduous, not to mention dangerous as avalanches in this area exceed epic proportions in winter.

Many campgrounds are nearby Big Basin Peak, including Wildhorse, Sawmill, and Federal Gulch. All offer adequate facilities.

Camping is also possible at all trailheads leading to Big Basin Peak.

There are also endless options for tent camping in Big Basin, East Fork, and Wildhorse Canyon.

Big Basin Peak is very remote and not located near any major reporting stations nor are there any live web-cams in the area. The following links are the only year-round information available for the region.