McIntyre Peak is located in the Pioneer Mountains of central Idaho. 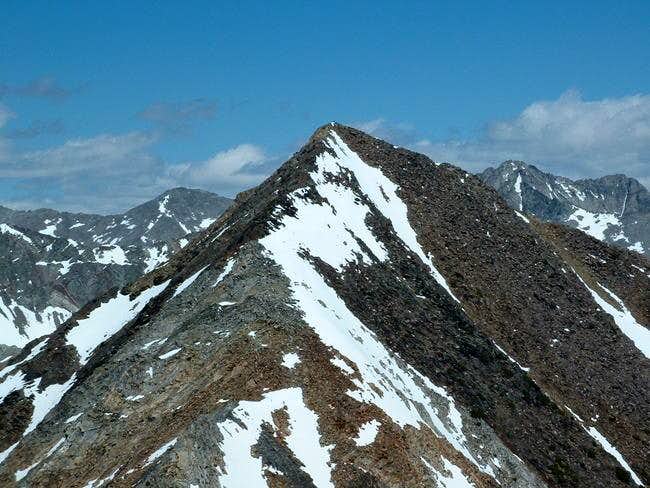 McIntyre Peak is another of the impressive Pioneer Mountains located along a high divide, which divides the East Fork of the Big Wood River and the Big Basin. McIntyre Peak, triangular in shape, is quite steep on all side and is made up of a mix of loose talus and solid granite.

McIntyre Peak is named for W.A. McIntyre who was one of the first to climb this beautiful pile of rock in the 1950s. A few years later he climbed the mountain's twin summit and named it for his wife, Jacqueline Peak.

This mountain sees very little, if any traffic, because of its close proximity to much a much higher desirable destination, the Pioneer Triumvite, or Cobb Peak, Old Hyndman, and Hyndman Peaks.

The most commonly utilzed route to the summit of McIntyre Peak is short, but strenuous and follows difficult class 3 to easy class 4 terrain.


Getting There and Standard Route

Access to this peak requires incredible four wheel drive abilities along with a car to do it. Turn onto the East Fork road 4 miles south of Ketchum. Drive through the subdivisions and past the old mining town of Triumph. Here the road turns to dirt and forks shortly thereafter. Keep right and follow this progressively deteriorating road to it's end. Once you have reached the end, the trailhead for Johnstone Pass is here. After a few hundred yards, McIntyre Peak as well as a beautiful valley come into view. Continue on this trail until you reach the 8,300' contour line or where a rubble filled draw opens up to your west. Scramble to the top of the draw, I suggest going up the portion closest to McIntyre for the best footing. From here, it is suggested by some to scramble northeast at this point, up the southwestern slopes of McIntyre to the southeast ridge. I attempted this route only to be met by class 4 and 5 cliff bands, route finding problems, and very slick rock. However, in my day of bouncing all around this mountain, I found a very straight forward and pleasent route up McIntyre. Once at the top of the draw, continue up the valley between Jacqueline Peak and McIntyre Peak until you reach the base of McIntyre at about 10,100'. At this point, two distinct, pinkish colored gullys head parallel to each other, climbing the south face. The gully to the left leads almost directly to the summit while the gully on the right leaves you just a few hundred down the southeast ridge. These gully have quite nice footing and arent terribly steep, though accessing them is a different story. To enter either of the gullys, the first 40 feet are on slick, granite cliff bands which require incredible scrambling skills or minimal use of ropes. Try looking up the small ravines for best footing. Once above the cliffs, its just a short scramble to the top!

No permits or fees required for this area. Please keep your distance from any mountain goats you encounter, not only for their safety but as well as your own.

Once again, little has been recorded about this mountain and very little is known about it but a winter climb would be very difficult with a long approach and high avalanche risk, none have been recorded.

Plenty of camping room is around the area. On the way out two popular campgrounds exist, Federal Gulch and Sawmill are about 4 miles from the trailhead. There is also plenty of room to pitch a tent where the road terminates as well as along the trail itself.

You can always look at the local weather in the Ketchum/Hailey area for a general idea of what conditions will be like, but localized, unpredicted thunderstorms and snowstorms frequent the area due to the rugged nature of the area. The Pioneers as well as surrounding mountain ranges are classified as climate H (highlands) on the Kopen (KUR-pen) classification system meaning that weather conditions are highly erratic.


Pictures From The Summit

Views of the area from the summit. 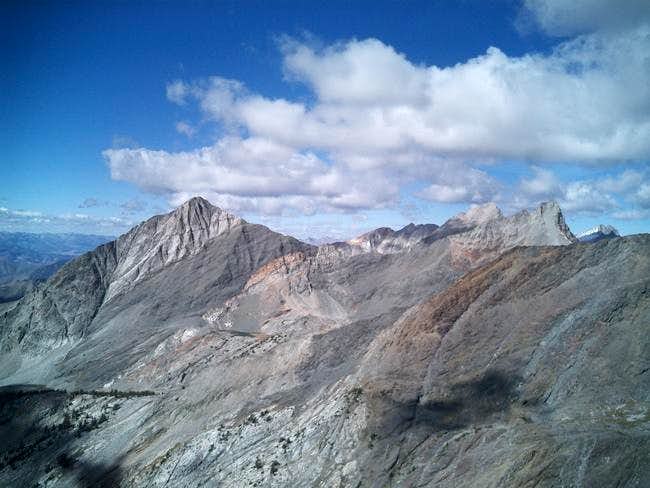 W.A. McIntyre who was one of the first to climb this beautiful pile of rock in the 1950s. A few years later he climbed the mountain's twin summit and named it for his wife, Jacqueline Peak.