Grays Peak is located along a divide near the heart of the Pioneer Mountains of central Idaho. 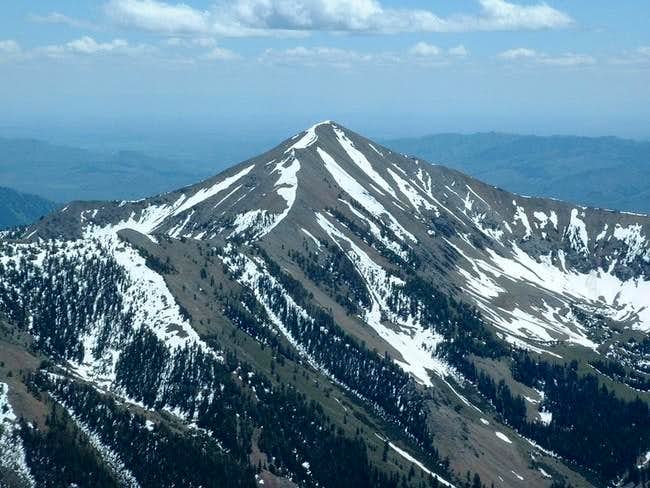 Grays Peak is a large hulking summit that stands out from the main crest of the Pioneer Mountains like a soar thumb. Although not as high nor rugged as its Pioneer counterparts, Grays Peak is still an attractive cone-shaped peak that is especially beautiful in winter.

Grays Peak, again like many Pioneer Mountain Peaks, is elusive and not easily seen from anywhere except the rarely visited Little Wood River Valley or the small town of Triumph.

With the exception of its scraggy west face, Grays Peaks is surrounded by high, wind-blown, ridges and meadows. Its isolation and exposure are so great that it is often blown free of snow during the harsh winters that Idaho endures.

Because of its prominence, proximity to a trail, and the fact it is officially named, (few peaks in this region area), lead to a moderate amount of traffic traveling on the slopes of Grays Peak year-round. All ridges leading to the summit require sustained class II for quite a ways, which is certainly justified by the outstanding summit views.

To access Grays Peak from Ketchum, drive south on Idaho 75 for 4 miles and turn east at the East Fork stoplight. Continue on this road through the quaint town of Triumph where here, you will finally feast your eyes on Grays peak to the east. Past Triumph the road turns to dirt and splits, stay right and continue to the Federal Gulch CG. Turn right into the CG and park here. From this point, two options are possible (both equal in distance, 3.5 miles one way.) You may either bushwack your way up the west ridge right from the start, or take the standard route and follow Federal Gulch Trail. The trail will reach a pass in about 3 miles. From the pass, head north up an open slope to point 9,785. Here you will join up with the west ridge. Head due east up the class two ridge to gain the summit. At the summit, a not often seen view of the remote Little Wood River Valley, as well as the northern Pioneers, awaits you.

This mountain may be climbed any part of the year. As for how far the East Fork Road is plowed in winter is a question to me. I will find out ASAP but it should be plowed at least to within 2 miles of Federal Gulch CG.

Abundant camping is available at Federal Gulch CG right at the base of the mountain.

the trail going up federal gulch is over grown with weeds and flowers and unfortunatly stinging nettle, we found out the hard way while going to the summit with shorts on.