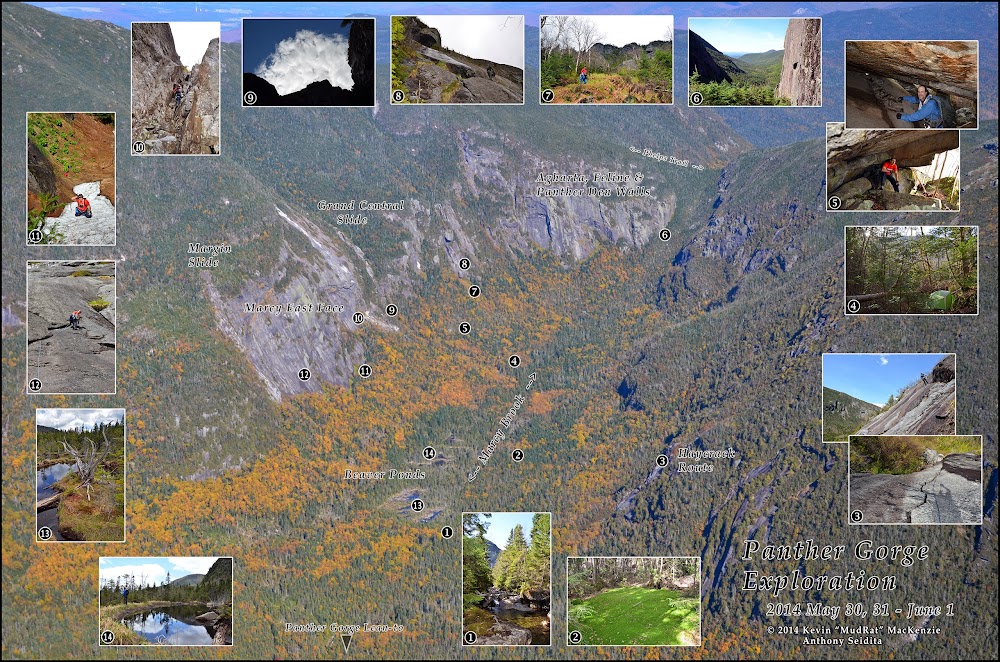 "Map" of Panther Gorge with insets of some areas we visited during the three days of our exploration. Aerial taken autumn of 2013. CLICK HERE FOR THE MONSTER SIZED JPG.

Introduction:
Anthony Seidita (Deep Forest) and I created a trip with the intent to explore as much of the Panther Gorge as possible in three days. The focus was to be on climbing, but the weather sometimes has the final say on that. We began at the Garden Trailhead at 5:30 p.m. and trekked 7.5 miles to Slant Rock lean-to, arriving about 3.5 hours after starting—that took care of Thursday night. We awoke Friday to nice weather (with storms forecast for later in the day), ascended 1 mile to the Haystack/Marcy col and bushwhacked ¾ mile into the north end of the gorge. It’s always fun balancing on blowdown and jumping holes in talus with 65 pound packs, but that’s what we signed up for. In all the descent took 1.5 hours, typical based on my other trips into the gorge.

By 9:30 a.m. our camp in the north end (just below the legal elevation limit for ‘at large’ campsites) and near the drainage of Grand Central Slide was set up—a clean flat area located between a large boulder and blowdown on two sides. The first two days found us exploring more of Marcy’s East Face, the northwest talus field and its small caves**, portions of the northwest cliffs, myriad beaver ponds, Marcy Brook and its adjacent forests. Things appeared much the same as when we climbed the East Face year. **Stacked talus (60x90 feet in dimension was the largest we found this time) lines most of the floor below the cliffs including the East Face.

Our third full day was the most adventurous in terms of climbing. The weather had been cool and wet (including a thunderstorm which dropped ¼ inch hail Friday evening) during the prior days, but blue sky reigned and the area partially dried out on June 1st.

Our camp placed us about 30 minutes’ bushwhack from a series of slides that decorate Haystack’s western flank near the southern end of the gorge; the two closest to the beaver ponds were steep and caught our interest during our walk through the area the day before. I studied them from afar in 2009, but assumed they were too steep—wise given my experience at the time. The slides share a common release point beginning with an alder filled strip of rubble at almost 4,000 feet in elevation with small tiers of ledges just below; the tracks split just above a dominant ledge above the wider bodies of anorthosite.

Their debris fields lie at 3,550 in elevation. Thus, they’re short yet worthy climbs at around 500-600 ground feet in length. Each contains some low fifth-class pitches in addition to scrambling so they’re serious climbs as slides go. Both tracks have unique features from each other so, taken as a pair, they offer a full day of diverse climbing.

The icing on the cake lies in their spectacular location—deep in one of the most remote areas of the High Peaks with a view as awe-inspiring as it comes. You’re eye level with Marcy’s East Face and high above the numerous beaver ponds in the gorge. To the north on Marcy lie the shadowy lines of the technical climbing routes on the Agharta, Feline and Panther Den walls. See Adirondack Rock for more detail on these challenging routes. 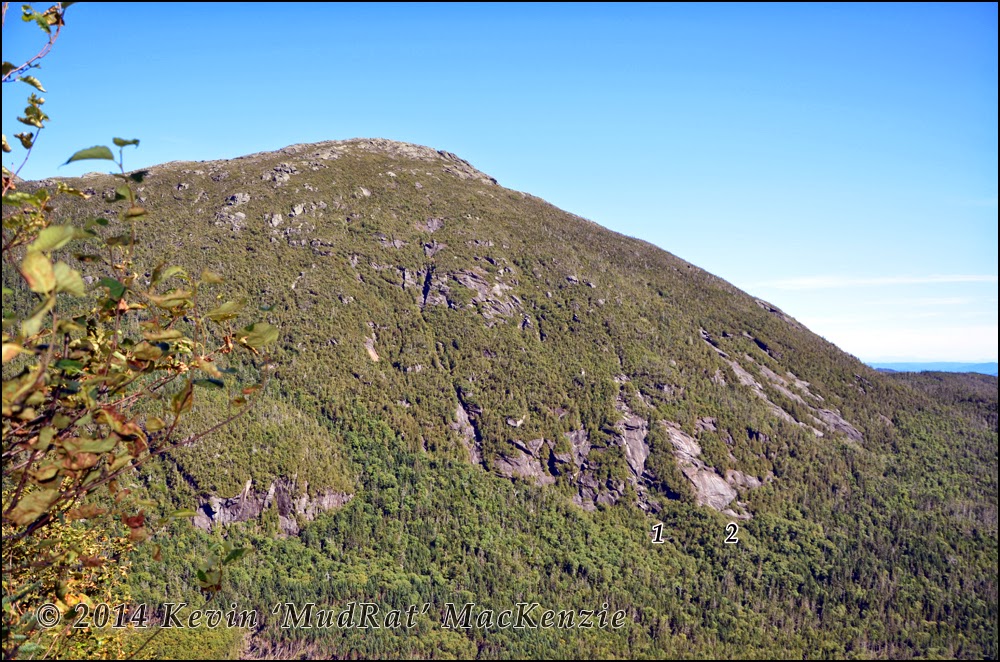 Slides as viewed from Marcy. 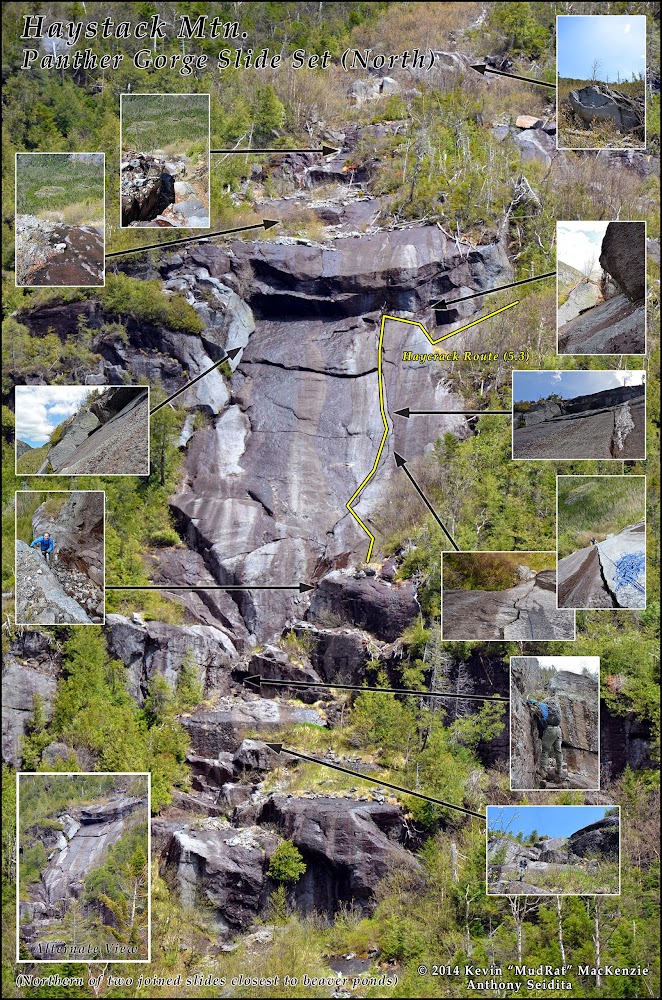 A small (2 foot wide) brook on the east side of Marcy Brook near the southernmost beaver pond marked the beginning of our bushwhack. The drainage seemed to lead to the slides at first, but led just north of them in reality. Thus, we took a heading of 90 degrees true and bushwhacked for about 300 ground feet to their base. Tight bendable balsam trees made for a scratchy 10-minute bushwhack before we stepped into groves of alder in full pollination—can you say, “allergy attack!” Spring was really just beginning in the gorge, leaves were just beyond the budding stage and insects were just emerging (like a moth near our camp that crawled out from behind a root to dry its new wings).

Above the rubbly debris field, was a unique series of large staggered ledges. The first was about 20’ tall with a large scoop carved out of its face. We avoided this on the left. Thereafter, we climbed another 6 or 7 terraces via chutes, friction based scrambles or grassy ramps with a few exposed moves.

Anthony noted that the final 10-foot scramble up blocky steps was reminiscent of the trap dike, though on a much smaller scale. This capped the first segment of the slide (about 80 or so vertical feet) and led a flat terrace below the technical portion…a magnificent face split by a hand crack from its base to a slightly overhanging wall about 10 feet high. A grassy ramp led up the right side…good for a descent or just to scramble around the face.

Our intent was to “put up” a route via the crack to the overhang. Thus we brought a 60m rope, cams and nuts. As Anthony put it, we had enough to climb Half Dome…ah well, better safe than sorry. (Don--if you’re reading this, your words regarding rack size echoed in my mind during the entire climb…). 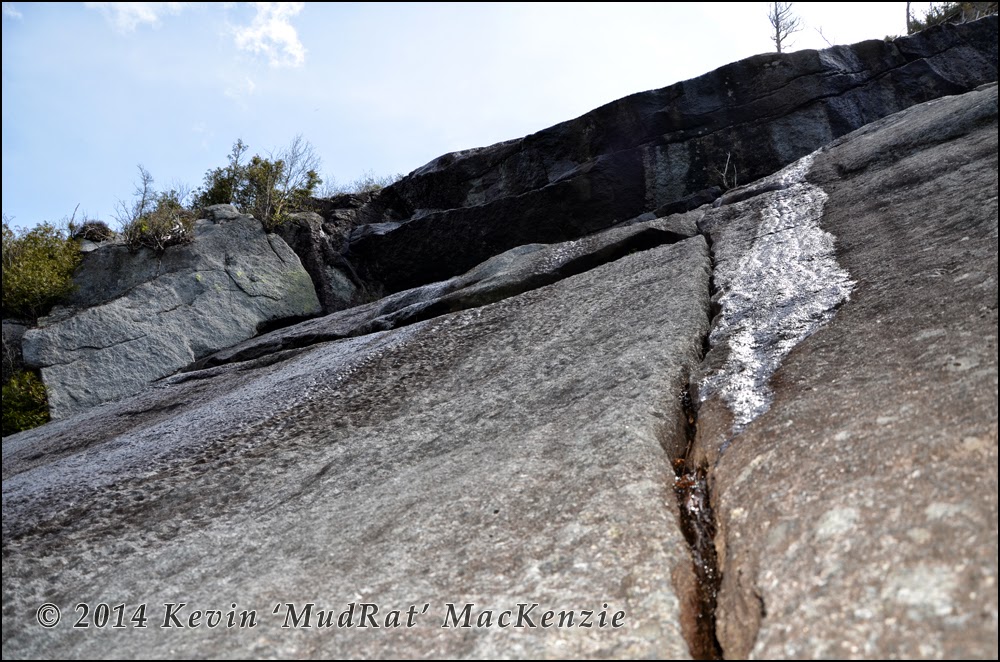 Top of the Haycrack route.

My initial thought was to follow the crack 80 feet to a large overlap, traverse across to a large corner ten friction up to a crevasse about 20 feet above that…a perfect exit and anchor point. Portions of the slide were soaked, red algae glistening in the sun, so we opted for a slight variation.

I friction climbed from the terrace to a right leaning overlap and followed it up about 10 feet to the hand-crack. The rock quality was excellent with lots of divots from weathering (similar to most of Colden’s slides). Once in the crack, I felt completely safe with unlimited options for hand and foot jams. Sharp andesine feldspar crystals gave the adjacent face ample traction as well. It was a wonderful climb along a slightly serpentine line that crested a bulge in the face after about 60 feet. The slope decreased near a 1-foot overlap about 80 ground feet from the bottom up.

Though it could be climbed in one pitch (total length was around 150 feet), I set up an anchor at the overlap and belayed Anthony for practice. He then led the remainder of the route by following the crack up to the wall and traversing right on lower angle albeit wet slab. A final climb down a 6-wall and across easy slab led to the woods. We later named the route “Haycrack” and rated it 5.3.

A short bushwhack up led to the top of the low angle slab of the adjacent slide. A one-minute bushwhack across a narrow band of balsams led to the top of the rubble strewn slab of northern Haycrack track. The slide could not be seen below the overhang which gave me a nice place to flake the rope and remove some of the twists. Above were a variety of ledges, small stepped chutes and the top of the slide. 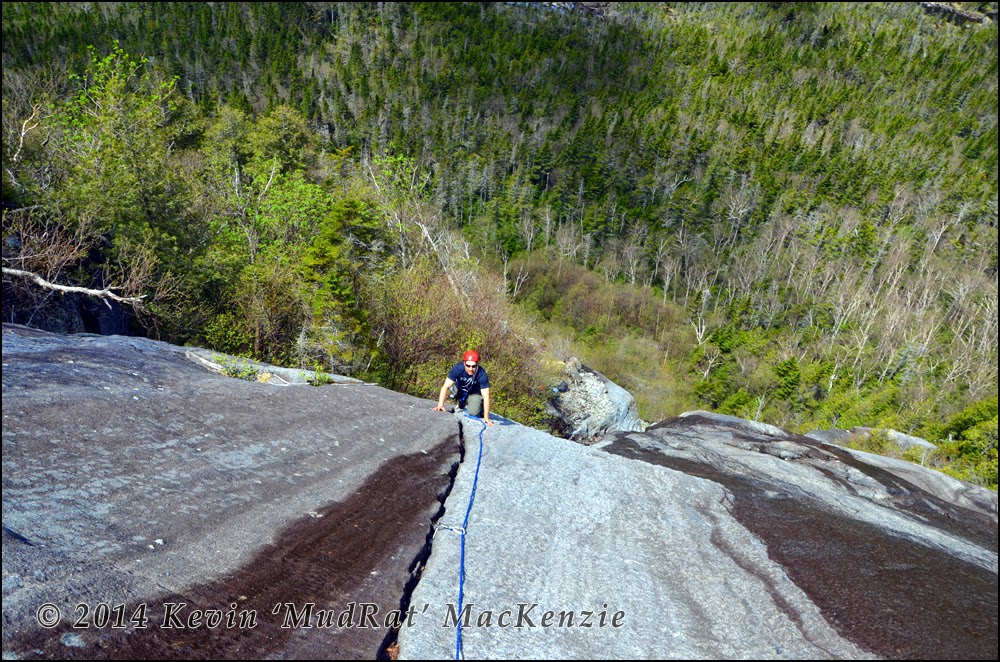 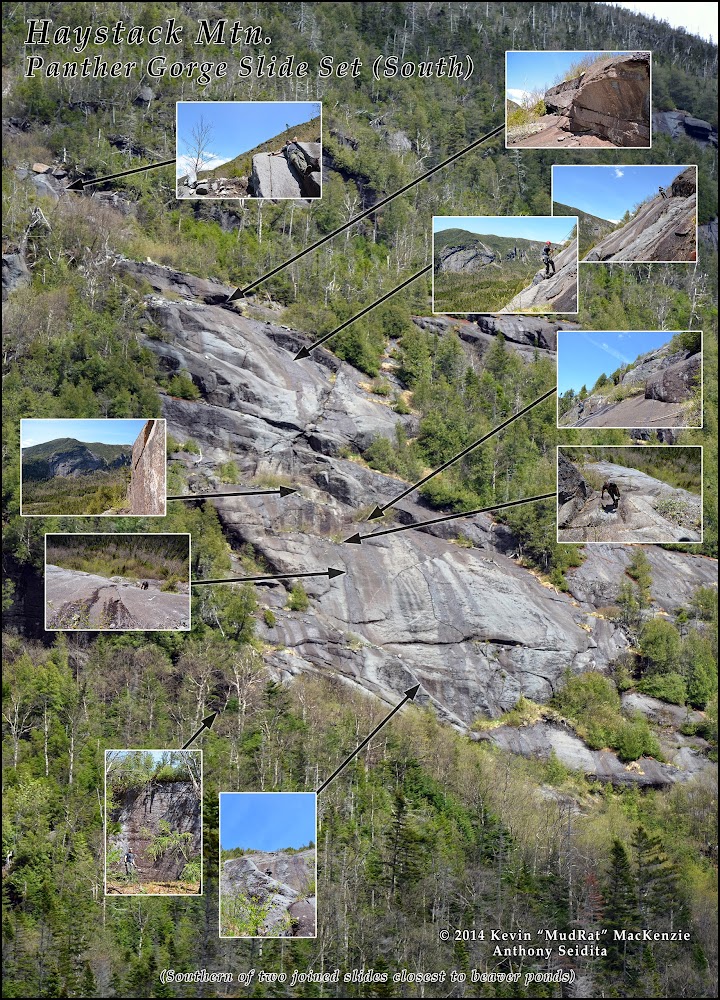 We explored the adjacent track in a rather odd way. First, we rappelled down the top half before crossing through the trees to collect our packs near the start of the route initial route. We then walked along a 30 foot wall to the base of the southern slide and soloed up to our exit after the two rappels. I’ll describe it as a bottom up climb for clarity.

A couple items of note that happened during the rappel include hearing Anthony’s imperative tone as he screamed, “Roooocccck!” (I’d led the first rappel and was out of sight). What could have been catastrophic, was far from that in reality. Safely off to the side preparing for the second rappel, I watched the 50+ pound rock zip by and crash into the alder below. I screamed back not to worry, I was fine. We also flushed a dark-eyed junco from her nest. Four small mottled eggs were protected in a pocket of spiraled grass…the distraught bird was more than happy when we left! 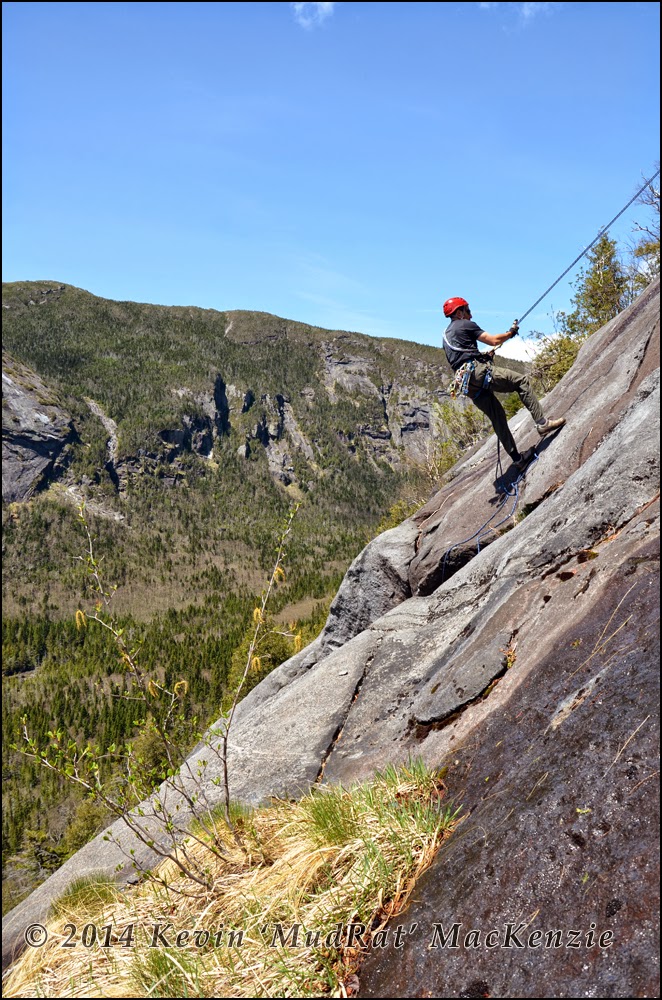 Rappelling down the top of the slide. 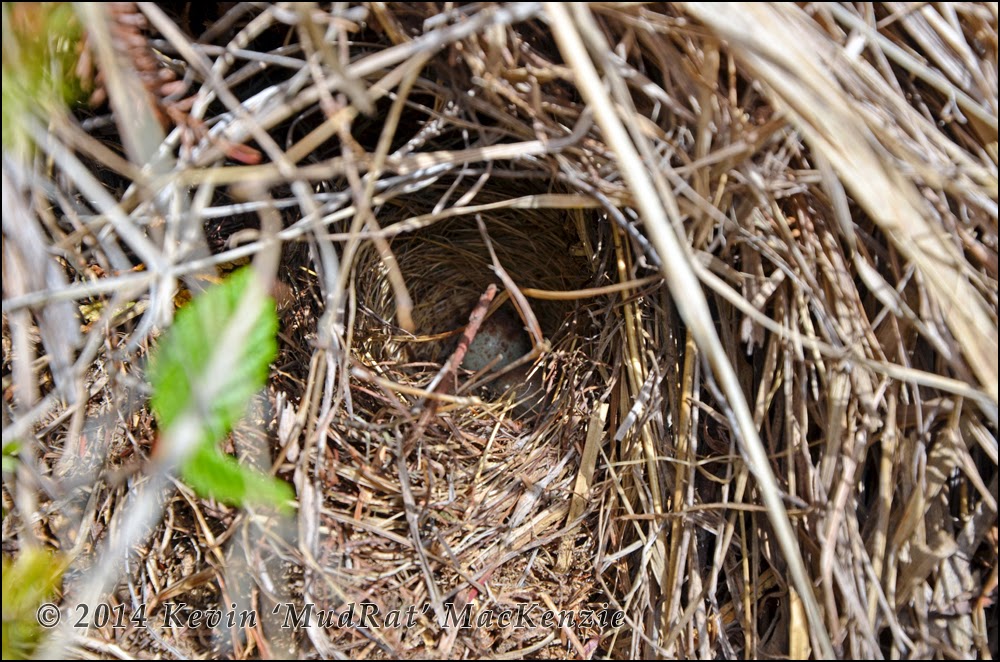 Dark-eyed junco eggs along the edge of the slide.

From bottom up: The southern slide track begins with a couple small terraces before a rather dramatic lower face. On the right lies a hand-crack, to the left sits a left-leaning ramp/corner. The dihedral had a finger crack which made it a fun climb up to a short section of friction slab. The steep initial pitches make the remaining portions feel quite exposed. 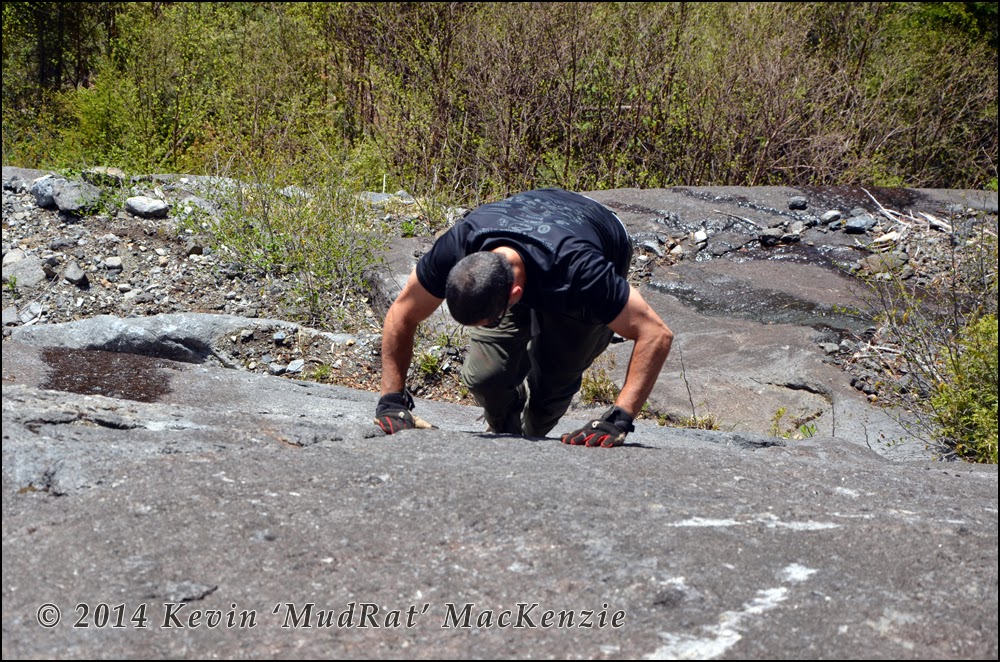 Anthony soloing a finger-crack on the second pitch of the southern track.

A finger crack (probably very low fifth class) then led about 50 feet up to a markedly different area of the slide. Blocky terraces, each with abundant features—cracks, ramps, small ledges and rough anorthosite—led to the most exposed portion a few hundred feet up. Here the slide transitioned into more of a face/friction climb on a 45+ degree slope. While rappelling this area, I found lines of differential weathering that serve much the same as a crack in the face…bomber holds for feet and hands…at least in some areas. Capping these pitches was a small wall. Thereafter, smaller terraces and overgrown rubble led to the confluence with the northern track.

Exit
We followed the drainage down from the southern track back to Marcy Brook; it was 4:00 p.m. when we found the gurgling watercourse. The location was ideal with a small pool below a cascade setting the foreground and Marcy’s East Face far beyond. The sun was out and there were no blackflies so we lazed about the area for nearly an hour before beginning the easy bushwhack back to camp. The following day was to be our exit from the gorge, but after some discussion we decided to pack up and make a late day escape to Slant Rock lean-to at around 6:45 p.m.

Bushwhacking out of the gorge with full packs is nearly indescribable and not something I want to repeat on a weekly basis. For those who haven’t been down the north end, it is a minefield of talus; many room sized and some house-sized. Smaller boulders the size of cars and refrigerators are haphazardly stacked and overgrown with moss and rotten trees. Man-eating holes are the norm as are intermittent areas of dense blowdown from wind events and rock/ice falls. After 450 feet of elevation gain (about 3,950 feet in elevation) and considerable effort from the navigational acrobatics and crawling, we reached the grassy ramp along the Panther Den (near the top) and fell to the ground for a brief break. The ramp led to another thick bushwhack on a lesser slope with smaller talus.

Eventually, we crested the col and found the Phelps Trail at 7:45 p.m. I was dumbfounded to see that we’d muscled our way out in a mere hour’s time. My average to descend is 1:30 – 1:45 hours, but our desire to exit before dark apparently drover our intent. A mile later found us at Slant Rock lean-to cooking dinner to the sound of thrushes and warblers singing their last songs. The night roared with strong wind gusts assailing Point Balk and Basin. Our exit to the Garden in the morning took another 3 hours under a blue sky, a perfect ending to another Panther Gorge adventure.

…stay tuned for reports about the talus, northwestern cliff base, East Face and beaver ponds. 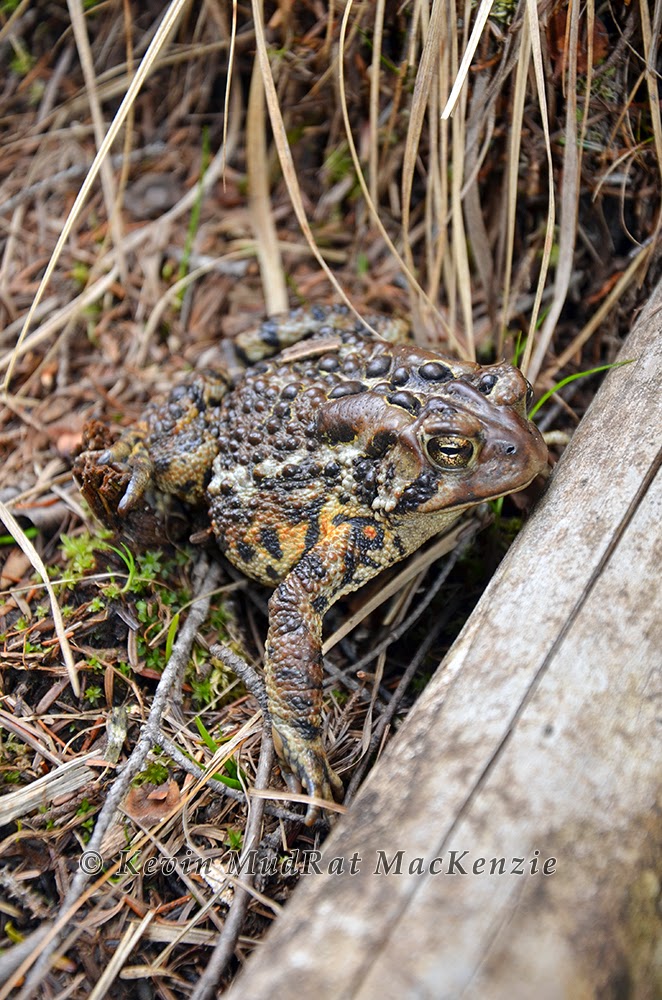