New blood surged into Panther Gorge during the summers of 2003/2004 when rock climber Bill Schneider partnered with several others including Adam Crofoot (MaxSuffering) to add new routes to the walls of Mt. Marcy. No rock (and only 1 ice) climbing routes had been added (put up) since the first in 1965.

I met Bill only recently, but we’ve put the time to good use with three trips into the gorge since June. Our first was on June 11 when we tried to hunt down a line in an unnamed area, now called the Huge Scoop. By the morning’s end we found ourselves 200 foot up a technical slab in a huge corner with stacked roofs of anorthosite overhead. Every line up the adjacent walls or corner was wet—“drip, drip, drip” droned the disheartening sound of the background music. We rappelled back down and put up a smaller line to the north called Cat on a Wet Tin Roof.

We took another trip some weeks later with the same dramatic line in our crosshairs. We again walked away with our tails tucked. Again the walls were too wet. The proposed route became a grudge match between us and Mt. Marcy. The mountain will always win given inclement conditions, but we’re tenacious/stupid enough to continue until we either succeed or (figuratively) die from it, one.

Good things come to those who wait is an overused phrase though sometimes true. August 30th was preceded by a clear weather window. We aimed to finish the project with Adam Crofoot in the mix to make it a trio.

I prayed the route would be a success, but what a day we had. It’s going to be hard to do this route justice within the confines of a trip report; it’s really that good. As Adam commented, “It would be a classic if was road-side.”

Below, the Huge Scoop from the base. 3rd photo, pitch 2 of 4 pitches or the crux of the route. 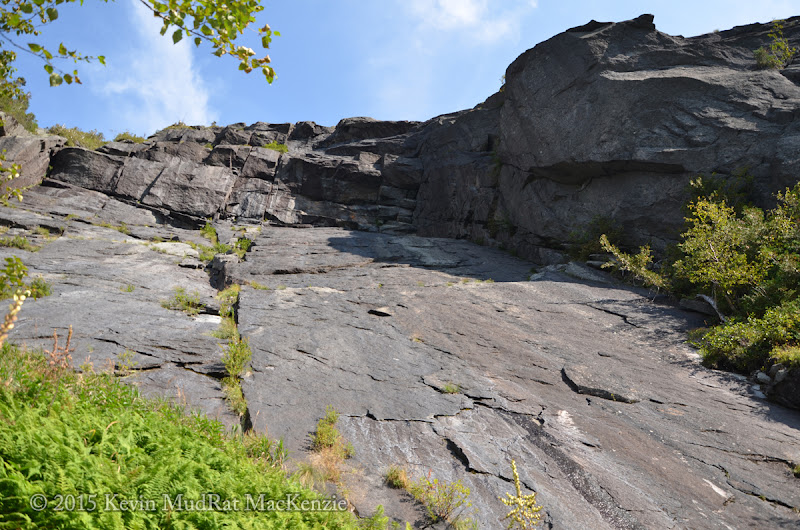 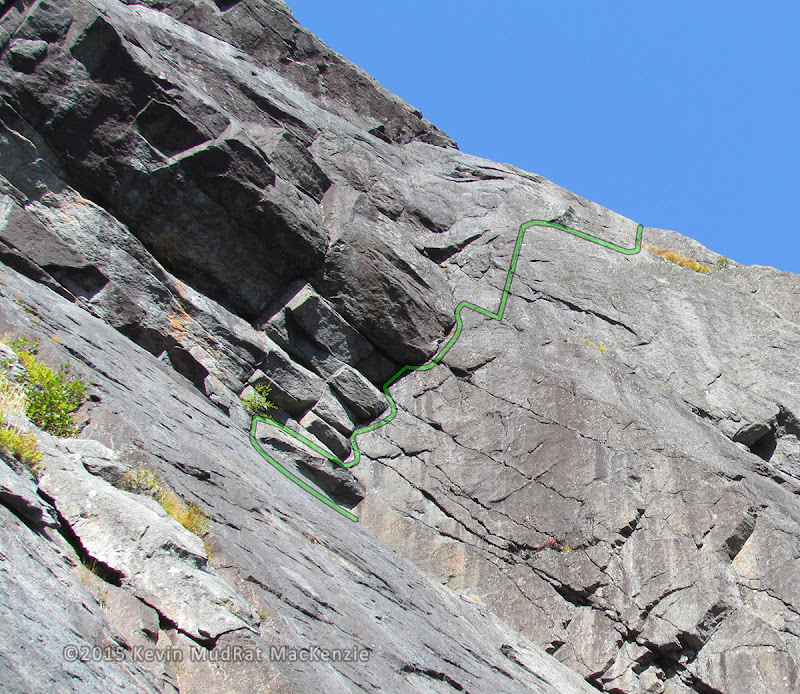 The usual Panther Gorge day-hiking logistics applied: meet before 5 a.m., embark from the Garden and arrive at the Marcy/Haystack col around 8:45 a.m. Add another 45 minutes (with the approach dialed in) to get to the Huge Scoop. I never thought I’d say this, but the approach has become second nature (a very very subjective comment that's taken many years to build up to). I’m usually half-asleep for the first 5 miles at that hour in any case. Our normal routine finds us taking a brief break just after Hogback Brook, a few minutes’ break at Slant Rock, a quick water refill near the Haystack junction and then stopping to don climbing gear at the base of our hopeful quarry. 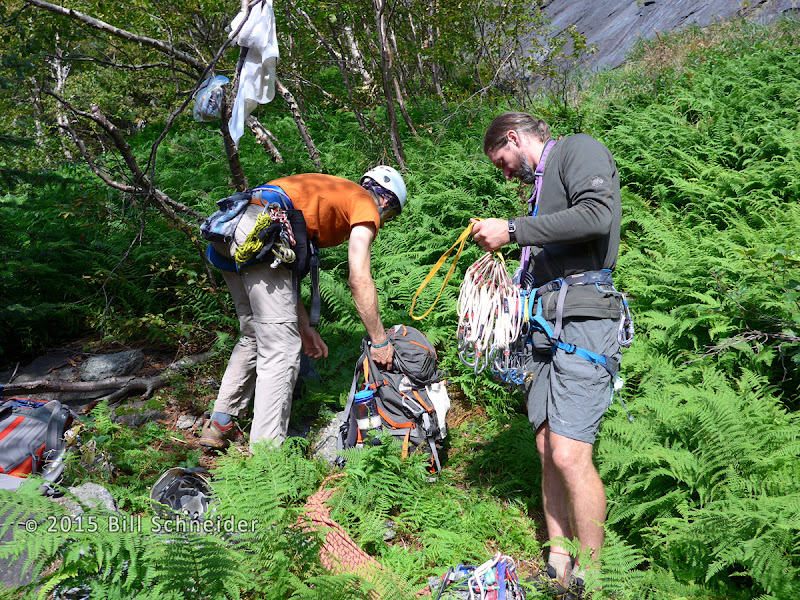 We arrived at the scoop at 9:30 a.m. I breathed a sigh of relief when I saw that the upper corner was dry. The central line, Rumours of War, and our hopeful route are prone to wetness even when adjacent rock is dry so a 3 or 4 day window of dry weather beforehand is critical. We made short work of unpacking, flaking the ropes, sorting gear, loading a climbing backpack and eating a snack. Adam was ascending the slab along the corner by 10 a.m. This gave us ample time to do what we came for.

While I was belaying, a small pebble zipped by with a whir, a reminder how fast even the smallest stone can travel. It wasn’t long before Adam had climbed the first pitch (5.7) and set up an anchor in the top right-hand corner of the scoop. We quickly followed and Bill set to studying the next pitch. It would follow a seam/crack up a multi-tiered roof system then traverse right to a splitter crack formed when a house sized piece of anorthosite shifted a few inches.

He moved left across the slab to a crack below a precariously cantilevered stone. It was perhaps 4 feet long with space between it and the cliff. It overhung the underlying slab and all common sense screamed, “Do not touch!” It soon became known as the Dong of Death, a name that spawned intermittent jokes for the following nine hours. After brushing past the tip of the Dong (see photo in photo set), Bill traversed back to the corner. Lichen made the preceding slab atop the first overlap difficult. 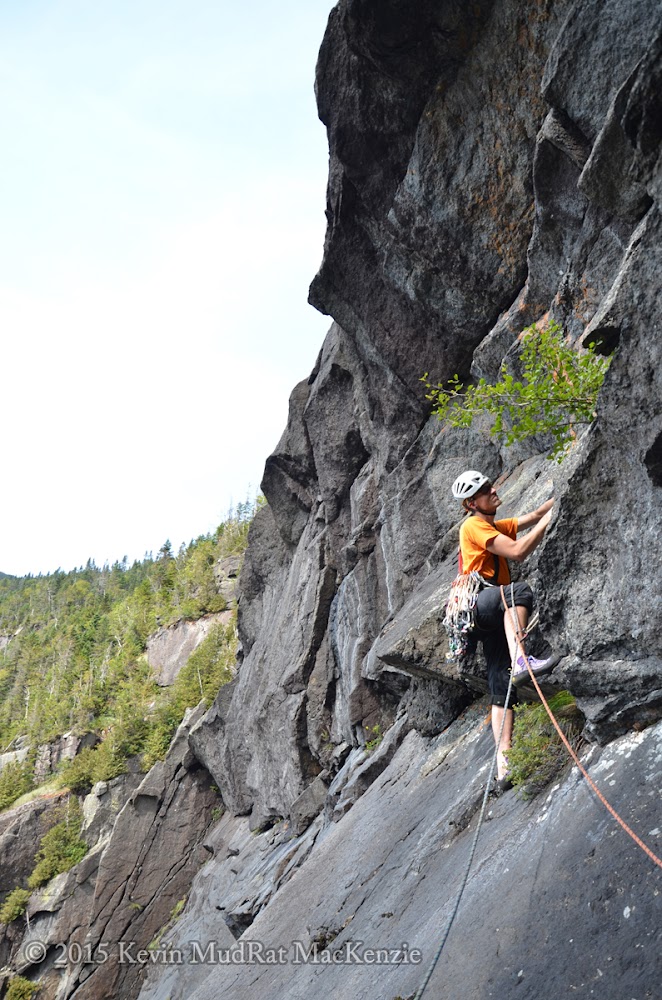 Bill ready to put up pitch 2 at the base of the cliff (top of the slab). Rumours of War crux is the dark line in background.
He made the pitch look easy as he buried gear deep in the crack of the corner working his way ever closer to then around the roof. I watched with a slight bit of apprehension as my fear of heights briefly escaped from its mental compartment. Adam and Bill were veterans of rock climbing and this type of line was different from most I’d climbed to date. He continued past the lip then traversed to the splitter crack. It swallowed his arm. Another 15 feet of climbing led to the top and he set up an anchor and belayed. The double ropes were artfully placed, each nearly parallel to the other. 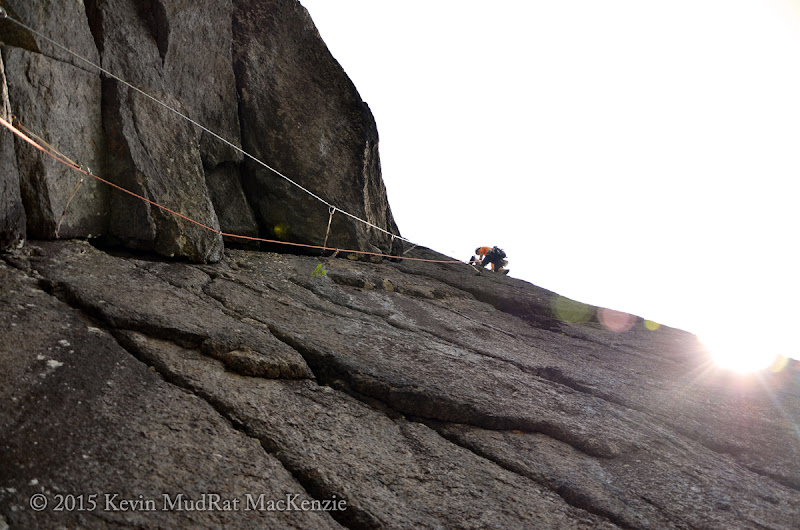 Bill in the splitter crack (invisible from below).
I climbed next.I too had to pass the Dong and brushed it with my shoulder. The cliff is made of 6 distinct tiers fractured both horizontally and vertically in some places (such as the Rumours of War route 50’ to the left). It truly looked like a portion of the cliff might collapse if the Dong was released. In reality, I’m sure nothing would shift.

Once at the corner, I realized the quality of the route was good. The cracks were deep and the horizontals on the vertical wall forming the corner made foot placement somewhat intuitive. Working up toward the roof I saw that Bill had buried cams deep in a wide crack that ate my arm up to my shoulder. I wouldn’t fall here. A few more moves placed me out from under the roof and higher along the corner secured by a finger lock. The crux was yet to come.

Traversing out toward the next crack meant leaving the security of the crack to which I was clinging—it was only about 7 feet to the next (I can reach 6 from finger tip to finger tip). Only small (crimpy) holds aided the traverse. I moved out and shoved my arm up to my wrist in the splitter crack...right as a foot slipped. I was belayed by Bill so I wasn’t going to fall, but my body swung slightly past the crack in which my arm was jammed. It was the closest I’ve come to breaking my arm, it’s an odd feeling when the radius and ulna flex. My arm went numb to the shoulder for a few seconds before the feeling returned.

I climbed the vertical crack; sharp crystals within scraped and dug, but the pain made me feel secure and aware. I heard Bill say, “Look up here,” and was met with a lens and shutter click. Usually I’m the one saying those words while others are perched in unnerving positions. The crack turned horizontal at the top and I clipped into the anchor. It was an incredible line, an incredible experience and the crux pitch of the second route in the Huge Scoop area.

Adam followed working the roof and crack like a master. It didn’t take him long to reach our position. I was free to hang over the side with the camera while Bill belayed—the perfect setup. We chatted about the gorge a bit while Adam climbed. Bill reached out and touched the face then looked back. “Nobody’s EVER touched this before, nobody.” My smile matched his. “That’s definitely part of the allure of the gorge, I said. There’s no feeling that quite matches it.”

It dawned on me that Panther Gorge has forged a unique brotherhood over time (with a sister in the pack). It’s only a handful of people that feel inclined to push themselves this hard for a route that may or may not be feasible. Nineteen miles, 5300 feet of vertical gain over 15-19 hours is a long way to haul double ropes, twenty pounds of metal and other climbing necessities without coming away with some sort of “prize”. Don’t get me wrong, any trip to the gorge is a good one, but exploring it can be done with a lighter load from the onset. 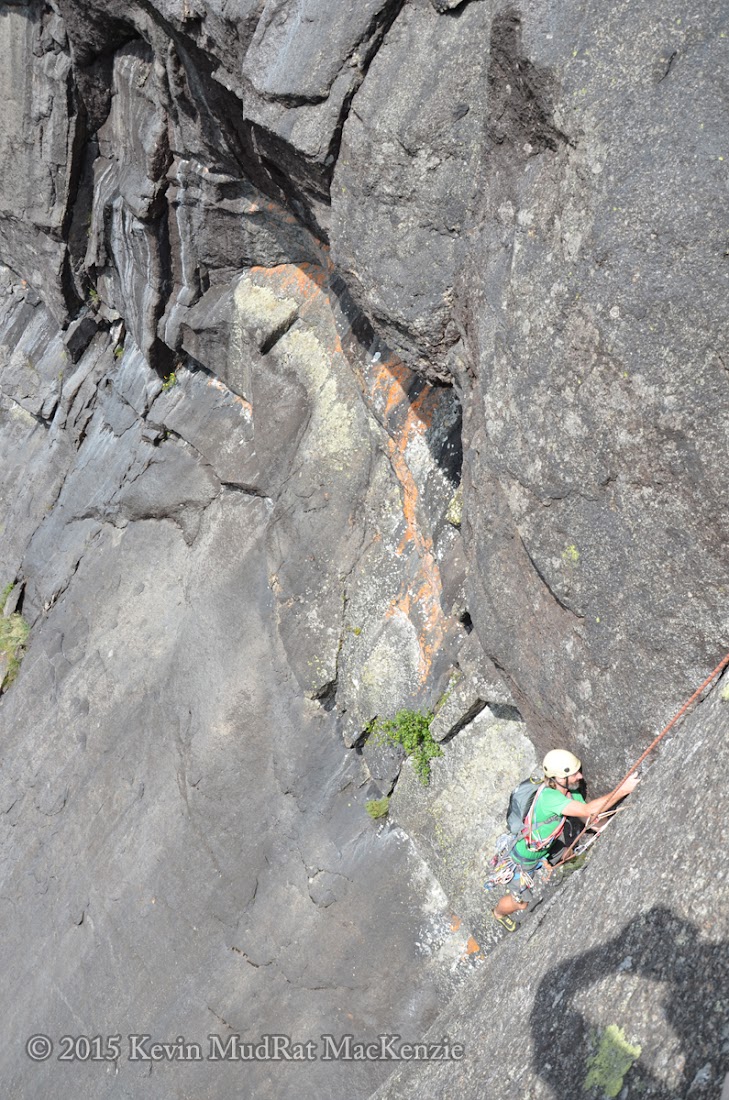 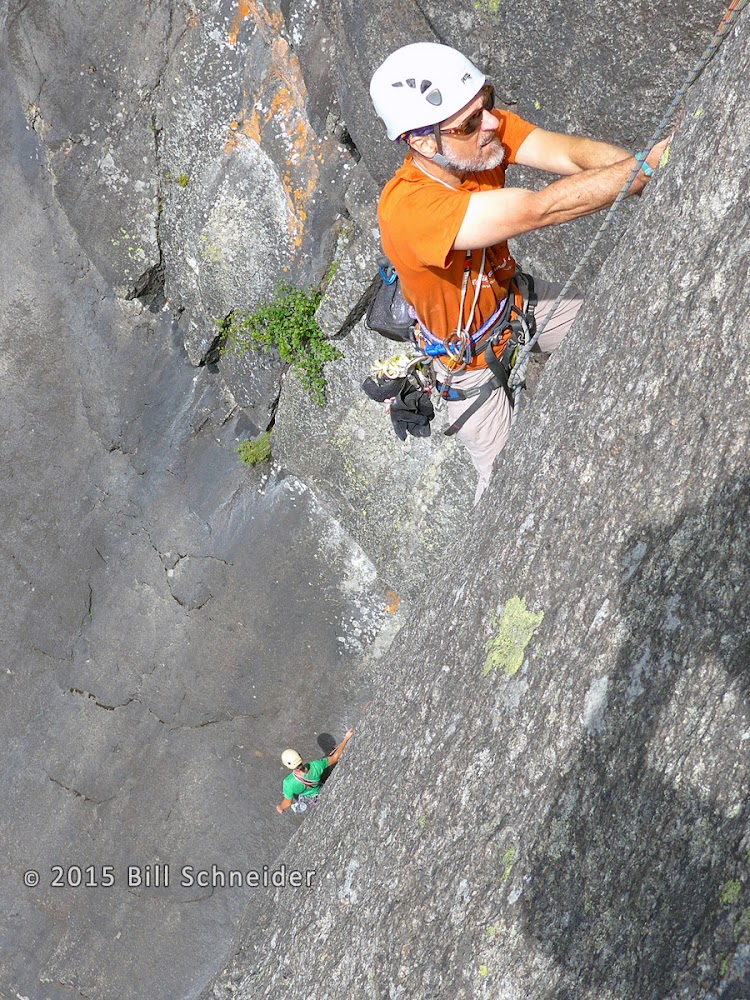 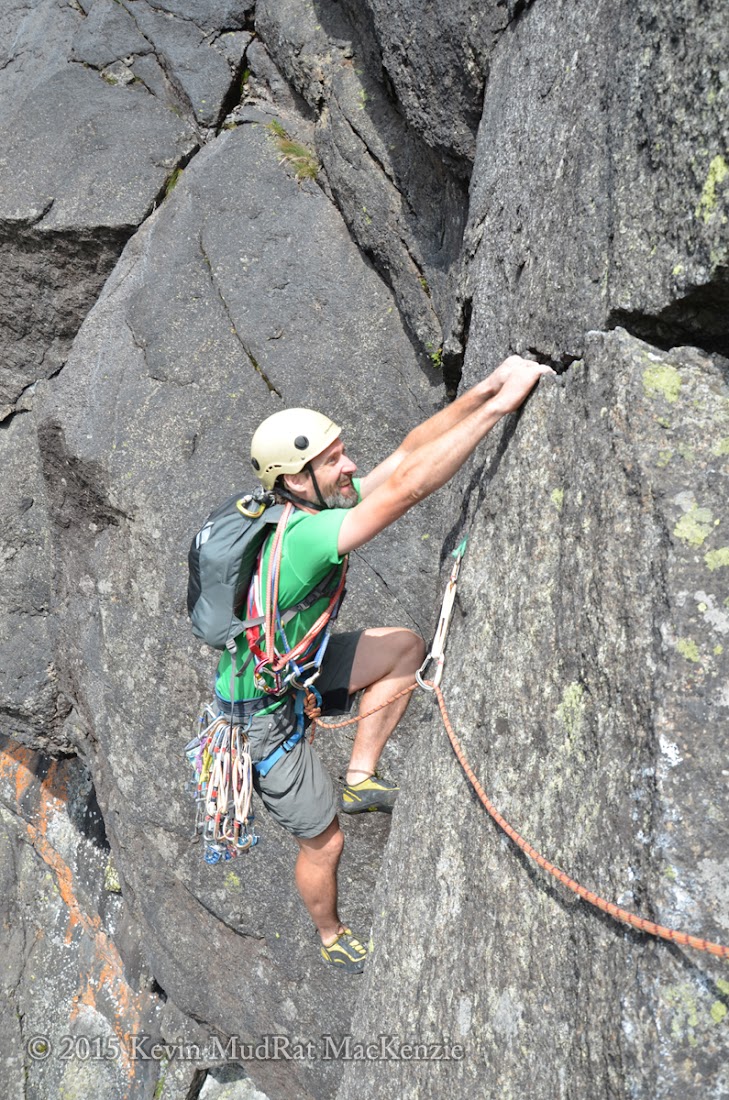 Various shots of Pitch 2.
Adam led the 3rd pitch, first traversing out to the left along a fingercrack. The protection ran out so he came back and put the route up a small corner to our right. This led up to the dimpled slab near the Wreck of the Lichen Fitzgerald route we put up in 2014. (Much of the area hosts “moonrock”, the differentially weathered anorthosite many are familiar with if they’ve taken the Colden Slide out of the Trap Dike). He kept the routes independent of one another by aiming for the right of two opposing corners. After about 120’ he climbed another short corner and belayed near a steep run of slab with...wait for it...more cracks.

We easily followed. Pitch 4 ran up the cracks in the wall and north to krummholz belay station atop the “Wreck” line. There was no rain, no threatening clouds, no bugs—it was a perfect day. We were smart enough to carry 2 liters of water up so we didn’t dehydrate. All that remained was the rappel. We followed to the same points as in 2014 and used the carabiners already in place (replacing the slings).

After 5.5 hours we were back at our packs basking in a moment that can only be defined as a feeling of pure fulfillment, friends on each side in an area so few have seen; an area so filled with beauty and peace. We discussed adding a shorter route on the way north, but we each had it in mind to exit before 9 p.m. Adam and I both had to work the next day and it was nearing 4:00 p.m. Another route would have to wait.

We reached the Phelps trail by around 5:00 p.m. and found our way back to the trailhead at 8:15 p.m., exactly 15 hours after starting. With the approach/exit and bushwhack dialed in, the route and sometimes weather are the primary wildcards at this point. Wetness and the exact line determines how long that may take or if it will even “go” at all. The longer moderate multi-pitch routes average between 4-6 hours each, but they are worth the effort. The memories will last a lifetime and, God willing, the routes will endure far longer. 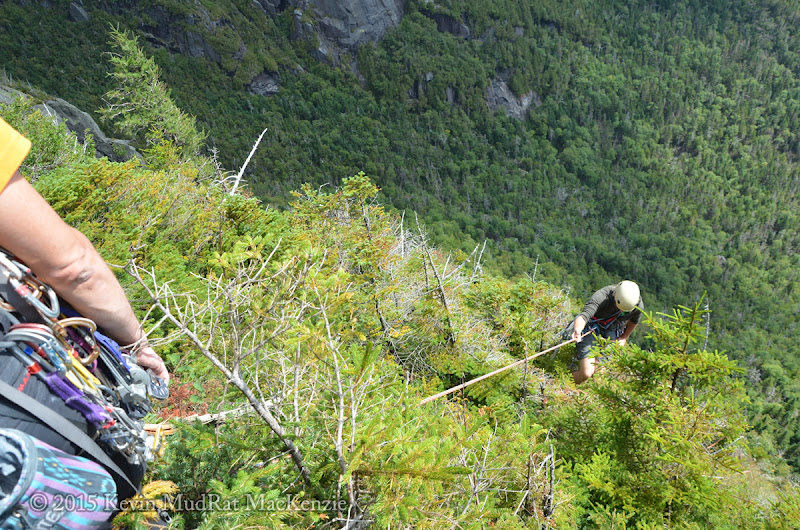