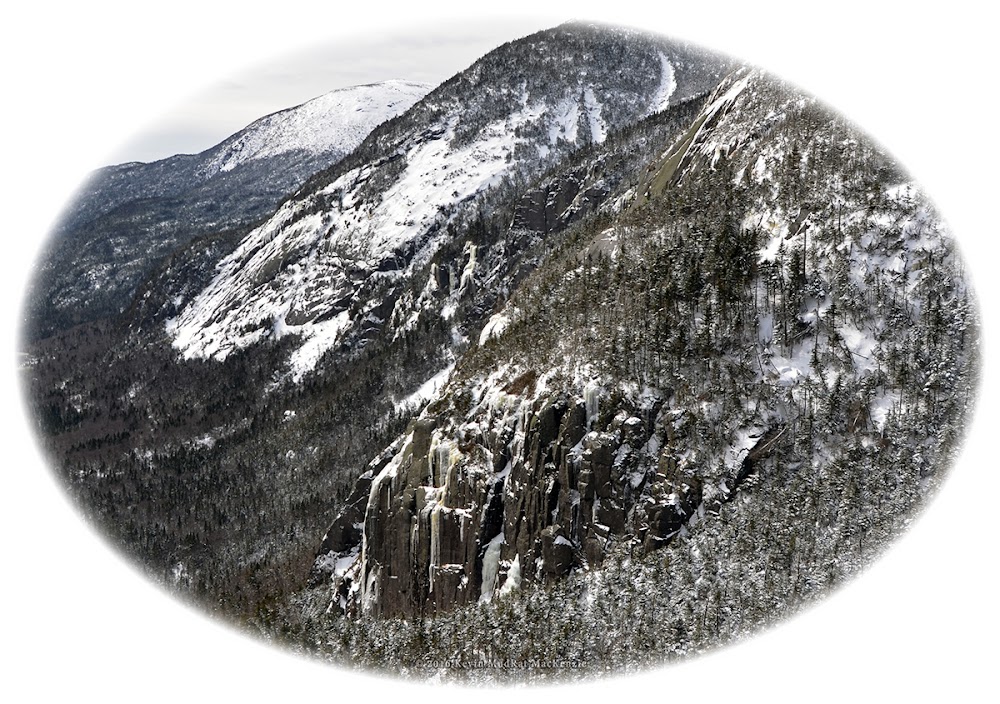 View of Marcy from the top of our first route...

Heeding the call of the mountains after nearly a month of fighting and recovering from the flu, I rallied for a last winter trip into Panther Gorge. The ice on Mt. Haystack captured my curiosity during 2015 and again this past January when we studied the lines while climbing on Mt. Marcy. Additional photos by Matt Dobbs during the first ascent of Sorry, Kevin (WI4) at the end of February fueled my urge to climb a couple of them before they came down with the impending warm weather. No ice climbs had been documented on that side of the gorge so it seemed like an opportune time during a winter made for ice climbing at elevation.

A last minute message to Nolan Huther on Friday afternoon set the ball into full motion for Saturday. We set out from the Garden at 5:30 a.m. on frozen mud and ice which lasted for a couple miles. The theme for the subsequent few miles was an inch of snow over ice. Only on approach to Slant Rock, did we find more wintery conditions. It all changed at the Marcy/Haystack col when we stepped off trail. Snowshoes kept us on top of a semi-supportive crust much of the time, but we fell into three-foot deep spruce traps several times. It was nice to find snow somewhere this season even if it’s not very deep.

This trip marked Nolan’s first time in Panther Gorge. I’ll let him describe the experience in his words, but he reveled in the adventure to say the least. He led the bushwhack to help me conserve energy for leading the climbs. Our first target was 500 feet south of the trail on the Haystack side. It was conveniently located 50 feet north of For Whom the Lichen Tolls that Adam Crofoot and I “put up” on the largest of three free-standing pillars. We walked directly to its base in less than ½ hour and were preparing to climb by 11:00 am. 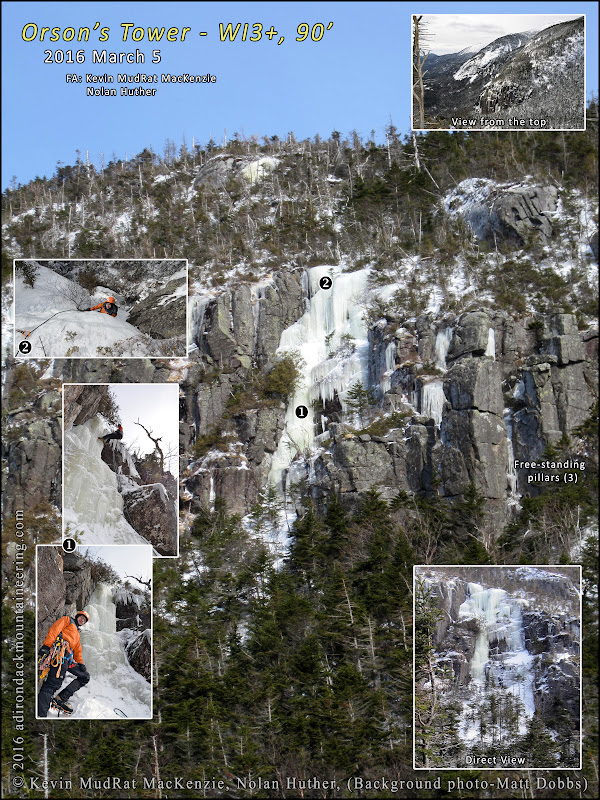 The ice flow was 90’ tall and split in the center by a small buttress of rock. It looked as enticing from below as in Matt’s photograph. The left side was the most appealing and several feet thick...perfect. There was a wall of rock to its left. I planned to use ice screws, but rock gear would have been equally appropriate. I started climbing and placed ice screws in seemingly bulletproof ice—screwing them in was extremely difficult even though they were sharp. The route was tucked into a depression in the cliff and protected from the sun. Awkward moves on account of the cedar made climbing the vertical pitch challenging yet fun.

I rested at a terrace above the crux. A 15-foot curtain of partially hollow ice was centered at the top while several consecutive bulges with shorter vertical faces sat to the left. The route ended abruptly in the krummholz where I set up an anchor and belayed Nolan as he climbed. He was soon next to me reveling in the feeling of climbing the first route of the day; a new one. A near-mishap on the way up made me question the wisdom of attempting a second route—sometimes internal head-games are difficult to overcome. I told Nolan that I might not be up to leading another line, but that we should rappel then bushwhack south to soak in the views if nothing else.

Suddenly I heard someone yelling. I thought, “What the....?” A lightbulb went off as I recognized the voice of Doug Ferguson, a mountain guide. He started at 3:00 a.m. and had already climbed Gothics’ North Face, Saddleback, Basin and was en route to Marcy. Thereafter, he planned to climb Colden’s Trap Dike...that was just Saturday’s itinerary. We chatted for a few minutes before he spotted us on the cliff. This reminded me of our first meeting when we were yelling back and forth from different areas on Gothics’ South Face. I tried coaxing him into the gorge to lead a route, but to no avail. I heard Nolan snickering as we talked across Panther Gorge. 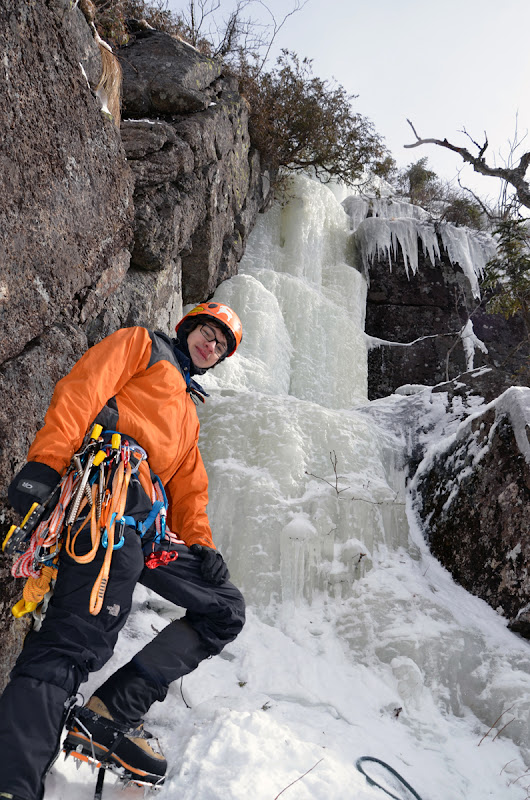 Nolan at the base of Orson's Tower

The perspective of Marcy’s Panther Den was spectacular. The broken columns of stone were riddled with smears of ice born of heavy ice flows at the top. To date, they are unclimbed and highly technical lines. We relaxed, talked and prepared to rappel. I felt relief and satisfaction once I was at the base eating a snack. The 90-foot route, Orson’s Tower (NEI3+) was done!

A short bushwhack led to the aforementioned pillars (towers)—the inspiration for the ice route name. Mountain guide Orson Schofield Phelps described these “shafts” in S.R Stoddard’s The Adirondacks Illustrated published in 1891. He wrote,

“Now we will pass on up the trail once more, just stopping to notice those shafts of rock across on the Haystack side. There are three of them, entirely detached from the wall near by, about ten feet square, and one of them near fifty feet high, with a loose cap-stone on top of it. The soft rock must have crumbled away between them and the main ledge while they were left standing.” 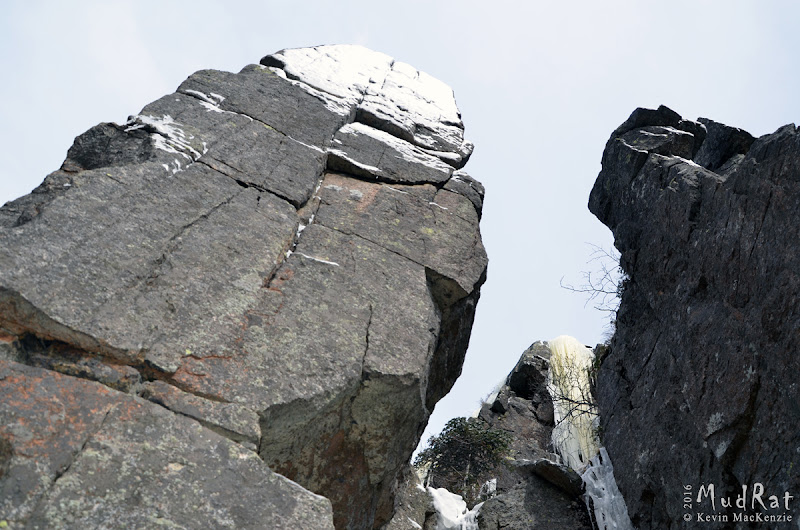 Two of the three pillars (left is the rock climbing pillar).

The pillars were partially coated in delaminating ice. We then bushwhacked south to a piece of talus with a nice view of both the gorge and our potential second route. I silently considered the options. A few minutes later we arrived. In summer this is a wet chossy cliff adjacent to the route, Eye for an Eye, led by Allison Rooney on May 30, 2015. This day it was an inspiring 10’ thick wall of near vertical ice. I studied the lines and felt that I’d be comfortable on lead. The ice was also somewhat softer which would make climbing easier. 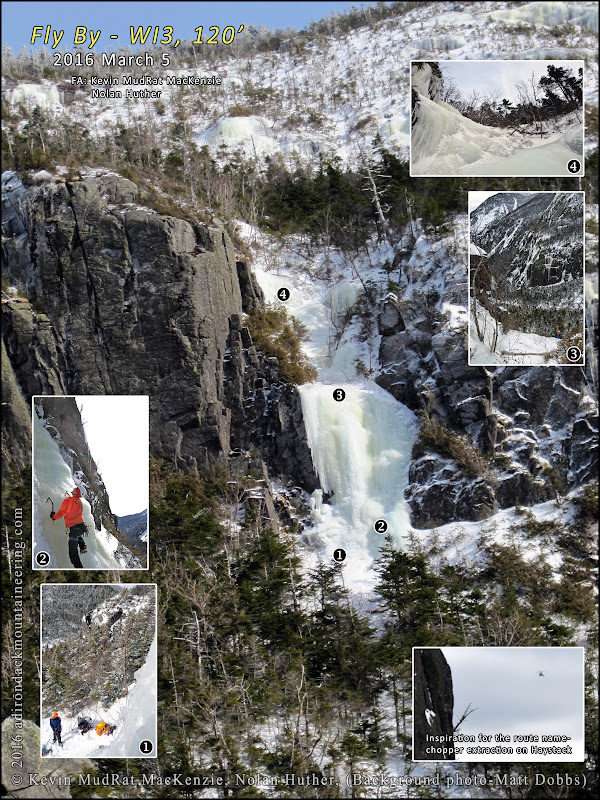 Nolan put me on belay and I started climbing. The screws went in easily in comparison to the other route. I was relaxed and enjoyed the experience thoroughly. The grade eased after about 50 feet at an ice gully—ice on the right and snow in the center. It was easy to keep only ice under foot as I followed bulges that led to a steeper finale. The slope above hosted loosely knit mountain ash, birch and evergreens. Icy ledges higher on the mountain loomed as I belayed Nolan.

We rappelled the 120-foot route in two sections. A stand of cedars halfway down on the climber’s left of the gully was integral to the second rappel. It was during the second rappel that helicopters began to fly over the gorge and around Mt. Haystack. We surmised that there was some sort of rescue going on, not just a drill. I later learned that someone with a leg injury was hoisted off Little Haystack. The thumping of the blades echoed in the gorge.

This was the second rescue I’ve witnessed since summer though the first person was hoisted from the Phelps Trail halfway between Slant Rock and the Marcy/Haystack col. In the end, the events inspired Nolan to suggest Fly By as a route name. We rated it NEI3. 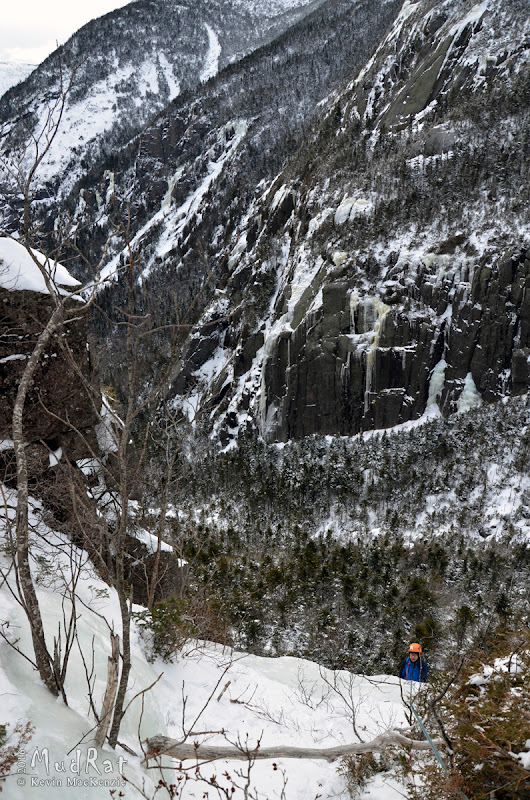 Nolan rappelling down the crux of Fly By (above). Chopper rescue (below). 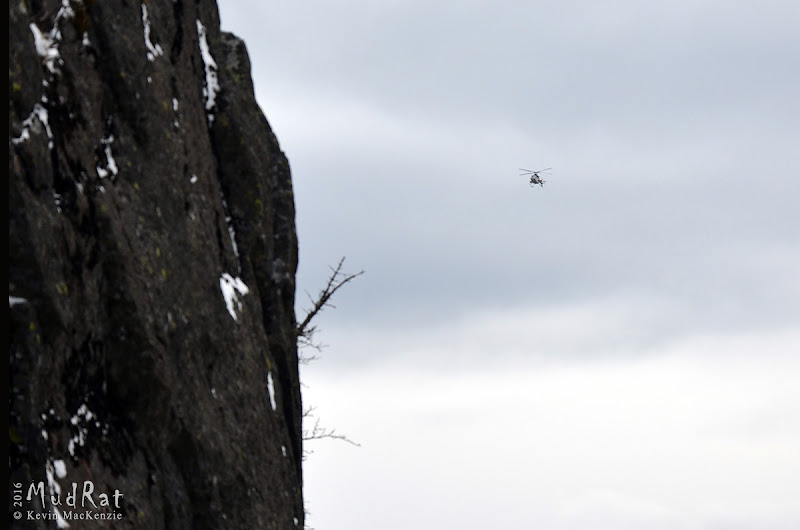 Nolan noted that he was satisfied with the climbs we’d done; I agreed especially since it was 3:30 p.m. Lines on the Ramp Wall about 100 feet south were options, but would be on thinner and harder. It would also be dark soon. The day had gone perfectly and there was no reason to push the envelope. We followed our trail out—again punching through the snow to our waist on occasion and reached the Phelps Trail at around 4:30 pm.

The exit was typical, a grind during which we talked about the day and finalized the route details. Each trip’s approach, though I’m often groggy, is often spent considering the options and mentally gearing up. The time spent in the gorge is usually a combination of feeling relaxed and remaining focused. The exit, though long, is a good way to unwind and absorb the details of the day. We arrived at trailhead at about 8:00 p.m. I said a prayer of thanks for a safe and fulfilling day in good company. 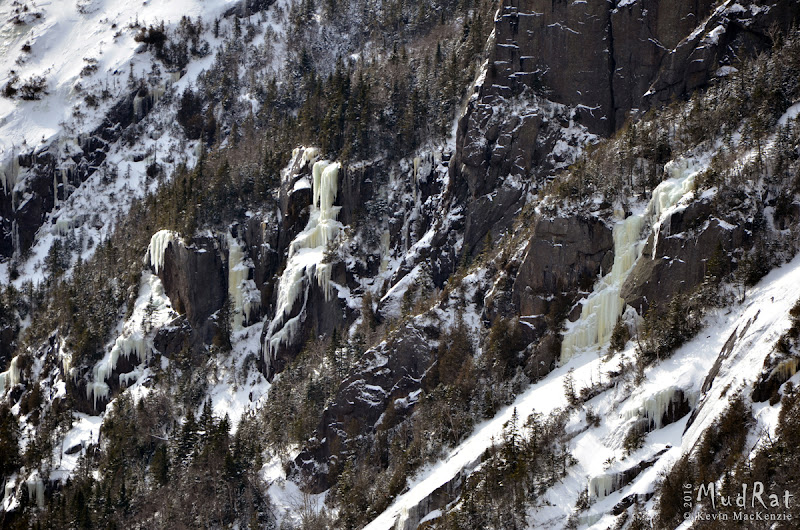 Deeper in the gorge on Marcy. Pi Day ice route from 2015 is on the right. Below, broken cliff next to Fly By. 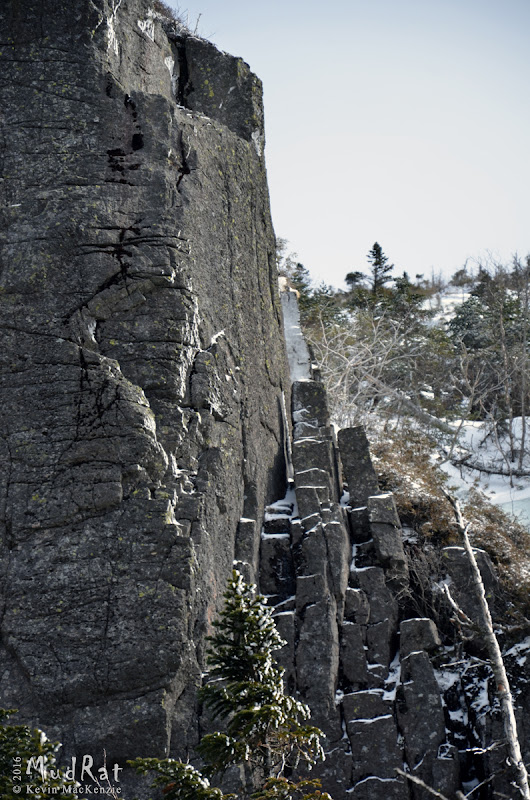