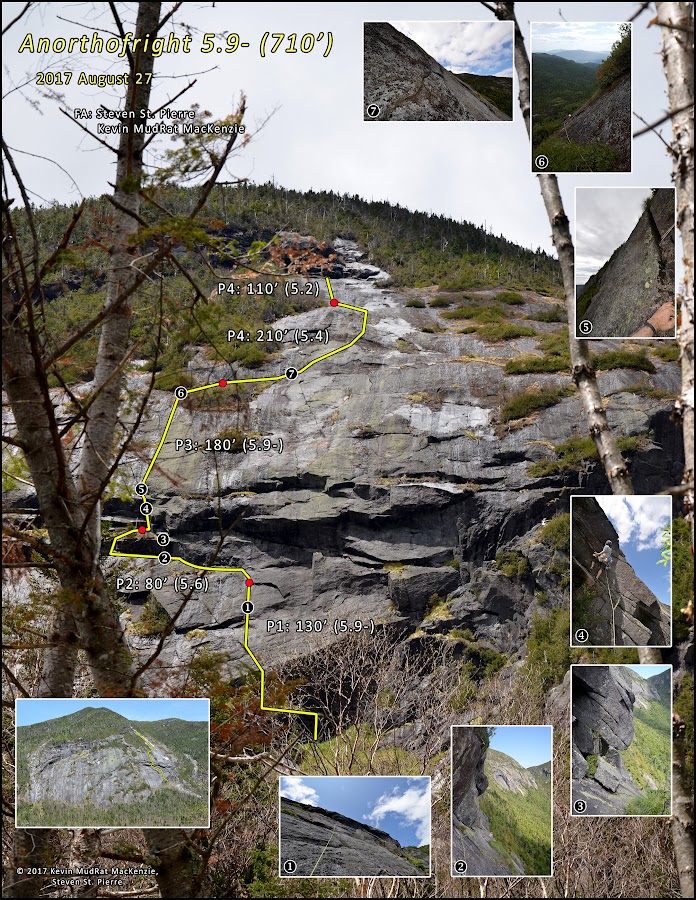 Rain, rain, rain was the theme for the summer of 2017. Weather thwarted efforts to climb in the backcountry most of the weekends since mid-June when I was last in the Gorge. A week before this trip we walked into the area and found the warm, humid air over Elk Lake updrafted and condensed on Marcy. It rained on us for two hours while we stood shivering in hopes of a break. That was not to be. We walked out with our tails tucked.

Steven St. Pierre went with me this time as I broke a vow to myself, one that I took on August 27, 2016—exactly one year before this climb. I swore to never day hike a route on Marcy’s East Face again. I wanted to camp if we climbed in this area. The trip to put up Revelations took 22 hard earned hours. With days growing shorter and an even shorter memory of the trials of the Revelations trip, I set my sights on the roofs and steep slab on the north side of the East Face. The top would follow the giant white streak from the 2011 rockfall. I hoped we could get the line up and exit to the car in a more reasonable time frame like 18 hours. I hear you laughing. Yes, it’s subjective.

We began at the usual time, around 4 AM, with cool temperatures and relatively low humidity. The stars twinkled brightly and I felt good about our decision regarding this route. It had exciting potential. We crested the Marcy/Haystack col around 8:15 and descended to the Panther Den. Skies to the south were a little hazy, but it was forecast to be clear.

Bushwhacking in the Gorge has been a series of navigational experiments. The closer one stays to the cliffs, the “easier” the terrain. We walked far too low in August of 2016 which added to the overall time it took. Steve and I passed the various walls and entered thicker forest beyond the Huge Scoop where we held to the same elevation until reaching Grand Central Slide. We crossed the streambed and trekked downslope, around a buttress and up to a glade below the East Face and our target. Raspberry and blackberry bushes were overtaking the glade (it was stripped in 2011 by the rockfall). It was around 10:45 when we reached the base of the route.

I’ve often noted that photographs can be deceptive and that there are often surprises even after dozens of study sessions. I anticipated that the start would be on a slightly off vertical wall with good edges to a series of cracks. Well, I was correct. It was off-vertical but overhanging rather than positively sloped. I studied the stone and tried a couple of options before getting frustrated with wasting time. Steve had an idea, so I offered him the lead of pitch one. The time was 11:30 AM when he bouldered up, gained a narrow ledge and traversed left. There was a little seepage, but it was quite dry overall. A nice change! Steve disappeared after climbing a vertical crack. A while later, he yelled, “Off belay!”

AN OVERHANGING START TO THE ROUTE 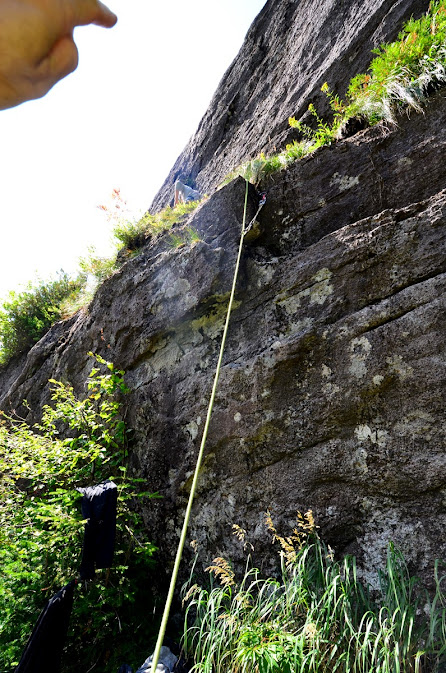 I readied myself and climbed. I can’t say I made it look as easy as Steve did, but I gained the ledge and finally the pitted face. The first thing one sees when cresting the lower wall is a large set of roofs that look like an ominous gray tsunami. The overhanging wall dwarfed Steve's frame. Easy technical face climbing and cracks led up to a foot-high left-facing corner and his anchor. The wall above was dead vertical below an overhanging roof with a horizontal crack in between.

We decided to trade leads, so I took the next and added a traverse into the mix. I knew there was a breach in the wall to the south. Thus I followed a small crack toward my target. The slab underfoot varied from about 50-75 degrees as I worked my way across, placing protection where I felt necessary. I stepped down over a corner and looked up to where the breach was located. I hoped for a clean crack, but found a somewhat mossy corner. There was enough clean stone on which to work, so I placed some sketchy protection above my head and committed to the move. Exiting the corner required the use of a couple of blueberry bushes before I flopped onto my stomach and walked up to the roof to create an anchor. The scenery was breathtaking. Intermittent steep grassy ledges led to the south and a broken roof system traversed north. Blocks under the roof were held in place by pinch-points. It was reminiscent of climbs on the Agharta Wall and the Huge Scoop. Steve was in the background and below a roof that looked ready to swallow him. The northern jaws of Marcy and Haystack were lit with intermittent sunlight. If I could only make a moment last forever...

TOP OF PITCH ONE BELOW THE TSUNAMI ROOF 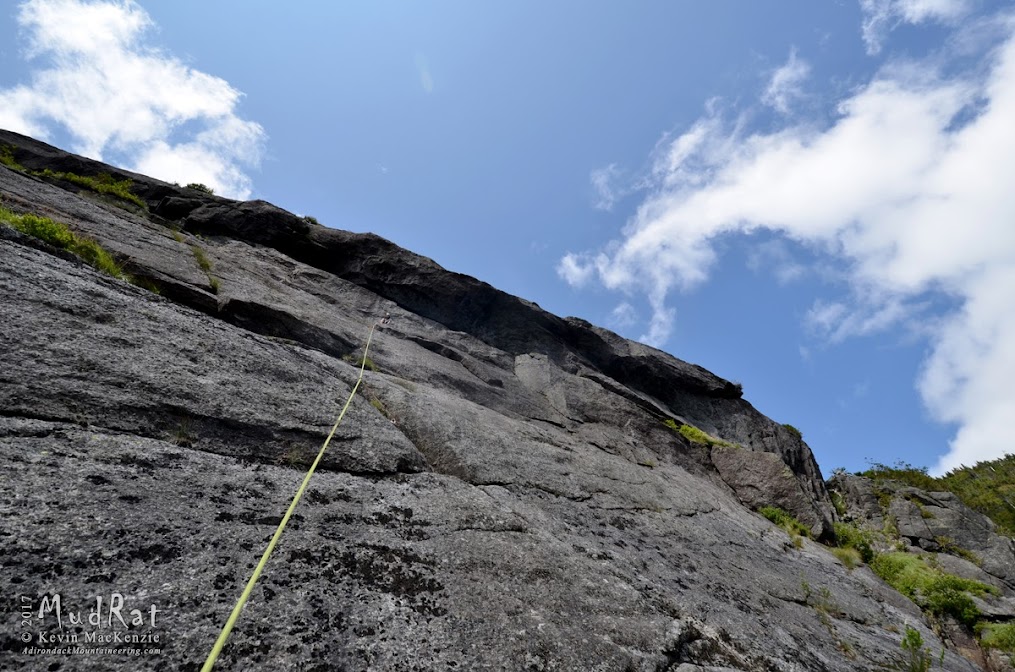 LOOKING BACK WHILE LEADING THE TRAVERSE, STEVE SITTING ON THE SLAB 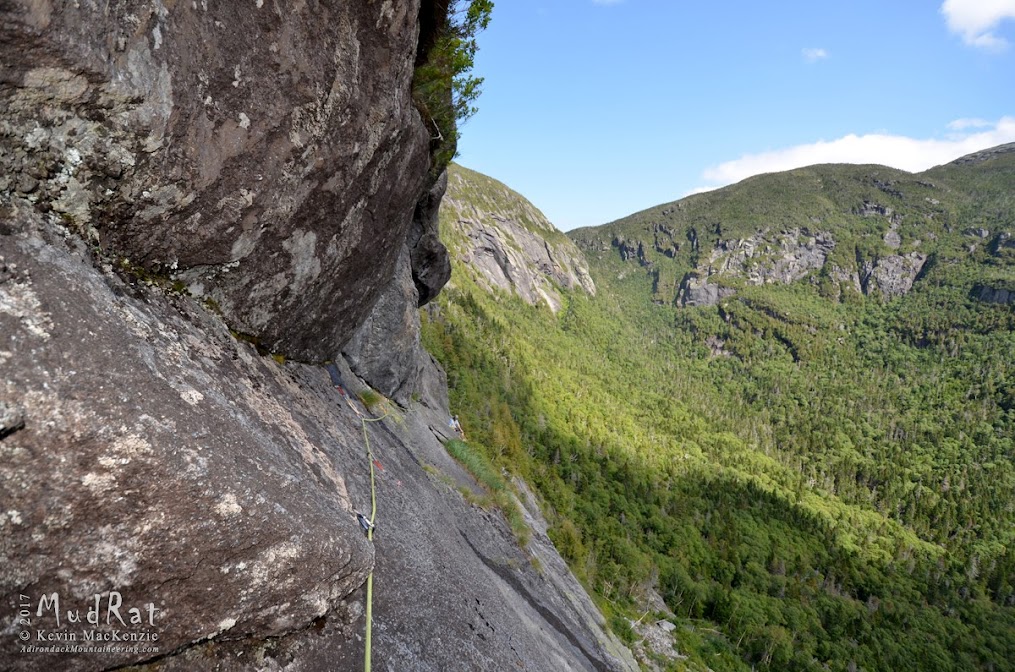 BREAKING THROUGH THE ROOF 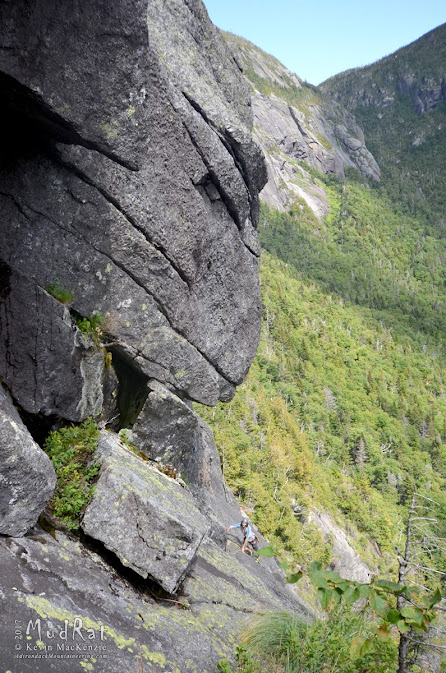 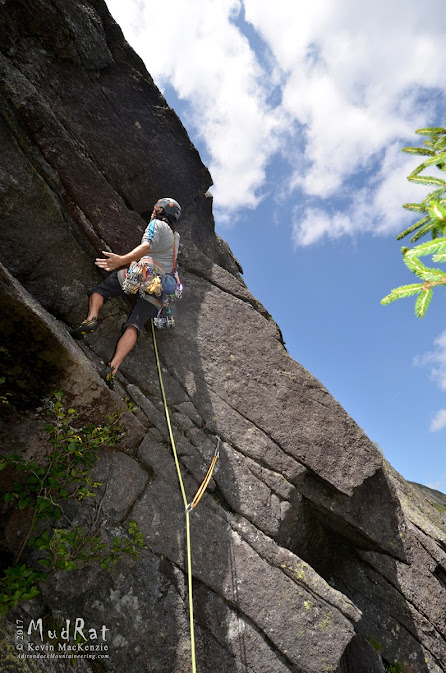 I belayed Steve to the ledge and warned him that he’d probably hate me for the last move. He commented on another harder option that I’d apparently missed while focusing on the traverse. There’s always another day. Pitch three was Steve’s to lead...the money pitch of the day. A dark line in one of my beta photos betrayed an obvious crack where I knew we could breach the roofs. I didn’t expect it to be so aesthetic. It was an arm-deep crack behind an overhanging flake on a slightly overhanging wall. Small blocks created thin cracks in the wall. He reached its top and disappeared. I paid the rope out in small increments until about 180’ was gone. We couldn’t hear each other. A scream sounded like a faint echo off Mt. Haystack. A tug on the rope and faint, “....belay,” signaled to take him off belay so he could pull up the remainder of the rope.

I climbed the flake, laying back from its edge while walking up the wall, my body horizontal. The overhang tilted me back at its top, but my arm in a crack with sharp crystals drawing a little blood kept me in place. I expected the face to become more moderate, but followed a crack up a 75-80 degree wall before exiting it on a dimpled face of the same angle for 20-30 feet. It moderated as I crossed various cracks and a tree island. Steve fell into view near a vertical wall with a large crack above another tree island. It was a stellar exposed pitch.

LESS THAN MODERATE FACE CLIMBING FROM THE CRACK IN THE PHOTO 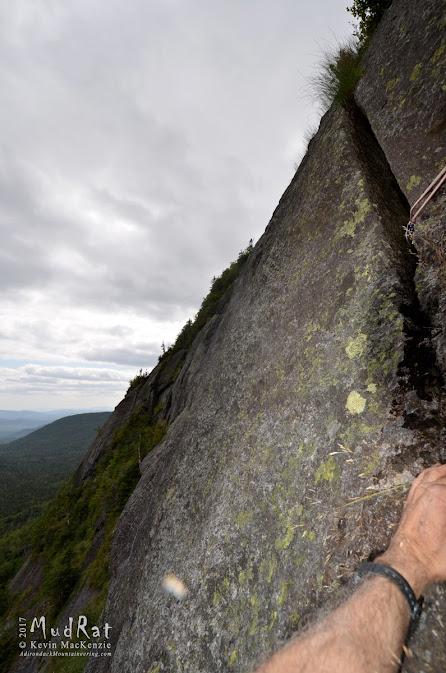 TOP OF PITCH 3--IT'S BETTER THAN IT LOOKS

I continued to pitch four which was comparatively easy climbing. We followed a short grassy ramp to large cracks that led to the white streak; stone scraped clean by the rockfall. This is terrain on which I’m used to soloing, but doing so above an ever steepening face that terminates with a roof wasn’t appealing. The pocketed stone, sharpness of the surface and cracks allowed me to climb quickly while placing gear every 40 or so feet. I climbed about 200 feet and aimed for a bowl along the edge when Steve yelled that I was nearly out of rope. I belayed him until he passed by. We soloed the last 120 feet or so of “fun 5” face to its top below a vertical cliff from which the rocks had tumbled. This was the exact area that I’d walked across with Ranger Scott van Laer almost half a decade earlier. It was just as sparkling white.

It took 4.5 hours to climb the 710 feet of the route that we named Anorthofright. We “only” had to navigate down to our packs and bushwhack out...hopefully before dark to avoid the mind-numbing night exit through the talus. Options included multiple rappels down the face, rappelling the central gully or a walk-off to the north. Having descended Grand Central several times, I decided the walk off would be the most expeditious option. We scrambled across the face through small tree islands until I could see the slide. The East Face was low-angled at its top right, but we remained tied together. The edge of the face was only about 15’ high when we reached the forest. We climbed down and bushwhacked to the slide.

So many hours in tight climbing shoes had taken a toll. Our toes were angry with us! Thus we walked down the slide barefoot with sighs of relief. I felt like I was visiting an old friend. This trip marked my fifth visit to the slide. We entered the woods again before the lip of the waterfall and bushwhacked to the top of a 30’ ledge from which we rappelled. Bushwhacking in rock climbing shoes is always “interesting” and the blackflies had their fill of my blood during the endeavor. If you ever hear someone say that they’re gone by the end of June, don’t believe them!

We reached our packs at 6:00 PM and I contemplated the ¾ mile bushwhack back to the col. This was the only negative aspect of climbing so deeply in the Gorge. We still had daylight on our side, but we’d have to maintain a steady pace. Navigating the terrain across terrain with gullies, talus and sod holes with the rope and metal on our back wasn’t appealing. We reached the northernmost cliff as twilight overtook the cirque and the Phelps Trail as darkness fell. It was around 8:00 PM.

To say the remaining 7.8 miles was arduous is an understatement. Rests were longer and our pace was slower than at dawn. It was a blessing to reach the trailhead at about 12:30 AM.

Afterthoughts: The East Face hosts a variety of lines ranging from steep friction types to intimidating roofs bands. The central gully roughly bisects the face. The most technical terrain and future potential, should anyone want to push the grade, is right of the gully. There are harder possibilities than Anorthofright, most likely to the right of the route. For now, however, I’m done with the East Face. My curiosity is satiated, the same curiosity that’s drawn me to the area so much over the last five years. The face surpassed my expectations and held many concealed surprises. Is a 20 hour day worth such a route? Absolutely—to me. Most may want to camp to make it a more relaxing experience. I felt rushed given the night exit of 2016. More time to relax on each pitch, explore variations and appreciate the minutiae would have been nice. Do I have regrets? Never!

OH, THE VIEWS! OF COURSE, THAT'S HOW WE HAD TO BUSHWHACK BACK OUT... 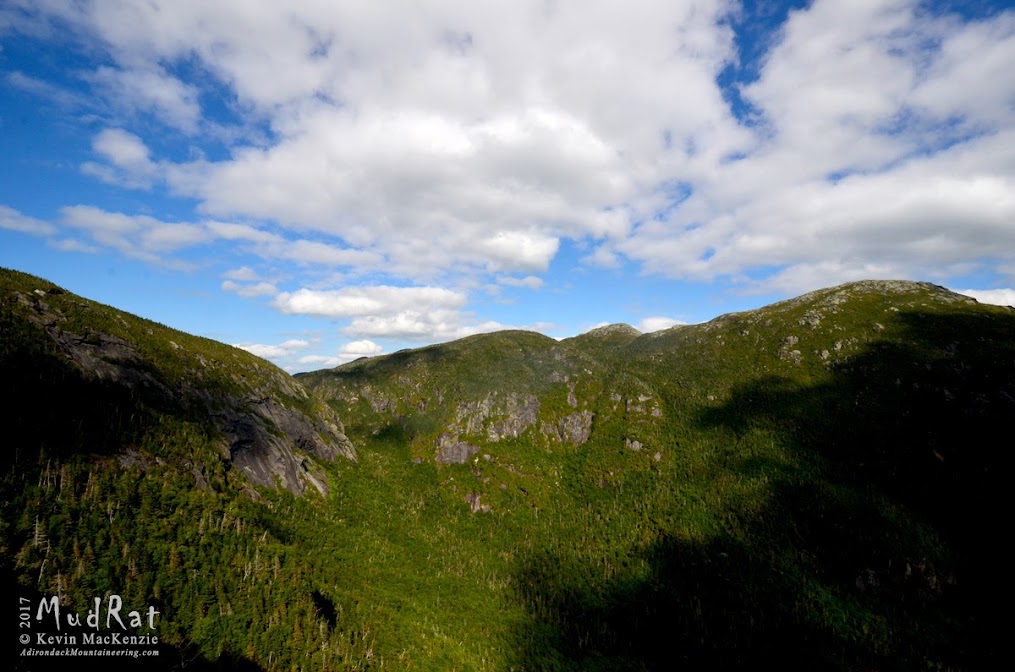 DUSK AT THE PANTHER DEN 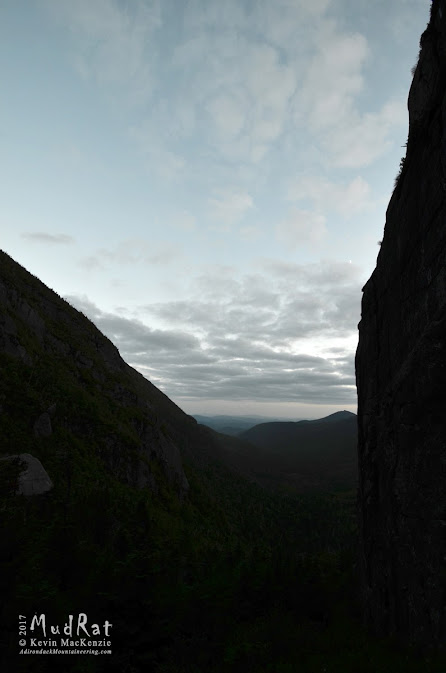 The wet lichen and overhangs always made that seem really creepy

It was a fun climb. We really felt out there ;)