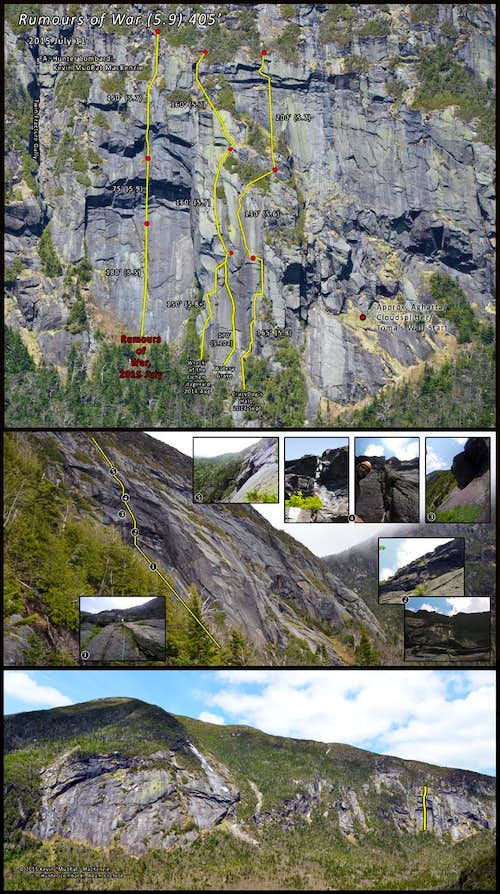 I was studying beta photos and dreaming of warm days last winter when a close-up of a rectangular scoop at the southern end of the Marcy cliffs
caught my eye. Its cracks begged to be climbed. The scoop is really a 200 foot tall slab capped with an intermittently vertical and
overhanging cliff riddled with parallel cracks. The cracks run an additional 200 feet up through various smaller roofs, chimneys and
overhangs to the forest above.

My attention further focused on the large central crack that dissects the area, a plumb line from the bottom to the top. It had potential to
be a stellar route. Bill Schneider, a veteran to Panther Gorge, joined me on June 14th to attempt a climb of the crack—. It was too wet so we instead added new route up the Panther Den Wall to the north.

I don’t often give up on idea once it’s drawn my attention so I waited for drier weather to plan another trip. The Huge Scoop, our name for the
area, is farther from the Marcy/Haystack col than any current rock climbing route in the gorge except one on the East Face of Marcy. It’s
an hour’s bushwhack after walking 8 miles to the Marcy/Haystack col from the Garden Trailhead in Keene Valley. I explained the logistics to
friend and climber, Hunter Lombardi. He was up to the challenge.

We met in Keene Valley at 4:45 am, discussed logistics and began the long trek to our destination. As usual I remember little of the first
few miles. It is a time of setting a suitable pace, awakening and mentally preparing myself for an arduous day. We arrived at the north
end of the gorge around 8:45 am and began the bushwhack to the base of the first of several cliffs.

As we exited the dense spruce forest onto a grassy slope at the base of the Panther Den Wall, I heard Hunter exhale with awe. It was his first
visit to this remote location. He turned and said, “This IS the promised land!” I retorted, “There’s no place quite like it, just wait until you
see what lies below to the south.”

After braving talus, sod-holes and more sharp branches, we arrived at the base of the Huge Scoop. It was 10:00 am. A horde of hungry
blackflies arrived soon after—someone apparently rang the dinner bell. Each wall of the scoop is riddled with fractures shooting in every
direction. It is a dizzying arena with the slab running at a slope of more than 45 degrees along a vertical wall on the right.

I studied the cracks. The 9-mile walk would be for naught if the cracks were too wet to climb—it had rained heavily though not for several days.
The running water Bill and I found weeks ago had decreased to mere seepage, but the cracks were still not dry. We discussed climbing an
adjacent line and opted to make a decision once at the base of the headwall. I led the first pitch of 180 feet up the technical slab
placing protection only occasionally before setting up an anchor at the top. 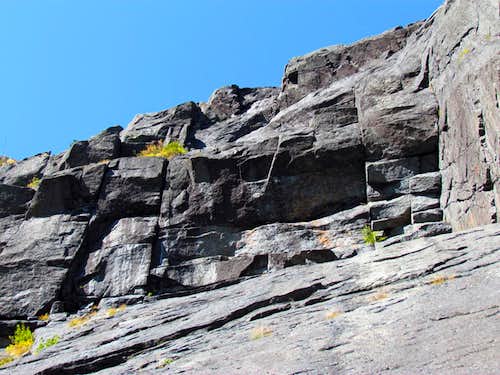 Crack addict!...The crack with the tree island on top is our line
though it continues far beyond.

A light wind kept the blackflies at bay as I looked at the nearby cracks and found that the center offered the driest option. Perhaps the day wasn’t lost. I belayed Hunter to my position while soaking in the scenery. The blocky overhangs and split anorthosite made me feel insignificant. Evidence of nature’s power surrounded us.

First ascents can be tricky and I feared the line might appear deceptively easy. I had studied every nuance of the crack over the last year, but a photograph only reveals so much information and reality
sometimes surprises me in disconcerting ways. After internal deliberation, I conceded the lead. The gorge is a bad place to test one’s skills only to find them lacking.

Hunter assessed our proposed line once he was below the wall; he felt confident that he could lead it. This would be our second pitch and, in hindsight, the crux.

Hunter describes the experience, “We weren't sure what we were getting ourselves into which is, perhaps, what drew me in the most. The gorge climbs are, for the most part, terra incognita and we are the first ones to explore this high in the scoop. There are few places nearby that offer that type of mystery. I guess that's what I love about the Adirondacks - it's always an adventure.

“Pitches two and three were just as exciting and enjoyable as the slab climb. They were easy to protect, in fact they ate gear except for the last 25 feet of pitch two. The moves were fluid for the entire length—405 feet—yet required diverse climbing techniques. The route was a combination of hand, finger and off width cracks as well as slab and chimneys.”

I always find it amazing that a single route can hold unique experiences for each climber depending on one’s experience level. While I found
much of the route fluid, I also felt some moves were quite awkward. This cemented my confidence in the decision to relinquish the lead to
Hunter.

A small grassy island 75 feet above the first pitch served nicely as a belay ledge. A vertical crack with a few cams anchored us securely in
place as we discussed options for the third pitch. Weathered slab led to a rising ramp that led into a chimney with a hand crack in the back.
Again, it was wet deep in the crack, but easier than below. I felt the sharp feldspar crystals dig into my arm as I jammed it into the crack to
secure myself and look at the scenery.

The cliff fell away along a distinct buttress that MaxSuffering (Adam) and I climbed twice last year. My position offered a new perspective of
other potential ascents in the scoop and up the buttress—something I’ll be revisiting in a few weeks. Once above the crack and on lower angle
slab, it was child’s play to climb to the spruce above and finish the route.

Same cliff, different perspective. Kevin belaying 180' feet up from the the forest.


We used a single rope so our options were somewhat limited since we could only rappel 100 feet at a time. We angled south to a small tree island adjacent to a large gully—another feature on Marcy that I was curious to explore.

For the second rappel, we again found trees strong enough to support our weight and descended the vertical wall of the gully. Twin Fracture Gully, as I labeled it, was roughly 25 feet wide. Two distinct fractures joined at a confluence about 100 feet below the top. Large overhangs capped each. Hunter coiled the rope and wore it backpack-style as we made a dicey descent down the chossy gully. Further along, we reached a large chockstone that blocked the way. ...time for a few dicey
unprotected moves on algae-covered stone!

Ten minutes later at 4:30 pm, we were back at the base of the slab (so were the blackflies). The route had taken 6 hours to complete. It was harder than we’d anticipated and I looked like I’d battled a bobcat. All that remained was to bushwhack out of the gorge and walk another 8 miles back to the trailhead. We had one final bit of business to attend to before leaving, however.

The Huge Scoop’s central line begged for a route name with a dark theme—“Rumours of War” seemed appropriate. The Book of Revelation speaks
of “wars and rumors of wars”. Even a secular interpretation holds meaning; if you want to climb this route, you will battle to get to the
base and climb hard to top out. Make it a 19-mile round-trip dayhike for the full experience—to make it a war. 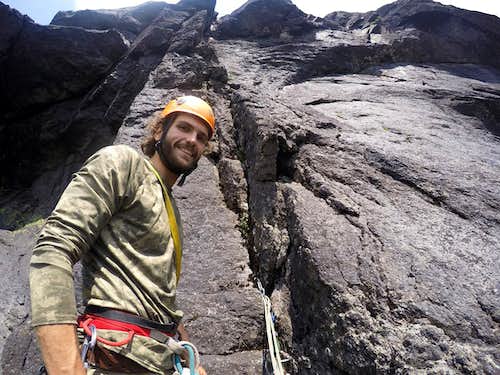 Above, Hunter below pitch 3. Below, the same stance looking down. 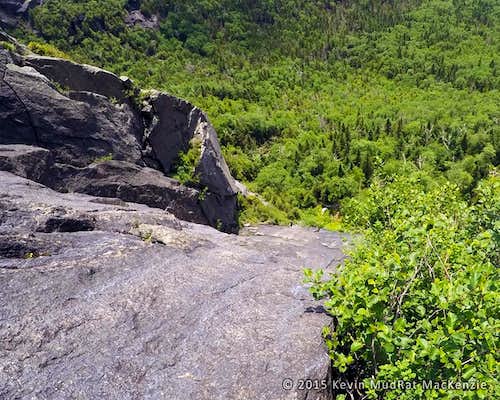 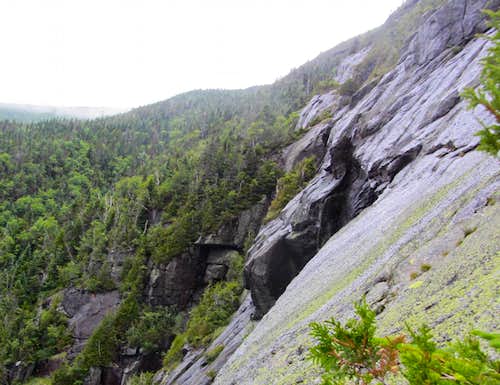 Looking at pitch 3 from Wreck of the Lichen Fitzgerald on a misty day in 2014. 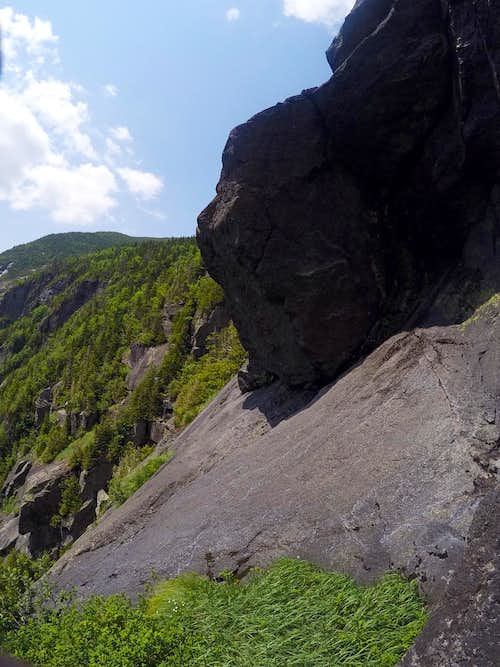 Overhang at the bottom of pitch 3...maybe something for a different time!