Prior Panther Gorge Explorations:
3, 2, 1...beep, beep, beep. It was an act of sheer will that peeled me off the bed when the alarm split the silence at 3:50 a.m. Getting up this early is getting old or perhaps it’s just me feely weary. Shorter daylight hours and considerable wear and tear on my body from all the recent trips with a heavy pack certainly contributed to a lack of ambition. It was time to make the (possibly) last rock climbing trip of 2015 into Panther Gorge. Dan Plumley of Adirondack Wild (and Keene Valley) graciously accepted my invitation to thrash around on a rope for a day. He too was burning the candle at both ends from an engagement the night before so we collectively got about 6 hours sleep—plenty!

I’ve learned much about my limits and my ability to push them over the years. There are a few things I recognize as “stop” warning signs and other that are a bit more flexible. I experienced the latter signs as I set about readying myself.

All things considered including the fact that I’d be leading most of the climb led me toward an easy route on the buttress adjacent to the Feline Wall. It looked like comfortable slab climbing to a huge boulder perched about halfway up. Thereafter, it seemed as if we’d be climbing more slab and cracks, but the details were difficult to discern from my photos. Looks can be deceiving; cliché, but true.
Dan and I met at Rooster Comb parking lot at 4:30 a.m. and sorted gear. The Garden was full so I parked at a friend’s driveway after bumping into Claudia and Don Slick just downhill from the trailhead. They too were heading to Panther Gorge to tackle Grand Central Slide and the Old Slide though I didn’t realize at the time. I was en route to park the car in a friend’s driveway which saved our day. The time stood at 5:30 when Dan and I began the 8.75 mile trek to our destination. With shorter daylight hours, we had a longer walk in the darkness and arrived at the Marcy/Haystack col at about 11:00 a.m.

Twenty minutes later, I broke through the krummholz near the Panther Den wall and waited for Dan as the wind whipped up from below. It was going to be a blustery day, but as long as the rain held off until after the climb, I’d be happy. Back to Dan—it’s always fun listening to the words that each person speaks when they first behold the view to the south. I heard thrashing and Dan finally emerged. I sat with a smirk on my face and waited... “Holy S%*t!” echoed off the crags of Haystack. They were exactly what I expected.

We descended and re-entered the woods a couple hundred feet lower. Ten minutes later we reached the lowest portion of slab before the Feline Wall and its three routes, approximately 1/3 of the way down along the Marcy Cliffs. This would begin our proposed route. By the time we ate lunch and readied the gear it was noon. Sunset was at 7:00 p.m. so we had sufficient time if all went well—it would be a late exit. 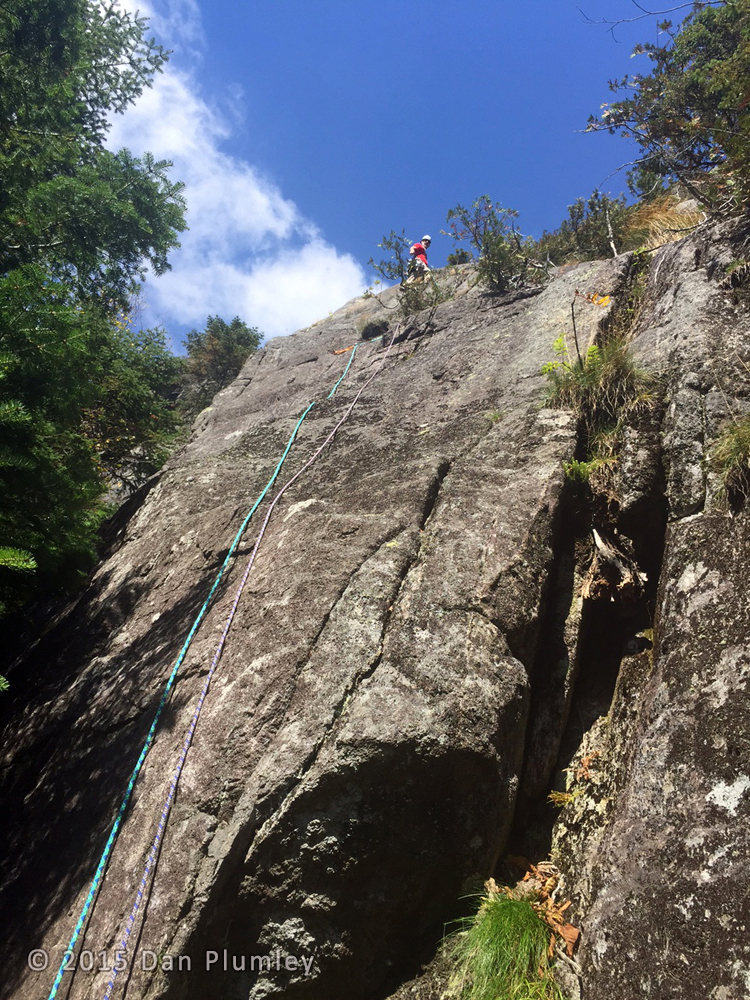 I planned to lead much of the route so I quieted my mind, said a quick prayer aloud and picked a starting point. A rising ramp led to steep face climbing. Small edges led to a horizontal crack about 50’ up. It was steeper than I’d envisioned, but there were more cracks than I thought so that was a good trade off. Still a bit apprehensive as is normal, I yanked the chocks into the cracks hard and climbed. The view south culminated with the East Face—always an inspiring sight.

Continuing, I followed finger and hand cracks. They petered out about 10’ below a band of cedar and grass—the crux of pitch 1. My legs began to tremble from exertion as I studied my options with my big toes lodged in the crack. Only my fingertips on a few nubs of feldspar and the friction of the climbing shoes held me in place as I worked up to a bench of vegetation while showering Dan with dirt, pine needles and more than a few small branches.

Easy crack climbing led to a large terrace below a roof where I set up an anchor and belayed Dan. Pitch 1 was over, about 160 feet of climbing. I looked around and relaxed as the wind buffeted me from the south. The view just below my perch was of the Feline Wall, home of several routes including one that Justin Thalheimer and I added in August. Above was a house sized boulder that formed the roof. I grew curious as to what lay above, but wanted a mental break from leading. Dan worked his way up and commented about my gear placement—I guess the chocks were welded to the rock which made extracting them a bit strenuous from awkward positions.

The bonus came about a week later when Don Slick posted his Panther Gorge adventure. He managed to capture a few shots of Dan and I on our belay terrace—tiny dots amongst the vast rock and greenery of the gorge. Thanks to Don and Claudia!

Dan led next by following a huge crack to a vegetated ramp. This led to an area where he was able to climb over the lip and up the low angle slab to a smaller room-sized boulder. Beyond was dramatic terrain, more-so than I’d imagined. What rugged beauty! It was turning out to be an exciting route. 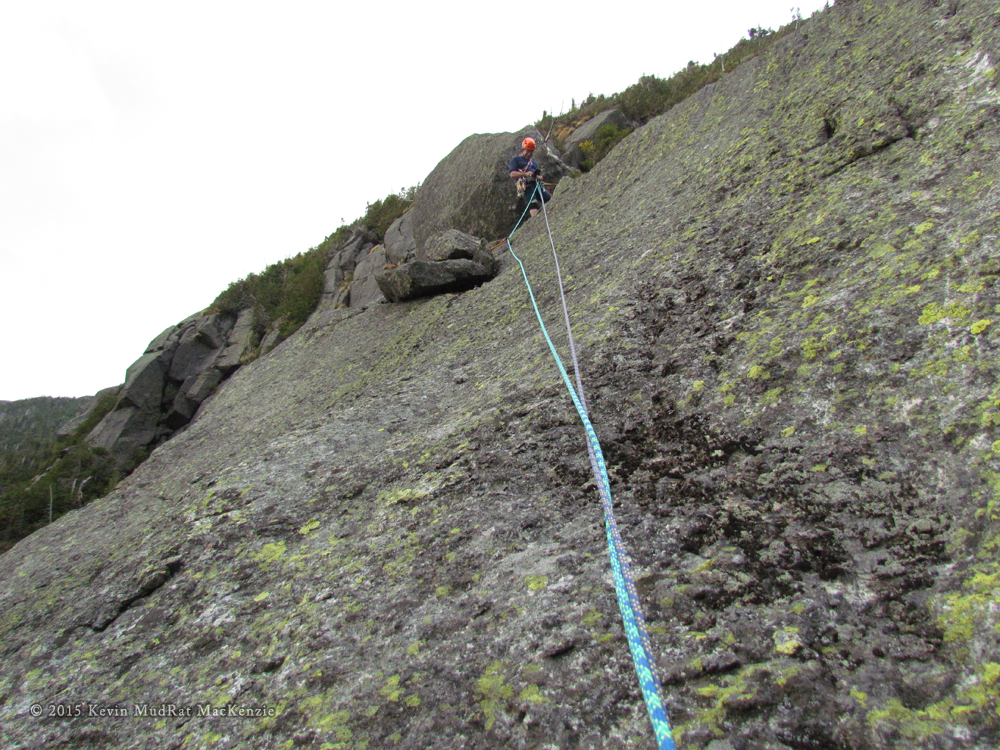 Above, Dan belaying from a boulder at the top of Pitch 2. Below, shot of Kevin and Dan by Don Slick from farther south during their trek. 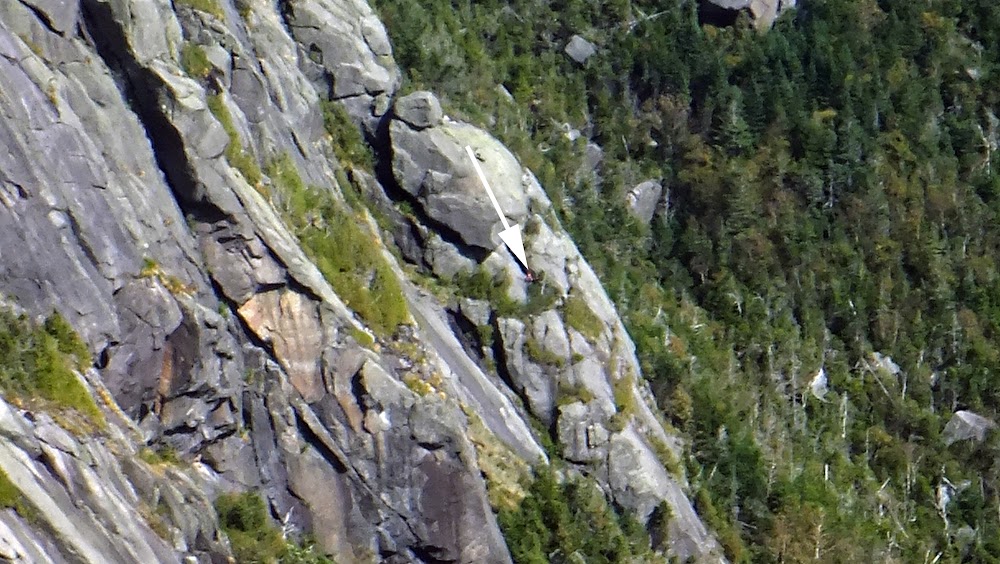 I led pitch 3 after scoping the terrain. There was a vertical wall in between our position and a steep slab sandwiched between two huge broken walls of stone and the gully that splits the Feline Wall. I worked over to the wall and traversed the face using a handcrack below a small ceiling. There were amply places to put my feet and lock my hands so I relaxed and ‘played’ around as Dan belayed and photographed.

I considered my options once on the slab. Climbing the gully would result in placing gear in loose stone and it was less of a technical climb. I put on my geology cap for a moment and realized the gully was a sheer zone rather than a trap dike like I originally thought. I also considered climbing the huge left-facing corner with small fracture caves. It was overgrown and uninviting at the bottom. A face/crack climb this would be!

I ascended to a small ledge about 15’ up and protected myself from a crack. By now, I was above the moss in the corner and needed to move over to the dihedral where there was additional protection. Getting there was the issue—another traverse. The details area a bit fuzzy, but I found a secure hand hold and was soon standing in a large hole in the dihedral. I jammed a cam in a crack and worked back toward the center of the face and up to two interesting parallel hand cracks above a loose block. I continued to the top where there was low-angle slab. This led to a vertical wall with several cracks and a small chimney below a small ceiling.

I studied the options along with the sky. I vaguely remember feeling a drop of rain and hurrying my pace. Once up the chimney, I made a few moves on questionable rock to another chimney where I became stuck for a time. It looked like I’d be able to climb it from below, but it was too mossy. An exposed traverse and face climb directly next to the top of the gully was my only option. To me this was the crux, but there were several and each felt as sketchy as the one before.

I put my faith in the climbing shoes as I climbed to a few small cedars growing on the near vertical face. I also managed to create a situation with considerable rope drag so I felt like I was climbing with a 60 pound pack on for the last 30 feet. The bushwhack up to two stout trees on the opposite side of the sphagnum moss-covered gully was a battle in and of itself.
Dan climbed in a lightly spitting rain as the wind increased and temperature slightly cooled. About 30 minutes later I heard grunting and hooting. By 4:30 p.m. he was sitting next to me—Promised Land was up! We only had to rappel down the gully, something I was looking forward to. My curiosity was piqued as to what it looked like up close. 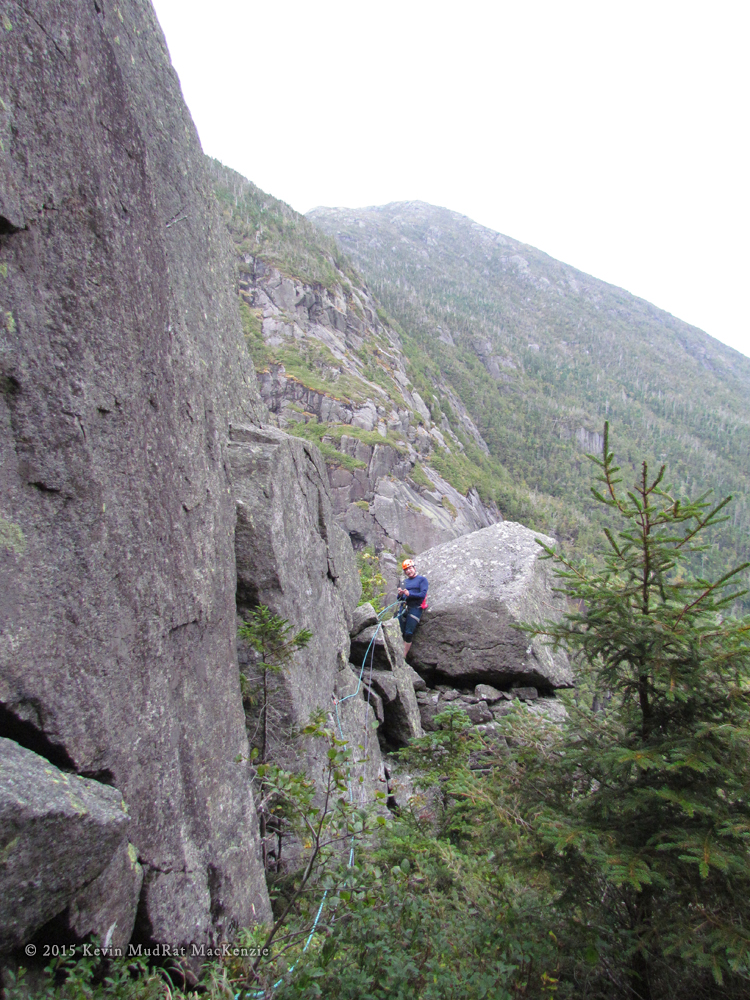 Above, Dan before the traverse. Below, Kevin leading the lower slab of pitch 3. 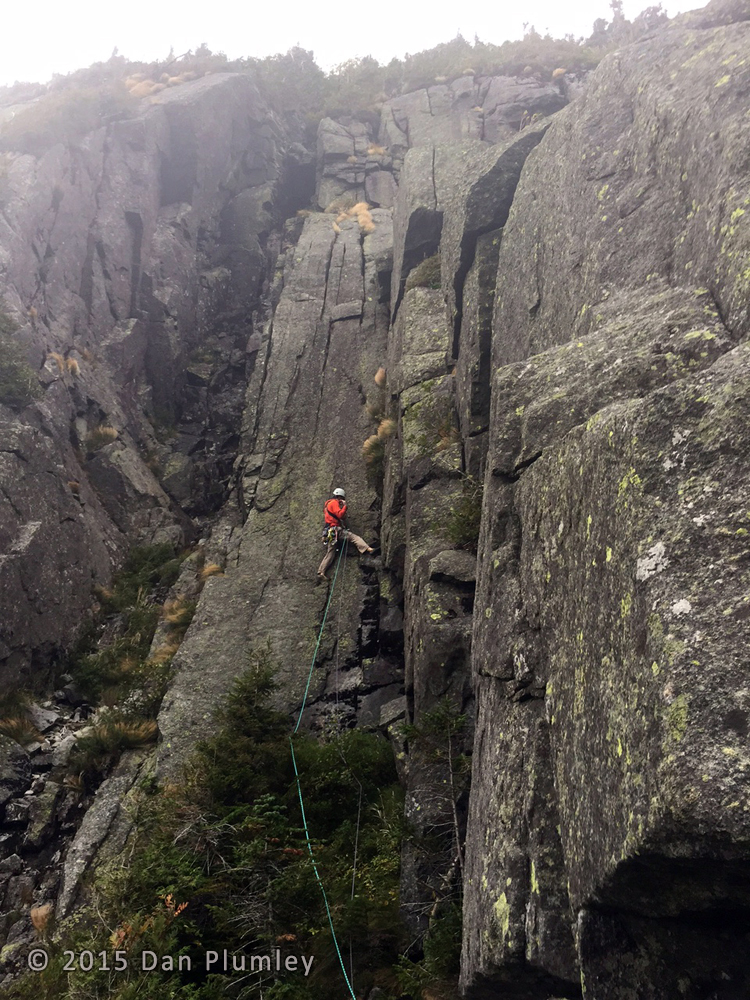 I rapped over the first terrace spinning gently since the roof above was overhanging. The following section was similar. In essence we descended a 10 foot wide vertical gully blocked intermittently with stones large and small. The technical difficulty of the gully was similar to the Trap Dike after abseiling the first 100 feet. One hundred and fifty feet lower, we again needed to
rappel. This time I found myself dangling in front of a 30 foot deep cave formed when larger stones blocked the gully and formed a roof—yet another cool feature. This is why I love to explore.

The rain continued to threaten as we reached our packs at 6:00 p.m. Haystack was obscured by the clouds and the approaching front turned the welcoming gorge into an ominous valley. I find it interesting how inclement weather can affect one’s perception of an area. The first hints of dusk touched the region as we began the exit bushwhack.

I knew we were in store for a ride when the wind changed as we took a rest near the Panther Den wall—and me without my raincoat. Thankfully it was warm enough that we didn’t need one. Into the krummholz we went as the clouds whipped up the gorge and wind-driven rain became heavier. We didn’t bother with headlamps though it was nearly dark. We simply wanted to collect ourselves on the Phelps Trail—a benchmark we reached a little after 7:00 pm.

The trail was running with water which slowed our progress over the next 8.5 miles. The rain eventually tapered off and the winds calmed as we reached Slant Rock and enjoyed a quick snack. We reached Johns Brook Lodge about 10:30 p.m. The winds again picked up and we enjoyed rain just shy of a downpour the rest of the way. My fleece was soaked and heavy, but warm. I joked about the rain stopping at the Garden. Yes, God has a sense of humor because the rain indeed stopped abruptly as we signed out. Dripping, but thrilled from a day of adventure we walked through the fog to my car.

Each time I’ve introduced a friend to the gorge, I’ve yelled, “Welcome to the Promised Land,” at the first viewpoint. Now there’s a route to commemorate the phrase--a second meaning for the title. The gorge has become an extension of my home. To me, it is the Promised Land... 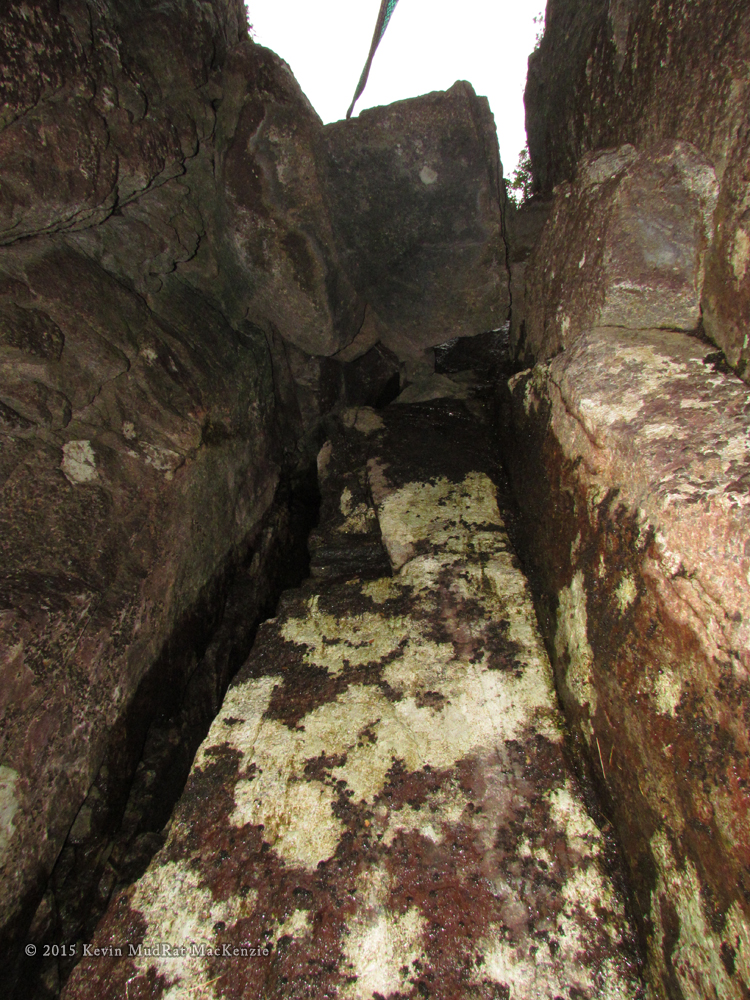 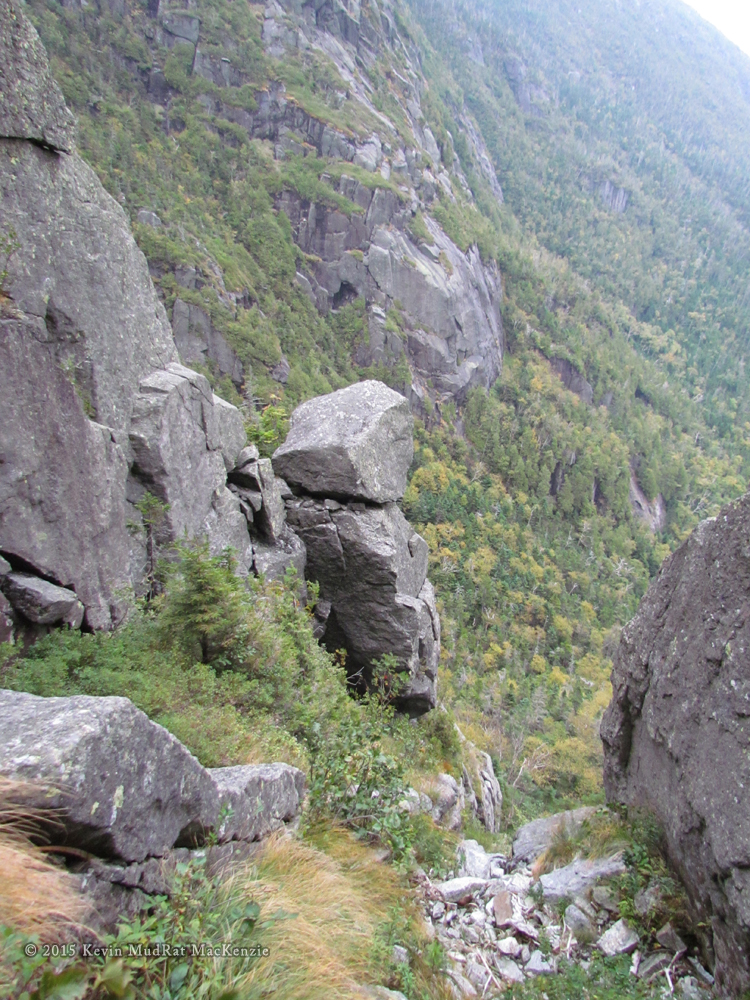 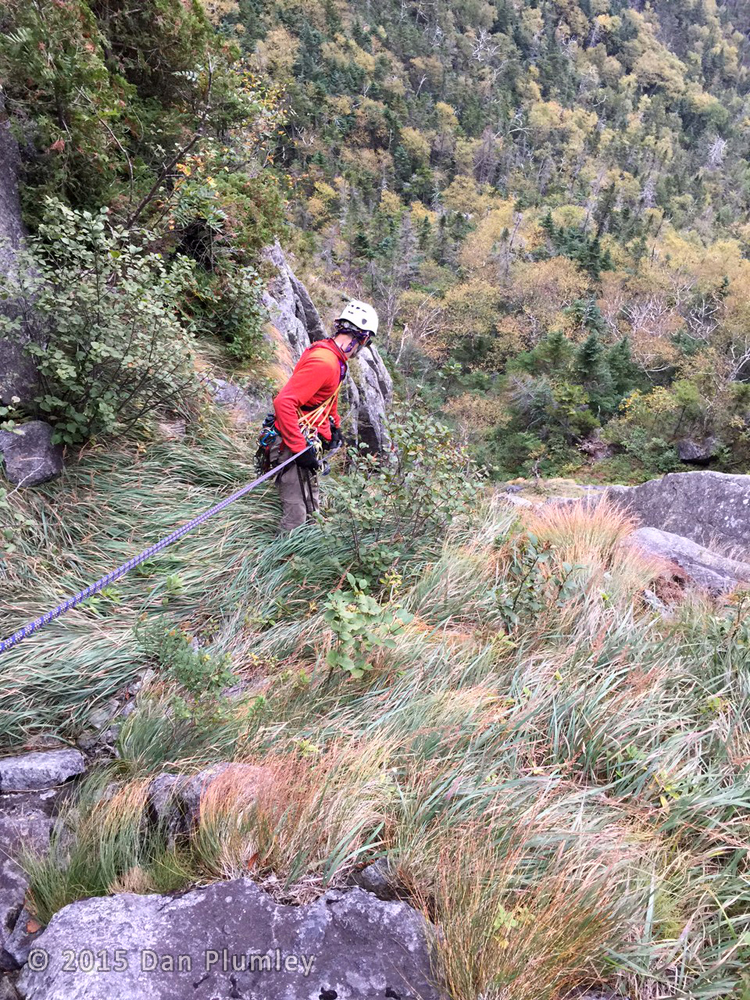 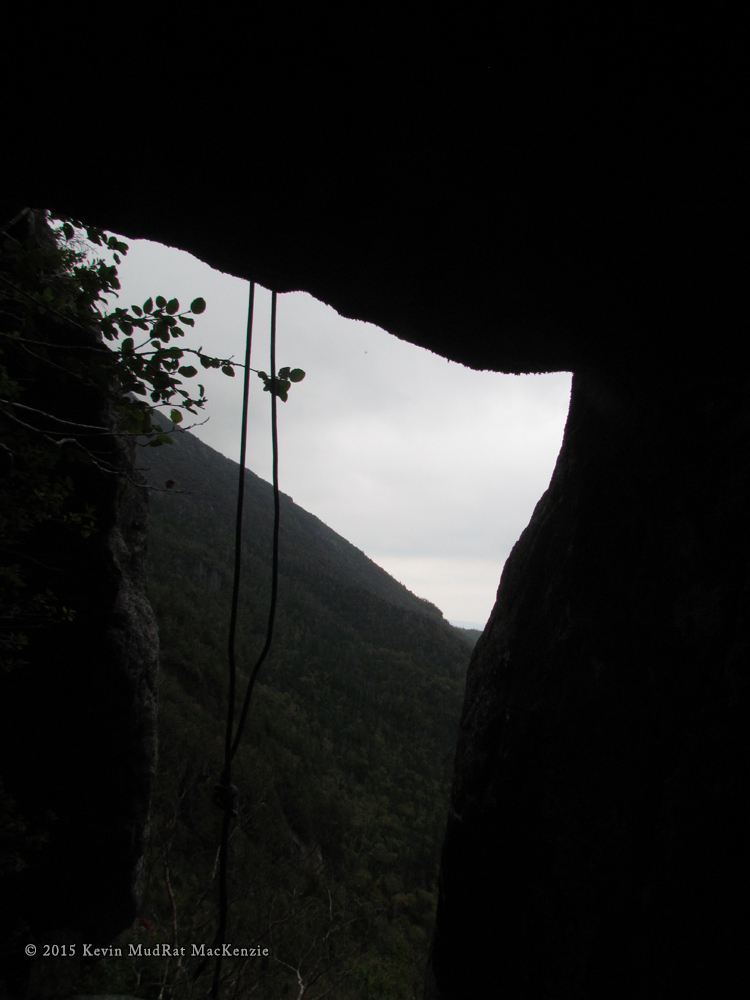