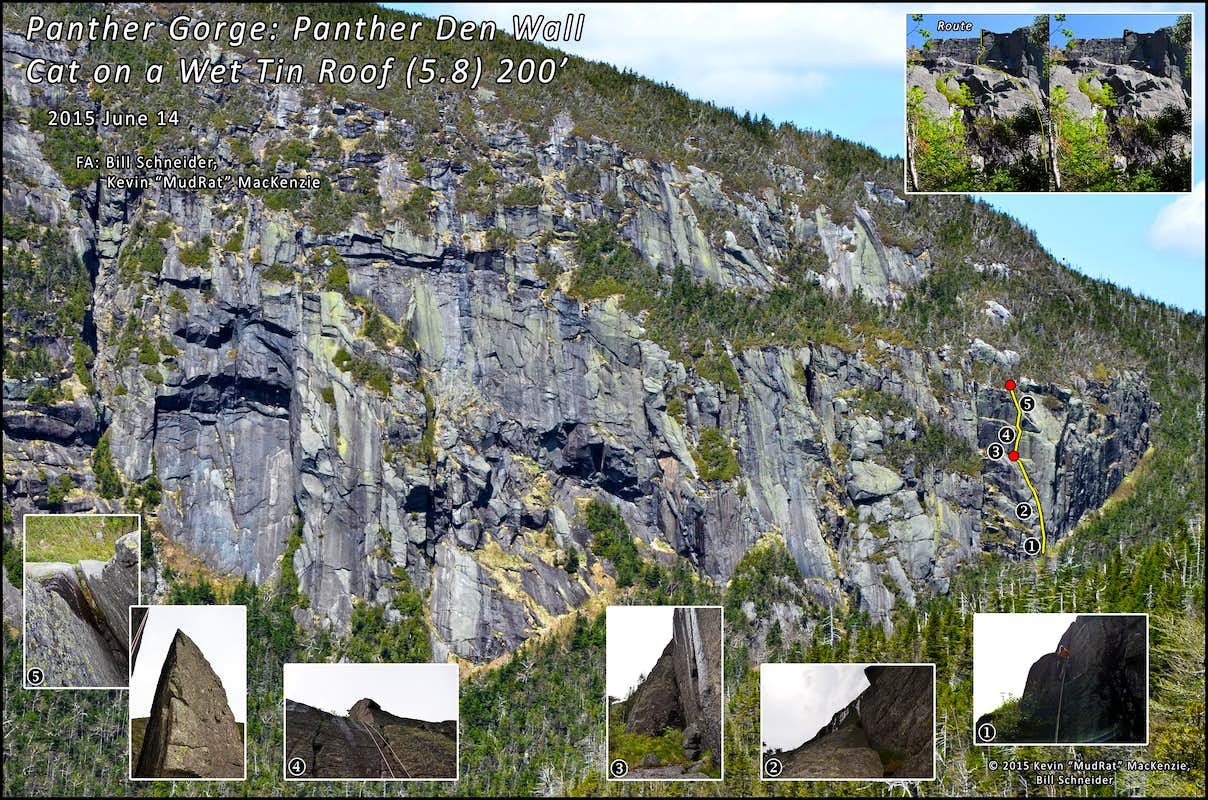 Panther Gorge, ah, the constant call in the back of my mind drew me again on June 14th.
It was only two weeks since my last visit with Adam Crofoot and Allison
Rooney, but my body felt up to the challenge. Bill Schneider, a veteran
of the area that added new rock climbing routes during 2003 and 2004
joined me--. His goal was the same—to explore the unexplored.

We hadn’t climbed together so we discussed logistics on June 6th
and decided to meet at the Rooster Comb Trailhead at 4:45 am the
following morning. We’d leave a car below and drive one up to the Garden
trailhead in case parking was at a premium.

Morning arrived all too quickly when my alarm sounded at 3:55 am.
Arghh—too early, but necessary for a day hike into the gorge. We began
the 8.5 mile walk into the gorge at 5:00 am. On approach to the
Southside Trail (which saves elevation) we heard Johns Brook and decided
to take the Northside rather than risk a dicey crossing. The trail was
muddy and wet much of the time yet our feet remained surprisingly dry.
We arrived at Slant Rock around 7:30 am and the Marcy/Haystack col at
the north end of the gorge around 8:30—right on schedule.

Exploring
The Huge Scoop,named during a trip about 3 weeks later, is a large depression to the immediate
south of the Agharta Wall far into the gorge, but before the East Face.
Close-up observation shows that it was likely formed as pieces fell away
over eons. This square depression offers roughly 200 feet of steep
technical slab (with about as much width) surrounded by vertical walls
at its top and climbers’ right. A drainage/chossy gully (probably a
dike) delineates the left-hand side from the southern crags. The scoop
was to be our first target.

We descended into the gorge via the Panther Den Wall, Feline Wall and
Agharta Wall. Sometimes silently and sometimes aloud, we talked about
the condition of the rock. Heavy rains had saturated the forest. The
faces wept and many of the cracks were wet. The sun of the previous day
hadn’t completely dried the area. This was disappointing and finding a
dry route would be challenging. It’s disappointing to expend so much
energy for nature to thwart a climb. That’s how it sometimes goes—all
can’t be perfect all the time.

Once at the scoop, we studied the lines and our hearts sank further.
Most of the obvious lines were wet. None-the-less we opted to try and
‘put up’ a route. 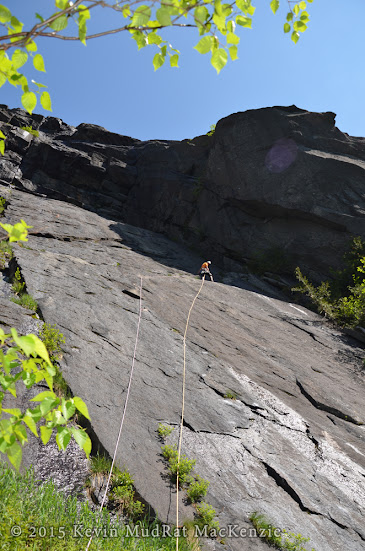 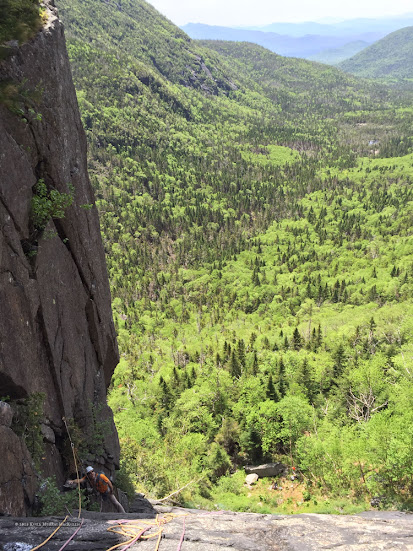 Bill climbed the slab (about 5.5 YDS) to a corner along the right side. I
have hundreds of beta photos that I’ve studied for years. Shadows
enunciated corners and suggested obvious weaknesses in the face while
other seemingly obvious lines were deceptively difficult in reality.
Bill worked his way ever upward, sometimes on wet slab—his disdain of
wet rock was obvious. I was less than thrilled with the prospects, but
we explored as much as possible. The area is a photographic
marvel—natural artistry as I often say; simply being there and climbing
the slab was a thrill.

In the end at around noon we retreated and vowed to return in a few
weeks. The day was young so we packed our gear and sought another option
to the north. I’d spied an alternative that looked dryer. Back up the
gnarled forest we marched, across talus and through the balsams.

It was around 1:30 pm when we readied ourselves for a second attempt at a
new route. The proposed line was at the lower corner of the Panther Den
Wall. Let me digress to a quick description of the Panther Den. It is
the northernmost wall on Mt. Marcy, the closest to the Phelps Trail. At
its highest point the rock is broken with large corners and cracks. It’s
not particularly tall on the north end. The wall then gets higher as
one descends south. Several established routes (many belonging to Bill)
already adorn the Panther Den.

At its southernmost point, the wall changes aspect at a corner (the same
place a herdpath descends into the woods); blocky looking tiers of slab
lead upward to a vertical wall. Somewhere in this location would be our
prospective route. On another note, I suspect (though I have no proof)
that Jim Goodwin may have brought a group of boyscouts up this area in
1936. It matches a vague description I once read. I’m even more
convinced after climbing it. Again, this comment is speculation. 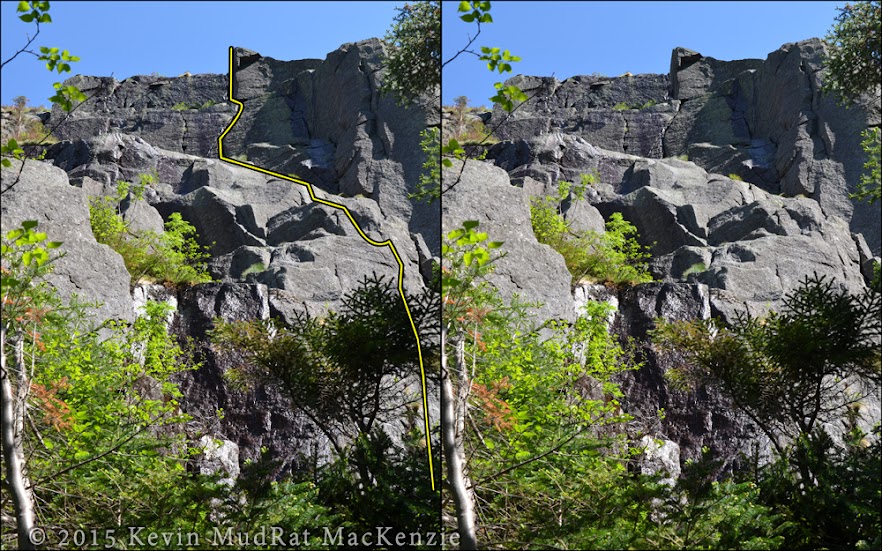 Bill offered the lead to me. I geared up and looked at the choices:
blocky terrain slightly to the south (not very challenging), a 15 foot
vertical face with no protection and a few edges or a mossy set of
blocks. I chose the vertical face that we rated at 5.7 YDS. It looked
like it had a few fun edges.

I climbed about 7 feet up and felt high above to a ledge. My hand hit a
patch of lichen and slipped. Rather than risk falling (there was no way
to protect a fall) I turned and jumped back down to our grassy ramp. I
studied it a bit further and tried again, this time finding the foot and
hand placements I needed. Once on the ledge, I placed a cam in a
vertical handcrack and climbed. It was on.

The next 135 feet of climbing was up cracks and divoted rock along the
corner of the wall. There was a gully to my right, but that wouldn’t be
challenging enough. I eventually crested a large terrace and set up an
anchor to belay Bill. Could this be where the scout leaders were
“cliffed out” in 1936?—above sat two vertical faces and unprotected
down-climbing would be challenging.

Once I belayed Bill to the terrace, we studied the wall. It was 25 feet
high with several defined cracks. One looked particularly enticing and
led up to an overhang (really a large free standing spire). I got about
10 feet up and after placing a few pieces of gear, couldn’t progress.
The reason? The crack was wet and not entirely clean. Dry, it would have
been significantly easier. Bill opted to give it a try.

Decades of experience paid dividends and he completed the climb though
it didn’t have the best options for placing gear. Above, he followed
along the corner formed by the spire and found a surprise. The second 20
foot vertical wall and spire formed a chimney climb that would end the
route in style. There was little gear near the chimney, but it was a
secure climb. He set up a belay in the krummholz above and I climbed.

I can’t say I climbed it in style, but I climbed it none-the-less. I
took time to admire the spire and chimney. Looking down through it from
its top was inspiring. The view at its end fell away to the forest
floor—very dramatic.

Our exit strategy can only be described as heinous. The krummholz was
among the thickest I’ve seen. I led the way with rope still attached (it
was easier than coiling it in a tangle of sharp limbs). We trekked
north clad in rock climbing shoes and eventually found less dense forest
as the wall of stone below lessened in height. Once free of the forest,
we walked back down the grassy slope to our packs for a quick snack.

It was around 6:00 pm when we bushwhacked back out of the gorge and to
the Phelps trail. Another 8.5 miles found us back at the trailhead with
16 hours and 50 minutes logged as the total duration. We were both
tired, but found the energy to discuss another trip into the gorge to
finish the first route—we’d make sure it was dry.

To climb in the Adirondacks it to make due with what nature doles out.
Sometimes conditions are perfect; these are the rare occasions when the
mountains are “friendly”. Other times one assesses and presses on. There
are still others one retreats to come back—to live another day. This
trip was a combination of the latter two. It was a difficult day even
for Panther Gorge, but it yielded fruit none-the-less. It’s all part of
the journey...

We put up Cat on a Wet Tin Roof. Now take a moment and visualize
what that might look like. If you can than you’ll be visualizing what we
too looked like on certain occasions!

1-Kevin leading at the top of the uprotected start,

2-View from partway up the route,

4-Top part of the 5.8 yds crack and Bill on top of the pinnacle, 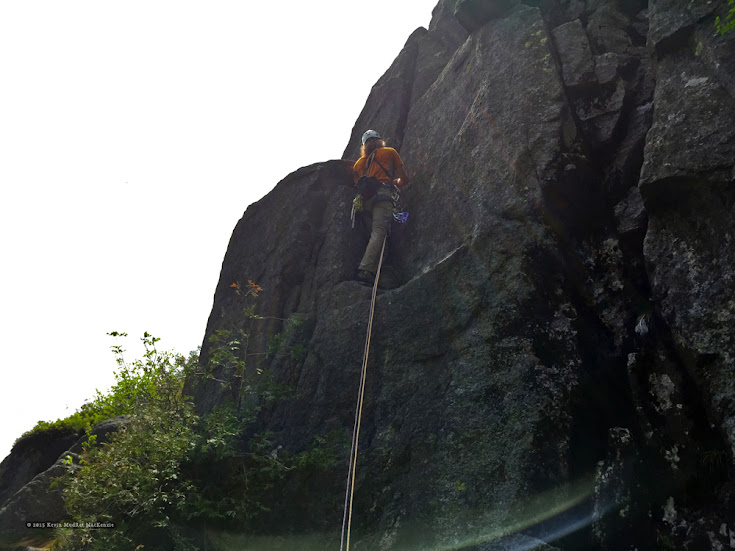 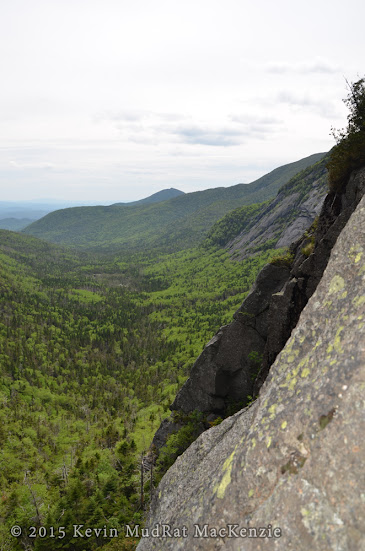 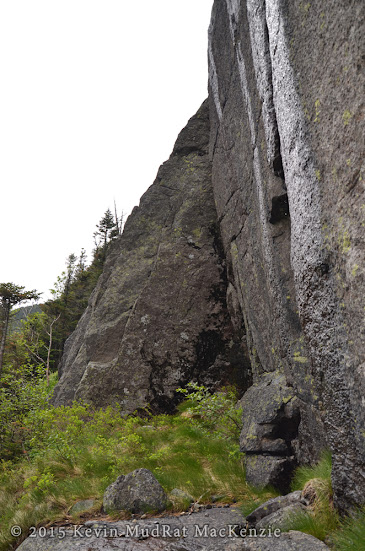 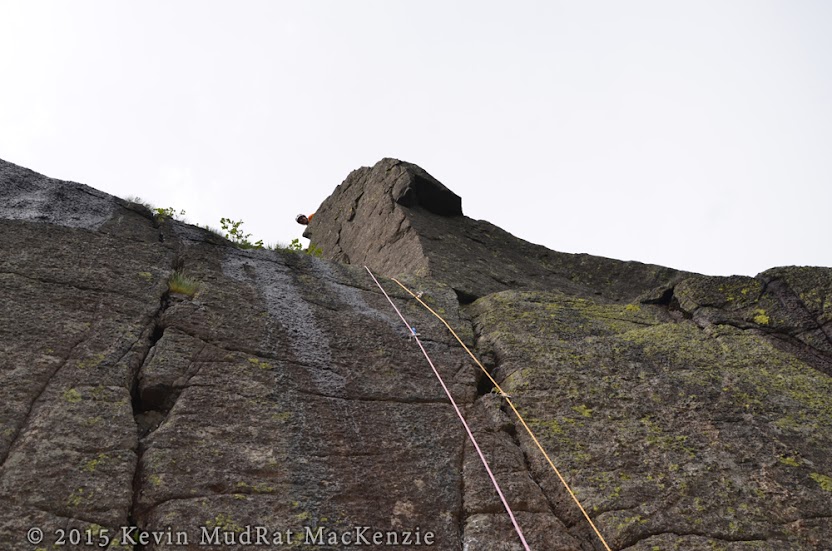 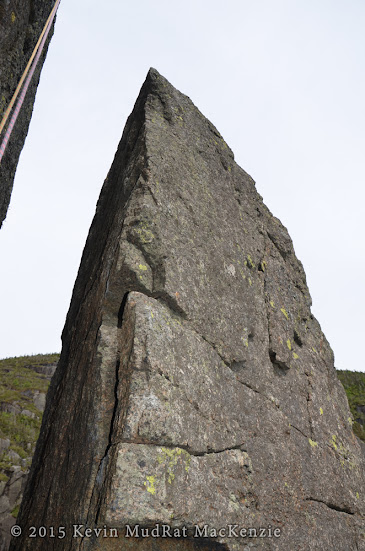