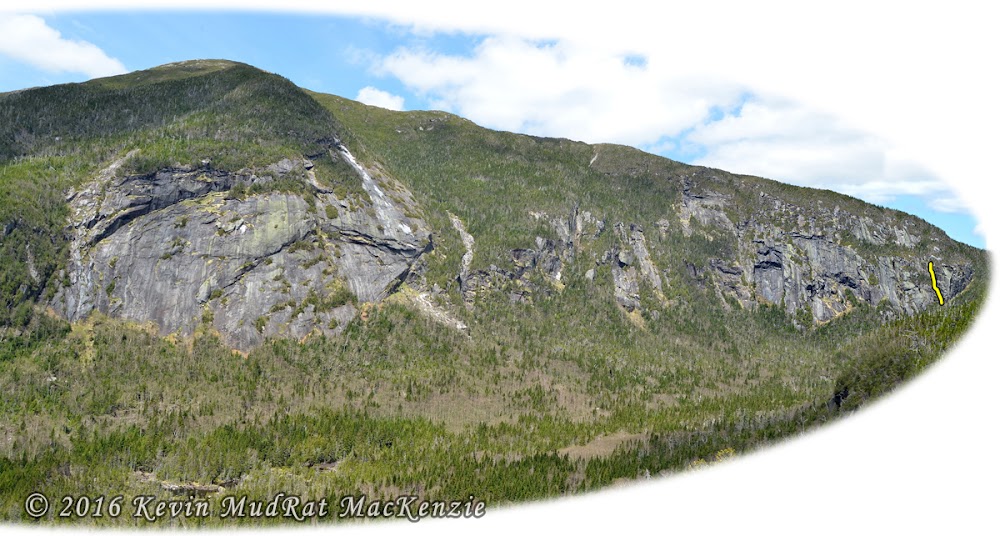 I needed my Panther Gorge fix—the last visit was in November. Warm temperatures in the valley prompted me to consider how much ice might be in the gorge. The low snowpack made it even more tempting given the 8.5 mile-long approach. Panther Gorge veteran Bill Schneider and Devin Farkas, assistant director of the Outdoor Program at St. Lawrence University, jumped on board. As usual we met at the Rooster Comb parking lot at 5:00 am to sort gear and drive a single car to the Garden. Temperatures hovered at 15F though they were forecast to rise to the mid-thirties in the valley.

I had a particularly rough start and questioned whether I’d make it to the Haystack/ Marcy col—lovely GI issues. The exertion of climbing from Slant Rock to the col seemed to sit well with my system so I walked it off though couldn’t eat or drink much. I fretted about whether the low intake of food and water would be an issue, but Clif Bloks sustained me well. Bill set the perfect pace as we discussed a variety of issue including the snowpack and necessity (or not) of snowshoes. I silently thought back on other trips into the gorge. This was my twentieth trip; would it be as successful as most of the others? Not every venture ends up with the intended goal(s) fulfilled, but even a walk in to explore is worth the effort. 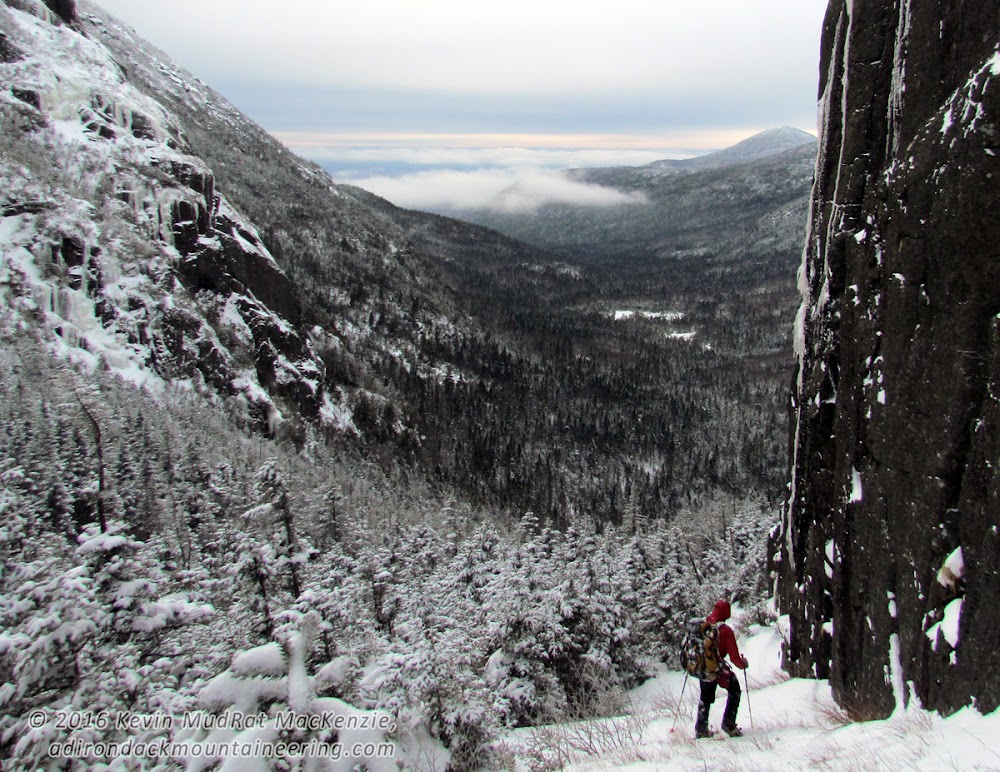 We hoped to have a firm crust on which to bushwhack from the Phelps Trail to the climbing walls. I stepped off trail will snowshoes on and sank to my knee...so much for easy. I broke trail to the Panther Den wall while dodging snow bombs from the balsams. Bill and Devin emerged soon after I crawled out of the last, particularly dense section. This was Devin’s first visit to the ‘promised land’ and he wasn’t disappointed based on his reaction.

A large right facing corner, usually wet during the summer, held ice though it was thinner than I expected. Haystack was decorated with fat ice flows from nearly every ledge. Linking them could be an interesting route for the future. We continued lower to southern end of the Panther Den wall. Continuous tiers of ice led the vertical wall that I climbed with Bill this past summer when we put up Cat on a Wet Tin Roof (5.8). Enticing as it appeared, we wanted to explore deeper in the gorge.

Bill broke trail to the Feline Wall where Devin took over. A smear still touched down though it was delaminated and thin. The line was fatter in November when Adam Crofoot, Allison Rooney and I spotted it while bushwhacking down the Haystack side. Longer days of sun on the black rock had taken a toll. A nearby gully had interesting possibilities.

We climbed up and left of the Feline Wall; Bill and Devin continued down to the Agharta Wall where the Agharta line was fat. There were no options for a new independent line so we re-ascended to the aforementioned line at the Panther Den Wall (44°6’49.4”N, 73°54’23.9”W). The approach and exploration had taken seven hours. It was 12:15 pm and time to climb. 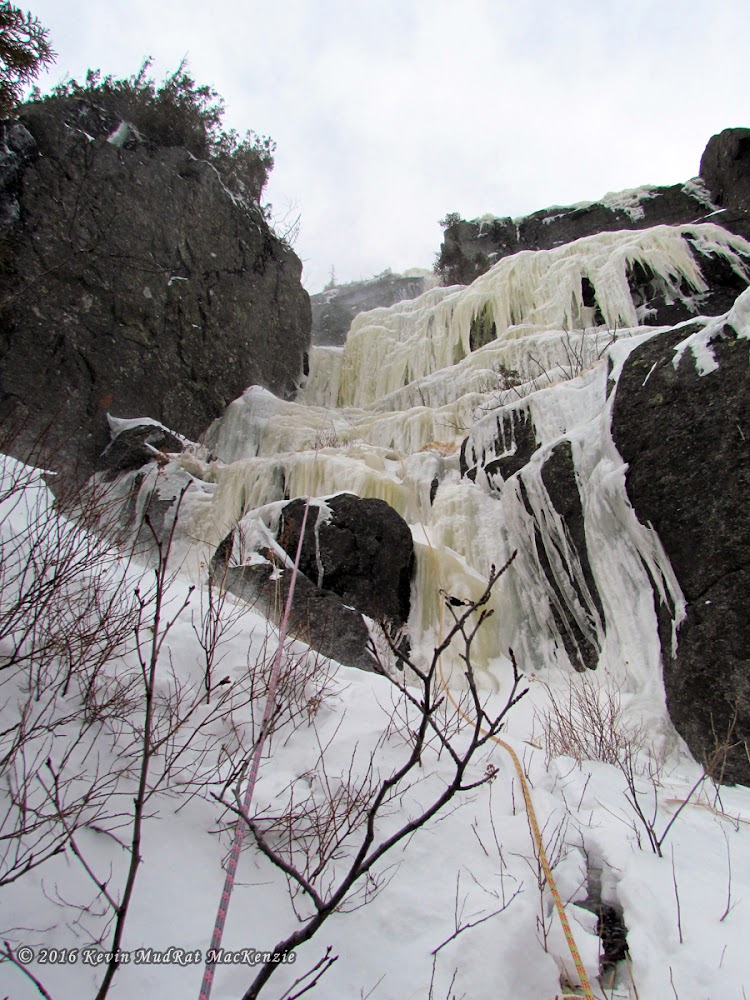 Looking up pitch 1 from a tier or two up the route.

The first strikes of Bill’s took shattered it—very dry. We’d hoped that the recent rains at lower elevations might have kept the water moving up high. Apparently it was snowfall at 4,000 feet in elevation. Moderate winds swirled the snow as Bill climbed out of sight. I considered the possibilities as he climbed—would it be more of a snow/ice mountaineering route or consistent ice? The gorge is a roll of the dice, summer or winter so I hoped this would turn out to be a good choice and go the full length. About an hour later he set up an anchor and pulled the rope up.
I started up a short vertical pitch into a narrow ice gully and up to another tier. The tiers continued to a large right facing corner. Another higher tier led to the belay station 150 feet from the base . Any concerns about the quality of the line disappeared. It was interesting, consistent and had a killer view.

Valley temperatures in the 30s Fahrenheit didn’t make it up on Marcy where the ambient temperature was probably around 20. Strong winds accompanied the ascent and dropped the wind-chill to somewhere around zero degrees. Devin followed third and we regrouped on the spacious terrace. An ice filled chimney (a mossy dripping mess in the summer) sat in a huge corner on the left side of the terrace.

Bill led again. Delicate strikes kept falling plates to a minimum. The wind strengthened and cleaned previously snow covered ledges. Smaller pieces of falling ice combined with the spindrift and took flight to the south. Devin belayed while I photographed and studied the ice flows on Little Haystack. It would be a war to get to them, but a couple could be worth the effort.
It was impossible to hear anything but Devin so three tugs signaled that it was again time to climb. A series of awkward moves led up the chimney to another terrace. A lightly iced corner led to a committing step up and left to lower angled ice below a right facing corner. Twenty more feet led into the krummholz and into a talus cave, Bill’s man-cave. He’d found a protected nook about 30 feet deep and was belaying from a pinch-point between two pieces of talus. By Tooth and Claw was up.

Two rappels later found us back at the base. Only a bushwhack out of the gorge and 8-mile walk back to the trailhead stood between a hot dinner and cup of coffee. The steep climb out of the gorge was in sync with a setting sun and still-increasing winds that whipped through the pass. The previous effort of trail-breaking paid dividends during the exit; it had consolidated into a supportive trail. Good adventures begin and end in the dark and this was no exception. We arrived back at the trailhead at 9:05 pm, 15 ¾ hours after starting—about average for day trips to the gorge. 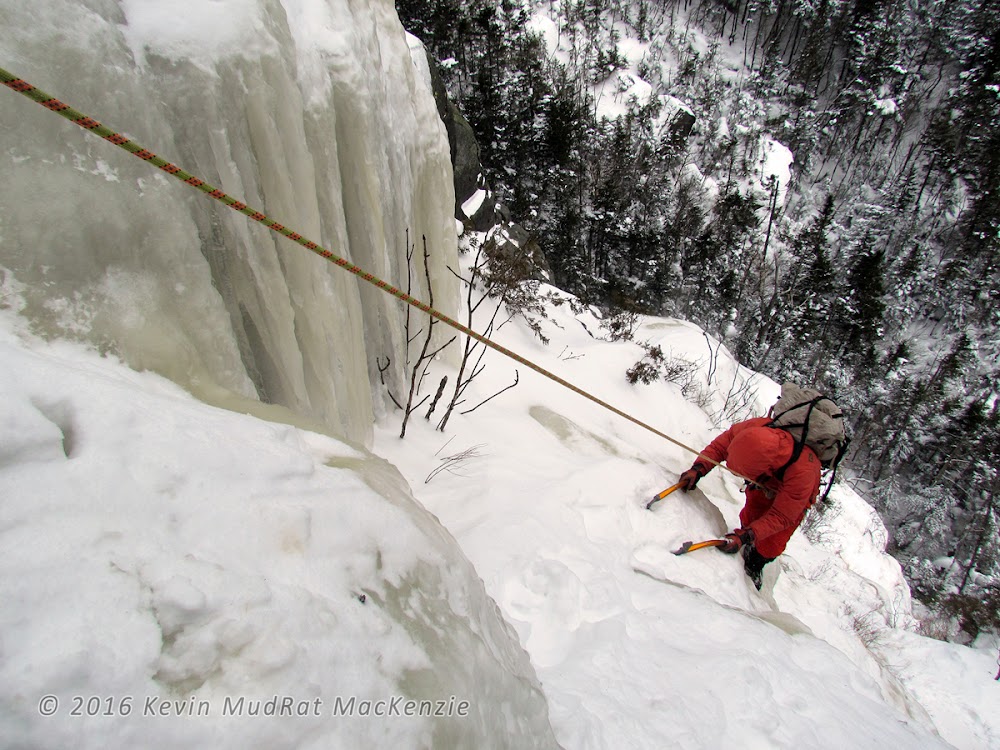 Devin following on the icy tiers of pitch 1. 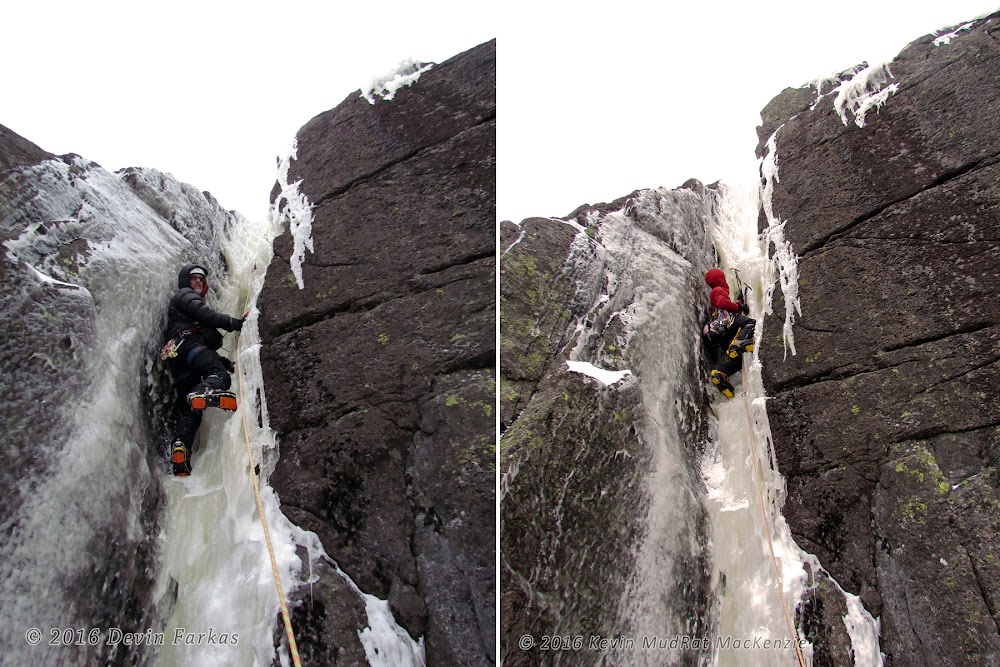 Kevin and Bill (lead climber) in the chimney about 170 feet up the route. 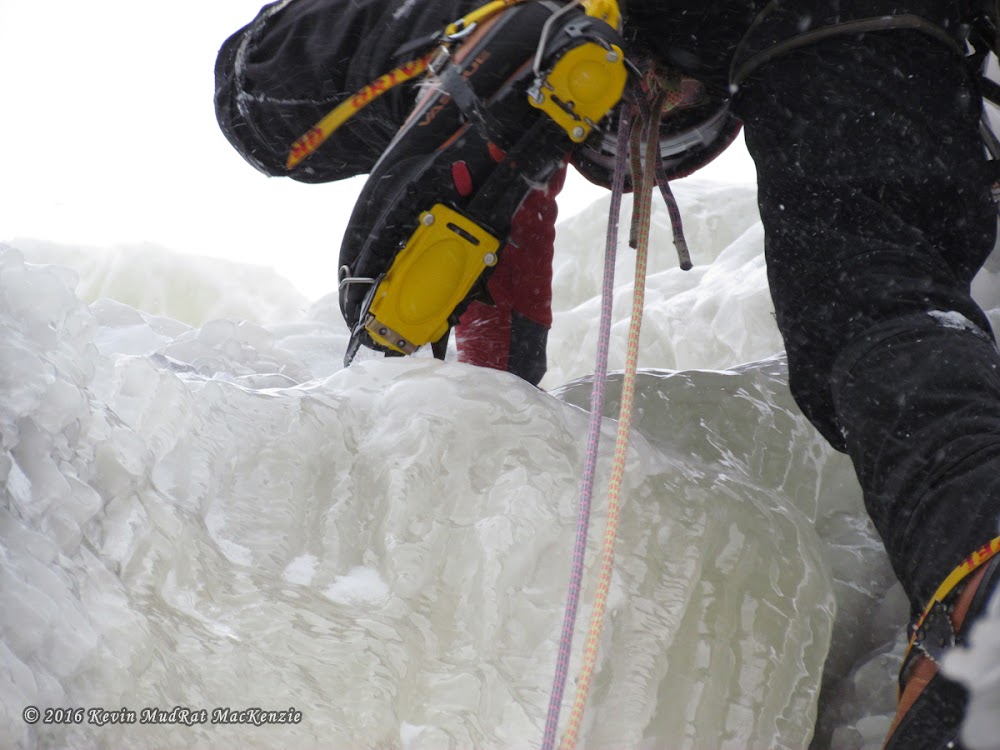 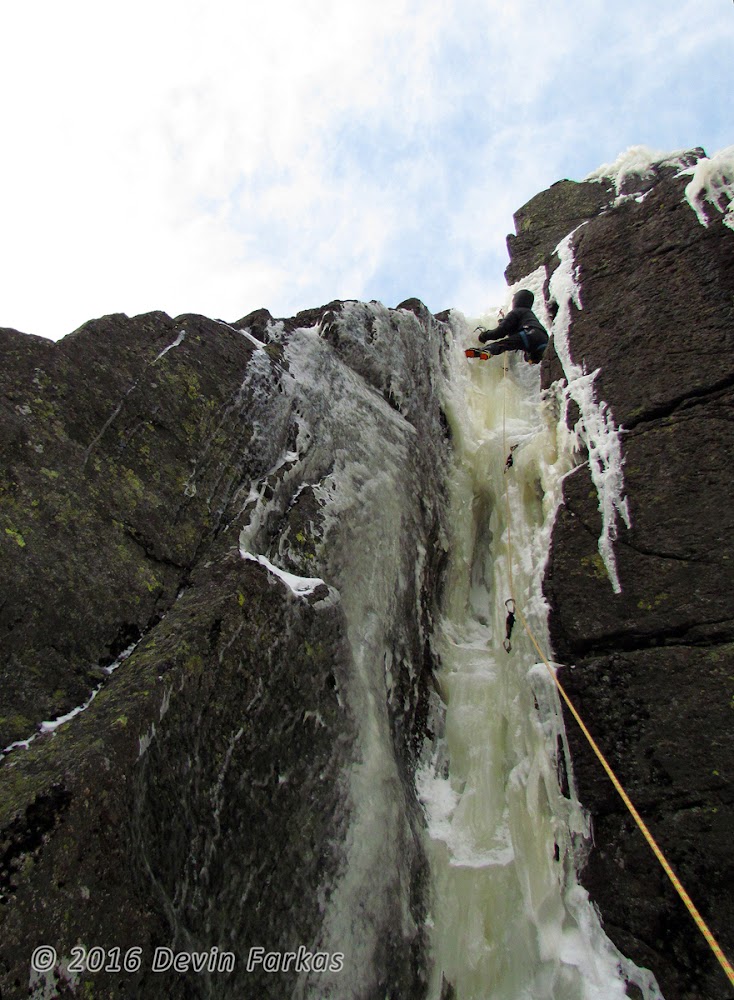 Kevin following at the crux of the route. 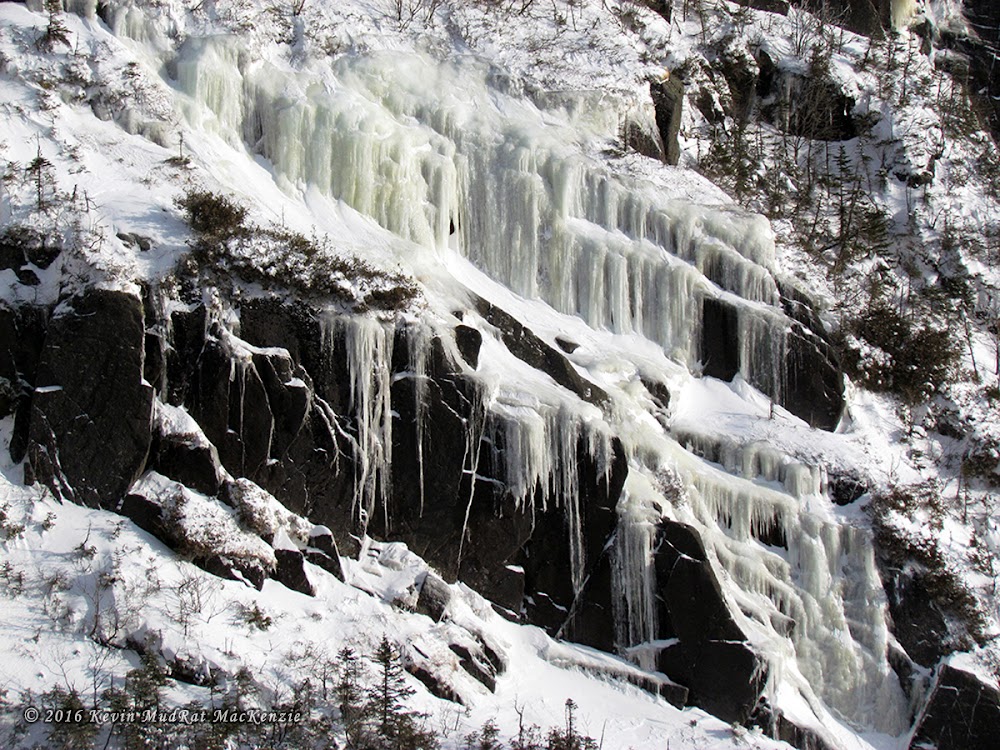 Views during the climb. 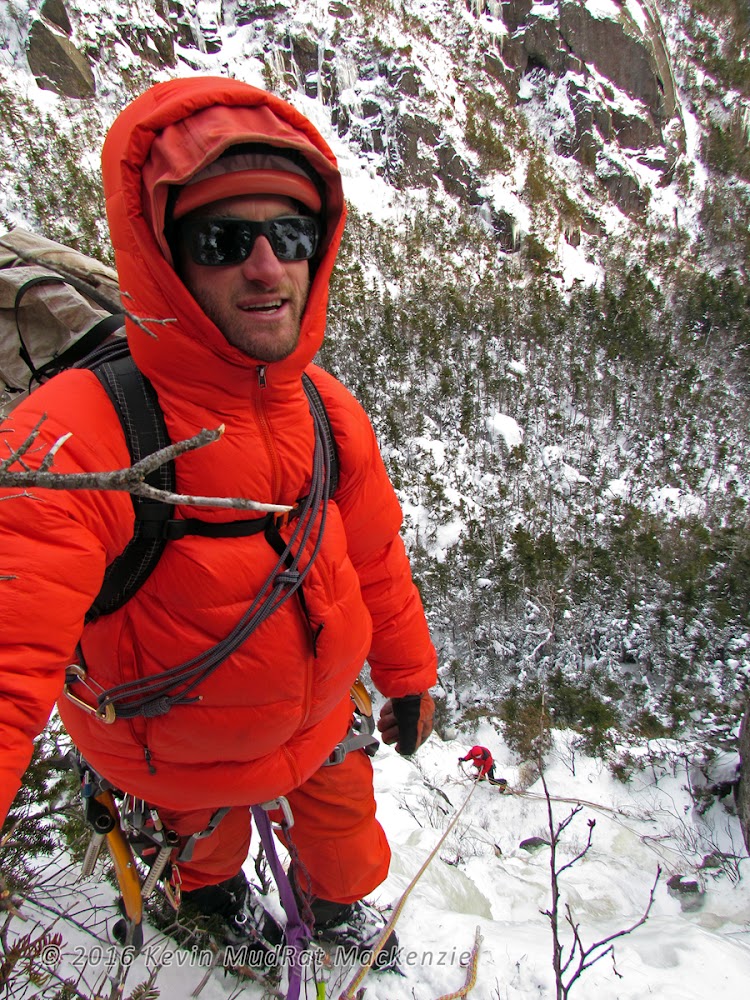