Anticipation reached a crux inside; the snow was gone and the rock was exposed. It was time to venture into Panther Gorge once again. Adam Crofoot (MaxSuffering) and Allison Rooney were my willing partners, both expert climbers and eager explore after a winter of backcountry skiing. The only participant that wasn’t totally agreeable was the weather. We’d but a small weather window to work within on Saturday, May 30th.

Adam and Allison walked in to Slant Rock Lean-to during the afternoon of Friday, May 29. I walked in later, leaving the Garden trailhead around dark which placed me at the lean-to about 11:00 pm. It was full, but I had a bivouac sack and found a comfortable place in the woods to watch the moonlit clouds blow by.

Beep, beep, beep! The imperative tone woke me at 4:45 am. We readied our gear, 140 meters of climbing rope and enough hardware to climb Half Dome. With sleepy resolve we began the trek up to the Haystack/Marcy col at 5:30 am. It became interesting in short order. The bushwhack is tight through stiff-branched trees during the descent to the Panther Den Wall on Mount Marcy. I led the way and heard an explicative followed by crunching sounds. A branch had whipped from Allison’s shoulder and punctured Adam’s eyelid irritating his eye.

We inspected it with concern, but he was resolved to press on with blurry vision and a tearing red eye—yes, he’s tough! The gorge was socked in. Clouds blew up from below shifting the trees to and fro. Rather than descend deep into the gorge we sought dry stone on the Haystack side. Adam and I had spotted a wall the previous year. It was about 80 feet high with an obvious left rising ramp. Henceforth, we referred to this as the Ramp Wall. 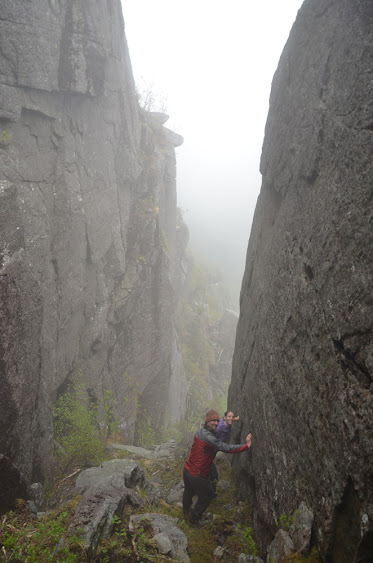 Behind the Ramp Wall

Several cracks and interesting possibilities existed on the front. It was also separated from Haystack by a 15 foot wide corridor up which we climbed to explore the top before committing to a route. Looking out the corridor felt like looking out of a tall tomb into a dreadful fog that obscured the view of the gorge. After consultation Allison decided to lead the first route.

She chose a line up a face with horizontal scores slightly uphill from the lower right-hand corner of the ramp. Everything looks easier from below and the route was more challenging than it suggested. Forty feet higher, she entered a wide slot between opposing corners and disappeared onto the ramp. After scrambling a few feet downhill she climbed a right rising crack and belayed me to her position. Adam followed. Whilst managing the rope Allison managed to punch me in a region that’s best left unpublished (there’s a point to revealing this).

Adam continued the lead up a blocky corner holding himself in position by stemming, a position where the legs brace wide to either side. Following another crack he found the top and belayed from a huge boulder. We followed. There was no view, but we put up our first route of the day, “All Battered Boyfriends” rated at 5.7 on the Yosemite Decimal System. Lest anyone take offense at the name, it was derived from the flailing limb that pierced Adam’s eyelid and the light punch I received. 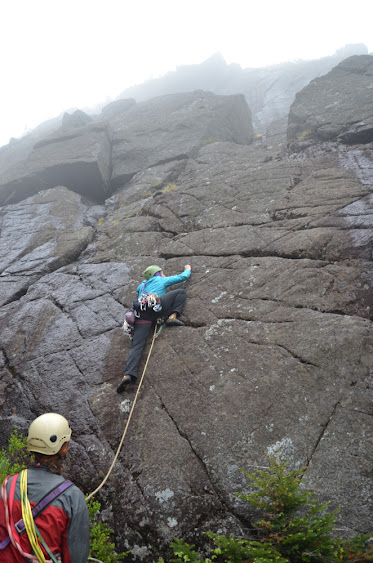 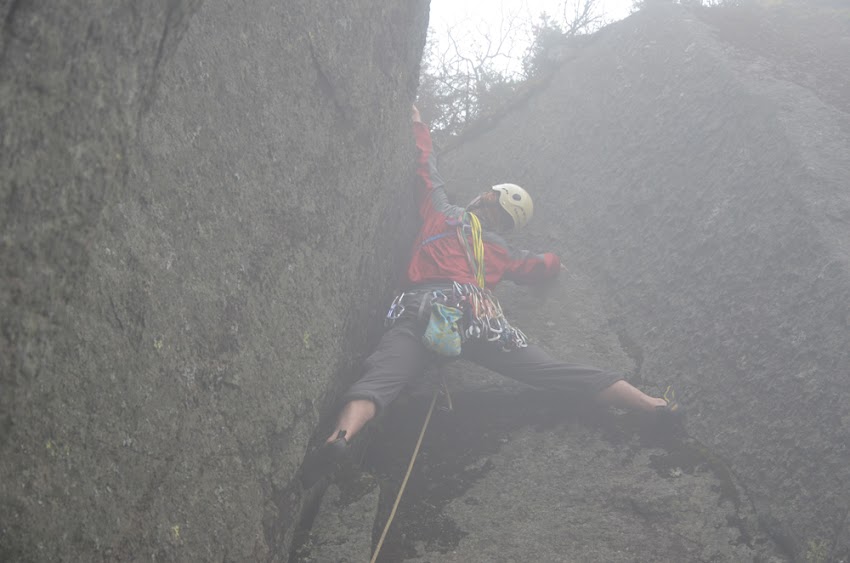 Our next route was about 50 feet uphill on the same wall. The line began along a grungy left facing corner below the upper end of the ramp. An appealing lightning bolt shaped finger crack drew Adam’s attention. He chose to lead even with a red tearing eye. Loose blocks and, a closer inspection of the crack, changed the direction of his ascent. The crack was shallow and moss filled, but the adjacent face offered an easy climb up to a small ledge. The final few moves involved climbing a wet corner with various cracks to an annoying moss cornice. He set up an anchor and lowered from stronger trees above. The route became “Less Than Zero” rated at 5.5. It deserved less than zero rating stars, but hey, it was still a fun route. 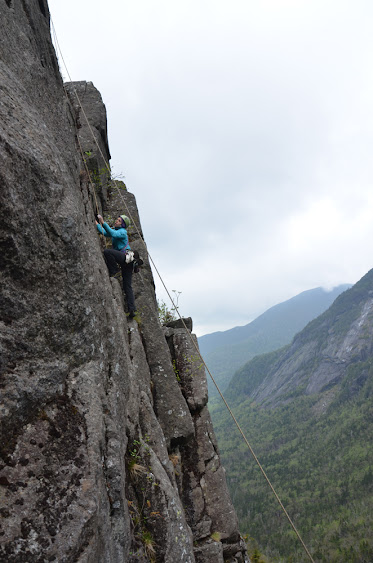 Allison on Less than Zero after Adam's lead.

Adam’s eye worsened as the morning wore on, he was done leading and I wasn’t in the right “headspace” to attempt a lead. The clouds had lifted and we eyed a final cliff about 100 feet north beyond a small drainage. Allison was up to one more lead; this would become the gem of our new routes.

An appealing wall of flaking yet anchored stone with various cracks high above on its southern wall dictated the line. She led up a fist-wide crack in a square block to a right facing corner. Small loose looking blocks led ever upward to two small pillars. I belayed and watched her disappear before climbing a deep vertical crack about 80 feet above. I climbed next then Adam. The route was called Eye for an Eye rated at 5.8 YDS. 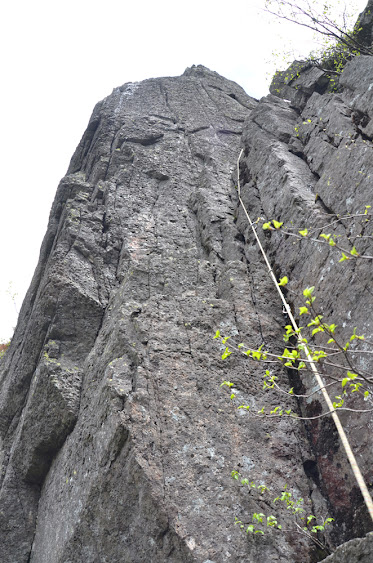 Crux pitch (about halfway up) of Eye for an Eye.

The sun finally came out and revealed a spectacular view as the sun intermittently lit the various walls on Mount Marcy. This is what climbing in Panther Gorge is all about; new routes, rough terrain exuding a deep sense of wilderness and interpersonal camaraderie...not to mention a certain amount of blood and pain.

We moved into the mouth of the gorge and reclimbed a route up a pillar that Adam and I added last year—For Whom the Lichen Tolls (5.9), undoubtedly the best documented route currently on Mount Haystack. Allison led and Adam and I climbed in turn while the forecast thunderstorms began to build. The wind was stronger, sprinkles dotted my sunglasses and the temperature dropped. It was time to retreat. 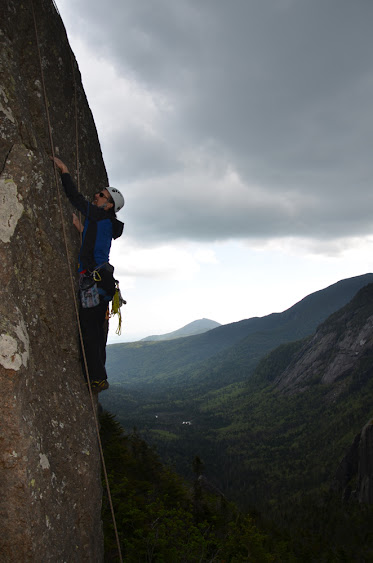 A MudRat on a rope after Allison's lead of For Whom the Lichen Tolls (5.9). Below, Adam and Allison on the same. 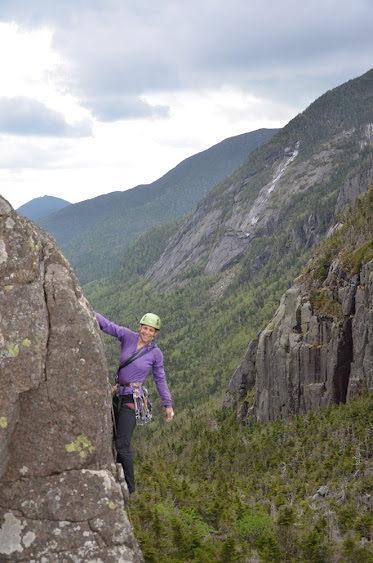 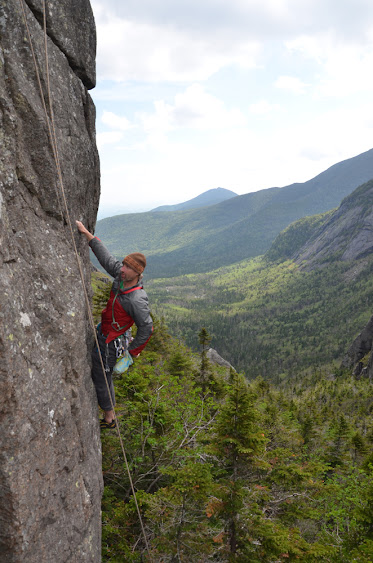 At this point, one might think the adventure was over, yes? Heck, no!

We bushwhacked out of the gorge avoiding a few deep pockets of snow (I couldn’t resist lobbing a snowball at Allison). Adam commented that he would laugh if we got back to the lean-to and it started to immediately rain. In truth we expected to be rappelling in a downpour and were prepared. To our delight that didn’t happen, but Adam’s comment was prophetic. No sooner did we arrive at Slant Rock Lean-to at about 6:00 pm and it began to rain, softly at first then harder.

Flash Flood at Johns Brook
A strong storm blew over the region shortly after the rain began. Trees bend, lightening illuminated the skies and the rain blew sideways. We witnessed nature’s power in relative comfort with a hot dinner in hand from our sleeping bags. We committed our new routes to paper as the storm blazed. Two nice gentlemen from Canada also shared the lean-to.

No sooner had the weather relented than a trail runner came up from the trail to the lean-to. He was merely dressed in a pair of spandex, short sleeved shirt and thin rain poncho with a camelback. He was trapped above treeline on Mount Haystack during the storm’s fury. He asked where a good crossing was since Johns Brook was running high. All along I thought the roaring was only the wind!

We walked down from the lean-to wide-eyed with disbelief. Small rivulets near the lean-to were swollen and the normally dry trail next to Slant Rock was a foot deep. Johns Brook is normally ankle deep at the crossing; it had risen four feet and turned into an impassable torrent. The runner, Richard, was shivering and temperatures were supposed to plummet to the upper 30’s Fahrenheit so we loaned him clothing and suggested that he spend the night with us in the lean-to.

Storm after storm passed by during the evening. Cracks of thunder occasionally shook me from my light sleep. I think each of us checked on Richard at least once to see if he was ok. At 6:00 am he awoke and checked the brook; it was down enough for him to exit. Rain continued until late morning when we exited in a light yet miserable drizzle.

Johns Brook was roughly thigh deep and the trail ran like a mountain stream for miles to the next crossing at Bushnell Falls. The brook was about three times as wide with a greater volume. Strong waist-deep currents made the crossing spicy, but it remained safe though we watched each other closely while fording the brook.

I arrived home around 3:00 pm and soon found out tragic news. While we enjoyed the fury of the storm on the 30th and considered it yet another part of a wonderful adventure, a woman lost her life in Feldspar Brook on the other side of the mountain. The thought continues to leave me unnerved when I think back upon our juxtaposed situations.

The Adirondacks mountains are a place of unparalleled beauty full of adventure though nature is a powerful force in any season. Many of us in the community feel the loss of our fellow hiker, may she rest in peace.