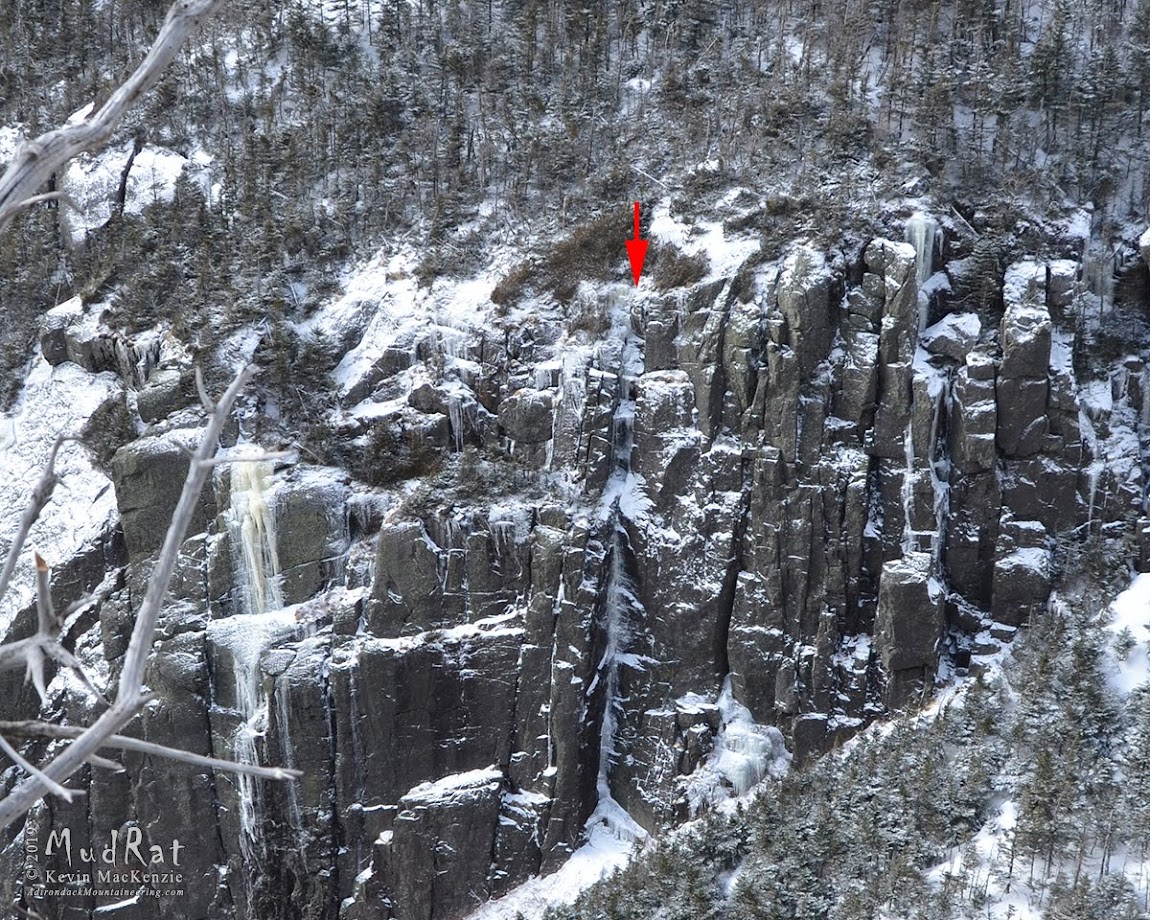 Adam Crofoot and I walked by an ice line on the Panther Den in December of 2014; the first obvious corner on this cliff of Mt. Marcy. In the summer, it drips continually so I refer to it at “the always wet corner.” The ice line has been on my radar since that time and I’d taken photos of it every year trying to figure out the best time to go after it. It overhangs slightly at the crux and boasts a deep, wide crack in the corner. It’s been in unclimbable conditions on at least three attempts; either too thin or a cascade. Since it’s such a stout line, I needed it to be in good condition (or my skills to increase).

Brent and Laura were due to arrive the evening of December 27th, a visit that was planned months ahead of time. Adirondack weather is so unpredictable, that I hesitate to plan that far ahead. We held fast and caught the backside of a warm spell with rain. We met at 4:15 a.m. at the Garden on the morning of Dec. 28. Brent weighed the packs at their car—45 pounds each give or take.

There was a light drizzle overnight, but the rains ended and we began walking a light mist. It was a humid approach and mitigating the moisture was troublesome as I found my pace. A bony trail of ice and frozen mud slowed us; Laura and I put on crampons after Hogback Brook. Brent prevailed by just bare booting.

Large trees intermittently blocked the trail between Bushnell Lean-to #2 and Basin Brook. There were enough to slow the approach and add an additional core routine to the approach. We got our exercise. The snow increased and we donned snowshoes somewhere above Slant Rock. The snowpack was lean, but contained an annoying mix of granular snow with a couple weak crust layers. Gravity aided us as we bushwhacked into the Gorge. By the time we arrived at the Panther Den, we’d been walking for 6 hours—longer than usual, but the bony trail, blow down, slowing pace to control sweat, and breaks added up. This is why I always start so early, to deal with the unforeseen.

I originally had it in mind to survey the climbing options on the Panther Den, then look at lines farther south. Those thoughts evaporated when I felt how warm it was and saw the state of the cliffs. The hot sun under a cloudless, cobolt-blue sky was beating the Marcy lines. Smears were falling off as they melted. The primary option I had in mind, however, started in a huge corner that sees no sun whatsoever in late December. Only its top, a fat flow, was mildly melting and making the lower pitch drippy. 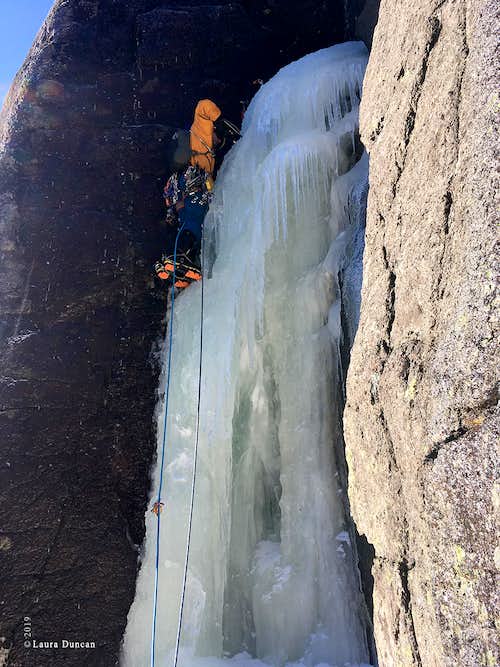 Kevin atop the initial pillar.

We walked to the base of the Den’s snowfield to have a quick glance at around small ice chips fell down. Helmets weren’t an option, but necessity even along the glade. We flaked the ropes and readied ourselves back at the “always wet corner.” A fat pillar formed the bottom 20’. This seemed straightforward. An offwidth crack, wider at the base, was partly occluded by the pillar, but could be seen immediately above. It appeared that a curtain may have covered most of it before the rain set it, but this was partially melted out leaving a few ice bridges and blobs on ledges. Above sat a 16” wide icicle that was melted out on the right side.

It took a group effort to figure out the gear during the ascent. The top clearly overhung once I stood atop the pillar. Getting to it was a challenge with the melted out middle in a somewhat fragile state. Screws and pick strikes shattered some of the ice. Small ice bridges, however, seemed solid and could be slung as protection. The crux icicle looked less intimidating directly below it; Brent noticed a 3” cam placement behind it and I found some small gear to the side including a terrier (small spectre) with a dubious placement.

A couple big moves with one pick in a 1/8” wide crack and another behind a small ice bridge and front-points in a thin veneer of ice on the wall set me on an even stance with the crux. More big moves, one with a tool in the icicle surmounted the crux. Using the left foot to stem on rocky edges on the left wall was key. A steep flow lead into a cave where I collected myself and belayed Laura. 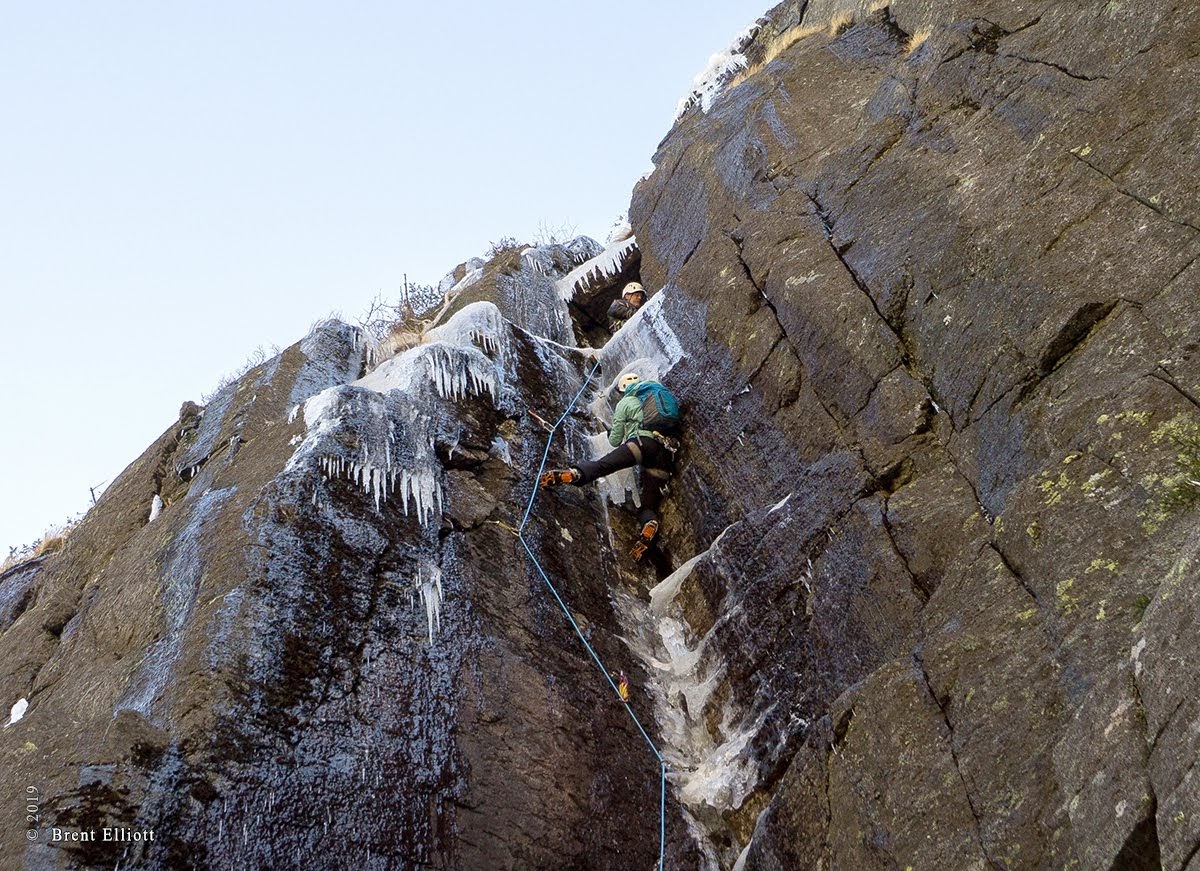 Kevin belaying Laura at the crux.

This was a unique feature complete with a partially formed curtain of ice. It was about 6’ wide and 3’ deep with several options for rock (small to 2” cams). The back wall was iced with a 2” thick flow of bubbly ice with suspended flakes of moss.

I didn’t know the scale or how we’d surmount this from below, but it became more obvious upon closer inspection. It was a confined space requiring some comical gymnastics to maneuver around each other during the belay. Brent led out of the cave using a pick-torque in a horizontal until he could plant an axe in the flow above. Various body parts, crampons, and gear neared my face as he stemmed out and disappeared. We affectionately dubbed the cubby “Brent’s ballroom” for reasons that I’ll describe no further. Meanwhile Laura and I huddle together under a dripping edge that increased in flow when a screw above released water that was running under the ice up above.

Laura climbed next which left me alone to contemplate my thoughts and enjoy the scenery, warm weather, and the way the sun played on Haystack. The bangs of ice cracking ceased as the sun lowered. It was nearing 4:00 p.m. as we finished the route. I only had to climb the fat flow of blue ice to my smiling friends in the forest above. It seemed like it had taken only moments, but it had taken over five hours to figure out the route, gear, etc. 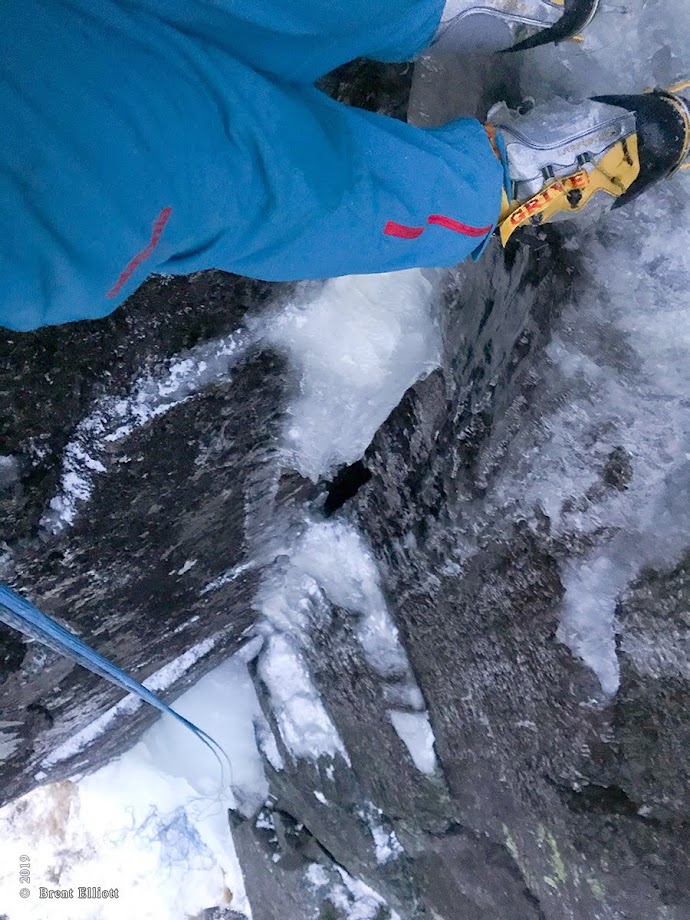 The rappel took only a few minutes and we packed under a fading sky with a deep feeling of satisfaction from another good day in the Gorge. Upon reflection, I realized that the line was better than I’d originally dreamed; the features, diversity, and challenge. I was equally thrilled to finally put a route up in December in Panther Gorge. This has eluded me until this trip. These days are difficult to describe, and words fail to capture the reality.

As usual, we tossed route names back and forth over the ensuing hours of the exit. Laura quickly noted that we could fall back to the Greek theme we’d established a couple years earlier when putting up Scylla and Charybdis. Since there were three of us and this route was a bit of a beast, she asked if there were any three-headed monsters in mythology. Cerberus came to mind. Climbing this seemed slightly akin to Waking Cerberus. A grade of WI5/M4 seemed appropriate for the conditions we found. The thin/bad ice in its center, strenuous gear placements, and overhanging section certainly jumped it from WI4+. If I had to guess, I believe this might form as a 4+ in full-curtain conditions.

The entire walk out was in the dark as expected. Navigating the blowdown was annoying…also as expected. We looked forward to taking a warm break at Johns Brook Lodge since it was open and had a wood stove. It was 11:10 p.m. when we arrived at the Garden. Was an 18.5 hour day worth a 120’ climb? There’s not even a question: yes. It’s not just a climb, but an experience. 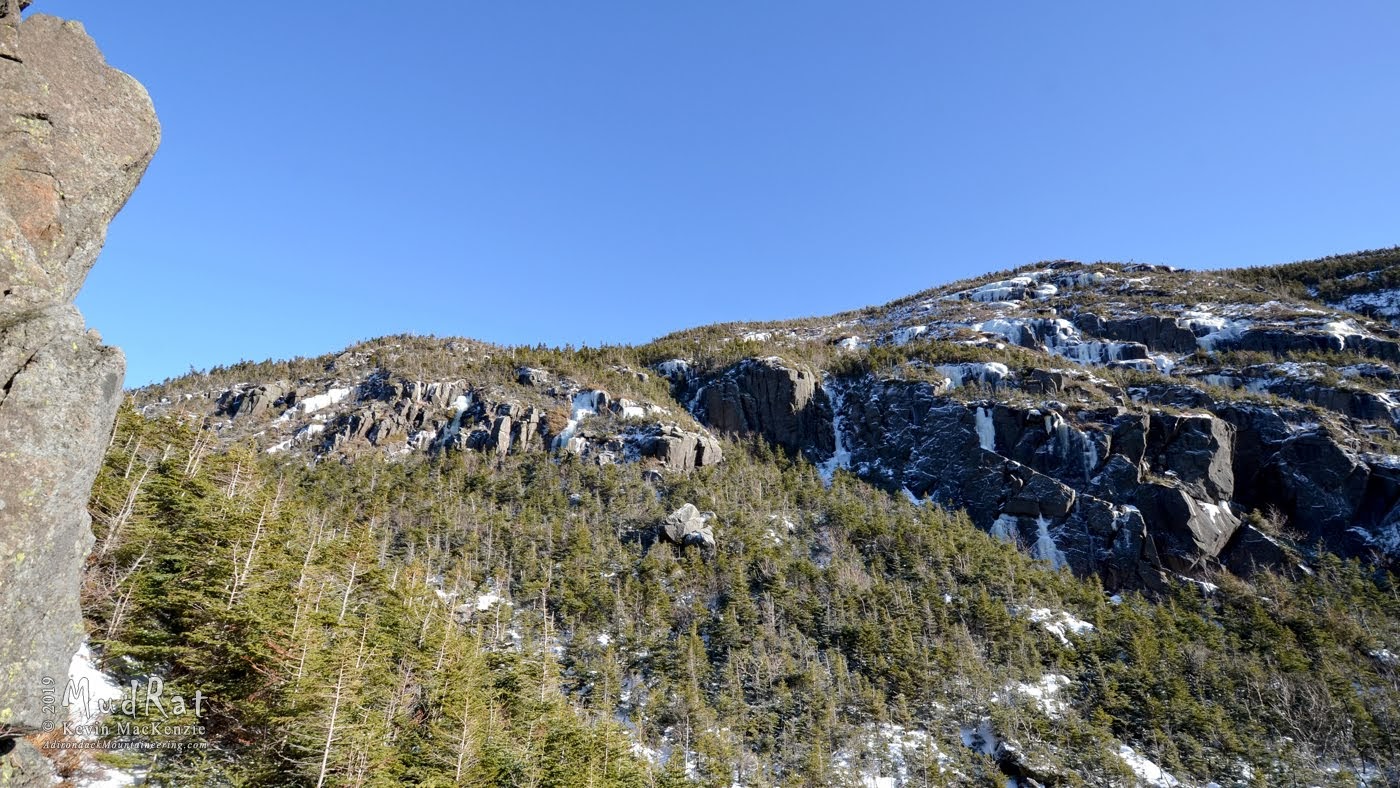 Haystack Routes, above. Brent, Laura and the Rat, below. 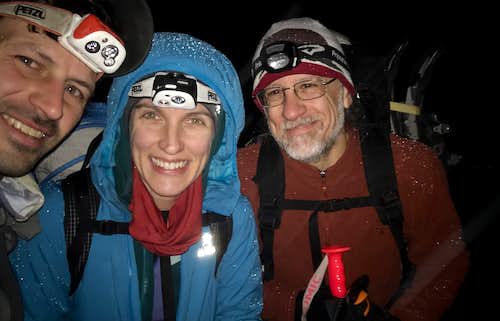