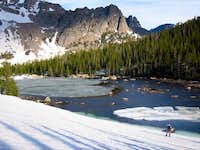 Not having met the devil, I don't know if the Devil's Backbone, a rock formation near Loveland, Colorado, is well-named. One might guess the thoughts of French fur trappers who named the Grand Teton, a fine name for a fine mountain, but one with little resemblance to its namesake if you ask me.

By comparison, this modest peak in the heart of Rocky Mountain National Park, when viewed from the right angle near Odessa Lake, does remind one of the famous Zermatt profile.

According to the book High Country Names by Arps and Kingery, the name Little Matterhorn was coined by either Dr. W. J. Workman, or Frank Byerly, owners of a Lodge that operated at Fern Lake before the region became a National Park. In 1914 Byerly sent a series of hand-colored stereoscopic pictures to Washington as part of the effort to lobby Congress to create the proposed Estes National Park. One of the slides was of the Little Matterhorn taken from Odessa Lake. (Odessa was Workman's daughter).

A climb of the Little Matterhorn is a memorable event. Reaching its summit ridge is easy enough class 2-3 scrambling, but the final approach to the highest point involves a few delicate and exposed moves. This is provided that poor route-finding does not steer you onto even more difficult ground. I speak from experience. See the Southwest Face route description for more details.

I have not been able to find any information about a first ascent. 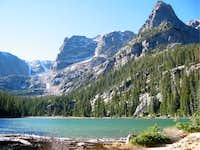 There are two options for approaching the Little Matterhorn:

The first, from the Bear Lake Trailhead (9.475') is shorter, and the likely day-trip approach. This is one of the main roads in the Park. Take your first left turn after the Beaver Meadows entrance and follow the road to the end.

Begin your hike from Bear Lake by bearing right (north) on to the Flattop Mountain / Bierstadt Lake trail. After a half-mile turn left onto the Flattop / Lake Helene trail, and continue straight on to Lake Helene. As you near the lake you will see the dramatic form of Notchtop Mountain ahead of you. It is about 3 miles from Bear Lake to Lake Helene (10,600'), where the trail makes a sharp turn to the right (north) and begins descending to Odessa Lake. Here the Little Matterhorn is almost directly to your west. From this vantage, it looks like a ridge coming off Knobtop Mountain, which is in fact what it is, and not at all like the Matterhorn. Leave the main trail and descend about 300, keeping Grace Falls to your left. The steep north face of Notchtop, laced with waterfalls towers above you. These falls form ice climbing pillars in winter.

The second, longer option, from the Fern Lake trailhead, allows you to see how the mountain got its name. This is reached by turning right off the Bear Lake Road at Moraine Park, and following this road about 3 miles to its end. The small parking lot fills early in the summer, and the road is closed one mile from the trailhead in winter. The Park bus shuttle system will also take you here in summer. This approach is more suitable for an overnight trip.

From the trailhead hike along the Big Thompson River for two lovely, nearly level miles to The Pool. Bear right at the trail junction and continue, now steadily climbing, to Fern and Odessa Lakes. It as about 5 miles to Odessa, which sits at 10,000'. At various vantage points along this hike you'll catches glimpses of the Little Matterhorn, and you will think it is a good name. At Odessa Lake, it towers 1,500 feet above you in dramatic fashion.

From Odessa you can continue on the trail towards Lake Helene, as noted above, or you can bushwack alongside Fern Creek, eventually arriving in the basin near Grace Falls. The latter option saves a 400-foot ascent and descent, but it is bushwhacking through downed timber and willows.

The peak is within Rocky Mountain National Park, and all Park regulations apply. The Park's web site will have current rate information.

There are daily as well as annual Park passes. The annual pass is the only way to go for anyone living near the Park. But since you are out climbing and will be entering the Park at an absurdly early hour, there will probably be no one there to collect your money.

Please note that no dogs are permitted on any trail in RMNP, leashed or otherwise.

Little Matterhorn is typically climbed from late spring through early fall (June-October). Skiing or snowshoeing to its base in winter makes for a great outing, but navigating the icy summit ridge would require appropriate skill and equipment. 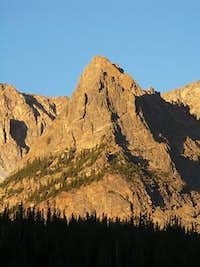 There is a backcountry site called Sourdough near Lake Helene. It is located in forest far from water and with no views of the nearby beauty. Forest camps are fine, but if you are surrounded by mountains you'd prefer to see them from camp, I think. (I'll confess to deciding upon a better location near lake Helene once I saw where they had put this site).

A better option is the site at Odessa Lake. Approaching the mountain from this direction is a beautiful hike from ponderosa pine, up into spruce and fir forests, along streams, waterfalls, and lakes. In June you might spot the uncommon Calypso Lady Slipper, an orchid native to the Park. I have also seen the beautiful Western Tanager during spring migration along this trail. After camping at Odessa you can continue out to Bear Lake. By using a car shuttle, or the Park bus system, this makes for a one-way walk with no backtracking. Highly recommended, in spite of the summer crowds.

Here is the link to RMNP backcountry camping information.

As with any Front Range climb, the summer season (may - September) is highlighted by towering thunderstorms that form in early afternoon. You generally want to be off the summit by noon. Plan accordingly and the additional benefits are that besides getting into the Park for free, you'll get a spot in the parking lot.

I was coming off the Little Matterhorn once around noon (an unsuccessful attempt when we got off route), and there was a huge storm forming to the north by the Mummy Range. We watched lightning strike the ground near Lumpy Ridge and later learned that one of those bolts killed a hiker on the Cow Creek trail. Colorado lightning storms are to be taken seriously. Check out my trip report for a personal lightning experience.

The Front Range is also known for ferocious wind, especially in winter.

Estes Park forecast, the gateway town on the east side of RMNP.

Weather charts data from the Niwot Ridge Meteorological site, located at 3528m (11,572 ft) on Niwot Ridge, some 30 miles south of RMNP. This gives you an indication of recent regional high altitude conditions.