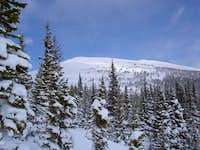 Meadow Mountain is the northernmost and easternmost named peak in the Indian Peaks Wilderness and is on the southern border of Rocky Mountain National Park. Meadow is relatively low in elevation and has easy access in most seasons. The alpine summit is accessible by a moderate hike and makes a great tourist destination in the summer. Low avalanche danger, low elevation, and good access make it a good winter destination as well.

The summit itself is an unremarkable expanse of tundra and stones but the view... the view is superb and is well-worth the modest hiking commitment! Meadow Mountain marks the east end of the ridge dividing the spectacular Wild Basin (RMNP) to the north from the Saint Vrain drainage to the south. Most notable are the vistas of the >Longs Peak Massif to the north, Ogallala and Saint Vrain to the west, and the higher Indian Peaks summits to the south. Far away you'll be able to spot Pike's Peak on a clear day. The foothills drop away to the east and the Great Plains stretch to the horizon... or at least the smog layer hanging over the eastern part of the state.

***The Mt Saint Vrain trailhead is closed until the end of September 2009 by Boulder Parks due to a wildlife habitat issue. The Rock Creek trailhead is open.***


Meadow Mountain is easily accessed from the Mount Saint Vrain trailhead (8900') near Allenspark. Allenspark is 3 miles west of the junction of the Peak to Peak Highway (CO72) and the road from Lyons up Saint Vrain Canyon (CO7). From Estes Park, Allenspark is 15 miles south on CO-7. From Lyons, follow CO-7 18 miles west. 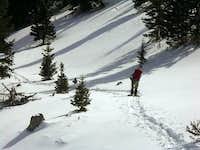 Once in Allenspark, follow Business-7 parallel to CO-7. Then locate either Ski Road or CR107. Both roads are good-quality dirt and merge after less than a mile. Continue south to a Y-junction. In winter, the road may be impassible past this point and limitted parking is available at the intersection. Conditions permitting, take the right branch (up hill) and continue another half mile to the signed trail head.

Follow the obvious trail through pleasant woods. Eventually, the trail passes through a series of switchbacks in a steep meadow. The steepest portion of these slopes reaches 30-degrees and may feature slight avalanche danger in winter. At the top of the steep bowl, the trail continues in dense evergreens before emerging on the gentle slopes below the saddle between Meadow and UN11479. From the saddle, turn north (right) and ascend an easy half mile on talus to the broad summit.

The last mile is above tree line and is frequently windy. The last half mile is off-trail climbing over easy talus. Total round-trip distance is 6.7 miles from the TH, 7.7 from the Y-intersection (winter trailhead).

"Most notable are the vistas of the Pike's Peak on a clear day." Wouldn't the most notable views be those of Longs Peak?