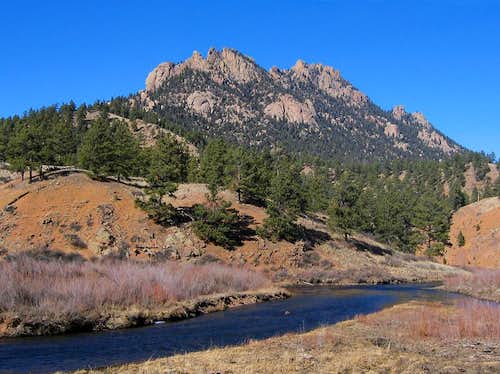 Long Scraggy Peak is perhaps most commonly known as a stunning backdrop to a day of fly-fishing on the South Platte River. The area is popular among anglers and off-road vehicle enthusiasts, but it has a lot to offer to hikers and rock climbers alike. This impressive mountain, in the heart of the craggy region near the confluence of the North and South Forks of the South Platte, provides a nice tromp in the winter months when the higher peaks have turned you away. Despite its rugged looks, the peak's easiest route is Class 2+.

Long Scraggy is Jefferson County's second most prominent peak (Green Mountain is the first), and with this prominence comes spectacular views of the Lost Creek Wilderness, Mount Evans Wilderness, the forks of the South Platte River, the Rampart Range, and the surrounding South Platte crags like Cathedral Spires and Raleigh Peak. Your sublime perch also provides views south to the Douglas County highpoint Thunder Butte and beyond to Pikes Peak. Long Scraggy shares a heritage with its protected brethren to the west in the Lost Creek Wilderness because it is composed of the same Pikes Peak granite for which the Tarryall Mountains and parts of the Kenosha Mountains are known. Grippy, pink Pikes granite erodes into shapes of all kinds, from the bubbly to the phantasmagorical, and offers fun scrambling and climbing opportunities wherever you find it. An interesting geology note: Pikes granite is bar-none the youngest granitic rock in all of the Rocky Mountains, Canadian or otherwise. To find the nearest exposed granite of a similar age, you'd have to go to the Adirondacks in New York.

Forest lands north of Long Scraggy fell victim to the Buffalo Creek Fire of 1996. Although the forest immediately surrounding the peak was spared, in order to protect nearby residences, cutting zones of thinned trees, fire lines, and piles of cut brush are ever-present. Consequently, you don't escape the feel of man's presence until you're on the peak itself. Despite all this, be glad that man didn't disturb the area in a much more profound manner. Had fishermen and environmentalists not prevailed in the fight against the Two Forks Dam during the 1980s and early '90s, Long Scraggy's surroundings to the east, including much of this scene featured below, would be underwater! 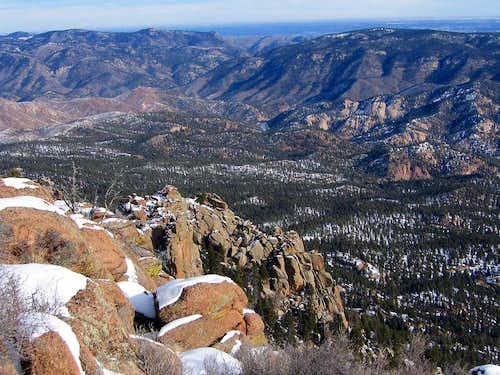 Long Scraggy Peak is most easily reached from US-285 near the town of Pine Junction, seven miles southwest of Conifer. Turn south on Jefferson County Road 126 (this junction is signed, telling you to turn south for the towns of Pine Grove, Buffalo Creek, and Deckers), and drive about 11.8 miles, passing Pine Grove and Buffalo Creek along the way. There are two viable parking spots for Long Scraggy. The first is at the beginning of Forest Service Road 538. This road, also known as the Top of the World Road, has been permanently closed since the Buffalo Creek Fire, and it is gated at its junction with CR-126. There is limited parking available to the left of the gate. Do not park directly in front of the gate, as it is posted as a "No Parking" area! The other parking is 0.8 miles south past the first, at the county road's intersection with the Colorado Trail. This alternate parking area adds about a half-mile of hiking to the trip each way. If you're coming from the town of Deckers, the Top of the World Road parking spot is about 13 miles from the intersection of CR-126 and SH-67.

Private property is abundant near Long Scraggy Peak, but otherwise, there are no red tape issues, as the peak itself is located in an unprotected area of Pike National Forest.

With its modest elevation, Long Scraggy Peak can be climbed year-round.

Long Scraggy Peak is typically done as a day-hike, but camping is permitted in Pike National Forest. The Top of the World Campground is closed, but there are reasonable spots to camp near Long Scraggy Peak.

The US Forest Service is your best bet for determining current snow conditions and gathering other such information. The South Platte Ranger District (303-275-5610) of Pikes National Forest is responsible for the foothills surrounding Deckers.

Tried the route described as the "West Face", but got stopped by vertical cliffs and lots of exposure near the top. Tough to see where anything is in the dense unburned forest. Maybe this route works for some people, but it didn't for me.