Mt. Chocorua is one of the most climbed and photographed mountains in the White mountains of New Hampshire. In the warmer months it's a relatively short hike to the dramatic treeless summit. In the winter it's a good day in the woods with a brief taste of winter climbing in the White mountains above the treeline. The peak is very popular and you will meet people even in the dead of winter.

Legend has it that the peak was named after a local Indian Chief who died on its peak. His son died while in the care of a settler named Campbell. In vengence, Chocorua killed Campbell's family and was chased to the top of the peak by local settlers, where he fell (or leapt) to his death. 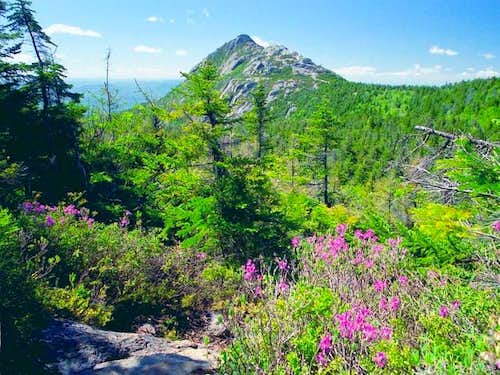 The summit cone consists of bare rock slabs.  The steeper trails make some people nervous even on a dry summer day, and require great caution when icy.  In a few spots foot-holds were blasted into the rock with dynamite.

Chocorua is located about 12 km west as the crow flies from Conway, NH.  It's considered a part of the Sandwich Range. 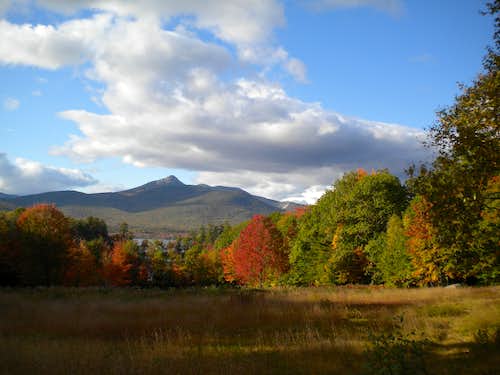 Mount Chocorua
From Boston, take interstate 95 north until Portsmouth NH, then take route 16 north.  (Route 16 has been much enlarged in recent years, and is now a highway for much of the distance.)

The most popular trailhead (Piper Trail) is directly off of Rt. 16 behind the Chocorua Store.

The Champney Falls trail off of the Kancamaugus Highway is also popular.
Both of those are plowed in winter, though not always promptly.

Chocorua is blessed with a multiplicity of trails, allowing for lots of loops and traverses of various length and difficulty.
Check the map. 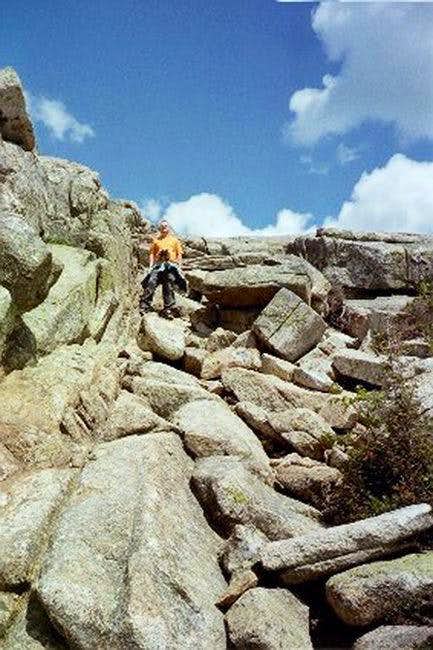 A steep rocky downclimb from...
Two trailheads on the eastern side are popular and convenient:

The Nickerson Ledge trail connects the Carter Ledge Trail to the Piper Trail, allowing you to make a loop without walking along the road.

To the north (and a bit west), the Champney Falls trail offers access from the Kancamaugus highway (a.k.a. Route 112).  This is probably the gentlest, least challenging route, but the trail does pass by Champney Falls and its sibling Pitcher Falls, which is a fun stop on a hot summer day (or a short but vertical ice climb in winter).
To the south, after following some very small roads from route 113A, you can find the Liberty trailhead which leads to the Liberty and Brook trails.
Finally, the Bee Line trail allows you to reach the summit from the West, starting in the middle of nowhere.  (Trails connect eventually to the Liberty and Champney trailheads, and to a complex of trails around the Ferncroft trailhead which serves Mt Passaconaway.)

No permits are required for hiking, and the parking situation was much improved in 2001 when The Trust for Public Lands purchased land that was previously just outside the National Forest, and created a large parking area at the Piper trailhead.  Parking at National Forest trailheads usually requires a parking fee, see the White Mountains Links page for details. 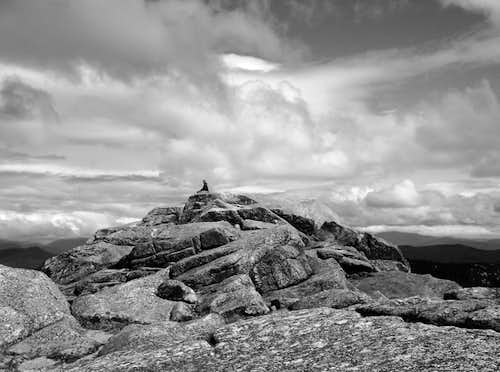 On top of Mt. Chocorua

The mountain is climbed year round. In the winter you will usually need crampons to navigate the summit block safely, and often on the ledge trails as well.  (Sometimes aggressive snowshoes will 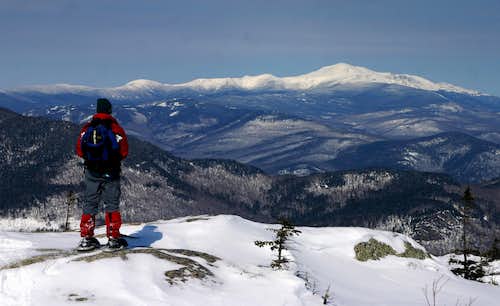 hiking on Middle Sister of Chocorua
suffice, but keep in mind there is lots of exposure.) Ice begins forming on the summit in mid-November. Even in the summer the weather can change drastically once you cross the treeline.
Here's a weather forecast that does NOT include adjustments for altitude.  Expect weather a few degrees colder and considerably windier than predicted. 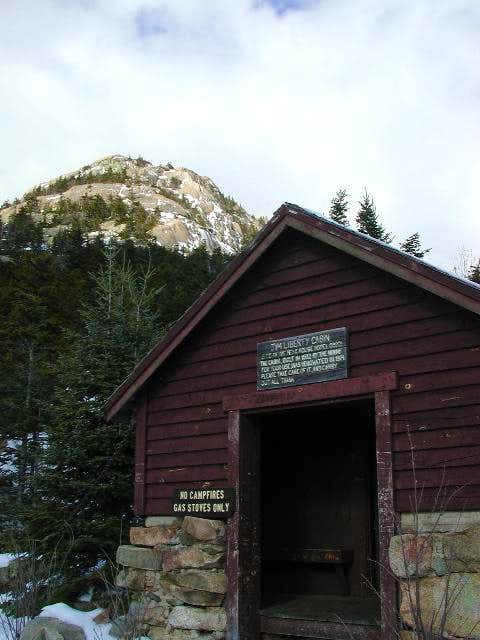 The Liberty Hut with the peak...
Camping is allowed on National Forest Land in the area below the treeline and outside a "forest protection zone" around the peak itself.
Most maps do not show the Forest Protection Area (which is a subset of the Mt Chocorua Scenic Area), but here's one that does:  Wonalancet Outdoor Club trail map
There is an unmaintained hut (the Jim Liberty Hut) half a mile south of the peak on the Liberty Trail, at around 2800 feet elevation.
There is a lean-to and a small tent platform (Camp Penacook) on a spur off the Piper trail, at around 2600 feet elevation.