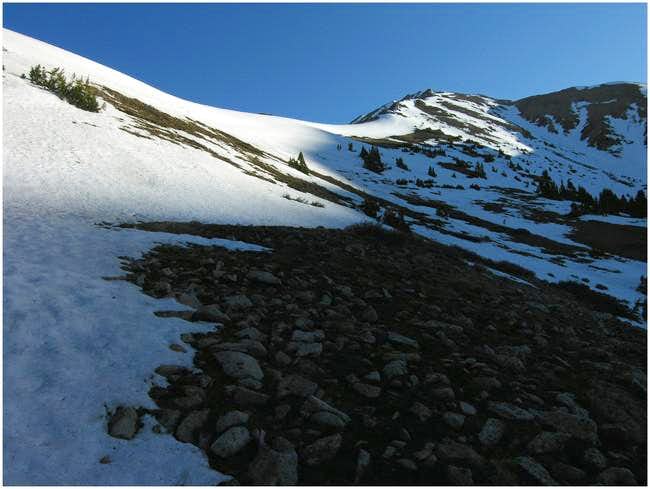 Grey Copper Creek Basin-Sawatch Range
Colorado’s fourteeners have long been the fundamental and worthy choice for list tickers and peak baggers. These high summits are usually the more prominent mountains in Colorado and with their number unofficially at 54; they present a weighted and significant wish list for anyone with transportation and strong legs. In addition, today’s fourteener guidebooks (Roach’s and Dawson’s) are well written, which makes planning and execution much safer, faster and efficient. So, who was the first climber to summit all of Colorado’s fourteener’s?

In 1920, while relaxing on the summit of Mount Eolus, William Ervin and Carl Blaurock began counting the fourteeners they had completed and quickly promised one another to finish the list. Three years later, Blaurock and Ervin, who were frequent climbing partners, completed climbs of the 46 peaks that were then thought to be above 14,000 feet. Because of new surveys, the figure is now considered to be 54.

Carl Blaurock’s extensive climbing career began in1909 and spanned over 60 years, undoubtedly the longest and most active in Colorado history. In addition to the fourteeners, Blaurock in particular was noted for his extensive climbing exploits that included many first ascents, not only in Colorado, but in the Tetons of Wyoming and elsewhere.
As of 2004, not a single mountain in Colorado honored the great names of Blaurock or Ervin. The mountaineering consensus believed the two climbers deserved to be honored for their accomplishments. After all, climbing mountains 80 years ago was much more difficult than today and being the first to complete such a list was quite an accomplishment. However, attaching historic names to an unnamed mountain proved to be more difficult than anyone expected.

What’s in a name? In its criteria for naming of geographic features, the U.S. Board of Geographic Names calls for compelling evidence of overwhelming local support. Locating that support can be a tough job. A messier situation occurs when the peak resides within a wilderness boundary. When naming wilderness geography, one must convince the board with a compelling safety, educational or administrative reason as well as finding that local support. For example, rescue personnel must testify that having a peak named would aid them in their work.

Forbes had his eye on a few different scenarios but ultimately put together a plan for a pair of peaks southwest of Leadville, on the ridge between La Plata Peak and Mount Hope. The higher, 13,616-foot summit would be named after Blaurock, and the adjoining 13,531-ft summit would be named for Ervin, both summits are at least a mile outside the Collegiate Peaks Wilderness. Furthermore, the primary argument established the fact that the two peaks reside near La Plata’s Ellingwood Ridge, named after Albert Ellingwood, a good friend of Carl Blaurock.

Woody Smith had his eye on two unnamed centennial 13ers, southwest of Lake City. His primary argument established that the two climbers should be honored with peaks that are in the state's highest 100, giving them broader recognition among the new generations of peak-baggers. A major strike against his proposal is that the peaks are located inside the Red Clouds Wilderness Study Area.

Both proposals were supported by the CMC and ultimately in late 2004 Lowell Forbes realized his dream. The naming board quickly passed on Smith’s unnamed San Juan thirteeners due to wilderness logistics and red tape. The board finally honored Blaurock and Ervin with two summits in the Central Sawatch, on a ridge between Mount Hope and La Plata Peak, right around the corner from Ellingwood Ridge.

Are these two summits worthy of Mr. Blaurock and Mr. Ervin? The topic is debatable; I say yes, their proximity to Ellingwood Ridge seems logical and well thought out. Have a look at the mountain and decide for yourself. Of note: we decided to forego a climb of Ervin, to continue on the ridge to UN13,686 where we could get an up close and personal view of the rarely viewed south face of La Plata Peak. 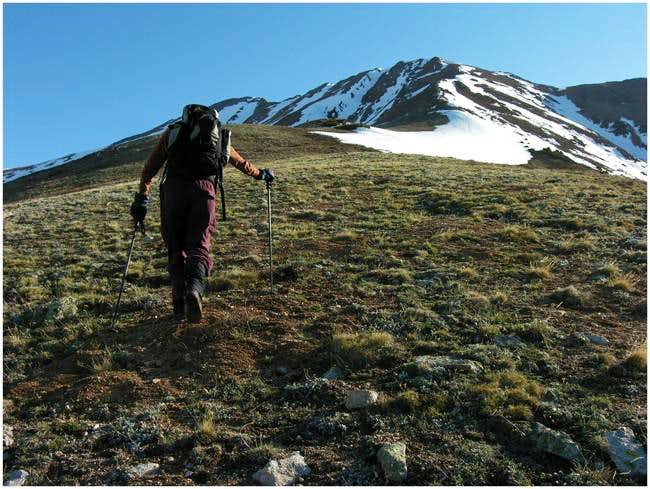 Mount Blaurock
The officially ranked (#186) Mount Blaurock (13,616-ft) and the unranked UN13,686 reside on a long, curving ridge that connects Mount Hope to Colorado’s fifth highest mountain, La Plata Peak. The ridge is complex, going from rugged and tower ridden to broad and grassy, a theme that presents itself over and over. Along this ridge are three notable highpoints, Ervin Peak, Mount Blaurock and UN13686. The above summits along with Mount Hope and La Plata separate the two most popular drainages in the Sawatch, the Lake Creek Drainage and the Clear Creek Drainage.

Mount Blaurock and UN13,686 are not technically challenging what-so-ever. However, they are physically challenging and steep at 3,700-ft in 3 miles. What I’ll remember most about that day were the stunning and unique views of the surrounding mountains. Because of unique views I gained even more respect for big mountains like La Plata Peak, Mount Hope, Winfield Mountain, the Ice Massif, Mount Huron, Rinker Peak and Sayers. 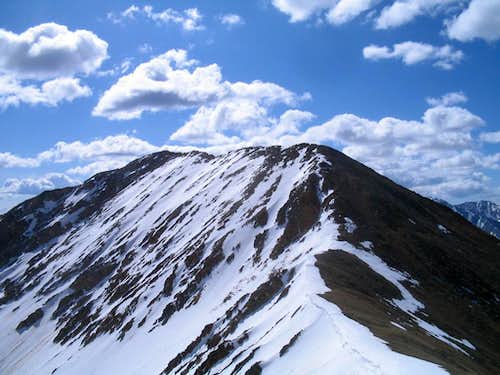 Ervin Peak is Colorado's 233rd highest peak at 13,531' above sea level. The peak makes an excellent companion to neighboring Mount Blaurock, and is appropriately named for Bill Ervin, a frequent climbing partner of Carl Blaurock's. Blaurock and Ervin completed the then known list of Colorado's Fourteeners together in the early 1920's. Their namesake peaks now bask in the view of several of these peaks, including neighboring La Plata Peak, and Mount Huron to the south. The ridge to the west connects to Mount Blaurock, and to the east Mount Hope. From the summit you can peer straight down to the town of Winfield some 3200' below you on the south, and Willis Gulch to the north.

Ervin Peak is the more challenging of the two peaks to climb, and the ridge traverse from its western false summit to the true summit involves some surprisingly exposed climbing on loose rock. The climb starts with a steep ascent of the southwest ridge out of Grey Cooper Creek, you will gain 3000' of elevation in about a mile and a half! Great care must be taken at the final two towers just before the summit. Careful route finding will keep the difficulties at class 3, but loose rock will be your primary concern. Combining Ervin Peak with Mount Blaurock makes for a wonderful and rewarding tour.

Take Chaffee County 390 west from Hwy 24 (15 miles north of Buena Vista, 19.3 miles south of Leadville.) County 390 is an improved dirt road for all vehicles. Continue 11.8 miles on 390 until you reach the historic mining town of Winfield. The road will fork here; turn right and do not turn left and go over the bridge over Clear Creek. The road becomes a high clearance road immediately. Go .33 mile to the old Winfield Cemetery and continue another mile until you reach a large meadow after crossing Grey Cooper Creek. This is the Trailhead, and awesome camping is available here.