Standing at 13,517 feet, Trinchera ('trench') Peak is the northern most 13er in the Culebra Range of the Sangre de Christos. When viewing the peak from the east, it's easy to see how the namesake originated.

As the cornerstone of three counties--Huerfano, Las Animas, and Costilla--the western slope is entirely on private land and unfortunately is not open to the public. The eastern slope is accessible from the Blue Lake area as well as the Purgatorie Campground.

Due to GPS technology, most all the summit elevations have been raised at least a few feet so, it's very possible that if someone has already GPS'd Trinchera, the updated height could very well be different than stated here.

NOTE: The information within this geology section--including the image--was discovered via a Google search. I attempted to contact the source for permission to use this information. Those attempts failed. However, I have included credit to him from the webpage he published which is no longer available.

All of the following excerpts come unedited directly from his webpage---billokc.


Regional Setting
Trinchera Peak is located in Huerfano County Colorado near the village of Cuchara. Here, the Culebra Range of the Sangre de Cristo Mountains forms a north striking ridge. The ridge forming sandstone bedrock (Sangre de Cristo Fm.) is a detridal arkosic wackie derived from alluvial fan sediments of the ancestral rockies. These sediments were laid out during the Pennsylvanian and Permian eras. The formerly flat lying sandstone strata were thrust into a vertical orientation by uplift, faulting, and block rotation events dating back to the mid- to late Miocene (Lindsey, 2001).

Glacial Structures of Cucharas Creek Valley
Cucharas Creek Valley is a classic expression of an alpine glacial valley. Glaciation events causing the erosion and deposition of glacial structures probably dates back to the last North American Glaciation during Pleistocene or even Holocene time. This figure is uncertain due to lack of datable material in moraine structures. In the upper valley, glacial erosional features include a large, well excavated cirque and a few smaller mini-cirques. 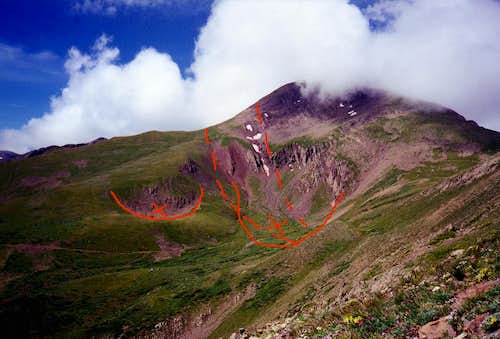 This image of Trinchera Peak shows the location of the main cirque and a mini-cirque (semicircles with "X"). Shown by the dashed lines are thrust faults caused during mountain building episodes during the late Miocene. The large, main cirque is the one on the thrust faults. 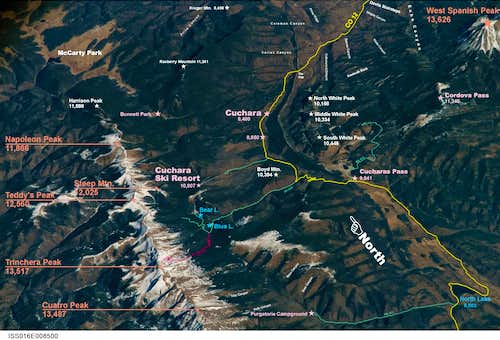 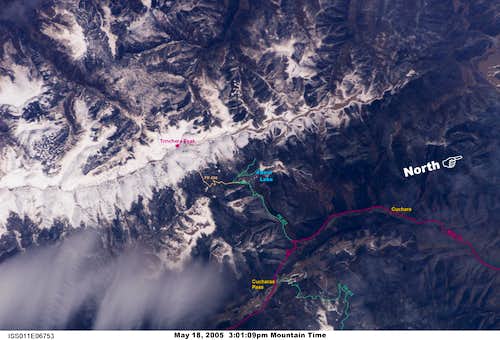 Click to ENLARGE these images from space of the Trinchera Peak area for details!!!

From the south: Take CO 12 west from Trinidad over Cucharas Pass and down 2.35 miles to Forest Road 422. From there just follow as above.

Camping is available at Blue Lake Campground at $13/night which includes the first two vehicles. Third vehicles are an additional $5/night unless it's a towed vehicle.

Day use/parking fee is $5/day. If you park in a campsite for day use, you must pay the $5 fee.

The camping season at Blue and Bear Lake CGs generally begins Memorial Day.
Blue Lake CG is usually shut down in early to mid-October while Bear Lake CG is generally held open for hunters until mid-November.
This, of course, is subject to the first heavy snowfall at which time Forest Rd. 422 leading up from CO 12 is closed off completely.

Facilities at the campgrounds include running water and modern (relatively clean!) outhouses although running water is shut off when Blue Lake Campground is shut down.

On the subject of running water at Blue/Bear Lake CG: During years of extreme drought (e.g. 1989), the wildlife, which also uses the water supply, contaminates it to the point that it cannot be purified enough for human consumption.
In past years, the campgrounds have remained open with the water supply shut off. Camping fees were waived, but campers HAD TO HAVE THEIR OWN SUPPLY OF WATER sufficient enough to last through their stay.

About one mile past Blue Lake CG is Bear Lake CG.

Camping fees are the same as Blue Lake: $13/night and includes the first two vehicles. The thrid vehicle with separate group is $5/night.

As 4WD roads go, this one is about average. It's not anything like the "goat trail" road that goes up Blanca Peak, but it's also NOT interstate highway quality either and should not be taken lightly.

This is Forest Rd. 436 and it begins across from the entrance to Blue Lake Campground (elev. 10,500 ft). The length is about 3.75 miles and ends on the northeast face of Trinchera Peak just below an abandoned mine shaft (elev. 12,600 ft). The one way driving time is about 45 minutes in a 4WD. Due to the nature of ATV's, I'm assuming they would be a shorter drive time than 4WD vehicles. Elevation gain is about 2,100 ft.

The first 0.2 mile is passable for ordinary cars and there is a parking area to accomodate 4 or 5 vehicles. After that, you'll need 4WD or an ATV, or your own two feet.

After encountering about 6 switchbacks, the road junctions with the North Fork Trail which continues south (see section below). There looks to be enough area to accomodate parking 5 or perhaps 6 vehicles.

The switchbacks which approach the mine on the south facing slope of 'the trench' (seen from the summit) are quite rough and though the turnarounds are extremely tight, a short-wheelbase vehicle is not a problem.

It should be noted that the road becomes littered with sharp tire-eating rocks once it emerges above treeline. If you drive it with ordinary highway grade tires, you're just asking for a blowout. I've seen this happen to other folks.....not fun. Make sure you've got all-terrain tires for this road.

Camping fees are pretty much in line with Blue/Bear Lake CGs; $13/night and includes the first two vehicles. The third vehicle is considered an extra for which there is an additional $5 fee. Day use/parking is $5/day valid until 5pm. If you park in a campsite for day use, you must pay the $5 fee.

The Trailhead is on the north side of the CG where ample parking is available.

As is the case with most any mountain in Colorado, Trinchera Peak is subject to any type of weather. Adverse conditions can best be avoided when climbed early in the morning.

Late spring/early summer is before the storm season begins, although remaining snowpack may still be an obstacle unless you're on skis.

In mid-summer, early sunrises allow for early starts before thunderstorms develop. Slushy baseball size hail, enough to cover the ground, has been experienced in July. In August 2008 there was a snowstorm that had snow levels down to just under 12,000 ft!! 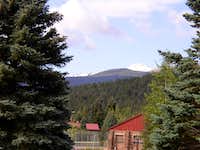 Early fall provides mostly clear days without the thunderstorm threat, but can be subject to early snow dustings or the odd heavy blanket of snow as was the case in Sep/Oct 2002, September 2006, and mid-October 2009.

Two known routes to the summit are presented here. The first is from the eastern flank and pretty much follows the Huerfano County line up the face to the summit. If driving, you may want to leave your vehicle somewhere near treeline below the hairpin turn.

The other route is on the north ridge. The advantage for this one comes from being able to drive all the way to the saddle ridge north of the mine and then hiking straight up the ridge. There is a drop off of about 8 feet which must be negotiated, but then it's a matter of picking your way through a rocky area to reach the summit.

If you're up for a rather different experience at Trinchera Peak, the relatively level area on the north side base of the peak just down from the mine is a good spot for parking to spend the night. The view from here during the night is spectacular not to mention watching early morning light and sunrise. If a campfire is desired however, bring along enough wood from below.

Although this spot is level it's not particularly flat due to the grassy vegetation and rocks which give it a rough surface. Because of this, tent camping would not be advocated, but also not discouraged. The best bet would be SUV camping.
Morning low temps experienced in July '89 & August '84 ranged from upper 20's to lower 30's.

The big advantage to spending the night here is you're already at the base of the peak when daybreak hits. It could be possible to watch Sunrise from the summit. Hmmm.....how cool is that?

So you're into a bed/shower/hot food situation before or after the climb? Nearest place(s) are in Cuchara.

The Cuchara Inn or River's Edge B&B and the Dodgeton Creek Inn are good bets. Some rooms at Cuchara Inn are equipped with small kitchenettes.

The Dodgeton Creek Inn is very nice and offers a wide variety of amenities. There are also a handful of guest ranches in the area as well.

For food...you can't beat The Dog Bar & Grill for a varied menu including a wide variety of adult beverages and there is a webcam showing the exterior of the building.

The Timbers across the road offers a finer cuisine and adult beverages as well.

There are a couple of breakfast options in Cuchara. If you're staying at the River's Edge B&B or the Dodgeton Creek Inn, breakfast is provided for you. The larger rooms are equipped with kitchen areas.


In La Veta, the Main Street Diner on Hwy 12 opens at 7am with an excellent full breakfast and lunch menu, there's also Sammie's, and the Ryus Ave Bakery

A room with kitchenette at the Cuchara Inn lets you do your own breakfast (been there, done that).

For more on the Cucharas Valley including the Nat'l Weather Service 7 Day Forecast: Cuchara Valley