The Ötztal Alps are one of the largest and most important groups of the Eastern Alps. Though certainly not the highest alpine mountain range it nevertheless is one of the most glaciated ones. More than 300 mountains surmount the 3000m mark with impressive drops to the valleys below. The Ötztal Alps derive their name from the village of Ötz, which is located at the mouth of the Ötztal Valley, where it opens into the broad Inn Valley. The whole group of the Ötztal Alps is wedged between the two most important east-west traffic routes in the eastern Alps, the Inn Valley to the north and the Vinschgau Valley / Val Venosta to the south. The eastern boundary is the Ötztal Valley (N) itself together with the Passeier Valley (S) while the western boundary is composed by the upper Inn Valley (N) and the upper Vinschgau / Val Venosta (S). These eastern and western boundaries again are important traffic ways (N-S) with Reschen Pass in the west and the Timmelsjoch Pass in the East.

While the Valleys to the North and South are rather deeply set into the mountains (averaging about 750m) the Ötztal Alps themselves reach Altitudes of more than 3000m. Actually more than 300 mountains can be counted which reach and surmount this altitude so that from the sheer bulk the Ötztal Alps are one of the most massive mountain ranges in the whole Alps. The main ridge, which runs in an east - westerly direction forms the border between Austria and Italy in this region and both parts of the border couldn't be more different (having nothing to do with politics). The Austrian part of the range is heavily glaciated and together with its easy accessibility by motorway through the Inntal Valley this resulted in very far developed tourism. Especially in Winter the northern valleys are packed with downhill skiers who remain there until well after Easter each year to ski on the glaciers. In consequence a lot of ski-lifts and cable cars have been built which mar big parts of the landscapes. The deeper you get into the valleys however, the more remote and lonesome they get. The drainage in the northern (Austrian) part runs from South to north through three deeply set valleys: Ötztal, Pitztal and Kauner Tal. The mountains in between form very distinctive ridges which are generally each considered subgroups of the Ötztal Alps.

In the southern (Italian) part of the Ötztal Alps things are very different. Glaciers are rather small, only near the main ridge several of the northern glaciers reach further down to the south. Since Vinschgau / Val Venosta is a far less travelled route than the Inntal Valley in the north, the southern ranges of the Ötztal Alps are remote and lonely (with one exception: Kurzras in Schnalstal Valley, where there is a cablecar to Grawand on the main ridge). The drainage runs all ways so that valleys run sharp angles. Many of the valleys are closed to cars so that in order to reach the trailheads you need to hike long access routes. Still the mountains are beautiful and often you can take advantage of the small cablecars that alp farmers built to reach their farms. A call from the "bottom station", a shaky ride across infinity, a heavy bump at the top, 1 or 2 Euros fee and off you go. Quite an experience - draw your breath and close your eyes!

Ötzi
I was amazed by the feedback I got on all my Ötztal Alps pages from people all over the world. Many of you wanted to know if it was here that the Stone Age cave dwelling human, who has been named Ötzi, was found. And the answer is yes! For those interested I added a section in the lower reaches of this page where you can find some links and further information.

Languages
I feel I have to say something about the names of these mountains. Before the First World War the whole region belonged to Austria and German was spoken everywhere. The part south of the main ridge went to Italy after the War but still German is the principal language spoken there. Of course, over the years many (if not all) of the mountains in the south acquired Italian names, mostly literal translations of the German ones. Therefore - wherever I could find them - I include both names into the listings below with the original German name up front. Especially for the main ridge I was having trouble finding the Italian names - I have the suspicion that for these mountains the German names are in use even in Italy.

The Subgroups / The Ötztal Alps on SP

With its deep set valleys the Ötztal Alps can be divided quite neatly into several subgroups, the most of which are composed of single ridges. The subdivision on this page follows the suggestions by the German Alpine Club, as put down in the Alpenvereinsführer (see Maps & Books Section). Mountains, which already have been submitted to SP are listed within their corresponding subgroup. 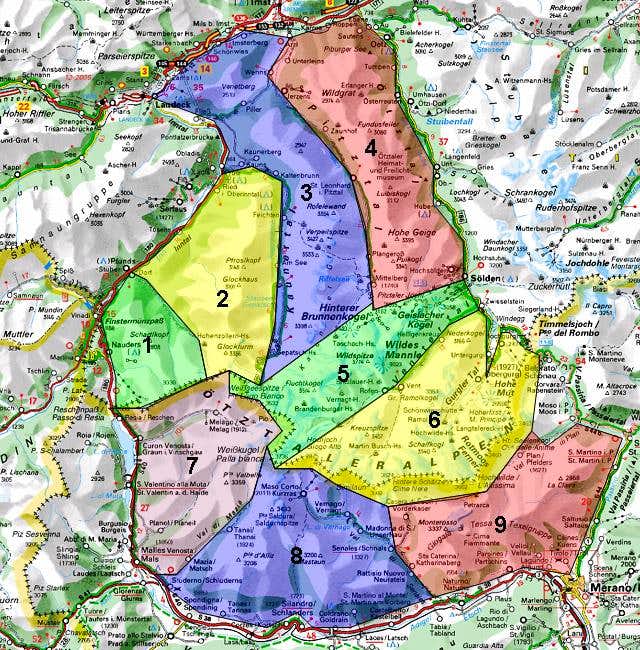 Interactive Map of the Ötztal Alps. Click the numbers to be directed to the respective sections. 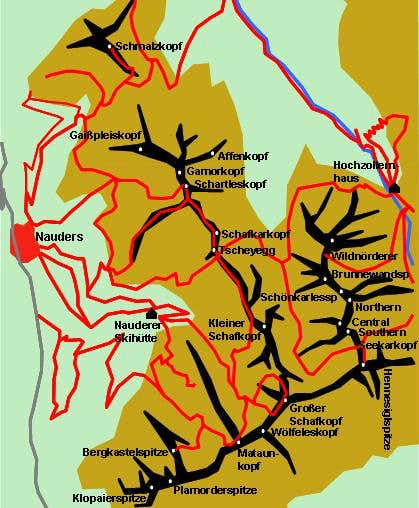 This is the north-westernmost subgroup of the Ötztal Alps. Located in Austria, on the northern side of the main ridge the mountain carry only German names (exceptions are the ones on the ridge itself. The subgroup is small; its boundaries are

The area between Tscheyegg and Bergkastelspitze is covered by the cablecars, lifts and ski runs of Nauders. Most interesting for climbers are the vie ferrate that have been built (to increase the traffic on the cablecar in summer!) at Bergkastelspitze ("Goldweg") and Plamorderspitze ("Tiroler Weg"). For a hiker the eastern part with basis at Hohenzollernhaus is a nice option.

The Glockturmkamm Ridge is the first of the S-N ridges on the northern side of the border. The subgroup is bounded by 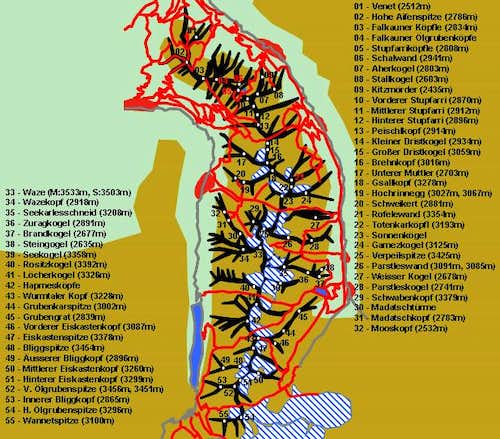 Wedged between the Kaunertal and Pitztal Valleys the Kaunergrat Ridge is bounded by the Inntal Valley to the North and the Weisskamm Ridge to the south. All mountains are on Austrian ground and carry only German names.

The Geigenkamm Ridge - the easternmost of the northern ridges is located between the Pitztal (W) and Ötztal (E) Valleys. Further boundaries are the Inntal Valley to the north and the Weisskamm Ridge to the south. 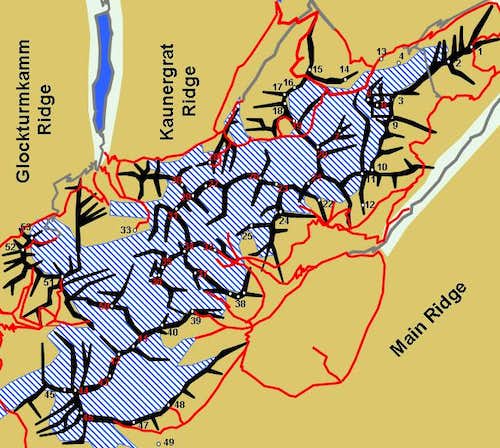 The Weisskamm Ridge contains the highest and most glaciated (therefore the name) summits of the Ötztal Alps. It runs WSW-ENE between Weissseespitze on the main ridge and Gaislacher Kogel above the Ötztal Valley. It builds the southern boundary for both the Kaunergrat and the Geigenkamm Ridges as well as for the Kaunertal and Pitztal Valleys. Its southern boundary is the Valley of Vent. For more information see the Weisskamm Page 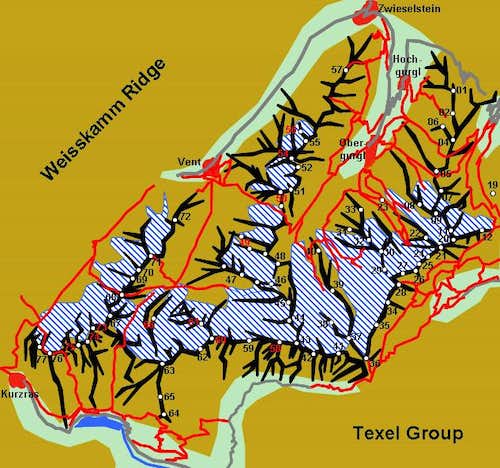 As said above the main ridge constitutes the border between Austria and Italy in this part of the Alps. It runs along the whole width of the range and makes a long southern bend between Weissseespitze (where the Weisskamm Ridge starts) and the Timmelsjoch Pass in the east. In its eastern part it splits in two the Ramolkamm Ridge (which turns off northward at Karlesspitze) and the eastern main ridge. For more information see the Ötztaler Hauptkamm Page 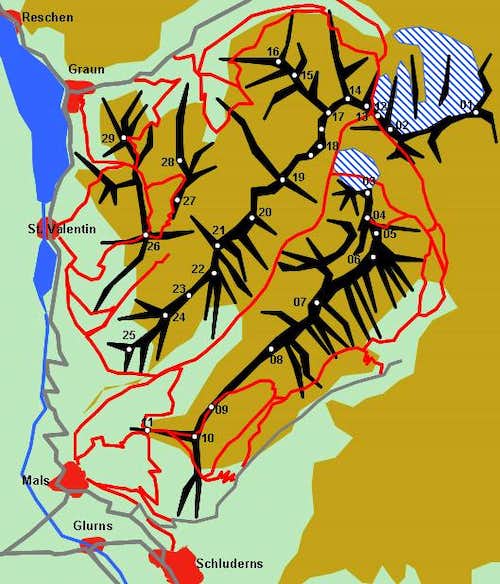 Located to the west of the Ötztal Alps this subgroup is the loneliest of them all. Several valleys turn off from the main Vinschgau Valley, which can be used for access. Aside from cattle and sheep you rarely see a "soul" here. Nevertheless the subgroup certainly has its charme. Summits reach way more than 3000m and views into the heart of the Ötztal Alps are breathtaking. The summits are listed east to west. 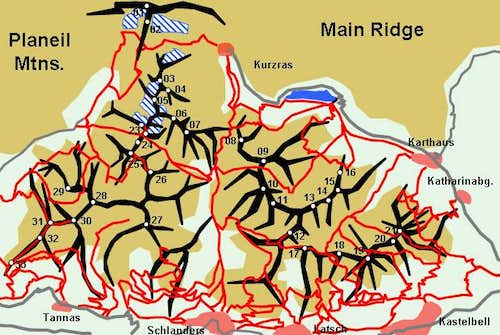 The Saldurkamm Ridge is located east of the Planeil Mountains and is cut off from the main ridge by the deep cut of the Schnalstal Valley / Val di Senales. The ridge runs from north to south but bends to the east. It is in this southern part, the Vinschgau Sonnenberg, where you will find the best views. Across the deep cut valley you'll be able to see the mountains of the Ortler / Cevedale Group and to the east the western Dolomites can be seen. 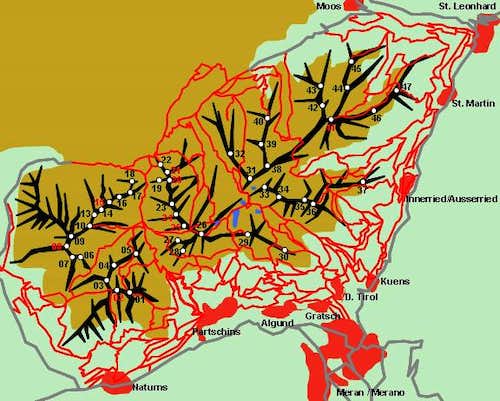 The Texel Group / Gruppo di Tessa is set apart from the rest of the Ötztal Alps. Located in the mountain range's south-west it is separated by the Pfossental and Pfelderer Tal Valleys (Val di Fosse, Val di Plan). The subgroup is a rather complicated mountain range in itself as there are no distinctive ridgelines to be found. The outer reaches of the group is very popular among hikers because the Meraner Höhenweg hiking trail runs around the group. In its inner parts the group - like all the southern subgroups of the Ötztal Alps - is very remote and lonely.

Ötzi, the Iceman from Hauslabjoch 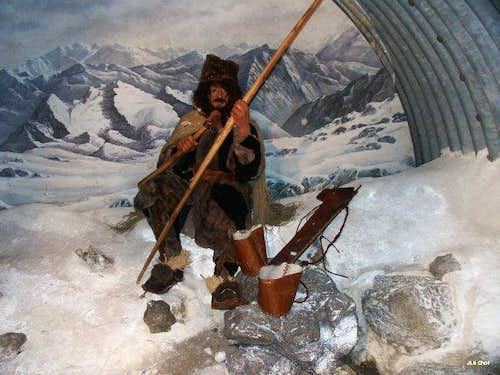 As stated in the overview section, Ötzi the 5300 year old ice age man has been found between Grawand and Similaun at Hauslabjoch. For those of you interested in archaeology here are a couple of useful links:

You're right of course - at the time I wrote I meant it figuratively speaking - someone very old. I'll change it. As for the dead links. There are probably more dead links - I have been willing to work on the page for ages but get deflected again and again ...