The Stubai Alps - one of the main groups of the Central Alps – are a glaciated range with a great number of 3000ers, wedged between the Ötztal and Wipptal Valleys. In character the mountain group resembles its neighbours, the Ötztal Alps to the west and the Zillertal Alps to the east - deep valley floors alternate with high glaciated summits. It is easily accessible either from the Brenner motorway or from A12 (Inntalautobahn) in the north. In addition there are two road passes – Timmelsjoch / Passo del Rombo to the south-west and Jaufenpass / Passo di Monte Giovo to the south. The group is named for Stubai Valley which cuts through two thirds of the group from the north-east. The valley starts near Innsbruck and can be easily reached from the Brenner motorway.

Easy accessiblity means a lot of tourism, especially in winter time. You’ll find lots of ski lifts in the valleys which turn off from the Brenner Pass Road and these regions are also very crowded in summer. But once you reach the trailheads deep in the valleys and start to explore the centre of the group you will leave the crowds behind. There are lots of alpinistic opportunities in the group – glacier traverses, lonesome ascents or panoramic high trails. Moreover a great number of huts cater to hikers and climbers so that you can get everywhere in the group within a day.

In winter the slopes of the group - especially the northern ones and the ones in Stubai Valley are very crowded for downhill skiing since the group is one of the most popular skiing desinations in the Alps. Stubai Valley extends far inside the group and from the valley end you can reach the long runs coming down from the main ridge mountains. Here glacier skiing extends far into late spring and early summer.

Then there is tour skiing - the range is one of the most attractive tour skiing destinations of the Alps. Once you leave the downhill crowds behind you'll be on your own enjoying magnificient views. The Northern Sellrain Group is particularly popular, commanding great views of the deep Inn Valley and the Mieming and Wetterstein Ranges to the north.

Similar to the Ötztal and Zillertal Alps the southernmost part of the Stubai Alps is located on Italian territory. The alpine main ridge has served as the border between the two countries ever since the end of WW I. Still on both sides of the border you find the different parts of the state / region of Tyrol and most of the inhabitants south of the border still speak German. Therefore on this page all names will be given in German with the Italian names as addendum.

Geologically the Stubai Alps are more interesting than their neighbours. While much of the group is made up of eruptive rock (gneiss and granite) to the east of the group you will find bizarre limestone ranges. The Kalkkögel-, Kirchdach- and Tribulaun Groups rather resemble the northern limestone Alps than anything on the alpine main ridge. These groups are very interesting for climbers though often the rock is brittle or rotten.

The Subgroups – the Stubai Alps on SP 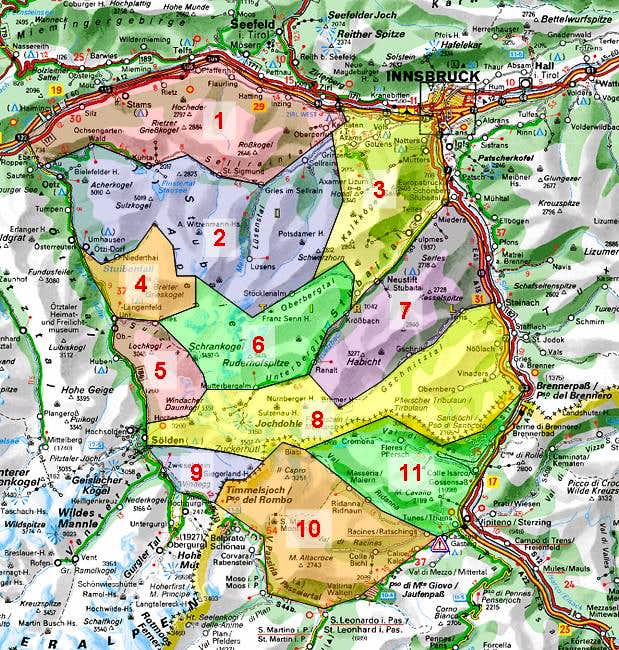 Interactive map of the Stubai Alps. Click the numbers to be directed to the corresponding section on the page below.

In contrast to the well structured neighbouring Ötztal Alps the Stubai Alps are made up from a great variety of criss-crossing ridges. Moreover rock composition changes across the group so that small groups like Kalkkögel are considered separate subgroups. I roughly followed the Alpenvereinsführer by Walter Klier (see Maps & Books Section) but joined several of the smaller subgroups with the larger neighbouring ones. Mountains, which already have been submitted to SP are listed within their corresponding subgroup.

The northernmost part of the Stubai Alps is separated from the rest of the range by the deep Sellrain Valley. This subgroup, the Northern Sellrain Group stretches across almost the whole width of the range, starting from the Ötztal Valley in the West to the village of Kematen, west of Innsbruck. To the north it is bounded by the Inn Valley, to the south by the Sellrain Valley. Mountains in the group do not reach more than 3000m but with the valley elevations between 700m and 1500m they all are impressive (and strenuous) hiking/climbing destinations.

In terms of the sheer number of mountains the southern Sellrain Group is one of the largest subgroups of the Stubai Alps. Like its northern counterpart it stretches between the Ötztal and Senderstal Valleys. The northern boundary is Sellrain Valley while to the south it stretches right into the center of the range. At its southern end the mountains of the subgroup are glaciated and here a large area has been declared "Ruhezone" - a sanctuary for man and beast. Several smaller valleys lead into the subgroup and facilitate access to the central part. 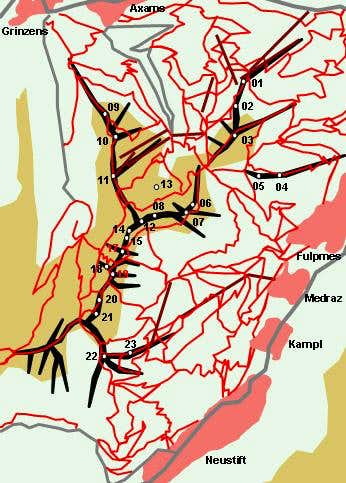 The Kalkkögel Group like its name implies (Kalk = limestone) is a small limestone range made up of a single ridge. The Group is wedged between the Senderstal and Stubaital Valleys. Its northern slopes have been "developed" for downhill skiing. On the ridge itself some very interesting climbing routes have been established and a "Klettersteig" (ferrata), the Lustige Bergler Steig runs along the east of the summits. The mountains are lower than in the remainder of the Stubai Alps and only Schlicker Seespitze reaches (barely) more than 2800m. The summits are listed north to south. 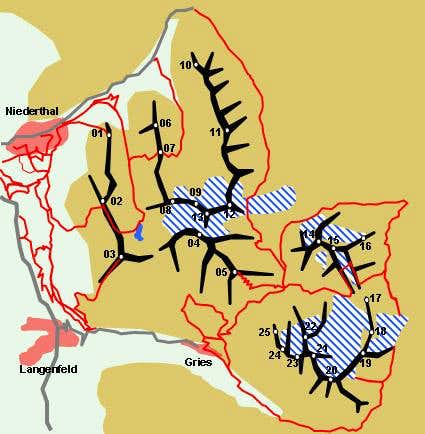 This small Group is located to the west of the Stubai Alps between the Horlachtal and Sulztal Valleys. It can be reached easily from Langenfeld in Öztal Valley. Several mountains reach more than 3000m and the southern range around Bachfallenkopf is glaciated (Bachfallenferner). The remote summits again belong to the "Ruhegebiet" sanctuary. 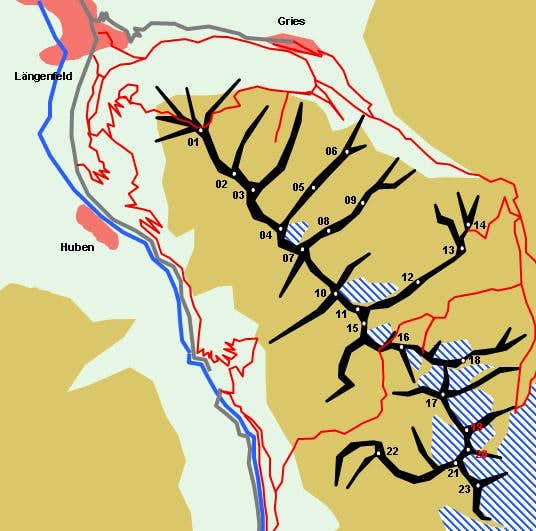 The Sulztal Ridge is another small subgroup hovering above the Ötztal Valley to the west of the Stubai Alps. Its boundaries are Sulztal in the north and east, Ötztal to the west and Wütenkar, Wütenkarsattel and Sulztalferner to the south. The group consists of a single ridge which runs from north-west to south-east and ends close to the highest mountains of the Stubai Alps. The subgroup is not developed, not even for hiking - only two hiking trails cross the ridge to the north and south respectively. 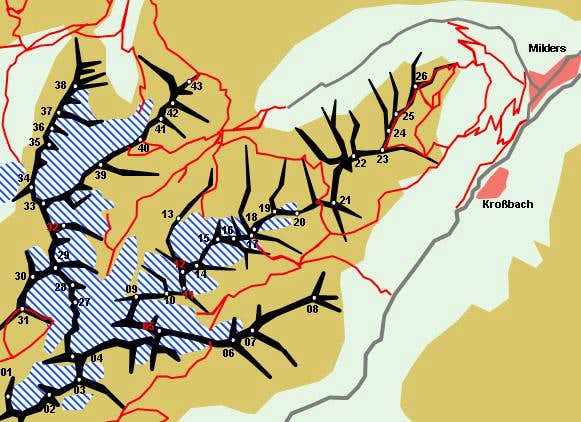 Geographically the Alpein Group is the centre of the Stubai Alps Range. Most of the mountains top the 3000m mark and many of them are glaciated. Only a few of the summits can be reached by hiking trails (Rinnenspitze, Knotenspitze, Schrankogel), for all others you need alpinistic experience. The boundaries of the group are hard to fix since the separating passes are not profound. The subgroup consists of three ridges which all run from south-west to north-east between the Stubai- and Oberberg Valleys. The north-western end of the group is west of the village of Neustift in Stubai Valley. 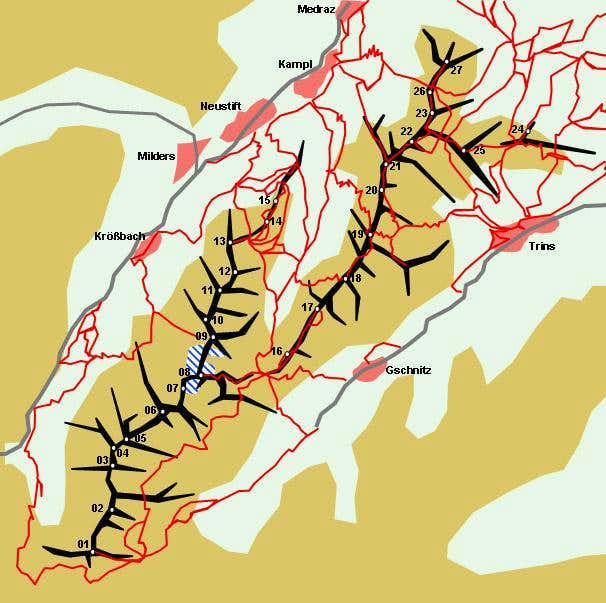 The Habicht / Serles Group consists of two ridges which are located between the Stubai and Gschnitz Valleys to the east of the Stubai Alps. Here again you can find limestone mountains, which especially around Kirchdachspitze are very impressive and offer interesting climbing routes. Several of the mountains are easily accessible and thus are among the most popular mountains of the Stubai Alps.

The Stubai Alps Main Ridge is part of the Alps Main Ridge and stretches across the whole range between (north of) Timmelsjoch / Passo del Rombo and Brenner / Brennero Pass. Naturally, it is composed of the highest mountains of the Group and also quite naturally it is the largest of the subgroups. Not quite naturally the main ridge at the same time is the border between Austria and Italy. In its eastern part, the ridge splits in two with a lesser ridge running south-west to north-east. 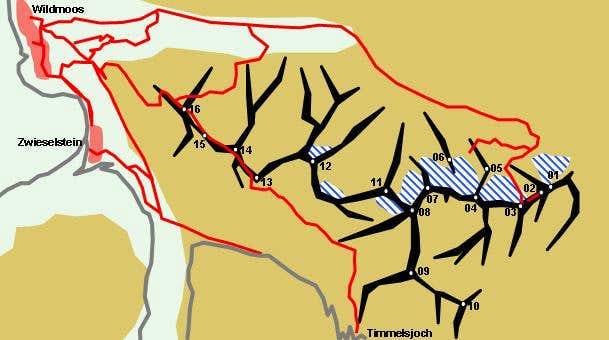 The small part of the Alpine Main Ridge between Timmelsjoch and Zuckerhütl is not counted among the Stubai Alps Main Ridge. Instead, it is called the Windach / Brunnenkogel Ridge. It descends towards the pass pretty fast and is one of the smallest subgroups of the Stubai Alps. The northern part around Brunnenkogel has some nice hiking trails while in the southern part only Hohlkogel can be reached by hiking trail. 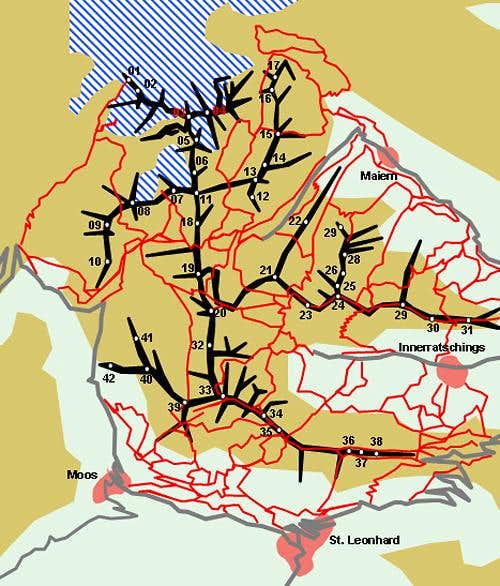 The Botzer Group is the most popular subgroup on the Italian side of the Stubai Alps. It is located between Passeiertal / Val Passira, Timmelsjoch / Passo del Rombo and Jaufenpass / Passo di Monte Giovo. The tree south tyrolean valleys (Passeiertal, Ridnauntal and Ratschingstal) lead towards the subgroup. Only the northern slopes between Jaufenpass and Ratschings have developed ski runs. The remainder of the group is left to hikers, tour skiers and - to a lesser extent - mountain bikers. Botzer, the group's highest summit is separated from the main Ridge by the huge Übertalferner. 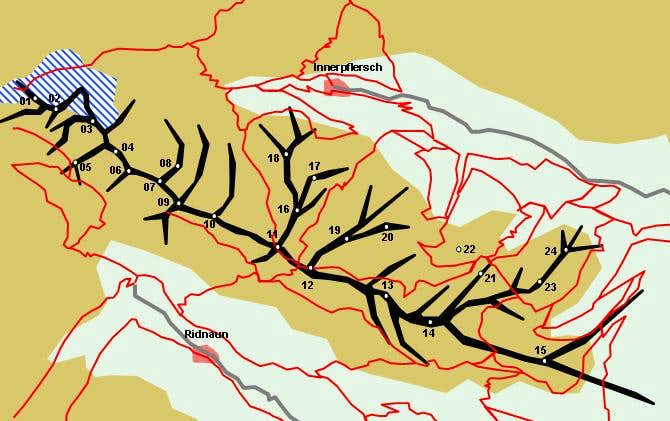 The Aggls / Rosskopf Ridge turns off from the main ridge near Westlicher Feuerstein and runs in a south-easterly direction. Except for a couple of small side ridges, this is a single ridge which drops lower as it gets farther away from the main ridge. The eastern summits of the group are quite popular while the higher summits near the main ridge rarely see visitors.

The Stubai Alps is one of the most easily accessible groups on the Alpine main ridge. Two of the most important traffic ways touch the group to the north and east and two important passes add to the accessibility. Moreover there is a road right through Sellrain Valley in the north, cutting off the northern Sellrain Group from the rest of the Stubai Alps.

The closest international airport is at Innsbruck Kranebitten right to the north of the Stubai Alps.

Northern Access
The northernmost part of the Sellrain Group can be reached most easily from Inntalautobahn (motorway A12), west of Innsbruck. At Petersberg and Kematen the road into Sellrain Valley turns off from the motorway, in case you want to reach the central ranges of the Stubai Alps.

Western Access
To the east of the Stubai Alps there is Ötztal Valley, which can either be accessed from motorway A12 (north) or SS44b from Meran / Merano across Timmelsjoch / Passo del Rombo

Eastern Access
Take Brenner Motorway E45 from Innsbruck or Bozen / Bolzano. All along the way between Sterzing / Vipento and Innsbruck valleys turn off to the west of the motorway, leading into the Stubai Alps.

The Stubai Alps are home to a great many mountain huts. Almost any summit can be reached in a day from one of these refuges. The huts in the centre of the range all close for winter while the ones on the outskirts usually remain open for the winter. In November and May almost all huts are closed. The following table lists the refuges according to the valleys through which they can be reached.

On both sides of the border you have the choice among a lot of hotel rooms and apartments. Here is a selection of links:

Like in the Ötztal Alps there is a "Ruhezone" (=calm zone) around the centre of the Stubai Alps. This means they are off-limits for downhill skiing at all times of the year while hiking and climbing (again with the obvious restrictions) is allowed.

Both Timmelsjoch / Passo di Rombo and Jaufenpass / PAsso di Monte Giove can be clsed at all times of the year due to snowfall. Moreover, the road across Timmelsjoch is a toll road which is closed after 8 p.m. Keep that in mind when crossing over to the other side of the border.

Look for the actual weather conditions, using one of the links below: