"V" after the highest peak in the area Vermilion (The San Juan Mountaineers, founded in 1912, assigned an alphanumeric designation to select unnamed peaks. "V" means the peak is on th the old 15-minute Vermilion quad). And as one would expect there are other peaks named starting with V: "V 2", "V 3", "V 5", "V 6" etc. (up to "V 10").
Colorado Rank: 228 (which means that many people skip this peak since it is just a few feet short to make it a bicentennial peak - highest 200 in Colorado. The last bicentennial peak has an elevation 13,580 ft, so "V 4" is just 40 feet short of getting onto a bicentennial list).
I noticed a discrepancy in the elevation described in The Colorado Mountain Club Guidebook: Guide to the Colorado Mountains. This book gives it an elevation of 13,520 feet, but 13ers.com and all other sources I searched give an elevation 13,540 ft. The peak has a lot loose scree, and rock avalanches are common. This could cause some loss in its height, but not 20 feet, ? 1-2 feet (most likely a wrong information in the guidebook). There is not much other information available. The above mentioned book "Guide to Colorado Mountains" mentions only this peak as an approach route up Ulysses S. Grant. None of my other numerous Colorado guide books mentions this peak perhaps because this area has so many rugged 13ers, which attract more attention.
"V 4" looks very scenic from Island Lake with its steep cliffs sloping eastwards into the Island Lake Basin. The view from Ice Lake area shows an oblong peak with many summits, still steep, with a lot of loose scree. See photos below.
The high saddle between Ulysses S. Grant and "V 4" at 13,220 feet makes it an excellent combination for summiting both peaks. The saddle is more than 300 feet below the summit which makes this peak an official ranked peak in Colorado.
If one wishes to have a complete tour of the area, you can ascend via Island Lake basin and drop from the summit of "V 4" south into the Ice Lake Basin. Both lakes are very scenic - Island Lake with a small island in the middle and Ice Lake with its turquoise blue color.
Both basins are knowns for their wildflowers - July through mid August. The area of Ice lake basin and Island lake basin is popular with hikers, but most do not venture past the lakes.
The 100 mile Hardrock race runs through the Island Lake basin.  The course passes Island Lake and climbs the pass between Ulysses S. Grant and "V 2".
Nearby Peaks: 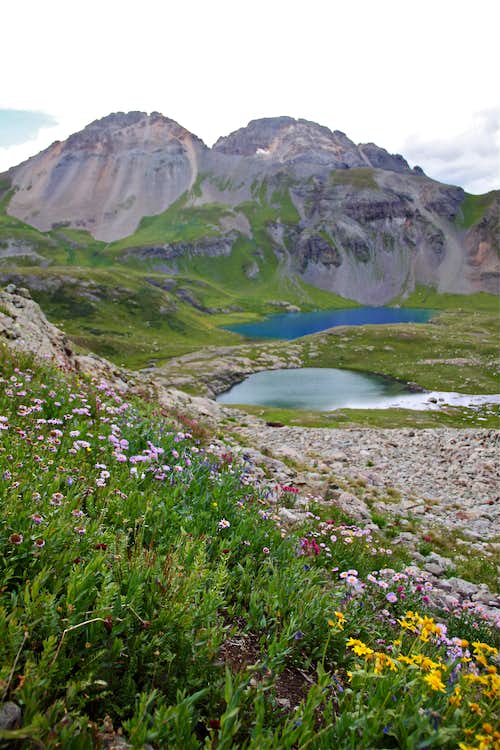 Ulysses S. Grant Peak (on the right) and "V 4" on the left from Ice Lake Basin 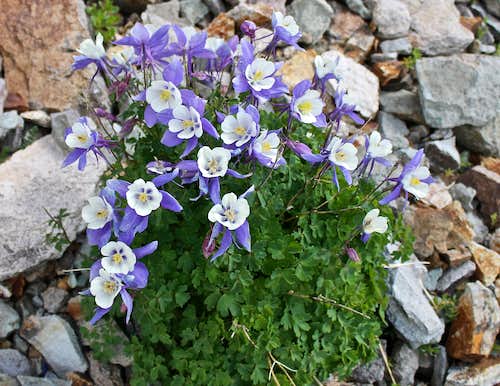 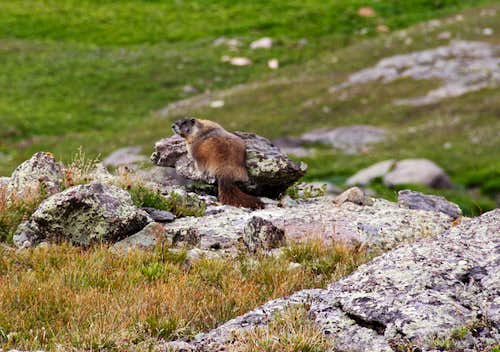 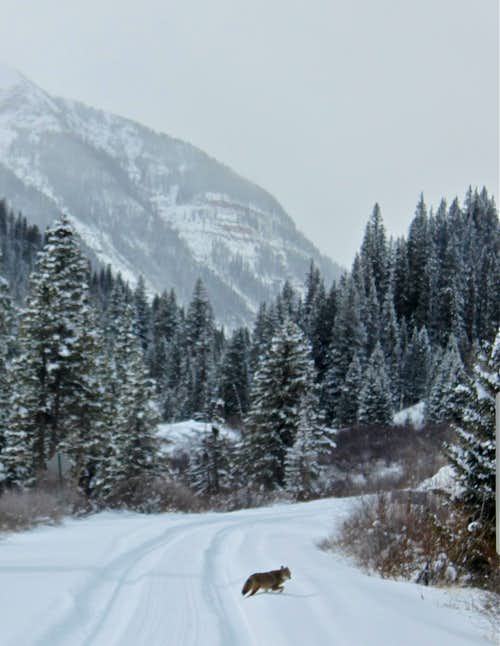 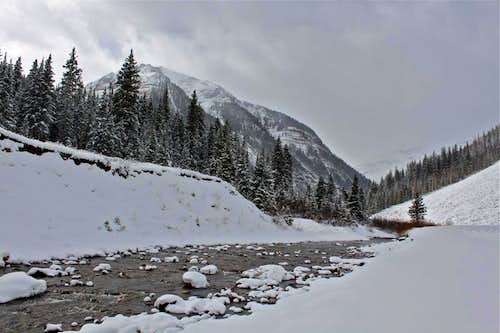 Mineral Creek
The road up South Mineral Creek (Forest road 585) begins 2 miles west of Silverton on US-550 = Million Dollar Highway. The graded dirt road continues 4.5 miles west to South Mineral Campground.
The road usually closes after a lot of snow fall ~ late November.
The area is popular as an early ice climbing destination - low avalanche danger and you can basically drive to the ice climbs in November. Later in the season ice climbing here requires a long approach on skis and a high avalanche potential.
SP album of ice climbs in South Mineral Basin.
Just opposite the campground is a trailhead parking area for the approach to Ice lake basin. The lower basin is reached after a 2 mile climb - good camping spots in the wilderness. Another mile and 750 feet gain will bring you to the upper Ice lake basin. There is a turn-off below lower Ice lake basin for Island lake basin. This turn off was hard to spot in the past, but as of 2014 there is a nice sign.

Class: 2+/3  (list of Johns consensus is 3, I thought with careful route finding it could be 2+).
Distance: ~ 10 miles (depending which route you choose, and whether you combine this peak with other neighboring mountains)
As any mountain there are numbers of potential routes. I have attempted "V 4" once in the past, it was late in the fall (after U.S. Grant successful summit), but turned around since the north side was completely filled with fresh snow and I jogged in my running shoes (U.S. Grant was nice sunny and dry scramble, but "V 4" from the Ulysses S. Grant - "V 4" saddle was a snow climb).
The route I took up 2nd time was via Island Lake, Ulysses S. Grant and "V 4" saddle (very easy to scramble into the saddle, which is 13,220 feet high). I dropped about 50 feet down on the north side of "V 4" and took a very steep gully straight up after by-passing the first tower formation. This gully is filled with loose rock and both of us (me and Duchess) caused several rock avalanches. Take care if hiking in a group. Consider a helmet. The route finding appeared confusing, but since I have already scrambled on this peak before, I knew where to head. As mentioned above do not climb the first rock outcrops from the saddle but drop down. You would end up climbing 5th class rotten tower and then you would have to down climb this tower.
Once at the top of the loose gully, you can continue onto the south side of the peak and do a few 3 class moves to reach the actual summit. There are several summit blocks. I climbed 3 of them, just to realized that the first one was the highest one. I did built a little cairn on the summit.
Descent via Ice Lake: I took the steep loose scree straight down (south) towards Ice Lake., which looked incredibly inviting. I can't imaging this route being very pleasant it the opposite direction. It would require 1 foot up and 2/3 down technique. Again, we caused multiple rock avalanches here, so pay caution if having partners.
I think another option would be to take South-east ridge from Island Lake up. It looked like there would be a crossing of a very loose rock slide area just below the summit, but otherwise it looked relatively easy.
There are several steep couloirs on the north side, and I would imagine those could be very good snow/ice climbs.

There are no fees to visit Ice Lake, Island Lake or summiting peaks.

The easiest time to climb is the summer providing a relatively short approach (the road to Mineral Basin is closed in the winter), but as any mountain you can climb any time. I noticed a number of north facing couloirs which can be great snow climbs.