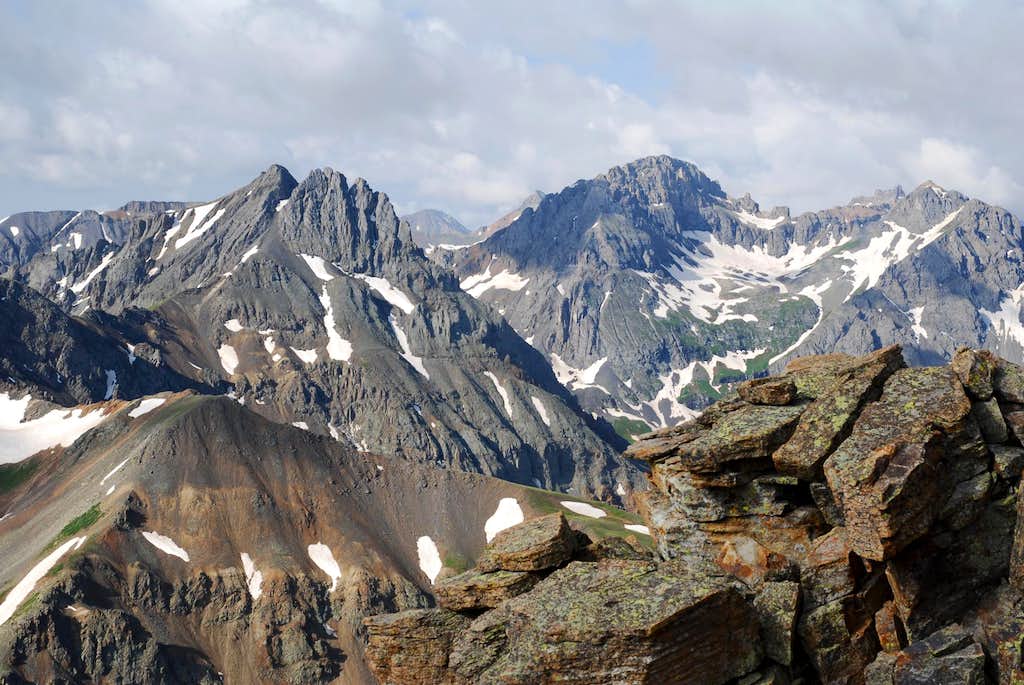 Ulysses S. Grant Peak (13,767-ft) resides in the dazzling Ice Lake Basin vicinity of the Silverton West Group, a magnificent sea of colorful and rugged peaks to the west and south of Silverton, Colorado. US Grant unites well with other notable peaks like Vermillion Peak, Pilot Knob, V3, 4 & 5, Lookout and South Lookout Mountain. All of these peaks share the same geologic likeness, and together they form one of the most beautiful areas of Colorado. From any orientation these peaks show brilliantly however one visit to the Ophir Pass, Ice Lake Basin areas and you will fall in love, and never want to leave.

US Grant Peak ranks in at 119 on the bicentennial, highest 200 list for Colorado and is one of nine bicentennials residing within the Silverton West Group. US Grant certainly looks like a huge mountain and seems like its own massif with shorter more elegant peaks like V3, 4 and 5 extending from its hulking mass. US Grant boasts four highly unstable, cliffed out rock faces, ribbed with steep; deeply inset scree-ridden couloirs. In addition, a mantel of rotten rock covers every ledge and occupies every nook and cranny. For you scree lovers of the world, my description may sound almost too rotten to be true!

Over the years, consistent mountaineering traffic has produced the only relatively safe standard route up the mountain, the southwest face route. Most notably the crux class 4+ headwall and summit gully have been cleaned up quite well however wearing a helmet is still a must. Combining V-4 to US Grant’s standard route makes good sense for those so inclined. Also, there are valid trip reports speaking of the possible traverse from US Grant to V-2. That traverse is only for those that feel the need to push the limits. I spent a good hour trying to make that traverse go until I finally gave up, not willing to down climb a scary loose wall of crud into a deep notch on the east ridge.

The Ice Lakes Basin is a popular place however it’s easily one of the most magical places in Colorado. It certainly deserves its own section here on this mountain page. It’s one of the few places I would consider hiking to and not actually climbing a mountain! The area is known for its wildflower supremacy during the 3rd to 4th week of July.

The lower Ice Lake Basin is clearly separated from the upper basin by a massive 400-ft granite wall. The upper and lower Ice Lake Basins differ greatly from one another and make for contrasting ecosystems. The wildflowers that grace the lower Ice Lake Basin are the tallest, and most densely packed I have ever seen. Columbines tower over waist high willows and delphiniums often brush your face. These plants seem to be genetically superior in every way compared to flowers in other mountain ranges.

The upper basin is comprised of small tarns, smooth granite domes, miles of alpine tundra and wildflowers and of course four magnificent peaks called Fuller Peak, Vermillion Peak, Golden Horn and Pilot Knob. Of course the waterfall from the upper to lower basin is cascading magic.

Island Lake Basin is an intimate place residing north of the Lower Ice Lake Basin and requires a 900-ft gain to reach its lower tundra ridden slopes. Somewhat of a secret place, Island Lake Basin harbors possibly the coolest alpine lake in Colorado. It actually has a spooky eyeball-ish look to it. The lake is a cross between emerald green and deep teal blue water that encompass a small rock island. Towering above the lake are great peaks called US Grant Peak, V2 and V4. BTW, the view from V2 is one of favorite views I’ve seen.

There are two starting points for the Ice Lake Basin area. The more popular Ice Lake Basin Trailhead begins at the South Mineral Creek Campground where there is ample parking. The second trailhead is an unmarked trailhead that starts at the first switchback on the dirt Clear Lake Road. This TH saves you about a half mile and 600-ft of gain.

Upper unmarked Ice Lake Basin Trailhead- High clearance vehicles can shorten the approach to Ice Lakes by using this trailhead. After leaving Hwy 550 go 3.5 miles to the signed Clear Lake road on the right. Drive the unimproved road a quarter mile to the first swtchback and park. There is room for maybe 4-5 vehicles. Some may have to park on the road. Locate the faint trail in the trees, it will first take you to an impressive water fall (more on this in the route section,)before intersecting the Ice Lake Basin Trail that starts at the S Mineral Creek Campground.

I hear the road to Clear Lake is good for high clearance (no need for 4wd) however should be avoided when or after it rains due to the steep and mostly dirt surface becoming slick mud.