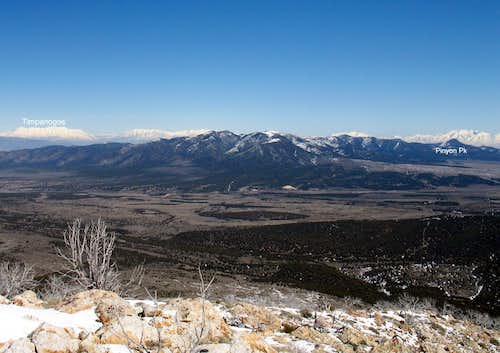 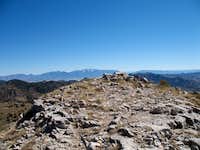 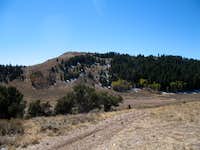 Boulter Peak is another of those peaks in Utah that doesn't see a lot of visitation by most climbers/hikers mainly because it is off the beaten track and is easily reached by ATV's and as in many Utah areas, ATV's and off road motorcycles are king. A 4WD high clearance vehicle could drive to within a couple miles (walking distance) of the peak whereas an ATV or dirt bike would take you the rest of the way.

Then why put this peak up considering it is not a popular peak nor attractive to most hikers and climbers? The answer is prominence. It comes in as the 69th most prominent peak in the state of Utah having 2188 feet of prominence. See this list for which peaks are the most prominent and this LINK for a description of what prominence is all about should you wonder what the importance of prominence is. I have found that prominence peaks often have spectacular views since they are the highest peak in a range although some are cursed with antenna farms and structures. Yet, the encroachment of man doesn't alter the fact that a prominence peak still commands a good view and should be respected.

I am a prominence buff and enjoy working lists but the advantage of doing this is that I get to see peaks and areas that I normally wouldn't even consider. Boulter Mtn is such a peak. It took me into an area I never would have even thought about going and provided me with another of those exploratory trips where I see things I wouldn't have other wise saw. For a great map showing the prominence peaks of Utah, click HERE.

Boulter Peak is the highest peak in the (east)Tintic Mountain range and while it is the highest, it isn't easily seen from the highways that service the area. It kind of hides behind other lower peaks and I really didn't see it for the first time until I topped a ridge that was about a mile away from the summit. The Tintic mountains had a lot of mining take place and the nearest town, Eureka, is still a mining town.

When I decided to do this peak, I also decided I wanted to hike it from the bottom, as if I had no 4WD vehicle. And walk it I did, a bit over 9 miles and 2600 feet (includes some ups & downs). It was a great choice and I felt that I truly "earned" this one. 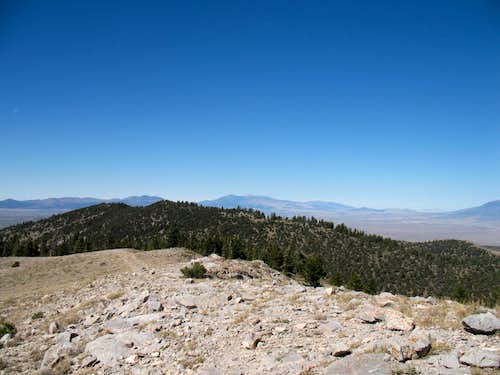 From I-15, take the Santaquin exit onto Highway 6 and go through the town of Santaquin and head west. You'll pass through a couple of small towns on the way before heading up into the Tintic range to the town of Eureka.
Go on through Eureka and connect up with highway 36, a bit to the west and head north, watching for mile post 13. After passing the milepost marker, watch for Black Rock Canyon road (35 miles from I-15. Turn east onto Black Rock Canyon road (well graded dirt/gravel surface) and drive 4.2 miles to where a rough 4WD road heads south. For those with normal clearance vehicles, I'd look for a place to park as you don't want to even think about taking your vehicle down the jeep /ATV road. From this point, it is about a 5 mile hike to the summit of Boulter Peak. For those who have high clearance vehicles you can drive further, aiming for this junction with the ATV/Jeep road that heads east into Mill Canyon.
While this road into the canyon is driveable, I am suggesting that you walk it for two reasons:
One - Exercise
Two - More meaningful. 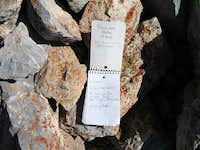 If you decide to park down in the flats outside of the Mill Canyon, it is best to walk down the road to the junction where a road comes in from another direction and joins the one you are on. Head uphill on the road and just follow it to a ridge that overlooks a dry lakebed. It is possible that this "dry" lakebed may have water in it from time to time but from the looks of it, that must be very seldom. When you get to the ridge divide, you will see Boulter Peak for the first time.

Head down the road and then just go cross country up the hill to the peak. A summit cairn contains a register and a geocache. The geocache is in a gray plastic box and blends in very nicely with the rocks. If you re a geocacher, you will enjoy the contents of the cache but if not, be sure to sign the register. I saw several familiar names in the little log book. John Vitz, Bob Martin, Jay Arden, Gordon MacLeod and Barbara Lilley and Richard Joseph. All the others who signed in were local people as far as I could tell. I have heard that the register has since disappeared and I don't know if anyone has put another one in its place.

My route covered 9 miles round trip and 2600 feet of elevation gain. I met one other person, he was on an ATV and was curious about me. I explained I was heading for Boulter Peak and he nodded and smiled. Probably thought I was another of those crazy hikers (he was right). Since I have climbed this one and posted this page, there have been others who wanted to do this one as well.

A local geocacher shared this with me:  "There are a number (and I do mean MANY) mountain lions in this area. Something to be cautious of."     I think that is good advice so be aware of your surroundings, best to hike this one with others along.

A couple others are listed on the climbers log at the left. 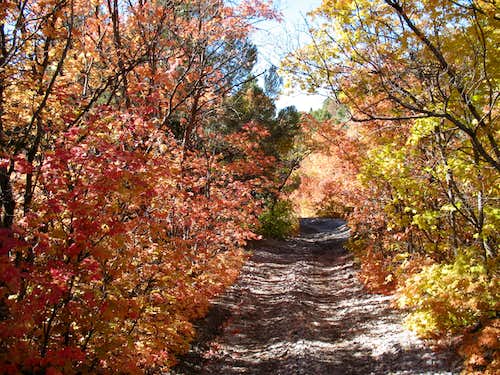 None that I am aware of but avoid crossing onto private property or mining claims as you encounter them. 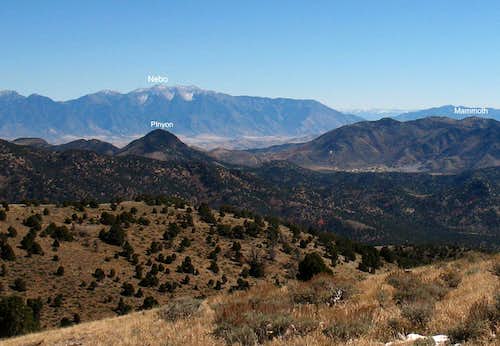 Nebo in  the distance

There are no regular campgrounds in the area but you can car camp pretty much anywhere in this mostly BLM area. Use common sense and "leave no trace" practices. NO water so bring all that you need.

Eureka and other nearby offerings

Eureka is an interesting place to check out as you are in this area.
Here are a couple links:
Eureka One
Eureka Two
Eureka Three (Wikipedia)

How to get there:
From Eureka, drive south on Hwy 6 for about 15 miles until you come to a good dirt road hearing east into the foothills. From Jericho Junction, drive north for about 3 miles to find the dirt road.

There may not be a sign on Hwy 6 indicating the turnoff so it is probably best to zero your odometer in Eureka.

Also nearby are the sand dunes in the Little Sahara area.
Check out this link for Info

The Pony Express Trail is also nearby. I'll add some links to these shortly.

I would expect that there might be some reasonable snow showing possibilities in this area in winter. I would assume that snowmobiles would be plying the roads and hillsides so it might not be an ideal place to go but perhaps on a weekday, you could find solitude as did I on a nice October day (a tuesday)

Fellow SP'er Eric Willhite did this hike with his two kids back in October of 2008. With two kids in tow, he smartly drove up the road about 3 miles and hiked the rest from that point. Eric has put up a very nice website where he is putting information up on many of the hikes and climbs that he has done including a section on hikes with children. You can find that here.

East Tintic North Group
Eric Willhite has put together an outstanding resource which I recommend to anyone interested in Boulter Peak as it gives you a great feel for the overall area. Click on "East Tintic North Group" For more great stuff, go to his home page, I think you will be impressed by what he is putting together. Eric, by the way is a SP member so take a moment and check his stuff out.