Briceljk (2346 m) is the highest peak of the Loška Stena array. Briceljk has two sides: the Bala/Bavšica Valley side where the standard ascent starts, and the Koritnica Valley side. The most famous view of Loška Stena is the one you get while driving down from the Predel pass towards Log pod Mangartom and Bovec. Upon reaching the village of Strmec, the view of Loška Stena - and especially the view of the Briceljk northwest face is striking. Routes on the northwest face are the tallest of the group, and among the tallest in the Julian Alps. The drop to the village of Log pod Mangartom is 1700 m - the rock face reaching 1100 m.

Since 1930 (Cesar-Comici) and until recently, ten routes were opened on the wall - some in winter. There are also a few alternates, as well as five ice lines on the pedestal. The famous hunter's route (Lovska smer, II-III, 1000 m) has been used throughout the centuries, as well as an ascent as a descent. Note that "Lovska" is also listed among climbs on Oltarji. It starts on Oltarji and next plays with the gully, the rib and the upper chimneys on the outer right of the Briceljk northwest face.

Even along the standard ascent, the Bala Valley side of Briceljk (the east face and the south face) is much less visible than the rock wall on Koritnica Valley side. In order to get a view of the Briceljk east face (SE), one needs to hike up the Bala valley a few hours towards the Čez Brežiče col, and for a better view of the south face, one must reach the Oltarji summit.

The standard ascent (Bala Valley) is an unmarked hunter's path that appears though in most maps. It is only recommended for hikers/scramblers well experienced with such paths. Cairns above tree line. If you are not experienced in path finding, consider appointing the services of a mountain guide. 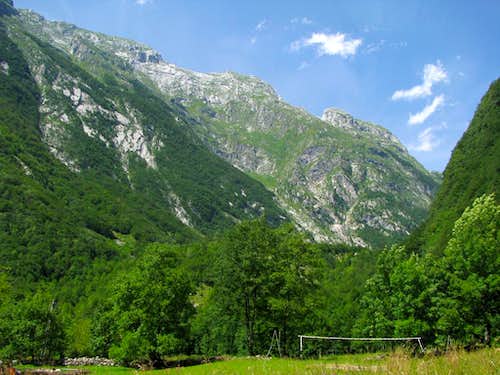 Briceljk
From the Bavšica trailhead, follow the marked and secured path through the Bala Valley up to the hunter's lodge (1300 m, water). The Briceljk standard splits W off the marked path at the lodge. The first 300 m gain is in the forest. After forest line, cairns indicate the way, leading N towards a now visible "gate" made of Stador to the right and of the lower south "buttress" of Briceljk to the left. Beyond the saddle, follow cairns and the trail up the scree (sometimes snow) still heading N, towards the right side of the Briceljk face. After reaching grassy slopes, turn left (W), now aiming at the notch in the SE ridge on the opposite side of the face. From the notch, turn right, heading N to the summit. The crux is the scramble up the rock and grass band above the scree (snow), not the scramble below the notch in the ridge.