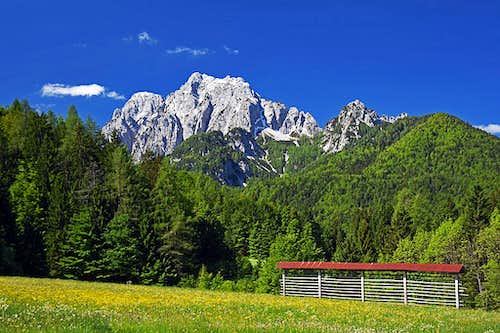 Visoka Ponca from the northeast 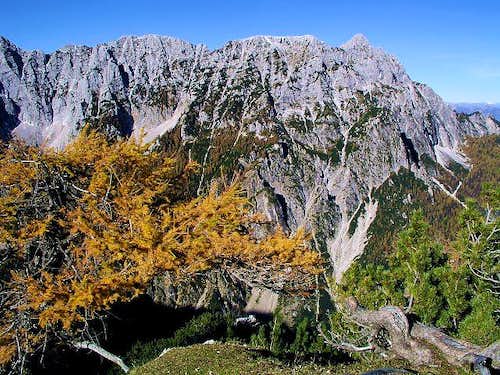 Ponce crest from the SE

Between Mangart and Jalovec from the Main Julian Alps crest a strong side crest goes towards the north. Attached to the main crest on V Koncu špica, 2350 m, it goes over the strong Vevnica, 2340 m, Strug, 2265 m, Zadnja Ponca, 2265 m, Srednja Ponca, 2228 m to Visoka Ponca, which is the last high mountain in this wall. More towards the north it drops significantly to Vratica notch, 1844 m, above which Mala Ponca, 1925 m, stands and then the crest gets lost in the woods above the upper Sava valley. So, the more narrow group is formed by three peaks (Zadnja=Rear, Srednja=Middle and Visoka=High), where the northernmost is the highest and most impressive one.

The name Ponca appears in Slovenian mountains in two cases - in both it is an abbreviation of 'poldnica', which means 'noon peak' - because in a certain village, in this case Rateče, the sun at noon is above that peak.

Below Ponca there are the sources of Sava river. It first comes out on the slopes above Tamar meadows, gets lost in sand and appears again near Rateče village in a beautiful marsh, called Zelenci. This part of Sava valley is protected as a small natural parc. So, while Planica valley, lying east of Ponce chain, belongs to Sava, then waters from western slopes gather in beautiful Belopeška jezera / Laghi di Fusine and then flow further to Ziljica and north into Drava river.

Another distinctive feature of Ponce and Planica valley is world wide known. It's a huge device for ski-flying, the biggest monster of its kind, where most of world records in the last years were achieved.

The summit can be reached by marked paths, which are not just easy. They require good fitness and some experience in high mountain terrain. On some rock sections these routes are secured with steel ropes and pegs. Although quite rocky, the walls of Ponca are not popular with those, who seek hard climbs. There are many easy climbs possible (up to degree III or IV), but for harder climbs the walls are not consistently solid, high and steep enough.

As said, from the east and south-east Visoka Ponca appears at the end of the long crest, coming from V Koncu špica. The slopes of the crest are steep, but also partly overgrown with dwarf-pines. Especially below the summit of Srednja Ponca, these slopes are not so steep. There the normal ascent from Planica valley comes up. 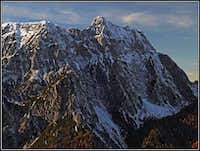 The eastern and north-eastern slopes are more wild. They are mainly rocky and no normal ascent goes there up. It was here, where a local guide challenged Julius Kugy if he can do the ascent up. Not because of being too hard as a climb, but because a narrow passage would be supposedly impossible for a strong man as Julius was.

The guy did the passage and sat on the other side, like somebody who bought the best seat in a theatre. But the show was short. Julius thought that if he had once won the bet to come out through a small window in Matterhorn hut, also this passage should not pose him a problem. Indeed he was through in seconds, continuing climbing and leaving the spectator to measure with eyes again and again the narrow passage and the big posture of Kugy. 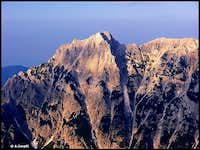 Velebit - From the west

The western side of Visoka Ponca is quite rocky. Also here a not so hard route comes up towards Srednja Ponca, but the rocks of Visoka Ponca are more powerful. Especially beautiful are they seen in the evening sun from Trbiž / Tarvisio and surroundings. No need to describe - see rather the beautiful picture of Saša on the left.

The ascent on top of this, otherwise less important summit, is appropriate for times, when high mountains are not accessible. But also this ascent is not just easy, on the summit part it requires easy climbing of UIAA I. The easiest ascent on top goes from Vratica, 1844 m, the saddle south of Mala Ponca, which can be reached either from the Italian or Slovenian side. The western approach is easier, because there are two marked paths, reaching to Capanna Ponza (2 h). From there we go towards the east on the saddle by an easy path - 30 min more. From Planica valley (from the east) we reach Vratica from the ski jumping center and over Grunt, or from Tamar by a more demanding hunters path (not marked). The final ascent on top does not follow the ridge from Vratica, but goes by the western side of it. You follow ciarns and the ascent requires some easy climbing. 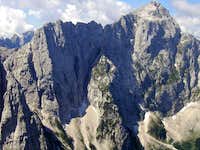 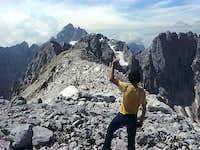 Due to its position, quite remote towards the north, Visoka Rateška Ponca is a perfect panorama mountain. From its summit the most beautiful view is towards Mangart, which shows its huge northern wall. Along the long Ponce crest the view goes to Jalovec at its end. Towards the south-east, above Tamar valley we have the northern walls of Mojstrovke and Travnik. Behind them the highest peaks of Julian Alps are rising. And towards the north the view is opened.

Currently the world record in ski jumping (better to talk of ski flying, which is really a special discipline) is 239 m (Bjoern Einar Romoeren, 2005). If we would choose a national sport in Slovenia, it would probably be ski-flying. Each year there's a competition on these devices (not every year on the giant one) and it's a special experience to climb after the competition the top of the biggest jumping device. Busses deep below are tiny, you can hardly distinguish people, and still, if you imagine, there are people, rushing down from this device in a few seconds.

I remember a few years ago, watching Eurosport with two English commentators, and the event was a team competition on the big monster (as the two said). In the team of Poland (who had at that time far the best man - Adam Malysz) on Friday one of four team members was injured or ill. And the coach simply called a young, 19-year old guy, who had never tried a big hill before. There's a huge gap between devices of 110 m and this one with more than 200 m. It meant: 'Son, get packed and come tomorrow to compete on the 200 m hill'. And one of commentators said: 'That was a tough phone call!!!' And the guy came, flew of course his personal best and decently helped the team. 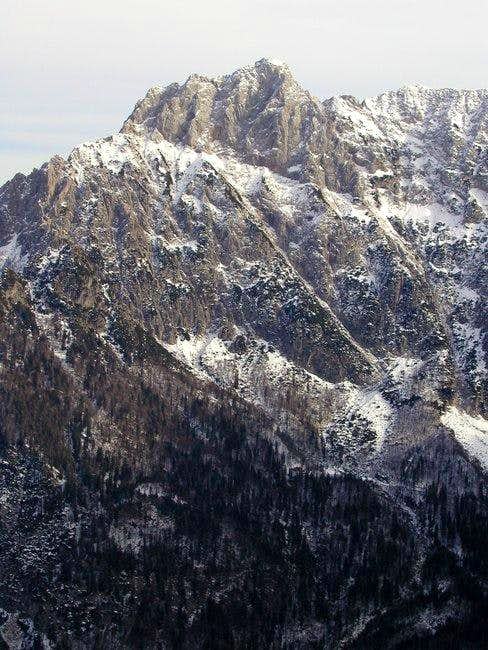 Bor - Visoka Ponca from the north 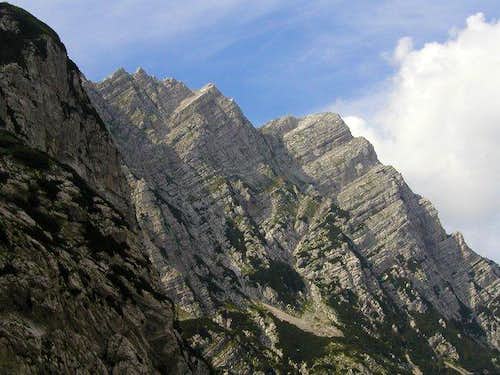 You start on the western side on the parking place by the upper lake. Take the marked path towards the south to the entrance of Via della Vita (ferrata). Climb Vevnica by the ferrata (hard). Continue by the ridge towards the north. Cross the whole crest - over Strug, Zadnja Ponca, Srednja Ponca to Visoka Ponca. Descent towards the west to your car. This is one of the most beautiful routes in Julian Alps (but only for experienced)! Difficulty of climbing non-protected passages is up to UIAA II degree. The tour would take you some 10 h. Even better site is wunderground - here's the direct link to Kredarica station, 2515 m (below Triglav summit).

The two useful huts are: