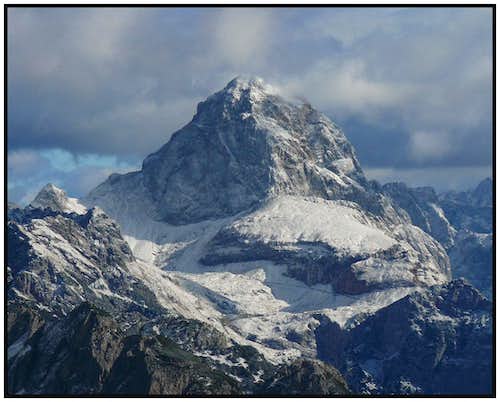 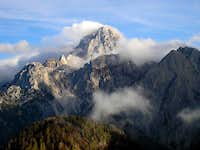 Mangart is one of the highest and most important mountains of Julian Alps. As a Lord of the Western part of Slovenian Julian Alps, Mangart with its huge massif separate NW part of Slovenia from NE part of Italia. Its huge north wall can be almost comparable with Triglav's north wall, it is not as high, but being around 3 km broad, it looks similar. The main mountain crest goes in east-west direction. Towards the southern, Slovenian side almost 2000 m high slopes fall in Koritnica Valley. Towards Italian side the north wall falls 1300 m towards the valley of Mangart Lakes. The narrow Mangart massif lies between Cez Jezik (notch, 2072 m) on west and Rob nad Zagacami (notch, cca 2250 m) on east. The whole massif has many less important peaks. Mali Koritniski Mangart / Piccolo Mangart di Coritenza (2333 m) on the very east side is important, because its north wall is especially steep, offering a challenge to the best climbers, who can find there the most difficult routes.

Because of a mountain road, which ascends to the altitude of more than 2000 meters, Mangart is very often ascended. 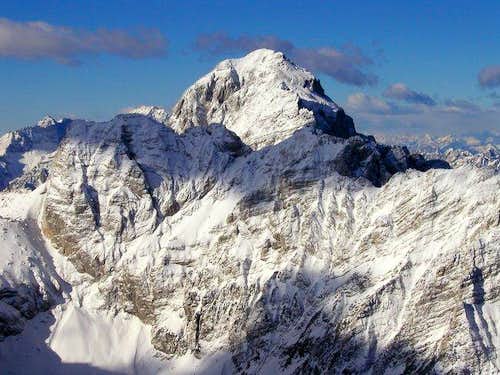 In the Heaven's Kingdom of Mangart 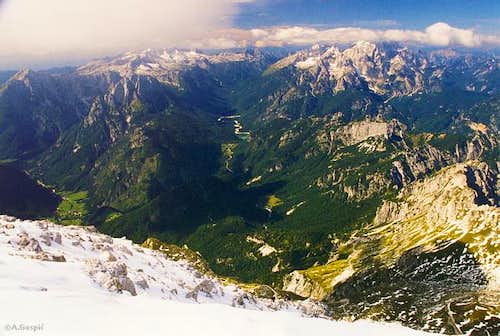 W summit view from the Mangart 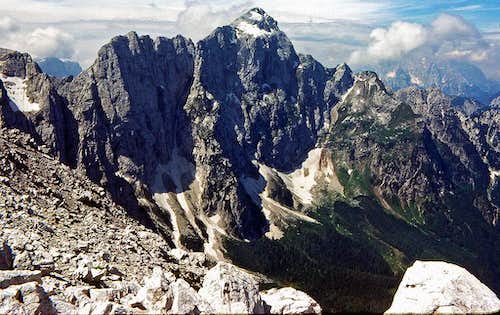 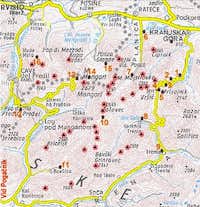 The map of Mangart's surroundings

Italian side is easily accessible by car. From the highway Villach - Udine you turn in Tarvisio eastwards - towards Slovenia. Arriving in Fusine you follow the road to Mangart Lakes (Laghi di Fusine, cca 900 m). By the lakes (beautiful scenery!) the road is closed for public traffic. From there you continue first by the road then by a marked path towards south.

Arriving from Slovenia, you follow the Soca Valley to Bovec, where you branch towards north into Koritnica Valley. You continue to Log pod Mangartom, a tourist village, which was recently totally destroyed by a huge landslip. It is renewed now, but you will see results of the demolition everywhere. Log can be a good starting point for hiking around, of course you can climb Mangart also from here, but the altitude difference is very high.

After the village the road turns west towards Predil Pass (border, 1156 m), but before you reach the border, you will notice a narrow road turning towards north-east. It will bring you from 1100 meters to 2000 meters, where the mountain hut can offer you a nice shelter. 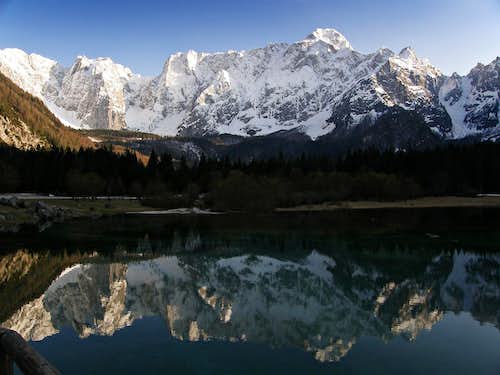 Predil Pass can also be accessed from Italian side. From Tarvisio you follow the valley towards south (Jezerska dolina, Valle Rio di Lago), at Rabelj Lake you turn east and drive up to the saddle. 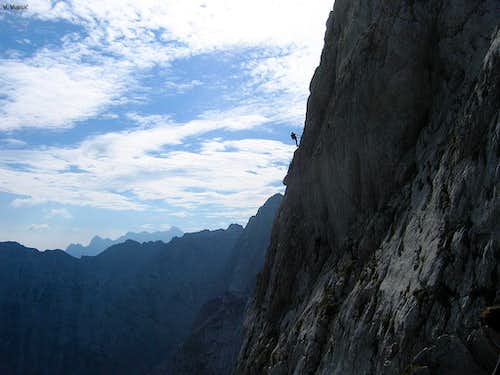 2. From Mangart Saddle - Italian Route. A marked path over the bands and upper north slopes. Only in a few places assured with ropes. Not difficult, but early in summer take care on snow fields (below them is a huge vertical drop). 1h 45 min.

3. East ridge. From Koritnica (alpine meadow, 1000 m) by a marked path towards Kotovo sedlo, then left over southern slopes of Mali Mangart and by the east ridge to the top. 5-6 hours, medium hard ferrata, ruined on some places.

4. From Rob nad Zagacami. From Mangart Lakes over Via della Vita to Rob nad Zagacami and further over Mali Mangart to the top. 7-8 hours. Difficult and very long ferrata.

5. Via Ferrata. From bivouac Nogara over the north wall to route #2 and to the top. 2h 30 min - 3h. May be the most difficult ferrata in Eastern Julian Alps, very exposed, but shorter than #4.

7. From Mangart Lakes over Cez Jezik to Mangart Saddle. This scree passage is not marked and is much better in spring when it is a beautiful ski tour. 3-4 h to Mangart Saddle, then continue by #1 or #2.

For climbing, especially the eastern part of the N wall is famous. It is called Mali Koritniski Mangart / Piccolo Mangart di Coritenza. The most known routes there are (info by Bor Sumrada and Gabriele Roth):

No limitations. The road to Mangart Saddle is open for public traffic, in last years it was a few times closed because of landslips.

Summer and autumn months are the best for climbing Mangart.

In winter and spring Mangart can offer also a few beautiful ski tours. But they don't go from the summit - skiing from the summit is a real alpinistic adventure. One "normal" ski tour goes from Mangart Saddle down through Cez Jezik passage and to Mangart Lakes. The other one (when snow conditions on the southern side are good), goes from Mangart Saddle towarsd south.

On Mangart Saddle there is a mountain hut - Kocha na Mangartskem sedlu, 1906 m.

Beneath the north wall there is a Bivouac Nogara on the altitude of 1850 m.

There are also camping places by Rabelj Lake and by Mangart Lakes. Thanks Yatsek! But I can't correct it :( It really behaves strangely. The picture appears in the previous chapter and

Kocha na Mangartskem Sedlu & Mangart
appears in the next one, showing no picture. Hm?

Have you tried (br clear=all) (inside angle brackets instead of round) at the end of the previous chapter?